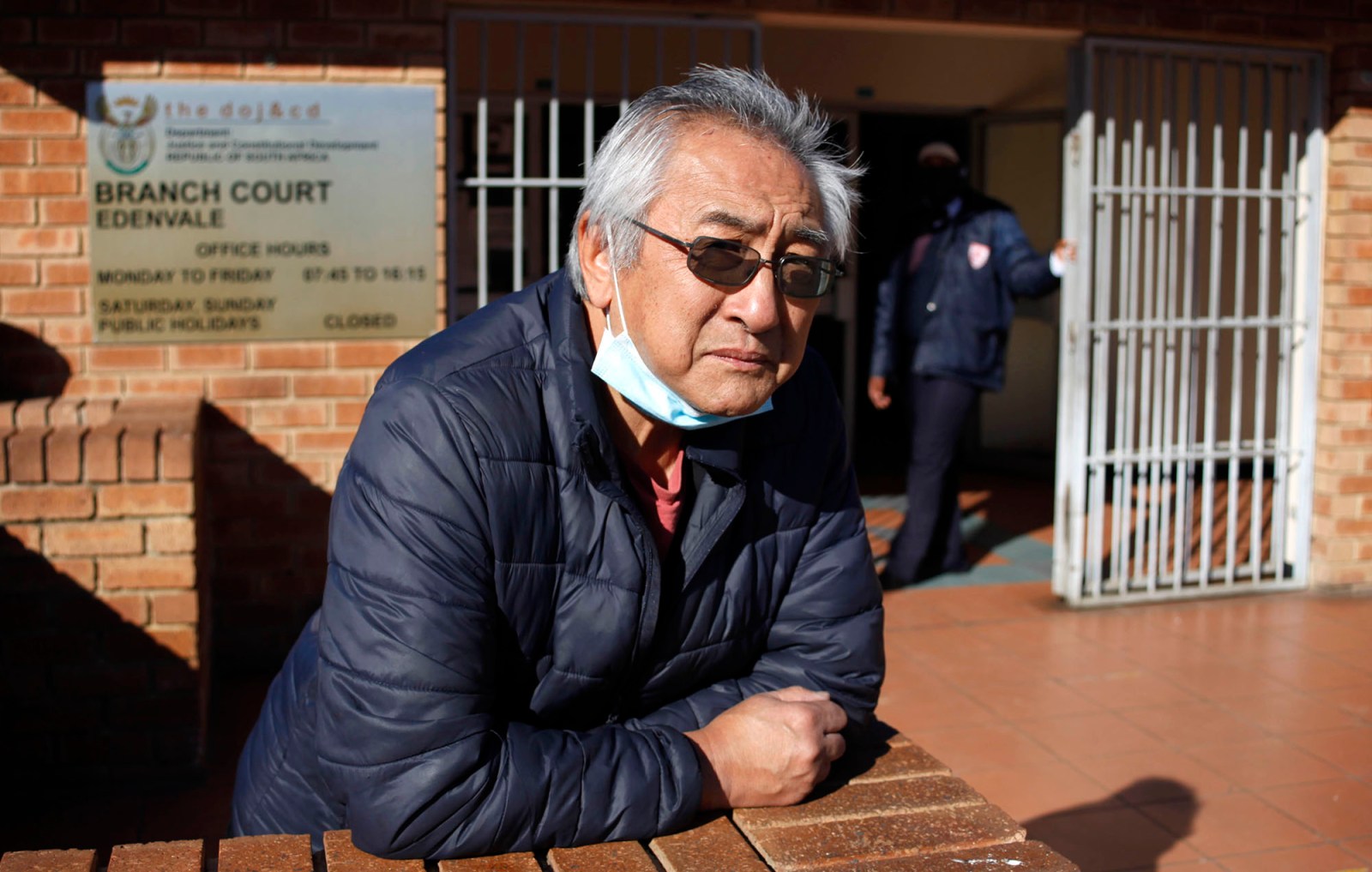 Dr Ivan Jardine at the Edenvale Branch Court in Edenvale, Johannesburg on 19 July 2021. Jardine was on an emergency call and was arrested for breaking the curfew. (Photo: Oupa Nkosi)

Dr Ivan Jardine is an ear, nose and throat (ENT) surgeon of 30 years standing based at the Bedford Gardens hospital in Johannesburg. He is part of essential medical services responding to the debilitating third wave of Covid in Gauteng. At 10.00 on Monday morning, however, he was not on duty at hospital. Instead, he was amongst drunken drivers and people accused of petty crimes at Edenvale Magistrates Court waiting his turn to plead before a magistrate.

The charge Dr Jardine had to answer for is “Contravention of Disaster Management Act … failure of a person to confine between 21.00 and 04.00.” The motive for his sin — responding to an emergency medical call.

Giving his account of what happened, Dr Jardine told Maverick Citizen that he was called by relatives to assist his aunt, who was bedridden and dehydrated, on Friday night. Earlier attempts to get medical care for her had been unsuccessful. Other members of her family were Covid+, in isolation and unable to assist. Left alone for the night she would have been in danger.

As a result, Dr Jardine said he got in his car and drove 40 mins from Kensington to Quellerina, assessed her, attached her to a drip and after being sure of her health and safety, started to drive home.

However, home was not where he ended up.

Dr Jardine said he was stopped by a police car with two policemen in it near Eastgate shopping mall. He admits that he didn’t have his doctor’s permit. However, he explained to the police that he had been responding to an emergency and offered to go with them to his office nearby to provide proof that he was a doctor. He also called his hospital to provide proof to the police.

The police were not interested, he said. Instead they “threatened to pull me out of my car and arrest me.” Fearing for his wellbeing he agreed to drive behind them to the Bedfordview police station. As he followed them, he said the police at one point turned into a dark road that was not the route to the station. Worried about their motives he continued straight on. “I took the road I know.”

At the police station he was put in holding cells with five other people where he remained until 8am on Saturday. “We were in a 3×4 cell. There was no social distancing possible and no sanitiser,” he says, adding “it was cold but luckily I had a thick jacket.”

Jardine says his cell-mates included three members of a local Community Policing Forum who told him they had been on patrol when they were arrested. Another was a man whose car had broken down and whose brother had arrived to assist him. Both were arrested after the curfew hours kicked in.

During the night the police offered him  R2,000 bail, but Jardine had only a credit card. As a result he could only pay bail when a friend arrived with cash at 7am the next day.

Dr Jardine is keen to point out that not all the police behaved like the arresting officers. “The police at the police station were very good. They didn’t want to be tarred with the same brush.”

However, Dr Jardine is aggrieved and angry. Permit or no permit, he believes he was wrongfully arrested because in fact the Level 4 Disaster Management Regulations (under Section 17 (1)(b)) do not require permits for people who are “attending to a security or medical emergency”.

They read as follows:

(a) has been granted permission through directions issued by the relevant Cabinet member or a permit, which corresponds with Form 7 of Annexure A, to perform a service other than a service related to an activity listed under Table 1;

(b) is attending to a security or medical emergency; or

(c) arrives on a flight or is travelling to or from an airport which necessitates travelling during restricted hours of movement: Provided that the person travelling is in possession of a valid boarding pass as proof of flight or a copy of the airline ticket.

(2) Any person who fails to abide by the curfew referred to in subregulation (1) commits an offence and is, on conviction, liable to a fine or a period of imprisonment not exceeding six months, or to both such fine and imprisonment.

In response to questions from Maverick Citizen, Captain Mavela Masondo of Gauteng SAPS  said: “It is the NPA that is commenting on cases that are already in court.” The NPA did not respond to a request for comment.

However, just before going to press the following response was received from Colonel Noxolo Kweza, the spokesperson for the SAPS in Gauteng. Col Kweza’s version departs even from the facts alleged by Jardine. She says he was with another passenger (which he denies) and that he was dressed “in civilian clothes” (he says he was in scrubs).  As justification for the arrest, Col Kweza added:

“The regulations including the change in the curfew time were introduced by President Cyril Ramaphosa and apply to everybody including doctors and police officers. Essential workers are expected to have a permit with them all the time, especially after curfew. And this is the case until it is changed by the President. And if you do not have the permit, police officers will arrest you. Police officers are not expected to accompany you to your home or surgery to go get or print your permit.

“Those that fall in the category of essential workers such as the doctors need to have this permit and their identity documents as this is a way of indicating that they are who they allege to be. And the permit has to have contact details for verification purposes should there be a need.

Based on the above, it would appear the police do not understand their own regulations.

Anecdotes abound with allegations of unnecessary or possibly unlawful arrests. By mid-June over 465,000 people had been arrested under the Disaster Management Act. But basically, that’s one arrest for every four confirmed cases (currently 2,302,304) of Covid.

Jardine says that he wants to challenge President Ramaphosa over the conduct of the police: “They can’t dictate what doctors must do in an emergency. What would have happened if I had been stopped on the way to an emergency (rather than coming back)? I told the police I’ll do it again in a heartbeat — even if I can’t find my permit.”

As news of Jardine’s arrest spread amongst healthcare workers, many were angry. Others told of similar experiences on Twitter. A statement released by the SA Private Practitioners Forum called for an investigation into the conduct of the police officers and an apology to Dr Jardine.

In the Edenvale Magistrate’s Court on Monday, the case was postponed until August 5. DM/MC

Members of the public who have complaints about the police or who have encountered police corruption, abuse or misconduct are encouraged to report it on www.veza.org.za, an open data tool established by Corruption Watch that maps instances of alleged unlawful behaviour by the police and allows people to rate police stations and access information about their local police.