Supply chains are ‘largely back on track’ as Depart... 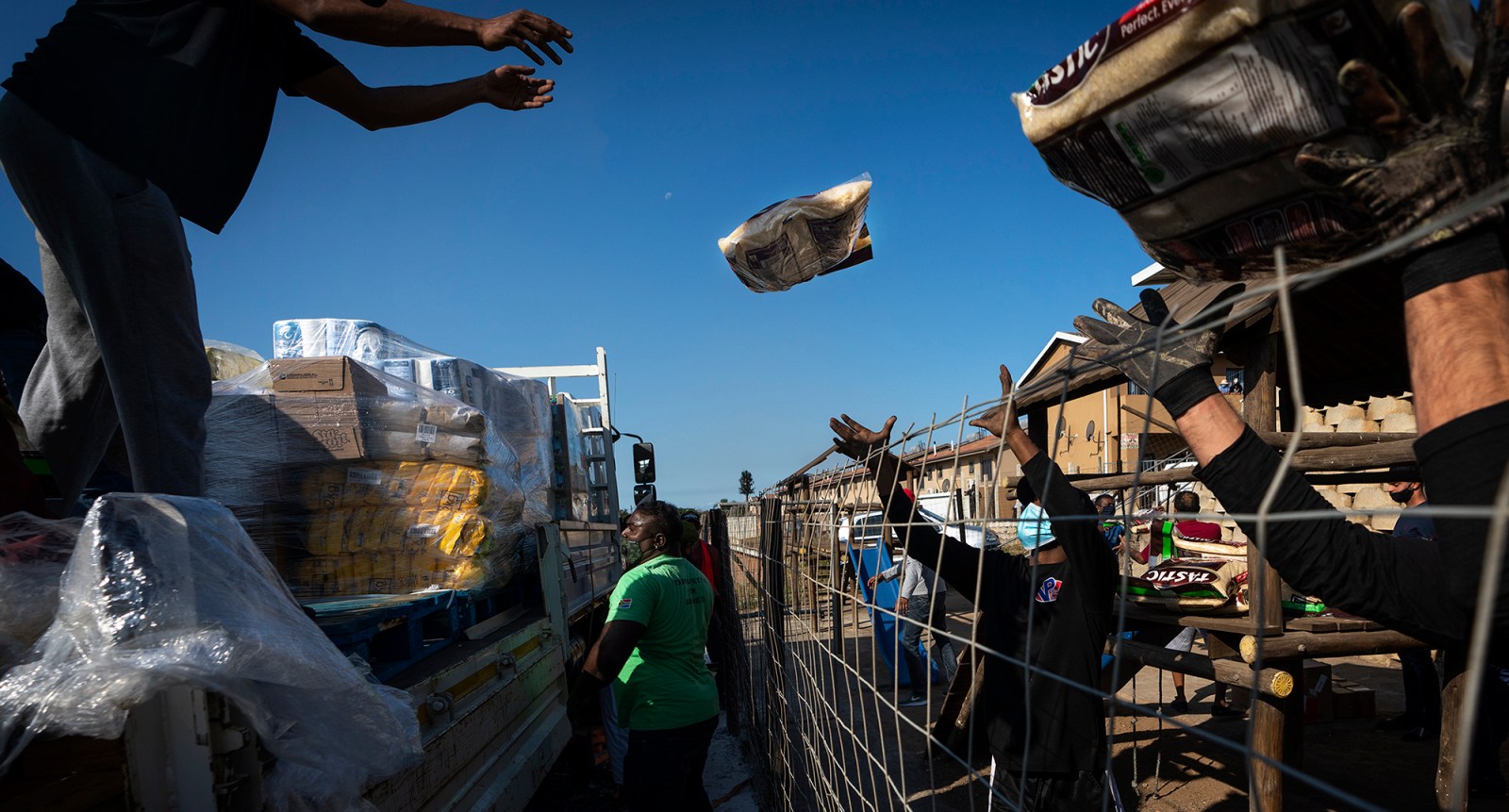 Volunteers throw bags of rice over a fence as they offload a truck filled with food and other essential items at an islamic centre in Phoenix, Durban, Sunday, 18 July 2021. Various communities of Gauteng rallied together to provide relief for Kwa Zulu Natal residents following the violent unrest. (Photo: Shiraaz Mohamed)

The bottom line is that goods are getting to market, which is one of the starting points for a functioning economy in the 21st century.

The Department of Trade, Industry and Competition said on Monday that supply chains for food and other products “are largely back on track” after last week’s riotous destruction and looting. And while the department has a penchant for making rules, it has actually relaxed some to allow the links in the supply chain to join up.

The department said in a statement that: “Large retail chains have reported that supply of food and other products to South African stores and neighbouring states, affected by disruptions in supply-chains in KwaZulu-Natal, are largely back on track.

“South Africa’s three largest retail groups, with stores throughout the region, noted that disruptions were mainly the result of the pressures on the N3 corridor from the Durban port and interruptions in supply from factories in KZN,” it said, without naming the retailers.

It further noted that the crucial N3 highway had been functioning normally since Sunday morning and that 100 trucks per hour were passing key checkpoints on it.

The bottom line is that goods are getting to market, which is one of the starting points for a functioning economy in the 21st century.

“The Minister of Trade, Industry and Competition, Ebrahim Patel, had also issued an exemption from certain provisions of the Competition Act, to enable firms to collaborate and ensure availability of basic food and consumer items, emergency products, medical and hygiene supplies (including pharmaceutical products), refined petroleum products and emergency clean-up products,” the statement said, without elaboration.

Patel has a reputation for being a control freak of note and so for him to issue an exemption to rules painstakingly constructed by his mandarins underscores the gravity of the situation.

“The immediate focus is to get the supply of food, medicine and basic goods to KZN cities and towns speeded up. Key raw materials and components are being prioritised. The response of manufacturers and retailers has been very positive to efforts to rebuild the productive sectors,” the statement said.

So despite this monumental episode of state failure, things are moving again, which is only to be welcomed. Still, a strong whiff of flatulence hangs in the air. This is a government whose pronouncements are often only useful for a certain kind of organic fertiliser that emerges from the bowels of cattle. DM/BM