The Pietermaritzburg High Court on Monday heard just under four hours of argument on whether a postponement was necessary so that former president Jacob Zuma could be physically present in court to give evidence during his special plea application in the arms deal corruption case, in which he is being tried alongside French arms manufacturer Thales.

Jacob Zuma said in his papers, filed over the weekend, that he wanted to be present in court for his trial, as was his constitutional right, and that a virtual platform would infringe on this.

Zuma was following proceedings via an audiovisual link from Estcourt Correctional Centre.

Presiding officer, Judge Piet Koen, had issued a directive saying the special plea application, which was set down for Monday, should be held virtually.

The state argued that there was no justification or necessity for the special plea to be argued orally, and that a virtual platform was “legitimate, lawful and appropriate” for the determination thereof, using papers already submitted. 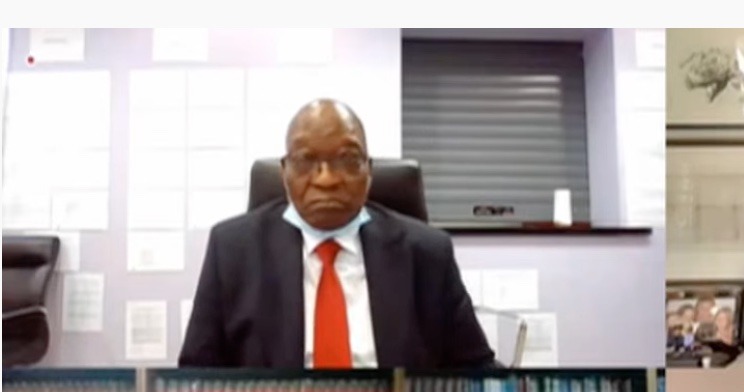 Zuma was yet again seeking to delay proceedings, said advocate Wim Trengove for the National Prosecuting Authority (NPA), and his application for postponement should be dismissed.

“We proceed on the basis that if you find oral evidence is necessary, then we will have that process on another day. At the moment, we seek to persuade you that oral evidence is not necessary or admissible in support of the special defence, therefore there is no need for a postponement as the matter can be deduced and determined today,” said Trengove.

Many of the lawyers involved in the case are based in Johannesburg. Travel to and from that province is currently temporarily banned in terms of Covid-19 restrictions. Zuma’s physical appearances at court tend to attract crowds of supporters. Large gatherings of any sort are also temporarily banned due to Covid.

The former president has been behind bars after being taken into custody in the early hours of 8 July for being in contempt of a Constitutional Court order that he testify at the Zondo Commission. He was sentenced to 15 months imprisonment after being convicted of contempt. His application for rescission of judgment was heard by the same court last Monday, and judgment was reserved.

Zuma was represented on Monday by senior counsels Dali Mpofu and Thabani Masuku. The latter, responding to Trengove’s opposition to a postponement, said the trial being postponed by three weeks would make no difference to any of the parties, as the former president had already been walking this road for “15 years”.

“A virtual hearing in criminal matters is an exception,” said Masuku. “In other words, it constitutes a limitation on the scope of the rights that an accused person is entitled to under Section 35 of the Constitution. Therefore, it must be justified in terms of section 36 of the Constitution. That is very important, because you have to ask yourself, with respect, whether a directive that a critical aspect of a plea, that may well result in the acquittal of the accused, is in fact heard in his physical absence.”

He asked Koen to confine himself to deciding if the criteria for a postponement had been met.

Monday’s hearing played out against the backdrop of devastating unrest in parts of KwaZulu-Natal. The defence force was eventually mobilised to quell widespread looting and arson attacks on trucks, malls, public infrastructure, warehouses and factories.

What President Cyril Ramaphosa described as an “insurrection” is believed to have started with protests calling for Zuma to be freed, and which subsequently escalated into widespread mayhem that may cost the provincial economy in excess of R16-billion.

Through his special plea, Zuma is seeking to have veteran prosecutor Billy Downer removed from the Arms Deal trial on the grounds that he lacks impartiality and has no title to prosecute. The former president believes that should he be successful, he will be entitled to an acquittal. The state has dismissed this, saying that there are others who can prosecute Zuma.

“The accused has, for more than 10 years, taken every point in the book to avoid having his day in court. He desperately seeks to avoid answering the charges of corruption, fraud and money laundering against him. He raises objections again and again. The objections raised today were objections which were raised and decided against by the Supreme Court of Appeal in the spy tapes case and by the full bench [of the Pietermaritzburg High Court] in [Zuma’s failed bid for a] stay of prosecution,” said Trengove, describing Zuma’s latest application as “Stalingrad Season 27”.

Audio-visual proceedings were legitimate, said Trengove, and were a lawful way of optimally conducting court business, as per a directive issued by the ministry of justice pertaining to alert Level 4 regulations.

“The hearing of this debate, on a virtual platform, is a public hearing to which the public have access, and in the presence of the accused. He is present on the platform.

“With respect, it is a competent mechanism… it is an appropriate mechanism, it is one that the court is not merely entitled, but, I submit with respect, obliged to adopt, in the exercising of its discretionary powers to ensure fairness is done, not only to the accused, but also to the public interest in the prosecution of any serious crime, but particularly in the prosecution of corruption, fraud and money laundering.”

There had been no prior talk from the former president of giving oral evidence, said Trengove, and even now, he didn’t want to orally adduce his own evidence.

“On the contrary, what he demands when he speaks of oral evidence is an opportunity to cross-examine Mr Downer and a variety of other state officials. And he does so again and again. He is unable to refute Mr Downer’s evidence and those of the witnesses supplying Mr Downer. It is a symptom of [Zuma’s] failure of his recognition to make a case that he now resorts to a request for a referral to oral evidence.”

Koen reserved his ruling until 10am on Tuesday, saying that it would “probably not come with reasons” yet.

Zuma is accused of receiving 791 payments, totalling R4.1-million, between 1995 and 2004 from his former financial advisor Schabir Shaik and Shaik’s companies, to help Thales, accused number two, secure lucrative defence contracts from the government as part of the country’s 1999 multi-billion rand armaments deal.

Thales is facing one count of racketeering, two of corruption and one of money laundering. DM