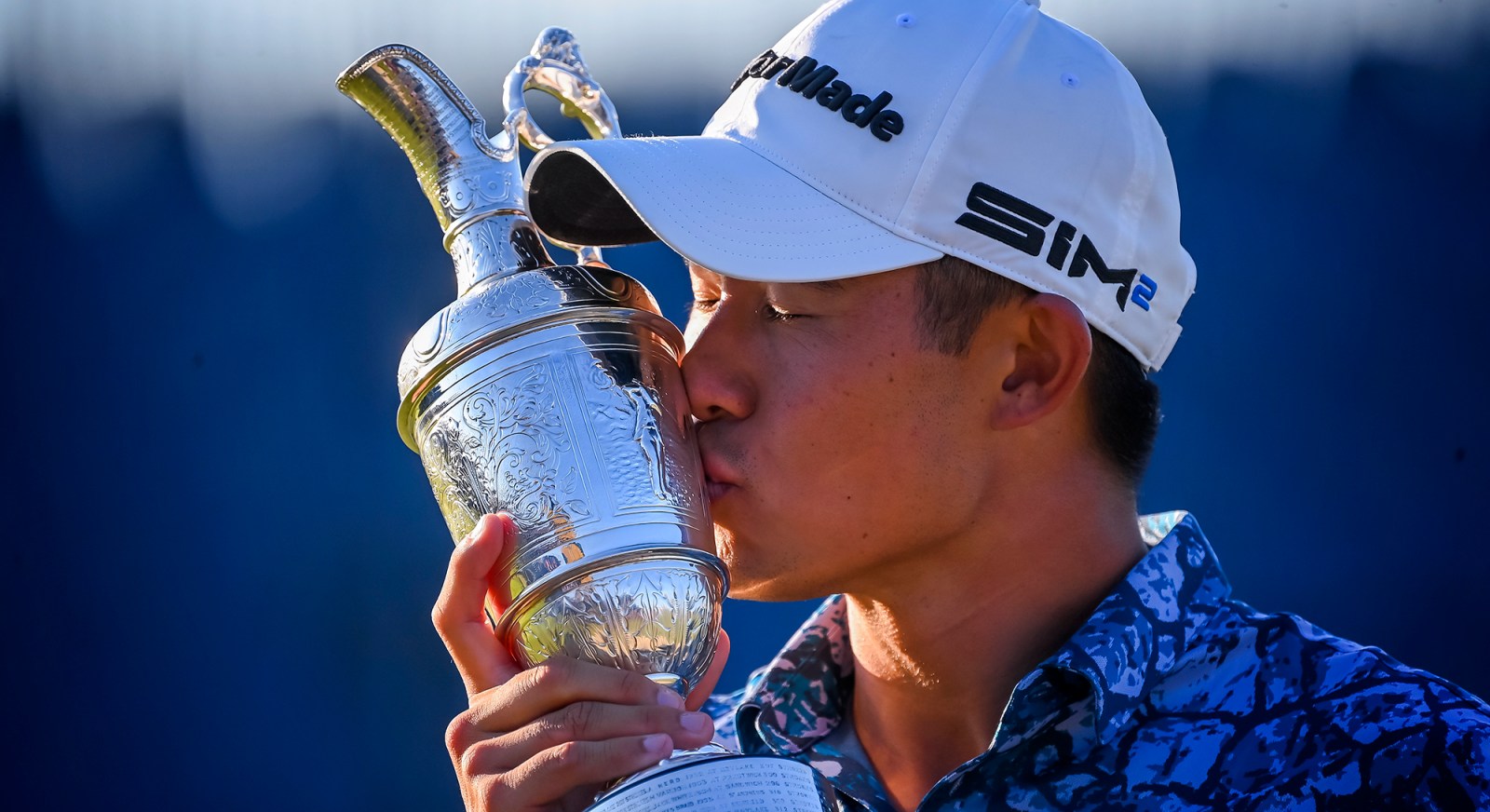 Collin Morikawa won his second major in only his second year as a professional as South Africa’s Louis Oosthuizen saw another gilt-edged opportunity slip away.

US debutant Collin Morikawa produced an ice-cool final round to win the Open Championship by two strokes on a blazing hot afternoon at Royal St George’s on Sunday.

The 24-year-old began the day a stroke behind South Africa’s Louis Oosthuizen but played picture-perfect golf in a four-under round of 66 to resist resurgent fellow American Jordan Spieth in a three-way battle.

Morikawa barely missed a fairway all day as he made four birdies and dropped no shots, showing incredible composure late on as Spieth applied pressure down the stretch.

He never looked like cracking though and his fourth sub-par round of the week saw him finish on 15-under 265 — his remarkable consistency born out by the astonishing statistic of only four bogeys all week.

Spieth, who was bidding to win his fourth major and first since the 2017 Open, started his final round badly with two bogeys in his first six holes but an eagle at the seventh launched a gallant chase of Morikawa.

The packed galleries, enjoying a memorable finale after last year’s cancellation, roared on Spieth but despite a return to his best, he was unable to catch Morikawa, finishing 13 under, left to rue his bogey-bogey finish the night before.

Oosthuizen ended in a tie for third with Spain’s US Open champion, Jon Rahm, four shots back after a storming finish.

Oosthuizen led from round one and posted the lowest-ever Open total for 36 holes but wilted and finished with a one-over 71.

Morikawa had the luxury of a two-shot lead as he teed off from the 18th tee before striding down the fairway and two-putting for a victory that never looked in doubt to become the first player to win two majors on debut, having also claimed the 2020 PGA Championship.

“This is by far one of the best moments of my life. Look at all these fans, let’s hear it for you guys,” Morikawa said after receiving the Claret Jug.

“To see some of the best crowds I have ever seen, I’m looking forward to making my trip every year.”

The last debutant to win the Open was American Ben Curtis in 2003, although whereas Curtis was ranked 396th at the time, Morikawa is the world number four.

He only turned pro in 2019 but the University of California graduate has now won two of his first eight majors.

“I’ve had belief in myself since day one that I turned professional. I do my homework Monday to Wednesday to make sure I know what I need to do,” he said.

The finale to a riveting 149th Open was beautifully poised as clear blue skies and light winds provided the perfect conditions for a duel under the sun.

Morikawa collected six successive pars to climb into a share of the lead after Oosthuizen bogeyed the fourth.

Spieth bunkered his tee shot at the par-three sixth and dropped his second shot of the round before an eagle at the seventh flicked the switch.

Morikawa tapped in a birdie at the seventh, but for playing partner Oosthuizen that was where everything went wrong.

His second shot went into a greenside bunker, his third into another bunker, before flying his escape across the green, eventually limiting the damage with a bogey six.

That put Morikawa two shots clear and he turned the screws with birdies at eight and nine to briefly go four clear.

Spieth was not giving up the chase but Morikawa was nerveless, saving par on the 10th with a long putt.

Oosthuizen briefly came alive with a birdie at the 11th after almost holing his tee shot, but Morikawa was relentless.

His poor shots were as rare as trees on the coastal links, and even when he did play one, as he did with his second to the 15th, nothing could knock him out of his stride.

With Spieth just two behind, Morikawa was in trouble in the rough next to the downward sloping green, but the Californian made a sensational up-and-down to save par and he kept Spieth at arm’s length thereafter.

“I needed a break, and I didn’t get it from [Collin],” Spieth said. “I did all I could. So I’m upset because I really felt like I played well enough to win and made a couple of really dumb mistakes that possibly, if I had maybe played the week before, wouldn’t have made.”

American four-time major winner Brooks Koepka carded the day’s joint best score, a 65 taking him to a tie for fifth while his arch-rival Bryson DeChambeau ended an eventful week with a 65 also, although he was never in contention.

Shane Lowry’s admirable defence of the trophy he won in 2019 saw him finish in a tie for 12th after a final round 69.

Oosthuizen suffers another near miss

Oosthuizen was left to rue yet another near-miss at a major championship after finishing tied third.

When he destroyed the field to win the 2010 Open at St Andrews by seven shots, Oosthuizen looked to have the golfing world at his feet, but a second major title has eluded him.

Oosthuizen, 38, has finished runner-up six times, including at this year’s PGA Championship and US Open, and he endured another disappointing final round of 71 at Royal St George’s to fall short once again.

The South African had started his challenge at Royal St George’s with sublime rounds of 64 and 65 and after a solid 69 he led the field by one shot.

Oosthuizen looked flat during the final round, however, visiting two different bunkers on the way to a bogey at the par-five seventh hole as his playing partner Morikawa started a run of three successive birdies that set him up to win the title.

Oosthuizen dug deep to birdie the 11th hole, his tee shot hitting the flag before he sank a 2m putt.

Another birdie followed at the 14th but the South African could only match Morikawa’s pars at the last four holes.

One of the best ball-strikers in the game, Oosthuizen exudes an air of quiet efficiency on course, calmly plotting his way round and rarely showing his emotions.

Although he never looked happy on Sunday, Morikawa enjoyed playing with him.

“Louis is an outright amazing player and person,” Morikawa said. “He’s just a great guy to play with. It’s nice to see another guy just stripe it down the middle.

“Louis is consistent, he really is. He’s going to keep knocking at these doors, and I’m sure he’s going to knock a few more down. He’s just too good.”

Oosthuizen will get another chance when St Andrews is the venue for the 150th British Open next year and he will hope to evoke memories of his 2010 triumph to end his long wait for another major victory. DM