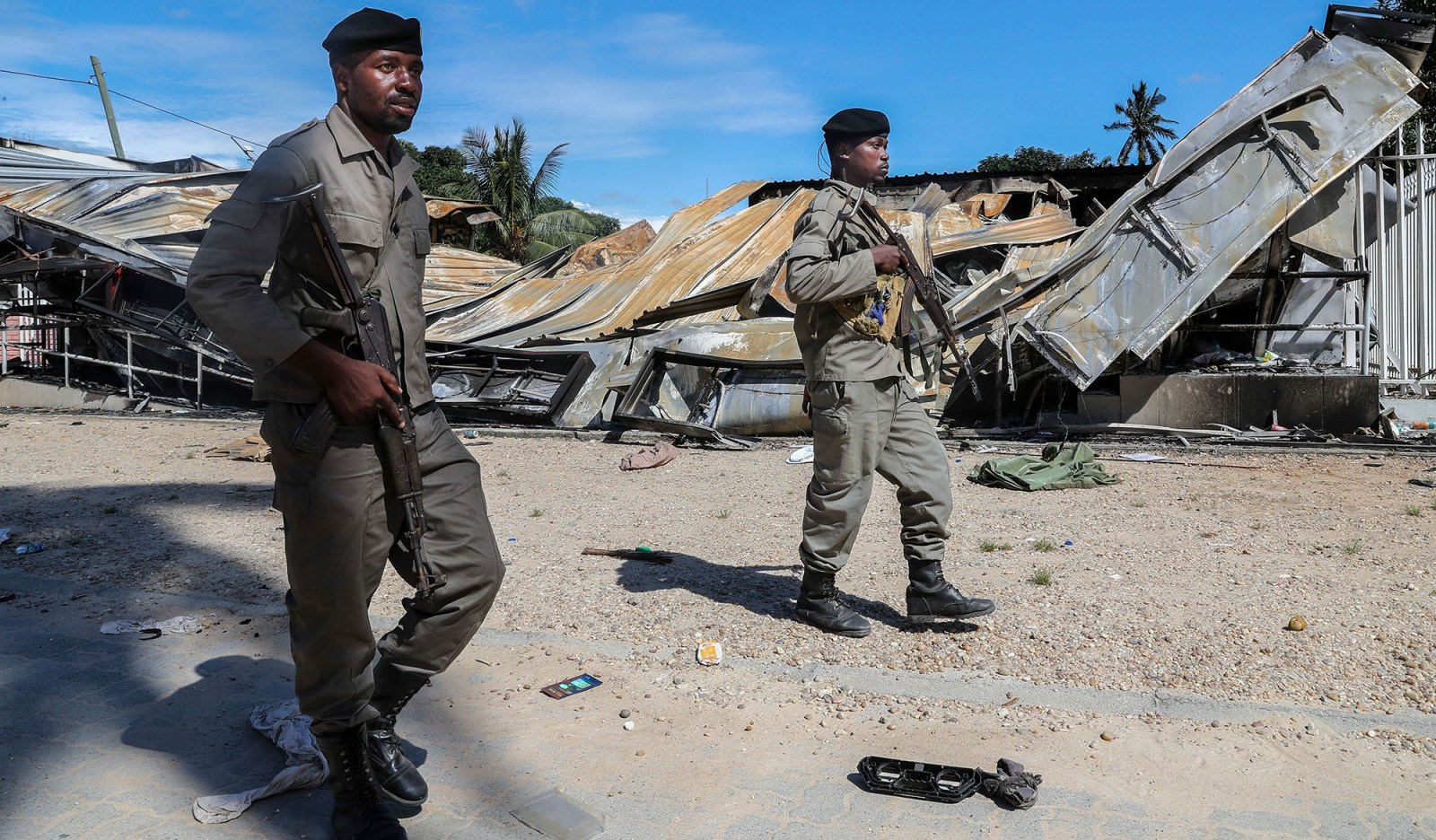 Mozambique army soldiers pass a destroyed building during a patrol on the streets of Palma in Cabo Delgado on 9 April 2021. (Photo: EPA-EFE/JOAO RELVAS)

The arrival of Rwandan soldiers in Cabo Delgado has drawn harsh criticism from opposition parties and rights organisations.

Rwanda has sent 1,000 soldiers and police to conduct combat and security operations in Mozambique’s gas-rich northern Cabo Delgado province. The area has been hit by terrorism and violent extremism since 2017.

The deployment came a few weeks after the Southern African Development Community (SADC) announced it would send a Standby Force to support Mozambique in combatting the insurgency. SADC’s troops were scheduled for deployment on 15 July — a week after Rwandan forces began landing at Nacala Airport, south of the province.

So far, no SADC soldiers have arrived in the country. On 17 July, the organisation’s executive secretary Dr Stergomena Tax presented the instruments of authority for its Standby Force to the Mozambican government.

Rwanda emphasised its Joint Force would work closely with SADC’s troops. Nevertheless, Tax said it was “unfortunate” that Mozambique didn’t officially notify the bloc that Rwanda would be dispatching troops. She said deployments should be in line with SADC guiding instruments, and this could only happen after the regional body’s forces were in place.

Some analysts believe the Rwandan army is much better trained, experienced and disciplined, has the necessary capability, and can get the job done quicker than a multinational force. “Rwanda is third among countries contributing troops to [United Nations] peacekeeping operations and has been involved in 14 peacekeeping missions,” political analyst Joseph Hanlon wrote last week.

The Cabo Delgado conflict has led to over 3,000 deaths and caused more than 800,000 people to be internally displaced. The violence is continuing despite reports that security forces are resisting the insurgents.

The Rwandan deployment is seen by the Mozambican public, rights organisations and political parties as following the same pattern of secrecy used to send private military companies to Cabo Delgado. As did mercenaries from the Russian Wagner Group and the South African-based Dyck Advisory Group, the Rwandan military landed in Mozambique without Parliament being notified. Mozambican taxpayers were not informed about the objectives, duration or costs of the mission.

Maputo didn’t confirm Rwanda’s deployment until 9 July, when President Filipe Nyusi announced the arrival of the troops at parades with the local military and militias in his homeland in Mueda. However, he provided no details about the mission.

Ossufo Momade, leader of Mozambique’s biggest opposition party, the Mozambican National Resistance (Renamo), which supports SADC’s military mission, immediately opposed Rwanda’s intervention. He said it was illegal to send Rwandan troops to Mozambique without consulting parliament. Opposition lawmaker Fernando Bismarque referred to the deployment as an abuse. Bismarque is a spokesman for the Democratic Movement of Mozambique, the country’s second-largest opposition party.

The Centre for Democracy and Development, a local rights organisation supporting the SADC military intervention, also criticised Rwanda’s deployment. It said Nyusi didn’t have the legal competence to decide to send foreign forces without parliament’s endorsement and accused the government of “repeating the hidden debt scandal.”

The ruling Mozambique Liberation Front (Frelimo), which has always been opposed to external military intervention in Cabo Delgado, hasn’t yet reacted publicly to the deployment. It has also not expressed support for Nyusi as was expected, suggesting that the president made a unilateral decision.

With the resurgence of attacks in Cabo Delgado, there is political consensus at the national level on the need to address violent extremism. Given the state defence forces’ lack of capacity to contain the spread of attacks, the political opposition and rights organisations persuaded the government to request military assistance from SADC countries. Mozambique is a founding member of SADC.

Although reluctant, Frelimo never openly rejected military aid from SADC countries. However, the turn to Rwanda appears to be the first event that could greatly divide Mozambicans over addressing extremism in Cabo Delgado. The presence of private military companies had already generated criticism in parliament, but their action was on a smaller scale.

A thousand Rwandan troops are too many to ignore in Cabo Delgado. Potential incidents against civilians — which are common in conflict situations — can lead to divisions and possibly political violence in Mozambique. The lack of political support and national consensus on the Rwandan deployment, together with the secrecy in which it has been dealt, could substantially undermine the intervention.

A contested presence of troops from Rwanda could fuel the latent conflict between the government and Renamo. Attempts are ongoing to build national reconciliation after a peace agreement was signed in 2019 to end successive years of armed conflict.

Even after the deal was signed though, Renamo accused the government of maintaining death squads that persecute and murder opposition members. In April 2020, Renamo alleged the government’s defence and security forces had murdered its members in Palma and Ibo districts, threatening to turn the fight against terrorism into a local political conflict.

Military sources have revealed that Rwandan troops will be conducting operations in almost all Cabo Delgado’s districts hit by violent extremism. This means contact with civilians will be inevitable.

The government of Cabo Delgado has appealed to the local population to collaborate with foreign troops. But the lack of support from opposition parties — which generally have significant support in the affected districts — could damage relations between Rwandan soldiers and locals. And this could lead to the failure of the mission. DM