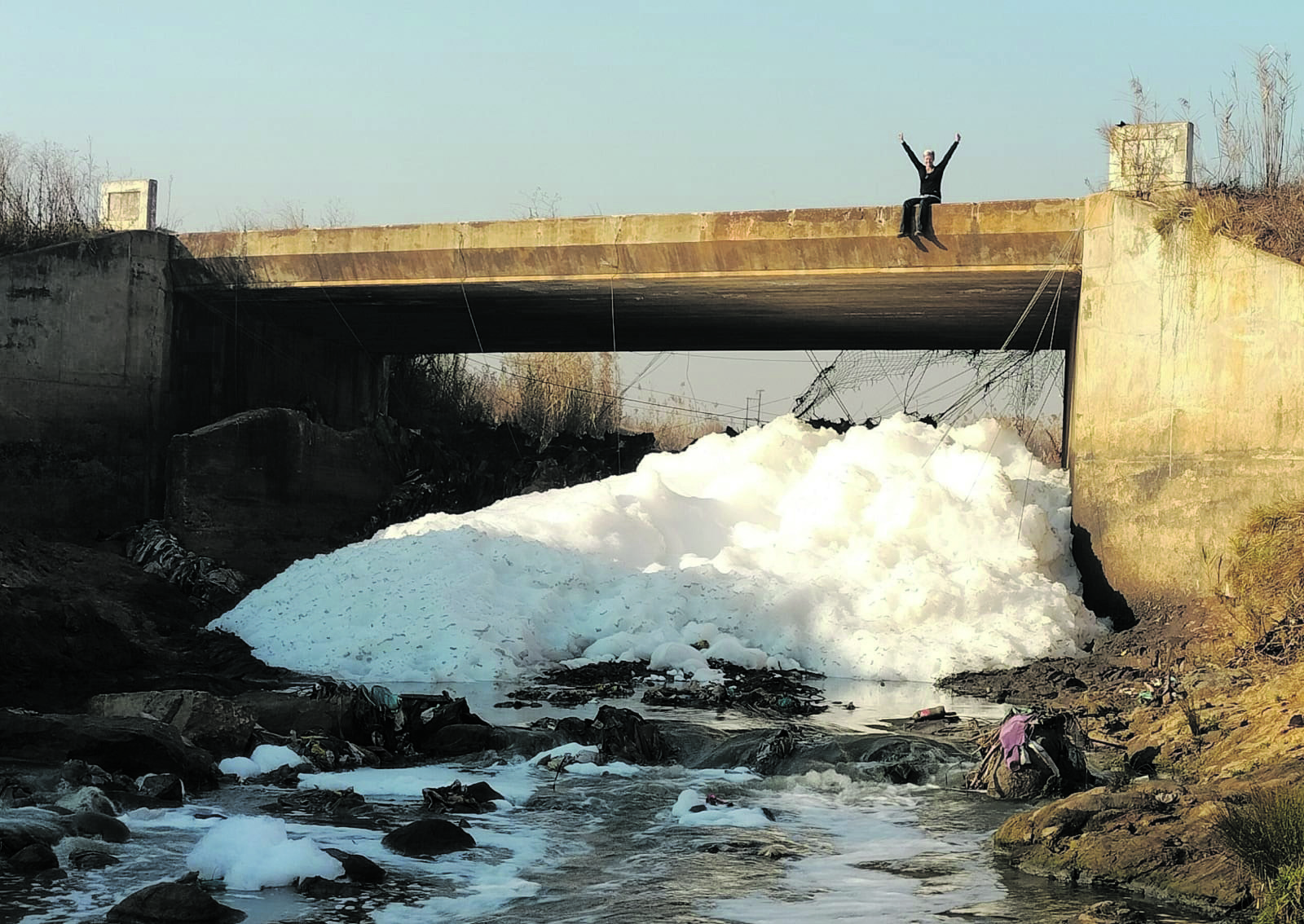 Tarryn Johnston of NPO Hennops Revival, on a bridge over the Kaalspruit near Tembisa, observes the result of the effluent and chemical pollution that flows into the Hennops River. (Photo: Angus Begg)

A residential estate at the eastern edge of Tshwane Municipality, across the road from the beautiful and historical suburb of Irene, is currently highlighting the latest stage in the destruction of a significant South African river.

The estate is one of those ubiquitous South African residential bubbles, growing in popularity exponentially as security and service delivery fail. It is a well-treed and landscaped property, characterised by large, multimillion-rand properties built around a golf course about 30 years ago, and the province’s signature Hennops River running through the middle.

A late-afternoon stroll across the golf course, when the cursing golfers have left, provides magnificent sunset views, with lapwings and Egyptian geese bedding down for the night. Riding on the back of the cooler evening air, through this almost pastoral scene, is the foul stench of sewage.

Tarryn Johnston of NPO Hennops Revival, who lives close to the river, says the smell always worsens in winter owing to lack of rainfall to clean the water. “When the sun warms up the water, sludge from the bottom bubbles up from underneath and releases gasses into the air.” Johnston is just one of an army of volunteers and NGOs working to rescue our rivers and bodies of water.

Water rights activist Willem Snyman, who runs another water activist NPO, says the thick odour is the “direct discharge into streams from household toilets”. I think of Paul, a rough sleeper who makes his bed in the reeds alongside Johannesburg’s Braamfontein Spruit, and who recently explained how he cleans himself after “a number two”, and consider Snyman’s description as the sanitised version.

Seen from the Gautrain above, as it pulls into Centurion Station, it is clear that the growing informal squatter camp on the banks of the Hennops River, with the quaint name of “Mushroom”, provides plenty of Paul-type opportunities. But the abuse of the river is about more than human faeces.

Anthony Duigan of Action for Responsible Management of Our Rivers (Armour) says that, although the Vaal has a major problem with sewage, the Hennops is far worse off. It is “drowning in chemical and industrial effluent”, says Duigan, who lives closer towards Hartbeespoort Dam, into which the Hennops flows.

Johnston, who regularly has the river’s water quality tested, attributes the “astronomical” and multiple pollution levels to the fact that there are so many tributaries that flow into the Hennops, most coursing through industrial areas.

Duigan says it is probably South Africa’s most polluted river. His wife Helen, who started Armour, speaks of the river sometimes having run “red and blue”.

The river has a few sources, in both Johannesburg and Ekurhuleni metros. A significant one is Kaalfontein in Tembisa, a wetland “fountain” where the water emerges from the ground, flows as the Kaalspruit through the Johannesburg Metro and then via Irene into the Tshwane Metro as the Hennops River.

Like Duigan, Johnston and Snyman, Samuel Mashimbi, a community activist who runs an NPO called Envirocare, is devoted to the river’s resuscitation.

“Nature is very important for any living thing, hence human beings must take nature as an important part of life. I am part of the community, and taking care of our environment should be a responsibility of any individual.”

It is testament to humankind’s ignorance of nature’s functioning that, much like with the first construction of settlements on the Cape Flat wetlands, the Ekurhuleni municipality and relevant authorities have seemingly allowed developers to build and dump rubble on the Kaalfontein wetland, nature’s water filter.

Kaalfontein falls into councillor Derek Thomson’s ward. He confirms that it is illegal to dump, but that “this current ANC-led metro doesn’t care”.

He speaks of 1,000 illegal shacks on the banks of the Kaalspruit, in the Tswelopele informal area of Ward 1 Ext 8. He says that is apart from the 1,400 legal shacks.

He says when he was elected councillor there were 850 shacks, and expresses pride in having secured each one a toilet. “At the time there were 20 families sharing a toilet.”

He says neither the Ekurhuleni Metro, the City of Johannesburg – which intersects with the metro – nor the Department of Human Settlements has acted against the illegal occupation and structures on the riverbank.

Mashimbi says the community that resides next to the Kaalspruit streams that flow from the Kaalfontein wetland spring is aware that the contaminated water can’t be used for cooking. He says the same community, however, does not connect its actions to the contamination of water.

“It’s the worst-contaminated stream,” says Mashimbi. “As days goes by it is in a state of no return, highly contaminated by all sorts of waste.”

Snyman says the natural spring is so large that it forms its own streams in the area. The largest is also called Kaalfontein.

“It is here where much of the wetland is being destroyed for low-cost housing, filled with building rubble to lay it dry, all household waste going into the stream.”

Johnston confirms that developers are “a huge problem”, that by building on wetlands – more homes with more kitchens and bathrooms – they are adding more sewage to an already overcompromised non-sewage and sewerage system.

The Olifantsfontein Wastewater Treatment Works (WWTW), which pumps water into this section of the Hennops, is one of 19 plants in Ekurhuleni, 11 of which are overcapacitated. Thomson says the plant got R200-million to increase the capacity in 2020, but a pipe pumping effluent into the Kaalspruit suggests it is in part culpable for the pollution and stench.

It’s all about the money

Thomson speaks of a process he came across called bioremediation, which he says would have done the same job for R3-million. He listed the positives: no need to enlarge the plant, no need to use chemicals, “no hundreds of millions of rands’ worth of fancy equipment, but the capacity and water quality going out is increased”.

When asked why such a seemingly perfect solution has not been adopted, he says there is no political will. There is seemingly significant interest in fixing a problem for R200-million rather than R3-million.

Thomson says a directive was issued five years ago by the national Department of Water and Sanitation against the Olifantsfontein WWTW and the Ekurhuleni Metro. He says a budget had been allocated for the rehabilitation of the Kaalspruit, but that it vanished.

Which doesn’t help the Hennops.

When the dirty water discharged into the river is aggravated by turbulence, the result is the sometimes spectacular foam castles, reminiscent of an exploded washing machine in a Will Ferrell comedy. These are an indication of the high phosphate levels in the water, says Johnston.

“Sewage, [water from] washing machines, dishwashers and bubble baths, unregulated phosphate levels in our detergents, they all flow into the sewers, and because the wastewater treatment works are only partially functioning, the wastewater can’t be properly treated.”

Whose fault is it?

Most Hennops activists seem to agree that Ekurhuleni probably bears most responsibility for the state of the river.

“It’s a complete violation of constitutional rights, as well as a national disaster,” says Johnston, whose aim is to ensure that the Hennops does not get forgotten about.

Mashimbi, considering his community of informal settlement dwellers, says he aims to develop and implement an intervention strategy based on active participation, engagement, consultation and involvement. A challenge, given recent events, and a metro by many accounts refusing to take responsibility for its having facilitated the abuse of the early stages of the Hennops River.

Seeking precedent, I think back to producing Carte Blanche inserts on Cape Town’s polluted Disa River, flowing past Imizamo Yethu township into the signature attraction that is Hout Bay, carrying with it astronomical E. coli bacteria counts. Milnerton Lagoon, also in the Mother City, has frequently been exposed to untreated sewage, so much so that, as reported in GroundUp in April this year, the Green Scorpions ordered the city to clean it up.

Snyman describes the Hennops River as “a perennial fountain … a major source of Tshwane drinking water and Gauteng’s longest river”.

It sounds like, after countless articles written and contact made with authorities, Johnston, Mashimbi, Snyman and residents of the Hennops just may require the involvement of the Green Scorpions to get that river clean. DM168