Health and unrest: KZN healthcare services left battered after a week of riots and looting 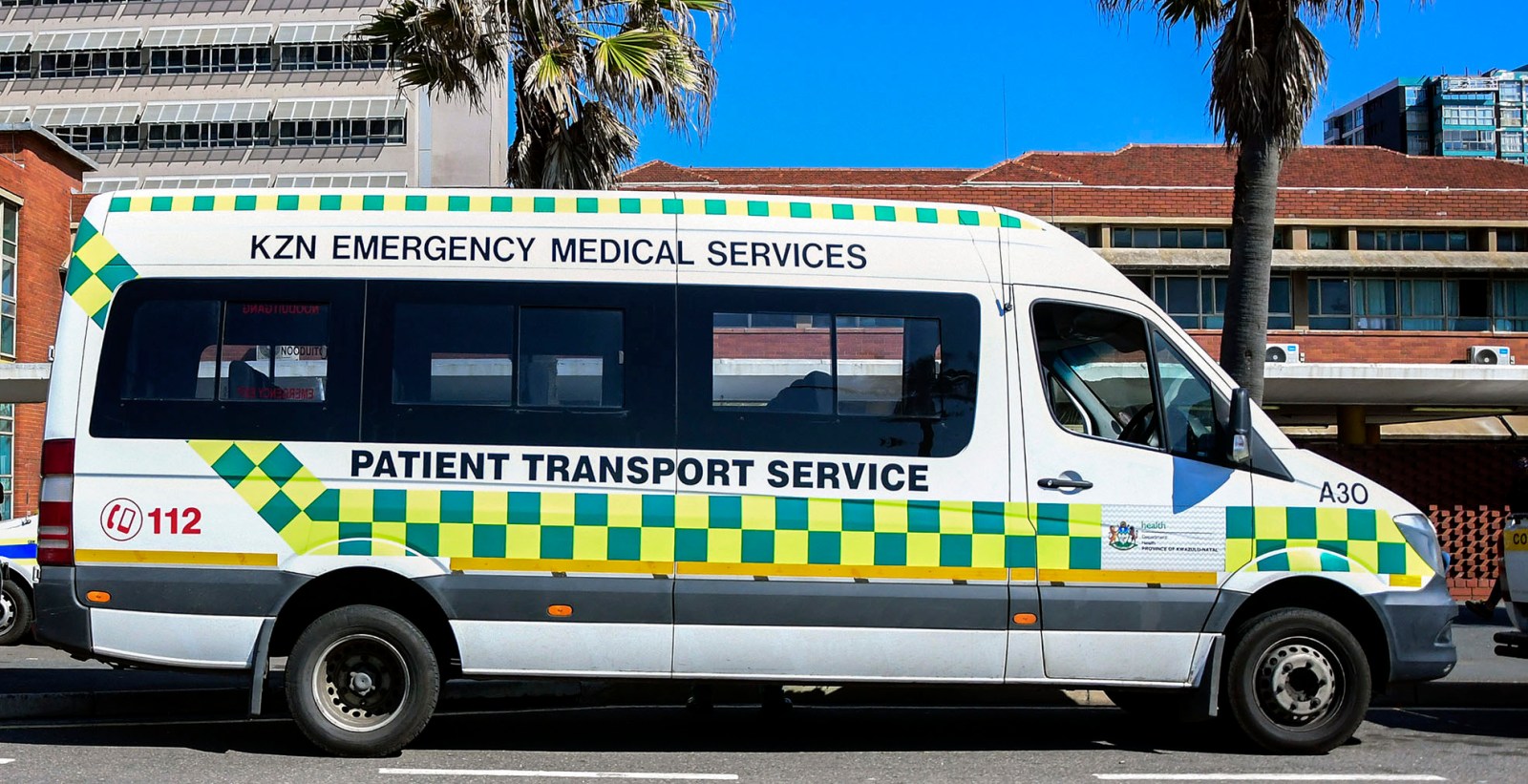 Protesters have barred ambulances from gaining access to sick and injured people, according to a statement by the KwaZulu-Natal provincial government. (Photo by Gallo Images / Darren Stewart)

By Friday, looting, rioting and violence in parts of KwaZulu-Natal left shops and pharmacies empty and vandalised, warehouses burnt to the ground and many lives lost.

On Monday, 12 July, when Dr Mabola* a GP who operates a private surgery in Durban Central, made his way to work, he found his office looted and vandalised. “They even took the cushions in my waiting room,” he said. Mabola is a foreign national and asked not to be named for fear of further attacks.

By Friday, looting, rioting, and violence in parts of KwaZulu-Natal had left shops and pharmacies empty and vandalised, warehouses burnt to the ground, and many lives lost.

The looting, violence, and destruction of property this week have fuelled fears over food and medicine security. All this unfolded while the country is in the grip of a third wave of Covid-19 and at a time when health systems and physical distancing are paramount in the fight against the pandemic.

“I don’t understand why people would do this,” Mabola said. “I am here to save lives, yet people do this to me. They stole everything and destroyed everything. I have patients who require renewed prescriptions regularly. Patients with chronic diseases, Covid-19, TB, HIV, diabetes, and many others. Their records have been destroyed and medication has been stolen,” Mabola said.

“This goes beyond hunger,” he said. “Destroying records, stealing furniture, stealing portraits and wall hangings. It shows how much people do not want to work. They came here with a car to steal.”

He is among the many general practitioners with private practices who also work in the public sector hospitals. “I am not going back to King Edward hospital. I cannot go there and save the lives of the same people who did this to my office. This kind of looting has nothing to do with poverty and hunger,” he said.

The dental practice next to his was also looted and destroyed.

Burnt to the ground

Pharmacies were also not spared and at least one independently owned (community) pharmacy in the province was burnt to the ground.

Registrar of the South African Pharmacy Council Vincent Tlala said in a statement that by Wednesday, more than 90 pharmacies had been looted and destroyed in Gauteng and KwaZulu-Natal. “Among the looted items were Covid-19 vaccines and scheduled medicines, which when used without proper pharmacist counselling on storage and dosage may result in harm to one’s health.” Pharmacies in KwaZulu-Natal took the biggest hit, Tlala said.

Clicks in the Berea Centre was also looted and vandalised, with the pharmacy cleared out.

Clicks Pharmacies said in a statement they had to close 110 stores in KZN. “52 Clicks stores have been destroyed and 106 Covid vaccination sites have been closed in the unrest, meaning we cannot manage or provide public-sector medical pickup points or administer vaccinations.”

Meanwhile, Alpha Pharmacy in Glenwood, Durban was ransacked and looted completely. The landlord of the building, who lives close to the pharmacy, witnessed the looting, but was powerless against the large group of looters. “There was nothing I could do. These people were angry and there was no police or security to help stop them. We could only watch,” he said.

CEO of the Independent Community Pharmacists Association (ICPA), Jackie Maimin, said 51 independently owned pharmacies in KZN, Gauteng, and Mpumalanga were looted and damaged this week. In KZN a pharmacy was burnt to the ground. A total of 31 pharmacies across the province were vandalised and cleaned out.

“The ICPA is putting together a crisis management programme to assist its members (pharmacies) to deal with the aftermath. We will have more information to share over the weekend,” she said.

The riots placed great strain on an already overwhelmed healthcare system as many people were injured, beaten and involved in accidents caused by the violent chaos.

KwaZulu-Natal Health MEC Nomagugu Simelane-Zulu this week bemoaned the violence and disruptions to healthcare services. In a statement, she said healthcare facilities had been receiving an increased number of trauma patients. “I’m referring here to people with stabbings, gunshot wounds, burns and those run over by motor vehicles,” she said.

A young entrepreneur from KwaMnyandu was one of those injured, caught in the crossfire of looters when he tried to defend his clothing stall. He was shot in his left ankle. “I asked my cousin to take me to Wentworth Hospital where I lied that I had been robbed and shot in the process. I was afraid to tell them where I was as I would get arrested as one of the looters. I was referred to King Edward Hospital for gunshot treatment and X-rays. I spent two nights sleeping in a wheelchair because the hospital was full and no beds were available.”

According to Simelane-Zulu, there were “a number of hospitals, Community Health Centres and clinics across KwaZulu-Natal that have been operating on skeletal staff, with many nurses, doctors, allied health workers and support staff unable to report for work due to the blockades, as well as lack of public transport”.

A nurse at one of the hospitals in Durban expressed great concern over the effect of the unrest on their ability to go to work. “I’m sure it’s a mess there at the hospital,” she tells Spotlight on her way back home. She went to work, but decided to turn back out of fear. “Myself and other colleagues have not been able to go to work for four days now. Roads have been blocked and there’s no transport, plus it is not safe. I am sure the other nurses are tired and overburdened.”

Earlier in the week, on Tuesday morning the Lancers Road Clinic in Durban had to close because nurses could not report for duty. There was only one security staff member when Spotlight visited.

The Prince Cyril Zulu Communicable Disease Centre, one of the biggest dispensaries for chronic health medications to public health patients in Durban, was another casualty in the ongoing unrest this week. It closed its doors by Tuesday. The management decided to protect the facility by closing it in light of the riots. No one from the centre could be reached for comment. DM/MC