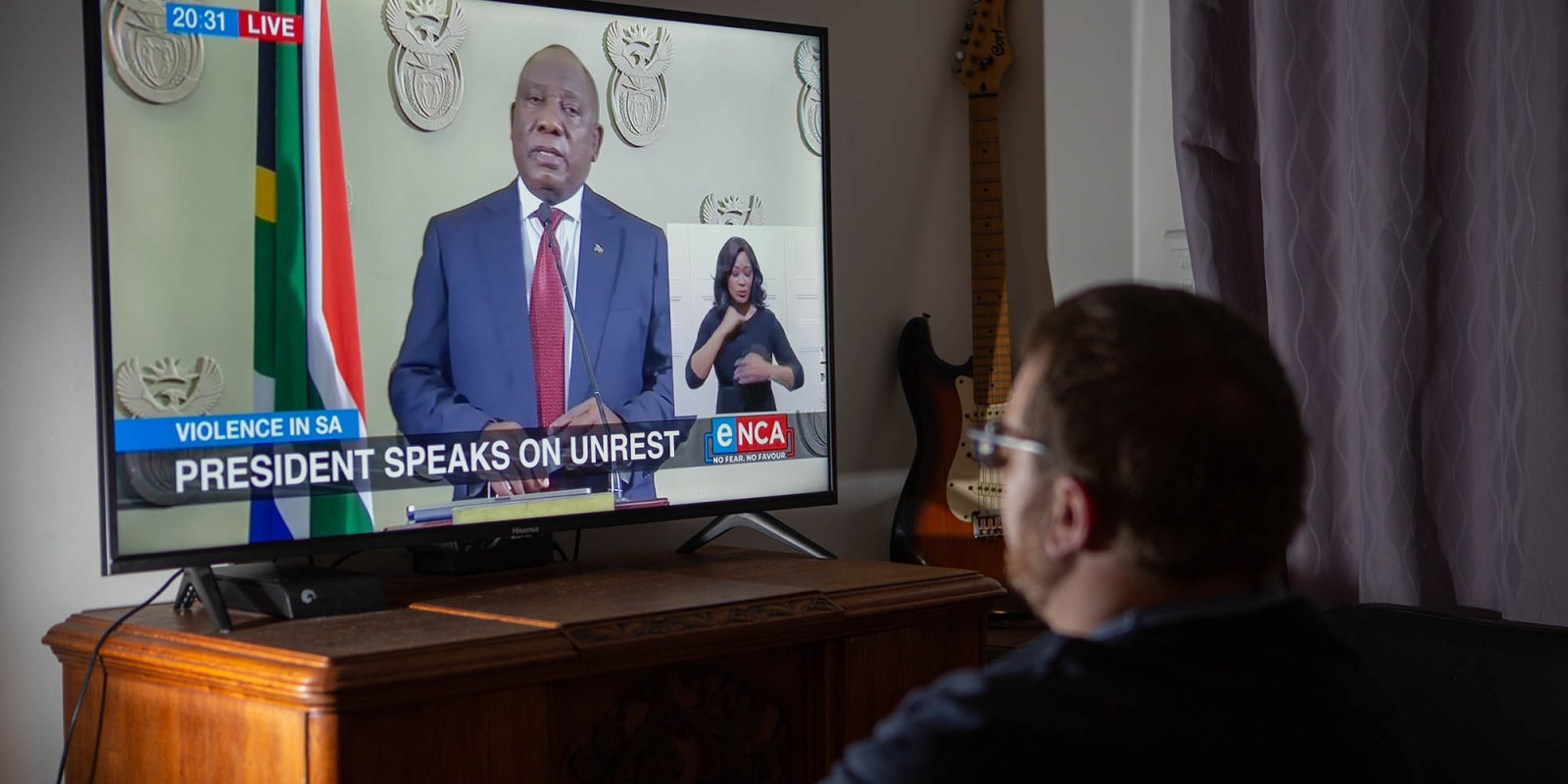 Foreign governments and investors have been rattled by the mayhem in KwaZulu-Natal and Gauteng. Many are wondering if this is just another episode of chronic looting and destruction on a larger scale, or the first tick of the time bomb they have long been expecting in SA. They want to see if President Cyril Ramaphosa can bring the chaos under control.

The looting and destruction clearly damaged SA’s international prestige. African Union Chairperson Moussa Faki Mahamat condemned the violence and called for “the urgent restoration of peace, order and stability … in full respect for the rule of law”.

Other countries usually on the receiving end of such knuckle-rapping, like Zimbabwe, are probably quietly crowing – though also concerned. Zanu-PF’s secretary for external affairs, Simbarashe Mumbengegwi, called for calm in SA, saying any instability in any country in the region affects the others.

There is speculation that the deployment of 25,000 soldiers to quell the violence may force the SA government to cancel its plans to contribute troops to a Southern African Development Community (SADC) standby force to be deployed into Mozambique’s Cabo Delgado province to combat Islamist rebels.

For now, ambassadors do not see the violence and destruction in Gauteng and KZN as a coup, an insurrection or a revolution. None said any of their companies had decided to leave because of it. But they also said future investment had probably been put on hold – though they added it was probably on hold anyway because of the Covid-19 pandemic and factors such as load shedding.

Most ambassadors DM168 spoke to believe the rampage was inspired and possibly instigated by Jacob Zuma supporters after he was jailed on 7 July but was then taken over by opportunistic criminals, and poor and hungry people.

A few have been struck by the irony that it was they and their investors who urged Ramaphosa to act against Zuma to send a signal that the rule of law was being upheld in SA. They sent cables to their capitals welcoming his jailing. One diplomat recalled that recently the CEO of a prominent foreign company had “said the day Zuma goes to prison … would be the day that foreign investors gained confidence in Ramaphosa’s government”.

This diplomat said foreign governments, particularly of countries with large investments in SA, still had confidence in Ramaphosa – but it was now starting to erode. They liked his policies and his determination to clean up corruption. Some also thought his response to the rampage this week had been good – once he reacted. They were pleased he deployed 2,500 troops on 12 July and when he increased that to 25,000 on 14 July.

But most were critical of Ramaphosa’s late action. “It’s not the first time that a political happening that divides the country has provoked some sort of demonstration that ended up in looting,” one said. “You’ve seen the xenophobic attacks and service delivery protests… It’s difficult to understand that they did not anticipate this.”

Some were critical of Ramaphosa for failing to assemble a Cabinet fully committed to his reforms. They were especially critical of State Security Minister Ayanda Dlodlo for failing to see the trouble coming and of Police Minister Bheki Cele for not responding quickly enough to prevent the ransacking of shopping malls and infrastructure.

One ambassador, a “big believer” in Ramaphosa, said: “I think he has the right priorities and the right programme. He knows what he has to do. He’s just too consensual and too slow, I think… It’s already more than a year that there’s these rumours about a reshuffle of the Cabinet. I think in his place I would have reshuffled it already. I mean, there’s a vice president who’s not really operational… An acting minister of health in the middle of a pandemic. A minister of state security that is not doing her job. A minister of police that is running behind the facts… So I maintain my confidence in him in terms of his policy priorities. But in terms of implementing it, it’s quite disappointing.”

This ambassador said he had recently reported to his capital about the positive developments at the NPA and the reassuring judgment of the Pietermaritzburg High Court rejecting Zuma’s application for a stay of his arrest. Another ambassador welcomed Ramaphosa’s decision to lift the ceiling on private energy production from 10 MW to 100 MW. And then the mayhem erupted.

“There’s no other way to interpret it than as weak leadership, weak institutions,” one of the ambassadors said. “If it passes, there is no need to interpret this as game-changing.”

Another diplomat added that this sort of rioting happened elsewhere in Africa – but South Africa was in the world’s spotlight.

Another said: “It is pretty serious… South Africa erupts in violence and protests pretty regularly. So anyone who knows South Africa is reasonably used to that. But this feels different in terms of scale and severity.

“The looting and arson are worrying and also this image of lawlessness over the last few days which is worrying people inside the country but also the stories are being picked up by international media. Those who are very fond of South Africa are very concerned.”

Another said: “Our analysis is that it’s probably a mix between the local mafias where some of the Zuma people are probably involved together with a political will to take advantage to destabilise the country and if the country is destabilised then you have impunity.”

So it’s not the main cause, but someone has mobilised the masses.

“Whether it’s criminals who have nothing to do with Zuma and probably some of the Zuma people are involved as well … we don’t see any revolution, we don’t see any insurrection as such. There is no need. People can go on to the street and demonstrate.

“There is a free press. We don’t see this as being like the Arab Spring. If you look at those countries you had someone to topple. That’s why you had a revolution. Who do you want to topple here? It’s a democracy.”

Although the unrest was triggered by political motives, “it’s more an expression of the enormous levels of frustration that people feel because of poverty, inequality and unemployment”, one diplomat said.

“For your investor who wants to do business with South Africa this adds another layer of uncertainty and instability. What investors want is predictability, stability.

“On the other hand, it could be an incentive for the government to try now to push through economic reforms,” he added. This should include providing clarity on land reform, which was worrying investors,

He also noted that the World Bank had recently said that, among emerging economies, SA had the lowest ranking of self-employment and entrepreneurship. To address this, SA should make it easier to do business.

The diplomats we spoke to said their investors had mostly been in the country a long time and understood the environment. But they were looking to see how quickly the government could get the violence and destruction under control. “And they’ll also be looking at whether there are repeats of this in the coming weeks, whether it’s a one-off burst or whether it’s a pattern that will continue.” DM168