The Making of Mandela Day 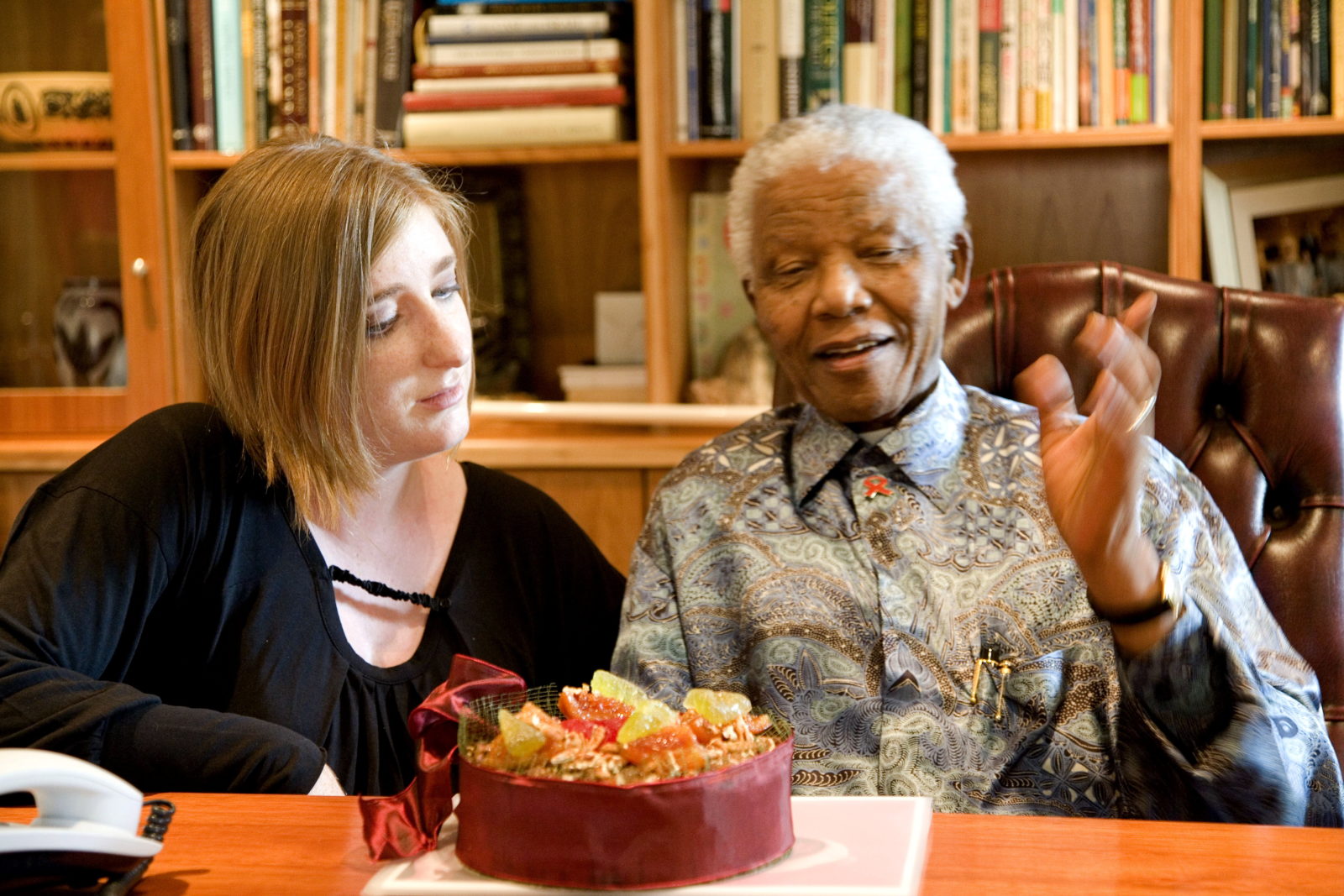 Nelson Mandela saw his birthday as a public, political tool, not a private party. TGIFood writer Anna Trapido, author of Hunger for Freedom; the story of food in the life of Nelson Mandela, retraces some of the walk she took with Madiba and those in his circle.

The author supports the Nelson Mandela Foundation’s #Each1Feed1 initiative which seeks to bring relief to food insecure South Africans during and after the Covid-19 crisis.

Nelson Mandela was not particularly interested in his birthday as a personal milestone. So, how did we end up with an annual, international event marking the date of his birth? And what should we do to create the sort of Mandela Day that the man himself would have wanted?

The Thembu culture into which Madiba was born does not traditionally accord much significance to birthdays but rather recognises longer-term life stage transitions. In Long Walk to Freedom he highlights the imbeleko rituals that introduced baby Rolihlahla to the spiritual and social milieu of Mvezo in 1918 and also describes the festivities associated with his ulwaluko initiation into manhood in 1935, but makes no mention of birthday celebrations occurring as part of his Eastern Cape youth.

Later, as an adult living and working in Johannesburg, there is no evidence that Madiba paid much attention to his birthday. For my gastro-political biography Hunger for Freedom; the story of food in the life of Nelson Mandela, I interviewed many of his friends, comrades and relatives, all of whom supported his cousin Sitsheketshe, Morrison Mandela’s assessment that “the old man used to be a socialite and there were lots of parties”, but no one remembered him throwing himself a birthday bash.

He occasionally attended other people’s birthday parties as a guest – Joe Matthews remembered his having several helpings of a deliciously lemon-laden roast lamb cooked by George Bizos in 1952 at an event to ring in Joe Slovo’s 26th year – but the only birthday party that Madiba ever actually helped to organise was Amina Cachalia’s extremely unsuccessful 21st in 1951. In 2007 the birthday girl told me that it “took place at Aggie Patel’s flat in Lillian Road (opposite where the Plaza is now) when Yusuf, my then boyfriend, later husband, got it into his head to cook 21 pigeons – he thought it would be a treat but I took one look at those poor little things, so tiny and pathetic and I said ‘no, what are they?’

“You see, I was a really good little Muslim girl and poor little things, I didn’t know if we should be eating them. And anyway, they looked awful – the meat was so dark. Anyway, Yusuf roped Nelson into helping with the kitchen duties and they got all excited about making this my birthday treat. Nelson couldn’t cook to save his life, Yusuf was a good cook but neither had any experience with pigeons. So, Yusuf did the cooking and Nelson cleaned the rice and so forth. He was trying to be helpful. In the end they sort of curried the birds. I was told not to come into the kitchen because this was their day in the kitchen. They spent the whole afternoon cooking those pigeons. And by the time they came to the table, I was even less keen to eat those pigeons so I just had the rice and the sauce but I couldn’t bring myself to eat the birds.”

Throughout his life Madiba had a habit of reconfiguring his birthday as a joint celebration. Fellow prisoner on Robben Island Fikile Bam recollected: “I share a birthday with Nelson Mandela, something we discovered quite by accident in prison in 1964… Subsequent to that, every year on 18 July, Madiba would give me a birthday present… a packet of biscuits or chocolates. In jail we were only allowed to buy these things over Christmas and he would keep it until 18 July. By that time, of course, I would have squandered all mine, so I never had anything to reciprocate with!”

Despite Madiba’s best efforts to divert attention away from his birthday, July 18 has become an international event complete with United Nations declarations and pontificating pop stars. The evolution of this unlikely outcome can be traced back to July 18, 1978 when Mandela turned 60 in prison and the United Nations Special Committee on Apartheid called for the occasion to be recognised worldwide. The British Anti-Apartheid Movement organised for 10,000 birthday cards to be sent to Robben Island. Former prison warder Christo Brand told me that all such post was dumped into the prison incinerators without reaching Madiba but that the task took days and created clouds of black smoke all across the island.

At the time, the jailed freedom fighter was unaware of the burnt birthday cards but he knew that the ANC and its international allies had adopted a strategy whereby his person acted as a proxy for the broader political struggle against apartheid. As the years of imprisonment rolled on the campaign evolved into the 1988 Wembley Stadium “Nelson Mandela: Freedom at 70” concert.

Madiba’s birthday sharing style continued into the post-apartheid era. In 1994 he used the occasion of his first birthday as President of South Africa as an opportunity to host over 1,000 liberation struggle veterans at the Presidential Guest House in Pretoria. Freedom fighters representing the ANC, PAC, Communist Party, Congress of Democrats, Black Consciousness Movement, Black Sash and the Liberal Party sat down to a slap-up lunch of pot roasted beef, cinnamon pumpkin, pap and gravy which allowed Madiba “to celebrate this birthday with my peers. It is wonderful to meet with so many old friends, comrades and combatants who stood firm in their fight for peace and justice. We should not forget those who never returned to enjoy with us the fruits of victory”. In 1998 he combined his 80th birthday party with his wedding to Graça Machel.

Mandela Day was officially adopted in 2009 by resolution of the United Nations General Assembly. The implementation coincided with Madiba’s 90th birthday, his official retirement from public life and his observation that: “It is in your hands now.” For the first few years individuals were encouraged to perform 67 minutes of service in recognition of Madiba’s 67 years of activism. Enthusiasm was everywhere apparent but focus was often lacking. As Sello Hatang, chief executive of the Nelson Mandela Foundation (NMF), observed: “It just isn’t enough for privileged people to take action against poverty for an hour and seven minutes on July 18 each year. That will not change systems and structures.”

In order to ensure a more empowering outcome, NMF Mandela Day projects are focused on strategic activism against injustice and advocacy for appropriate public policy shifts. While there is hunger there can be no social justice. The Covid-19 crisis has exacerbated pre-existing inequality – which is why the NMF also collaborate with food security organisations across South Africa under the auspices of the #Each1Feed1 initiative. Both initiatives run continuously with July 18 acting as a tool with which to focus fundraising and awareness initiatives. As such the NMF projects are consistent with Madiba’s understanding of his birthday – as an instrument of upliftment.

Madiba’s birthday pragmatism should not be seen as a sign of hard-heartedness. He considered July 18 to be politically useful public property but he had his own special day to which he attached private sentimental significance. March 10, 1957 was the occasion upon which he first took Miss Nomzamo, Winnie Madikizela, out to dinner. In a 1970 letter to his then wife from Robben Island prison he wrote: “Perhaps, no I am sure, the good old days will come when life will sweeten our tongues and nurse our wounds. Above all, remember March 10. That is the source of our strength. I never forget it.”

The past decade, the last year and especially this week have left us all desperately needing sources of strength. As a public source of strength Mandela’s birthday works pretty well. It reminds us all of the principles for which he (and his comrades) fought. It allows us to assess and acknowledge victories – let us not forget that there have been many – and defeats on the long walk to freedom. South Africa is very far from the equitable, unified country Madiba was working for and July 18 is an annual opportunity to air constructive criticism. Creating social cohesion in the context of Covid-19 social distancing is difficult but surely not impossible? There are all sorts of organisations, all over South Africa, that can and do facilitate public participation in the formation of a more just and equitable country. Motivation is the missing link. Public events like Mandela Day can only take us so far. In order to summon inspiration and energy amidst chaos and confusion we will have to dig deep and locate our own individual March 10th moments – they will be the source of our strength… DM/TGIFood