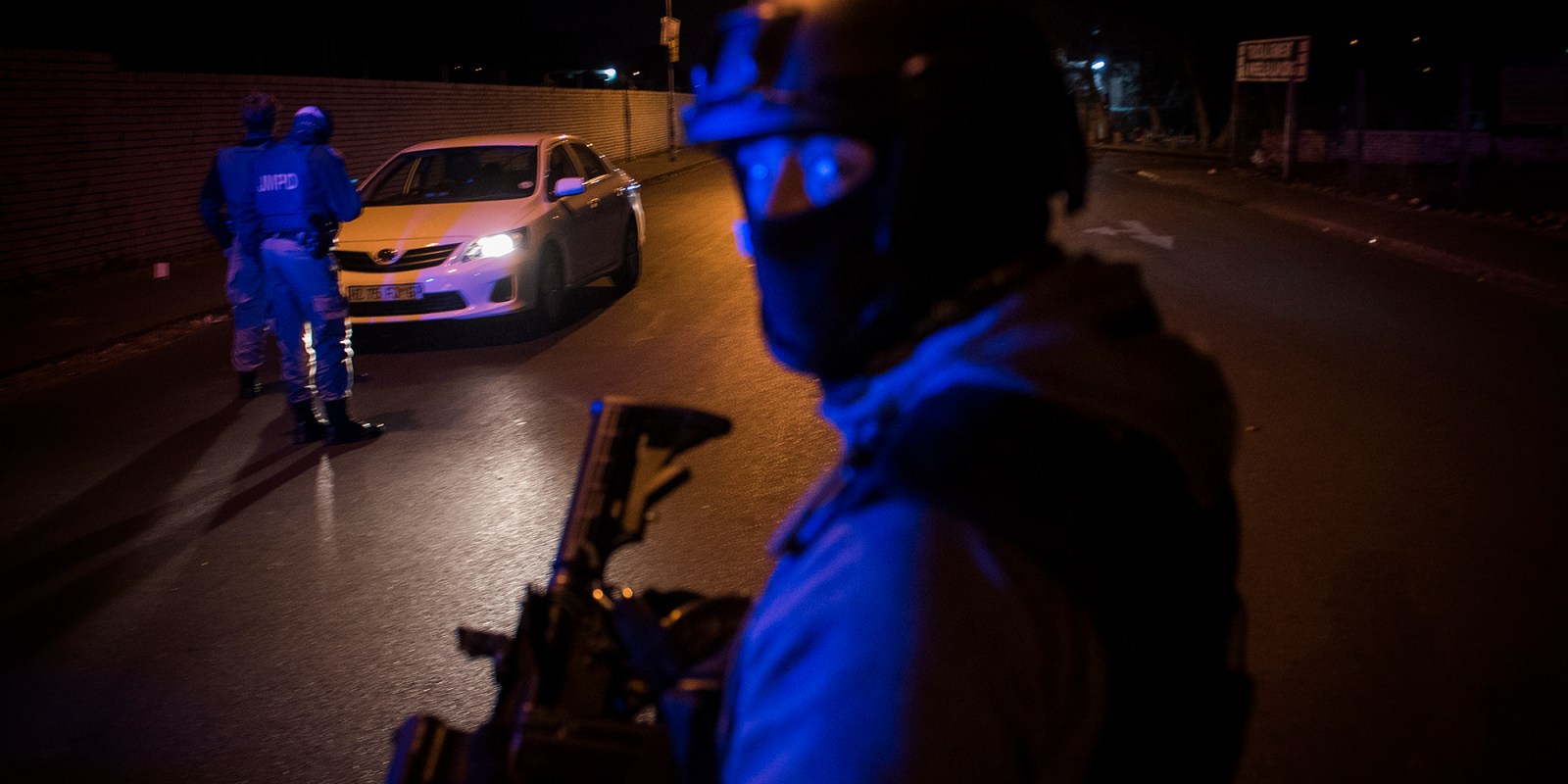 A member of a private security company returns to his colleagues after pushing back protesters in Jeppestown, Johannesburg, on 12 July 2021. (Photo: Shiraaz Mohamed)

‘All registered businesses are (or ought to be) aware of the law regarding the possession and use of firearms,’ says Psira, the governing body for the private security industry. This comes as videos on social media show supposed private security personnel shooting people during the looting spree that rocked South Africa.

The parliamentary oversight committee on police will meet on Friday to discuss the looting and violence in KwaZulu-Natal and Gauteng. The committee chairperson, Tina Joematt-Pettersson, said the meeting would deal primarily with the police response to the ongoing violence. However, it is expected that “the role played by the private security industry as well as the South African National Defence Force will also be discussed”.

Joematt-Pettersson was responding to questions posed by Daily Maverick over the role of private security firms during the unrest, which started last week following the incarceration of former president Jacob Zuma.

Videos, voice clips and images on social media show private security firms shooting at people and blockading entrances to suburbs. In one such widely circulated video, people in a van are seen shouting at people to get inside their homes, and then shooting. A security company’s name is visible, but it is not known if the people are registered security personnel, if they were on duty at the time or what their mandates were.

When Daily Maverick looked up the company’s details on the security industry regulatory body, the Private Security Industry Regulatory Authority (Psira) database, our search ran dry – the company was not registered. The company does not have a social media presence and its phone number just switched off without ringing. A cellphone number provided for the company was answered, but the person who responded had never heard of the company.

In response to questions around such videos, Joemat-Pettersson said: “Because of the nature of events over the past few days there has been high  circulation of incidents on social media platforms which need to be verified  before we are able to comment.”

In addition, she said, “The general adherence to the rule of  law and code of conduct that governs the private security industry is expected at all times.”

Daily Maverick approached Psira for comment on the role of private security, especially with images circulating of companies aligned to Psira “defending” clients and communities against those deemed looters.

When asked by Daily Maverick if Psira had met with security companies in Gauteng and KwaZulu Natal about the ongoing violence, Psira said: “Certainly not in the last few days. However, compliance fora are held from time to time to discuss issues of compliance, including the use of firearms by private security providers. All registered businesses are (or ought to be) aware of the law regarding the possession and use of firearms.

“Our recommendation is that the law must be complied with. As a creature of statute, Psira cannot go beyond that. South Africa is a democracy that has the rule of law… compliance with the law is what we preach.”

“The Ministry is pleased that engagements with the private security industry have been escalated to improve coordination while managing the unrest,” read a statement issued by the police on Thursday morning. DM