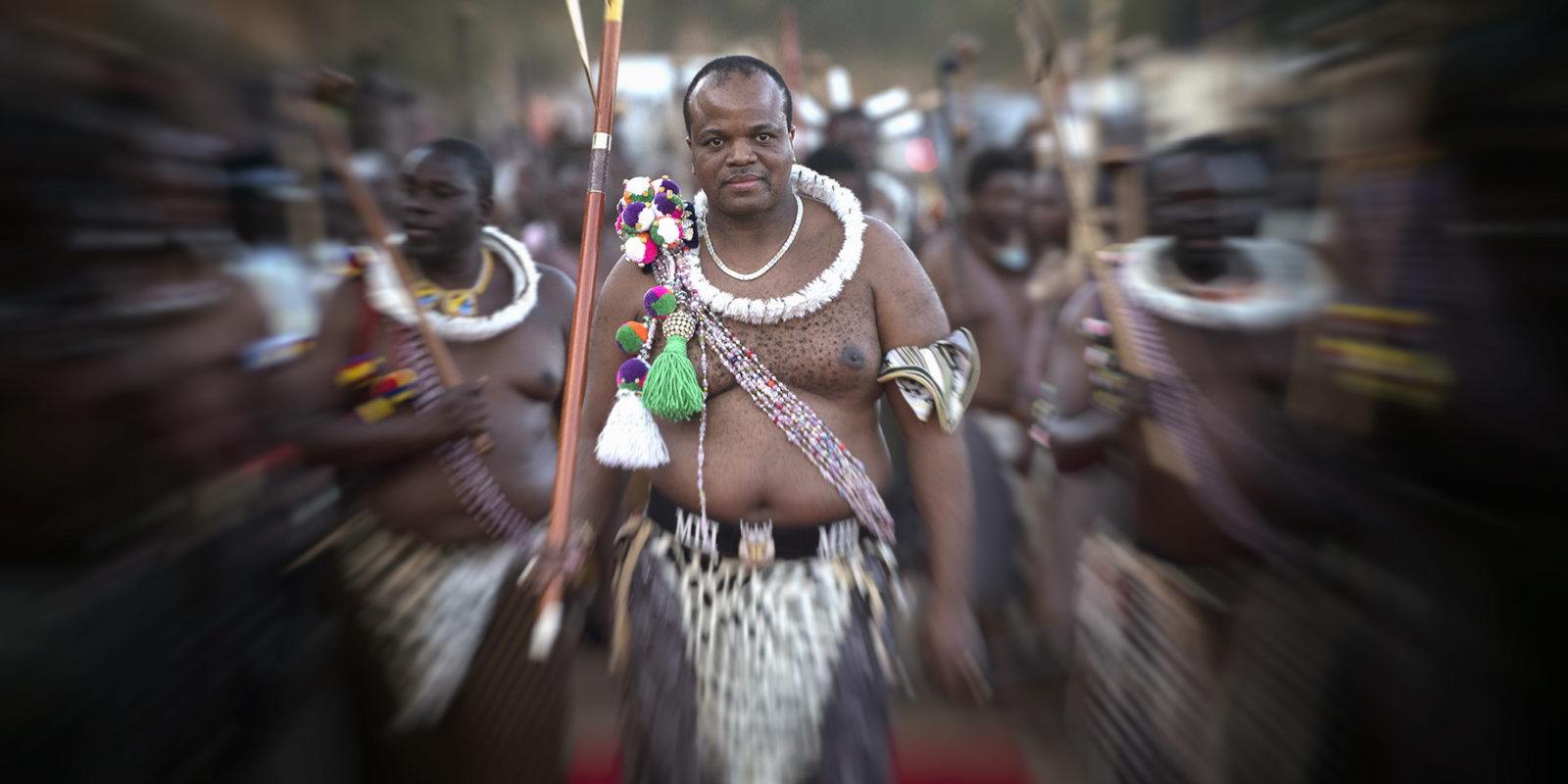 King Mswati ignored calls for democratic reform saying demonstrators who had destroyed property in the riots last month were like people smoking marijuana who one could not speak sense to. Opposition groups said many Swazis were furious with the king’s stance.

Swazi King Mswati dismissed the violent protests that have rocked his country and ignored demands for democratic change when he addressed the nation for the first time since rumours spread that he had fled the country last month.

The king made one small concession to criticism, though it fell far short of opposition demands for democratic reforms. He rebuked his government for banning Swazis from petitioning their members of parliament with their grievances last month and replaced acting prime minister Themba Masuku with a permanent prime minister, former CEO of the government pension fund Cleopas Dlamini.

Earlier on Friday security forces had broken up a protest march in the commercial capital Manzini by opposition forces demanding democratic reform and a boycott of Mswati’s address to the people, at a rare traditional “sibaya” gathering in his royal residence Ludzidzini.

Sikelela Dlamini, Secretary-General of the Swaziland National Association of Teachers (SNAT), told Reuters that security forces had dispersed the protestors with tear gas and a water cannon.

Another opposition leader told Daily Maverick soldiers had fired live rounds to cause panic and had herded the protesters towards waiting army deployments which beat and arrested them. They said they had been taken out of the cities to detention centres. It was not clear if any protesters had been injured.

And Wandile Dludlu, secretary-general of the banned opposition political party Pudemo said the party’s president Mlungisi Makhanya one of the organisers of the protest, had been arrested by police at Sidvokodvoko, about 20km from the commercial capital Manzini.

Mswati’s public appearance at the sibaya, normally an annual event, was his first since the Eswatini’s most serious bout of political protests,  rioting, looting and destruction erupted in several towns last month.

Though the government had billed the sibaya as “the highest policy and advisory council of the nation,” it turned out to be a one-way conversation. Mswati addressed the crowd for an hour and then left, after apologising that he could not stay longer for an exchange with them because of Covid-19 restrictions.

In his address Mswati largely ignored the calls for democratic reform and said the demonstrators who had destroyed property in the riots last month were like people smoking marijuana to who one could not speak sense to.

He announced the launch of a reconstruction fund to help those who had lost property during the rioting. The government would make the first donation of R500 million into this fund and he invited other donors.

He made light of the reported killing of protestors by security forces, asking how his critics could say in the same breath that he had fled the country but that he had also sent his troops to kill his people.

Mswati merely offered condolences to the families of those who had lost their lives in the protests.

In the one concession to opponents, however, the king also criticised his government for last month’s ban by acting prime minister Themba Masuku and the police on the physical delivery of petitions to their members of parliament in their constituencies or “tinkhundla”.

Mduduzi Simelane, MP for the rural constituency of Siphofaneni ignored this ban and allowed his constituents to continue delivering petitions to his tinkhundla, to express their views on his earlier call for the prime minister to be elected rather than appointed by the king.

Attempts by security forces to prevent the delivery of the petitions sparked protests which spun out of control and led to destructive rioting across the country and the harsh government backlash.

Mswati rebuked the government for its handling of that dispute, saying that if there were MPs who wanted change, they were doing it on the right platform, Parliament and that the tinkhundla were places where the people should have their say. So it was wrong of the government to shut down those platforms.

The king then announced the appointment of Cleopas Dlamini, the CEO of the government pension fund until 2018, as the new prime minister. One local observer described Dlamini as “a very arrogant man in character but he has no political baggage.”

Mswati also responded to the intervention by the Southern African Development Community (SADC) in the crisis. Reacting to the violent protests and deaths, the region intergovernmental body for the first time put Eswatini on its agenda last month, and then sent a delegation of foreign ministers of South Africa, Botswana and Zimbabwe to the country on 4 July.

The ministers met only a government delegation and promised to return later to meet the opposition. However, lobbying by the Swazi government seemed to have diluted SADC’s intervention and this week it sent back only a “technical” mission of officials to assess the situation.

Mswati insisted that the SADC was only in the country on a fact-finding mission and not to change anything. Only SADC itself would recommend what was to be done, he said. This tallied with remarks by South Africa’s international relations and cooperation minister Naledi Pandor during a visit to Namibia this week that the technical mission to Eswatini would report directly to the full SADC summit next month.

Thulani Maseko, a human rights lawyer who chairs the Multi-Stakeholder Coordinating Team representing the largest range of opposition political parties and civil society groups, told Daily Maverick on Friday that it was still not clear whether the SADC technical mission would meet this opposition coalition.

In his sibaya address, Mswati turned this week’s havoc in South Africa to his political advantage. He said he was very shocked that rioting had now broken out in SA too.

Mswati said Southern African governments had consulted among themselves and other states in the region were worried that the rioting – which he likened to the Coronavirus – after moving from Eswatini to South Africa, could reach them next. They were on high alert to prevent that, he said.

Bheki Makhubu, editor of The Nation newspaper which is often critical of the king and the government, said Mswati’s sibaya address had demonstrated that “he’s still in charge. He didn’t pull the rug from under those seeking change but he’s ignored them and tried to move on.”

He said the new prime minister Dlamini was “a bit hard-headed and I think the king was looking for someone who won’t be a pushover.”

But Makhubu said it was also important that Mswati had rebuked his own ministers for shutting the door on structures recognised within Eswatini’s traditional tinkhundla system of government (it’s answer to convention democracy). Implicitly Mswati had also, therefore, absolved Simelane and the two other dissident MPs by presenting them as victims of poor governance rather than instigators of the ensuing violence as Masuku and other government officials had.

Makhubu said Mswati had not so much dismissed the rising calls for change as simply ignored them. “He was being his usual self. This was an absolute monarchy on display. He didn’t want to give his opponents credit or recognition by even mentioning them.”

Makhubu said the crowd at the sibaya was smaller than usual but it was difficult to say whether this was due to the opposition boycott call or concerns about Covid infection.

Opposition groups said many Swazis were furious that Mswati had simply ignored or ridiculed last month’s huge protests and made light of the deaths of protestors at the hands of security forces.

“King Mswati today showed his petulance and lack of statesmanship by ridiculing the protestors who were killed by his army recently,” the Swaziland Solidarity Network (SSN) said through its spokesperson Lucky Lukhele.

“In widely boycotted national Imbizo at the Royal Cattle Byre, the king was his usual rude self, talking like an intoxicated man at a shebeen. In particular, he labelled his deceased victims ‘mischievous marijuana smokers’ who ‘killed themselves’”.

“This is clearly an attempt by the king to provoke the nation to a reaction that he will put down using his army. We have been informed that these killings are not just punitive measures, to Mswati they are also ritual murders. As he was making his vitriolic utterances, his paramilitary police were assaulting people in Manzini where there was a peaceful protest planned.

“The Swaziland Solidarity Network {SSN} wishes to urge all comrades in the country to exercise restraint,” Lukhele said, in response to fears that opposition protestors would re-ignite a repeat of last month’s protests.

“The world has heard and seen Mswati for the lunatic that he is. There are already a few tangible processes under way which will ultimately result in this arrogant tyrant being forced to swallow his words.  Please stand firm and remember that freedom is never given on a silver platter.” DM