Historic protest march and king’s Sibaya are both happening today – which call will Eswatini heed? 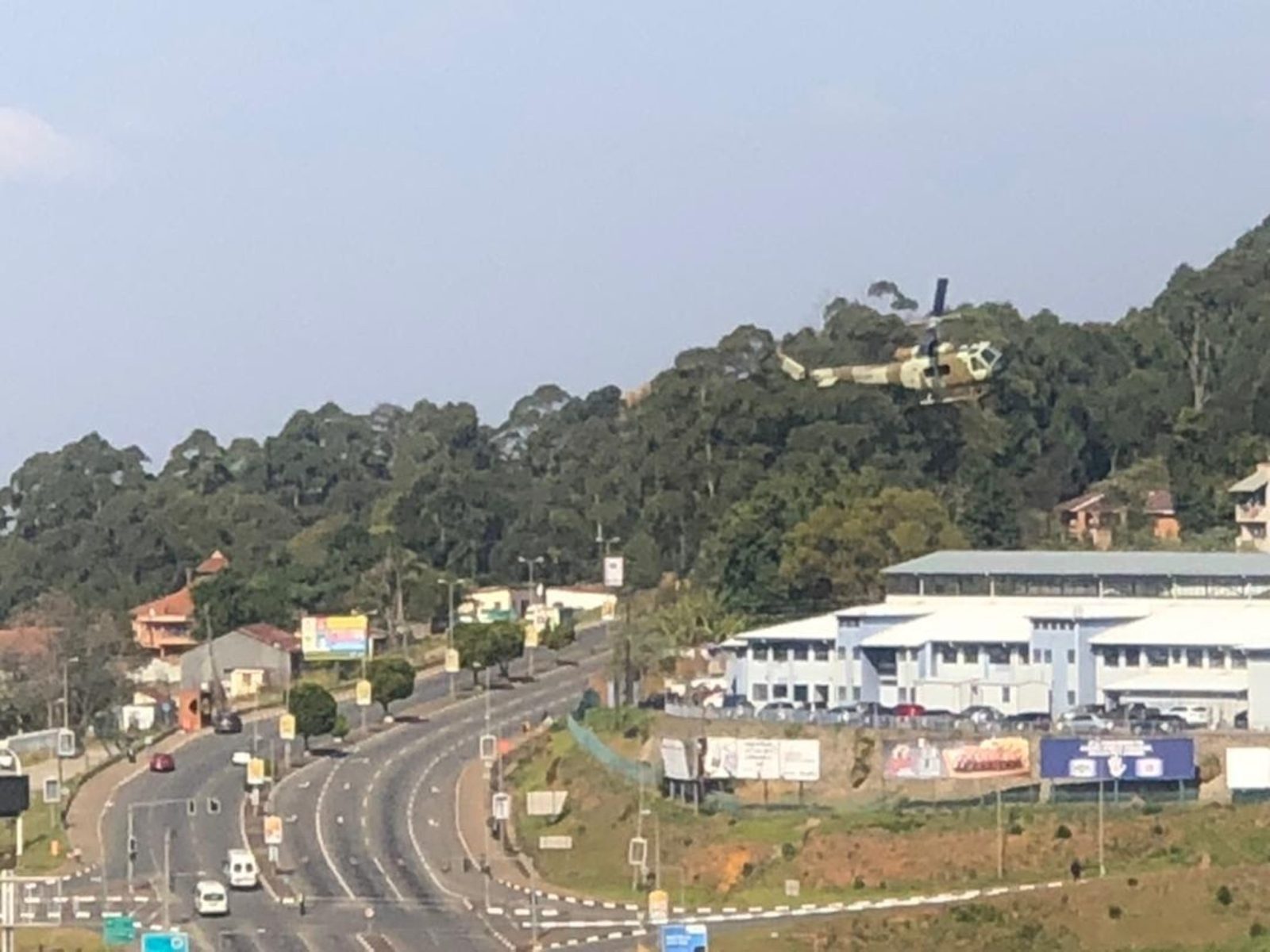 This picture, taken from a downtown apartment in the Eswatini capital Mbabane on Thursday, shows government helicopters hovering ahead of a historic protest march. (Photo: L Dlamini)

In the absence of an outcry from the world media over rights abuses inflicted upon activists, Friday’s march will be the biggest test yet for both the king and the pro-democracy movement – and could be a tipping point that may shape Eswatini for generations.

Amid the chaos in South Africa over the past few days, purportedly orchestrated by supporters of former president Jacob Zuma, it is easy to overlook what is happening across the border in South Africa’s neighbour, the Kingdom of Eswatini. Yet, as neighbours, and as the largest developed force for democracy on the continent, the events unfolding in Africa’s last absolute monarchy deserve our attention.

Three weeks ago, several simmering socioeconomic and political issues led to some of the most unprecedented pro-democracy demonstrations since the kingdom’s independence in 1968. Some groups initially took to the streets to protest against recent rises in and management of gender-based violence cases. This was followed by widespread public outrage and demonstrations over an alleged case of police brutality against a young law student. Other protesters have gone further, calling not just for the direct election of the prime minister, a position at variance with the king’s current constitutional power to appoint the head of government, but for the legalisation of political parties, multiparty elections and an end to the monarchy. Matters quickly escalated to encompass broader issues around economic disparity, poor service provision, democracy and human rights abuses. Petitions were delivered to inkhundla (electoral constituency) centres articulating many of these concerns.

(The matter of the prime minister is one whose urgency is heightened by the substantive vacancy in this office, following the death of Prime Minister Ambrose Dlamini owing to Covid-19 complications in December 2020.)

Unlike past disputes, these protests have struck a chord, led by a young, unemployed populace tired of watching royal offspring flaunt opulent lifestyles while most Swazis hardly manage to put food on the table. Two weeks ago, these protests – which included peaceful demonstrations, alongside unprecedented looting and destruction – were met with violent attacks by security forces, resulting in more than 70 confirmed deaths and 150 injured. Additionally, there were state-ordered internet blackouts, which severely disrupted communications and economic activity.

Eswatini has largely been left to sort out these issues internally. This time the Southern African Development Community (SADC) has taken notice, deploying a one-day fact-finding mission comprising foreign ministers from South Africa, Botswana and Zimbabwe. However, the mission did not yield much substance, particularly as meetings with civil society had not been arranged. The SADC team has now returned to Eswatini, presumably to undertake the consultations with various stakeholders that it failed to do on its previous visit.

Amid the sudden chaos, civil society has so far not coalesced around a single issue or demand, and several “dialogues” between groups representing opposition politicians, political parties, the church, the women’s movement and other civil society groups are ongoing. Last week, the Eswatini pro-democracy movement announced a peaceful “March for Change and Justice” planned for Friday, 16 July. The success of the march was immediately thrown in doubt when the king unexpectedly announced Sibaya, a mechanism unique to Eswatini and enshrined in the constitution summoning all citizens to participate in a dialogue with the king. The king’s motivation for hosting Sibaya is largely perceived as questionable given that it is scheduled for the same day as the march and traditionally, any events whose timing conflicts with customary events such as Sibaya are prohibited.

The Eswatini Crisis Multi-Stakeholder Forum, which represents a collective of pro-democracy political parties and civil society groups, has called the king’s announcement of Sibaya a “ploy to mislead the SADC Troika into believing we are a dialogue-driven nation and to create an impression that the national authorities do engage the people on issues of national importance, which is not the case”.

If the march proceeds on Friday it will be the biggest test yet for both the king and the pro-democracy movement. Under Eswatini’s constitution individuals have the right to “freedom of conscience, of expression and of peaceful assembly and association of movement”. Photos taken from downtown Mbabane on Thursday, though, already show government helicopters hovering. This, combined with road closures, security checks, and an ongoing curfew, suggests that Friday may not simply be a conflict between competing events, but a tipping point that may shape Eswatini for generations to come.

The current events are severely affected by regional and global events. Under normal circumstances the march would be in clear contravention of the government’s current Covid-19 regulations; but given that the king’s planned gathering will also certainly involve similar numbers, it would be hypocritical to prohibit the one and allow the other. Similarly, in any other time, one would expect a far greater outcry from the world media, particularly from South African groups, on the human rights abuses inflicted upon pro-democracy activists, yet none of that is playing out, for the major defeat suffered by South Africa’s own democracy this past week has crippled its own moral compass and rendered it incapable of effectively engaging in regional matters.

Despite the risks of Covid-19, the king’s attempt to control the narrative, and fear of government intimidation, it is expected that many Eswatini citizens will bravely and peacefully defy the king today with their own historic protest march. Although the world’s attention may be focused elsewhere, Eswatini has been building to this moment, and Friday could be the tipping point. DM