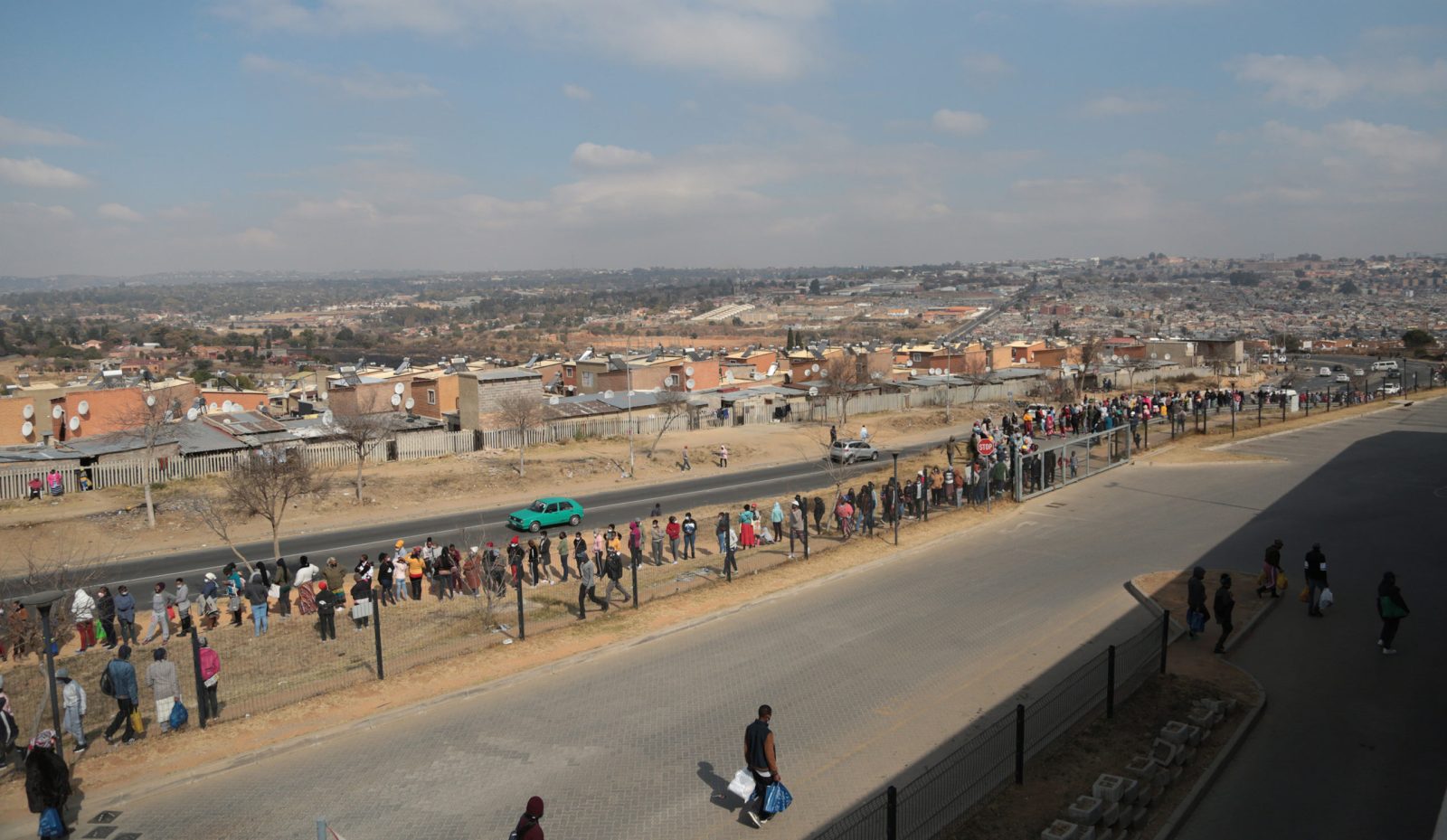 Hundreds of people wanting to buy groceries queue outside Alex Mall - the only shopping mall that was not looted during the sporadic looting, 15 July, 2021. (Photo:Felix Dlangamandla/Daily Maverick)

As violence eased after days of unrest across parts of Gauteng, communities reeling from the destruction came together to begin the long process of cleaning up and rebuilding what was lost. Law enforcement authorities meanwhile appear to be honing in on those who orchestrated the chaos.

Many Gauteng malls that were targets of looting and arson over the last week were still sites of activity on Thursday, but the acts of violence had been replaced with acts of civic duty as community members banded together to protect and clean their local facilities.

At least 45 people died during the violence in Gauteng, which erupted in the province last weekend after it spread from KwaZulu-Natal. In Gauteng, Johannesburg’s CBD and inner-city and townships such as Soweto, Katlehong, Vosloorus, Daveyton, Alexandra and Tembisa bore the brunt of what has been described as the most widespread unrest during the democratic era.

While parts of KwaZulu-Natal continue to experience unrest, the situation in Gauteng has continued to calm down since the SANDF was deployed on Monday 12 July. It could take up to two years to repair structural damage at some shopping centres but communities have started the clean-up process.

In Alexandra, residents were cleaning debris at the Pan Africa Mall on Thursday. In Soweto, communities had banded together to tidy Diepkloof Square and protect Maponya Mall.

Similar activities were reported in Daveyton at Mayfield Square and Daveyton Mall as well as in Tembisa and Vosloorus. Those affected and those wanting to lend a hand have offered their services in person and online through the RebuildSA Facebook group.

In a briefing on Thursday, the South African Council of Churches (SACC) called for an end to the violence and looting. SACC General Secretary Bishop Mpumlwana called on looters to return stolen goods and proposed an amnesty period of between a week or two “during which time anyone who returns goods will not be prosecuted.”.

Earlier on Thursday, Mpumlwana visited Ndofaya Mall, where at least 10 people died during the looting in Meadowlands, Soweto. The SACC also said a restoration fund should be established to assist businesses affected by looting and suggested using money recovered from State Capture cases.

“Today we stand in the midst of debris and brokenness. Over 70 lives have been senselessly lost to this mayhem,” said Mpumlwana.

“The debris of ruined commercial enterprises as big malls are hollowed and goods transporter trucks lie as waste on the roadside,” he continued.

“This is the brokenness of hope for families that put their life savings into their small businesses. We sit today with despair, as many communities in the affected areas may be without access to basic supplies for the days and weeks ahead.”

Communities affected by looting have reported severe shortages in access to basic goods while panic buying has limited available goods in unaffected areas.

A number of large retailers have committed to restocking stores and measures have been introduced to ensure there is available fuel at petrol stations, but supply lines in certain areas are strained while parts of the N3 remain closed.

As the violence slowly subsides in Gauteng, law enforcement agencies appear to be honing in on those who contributed to sparking the unrest after former president Jacob Zuma was jailed last week for contempt of court.

Deputy Minister State Security Zizi Kodwa told News24 he suspected the unrest was orchestrated and executed by former uMkhonto we Sizwe (MK) members who knew the tactics of the ANC’s armed wing, which was operational during apartheid. Police Minister Bheki Cele has said SAPS is looking at 10 to 12 people suspected of agitating violence.

TimesLive reported that authorities are investigating social media groups, including a WhatsApp group called “Shutdown Ethekwini” that was established last Thursday, a day after Zuma was incarcerated, and discussed plans to block highways and attack malls. The group included ANC members and government officials.

Fears that the looting would spread across the country have been unfounded. In Western Cape, misleading social media posts have spread fear and uncertainty, leading to a number of mall closures, despite no reported instances of related violence.

“An incident in Vrygrond area in Cape Town [on Wednesday] night was a service delivery protest and not a looting incident. No further incidents have been reported,” the Western Cape Provincial Disaster Management Centre (PDMC).

A message being distributed on social media saying that there is a threat to seven Cape Town malls is not true, Western Cape Premier Alan Winde told Cape Talk on Thursday morning.

The PDMC said the threat had been assessed and “it is not considered to be a major concern.” According to the PDMC, there is no need for malls to close at this stage and “should the situation change, this would be communicated immediately.” DM Additional reporting by Victoria O’Regan