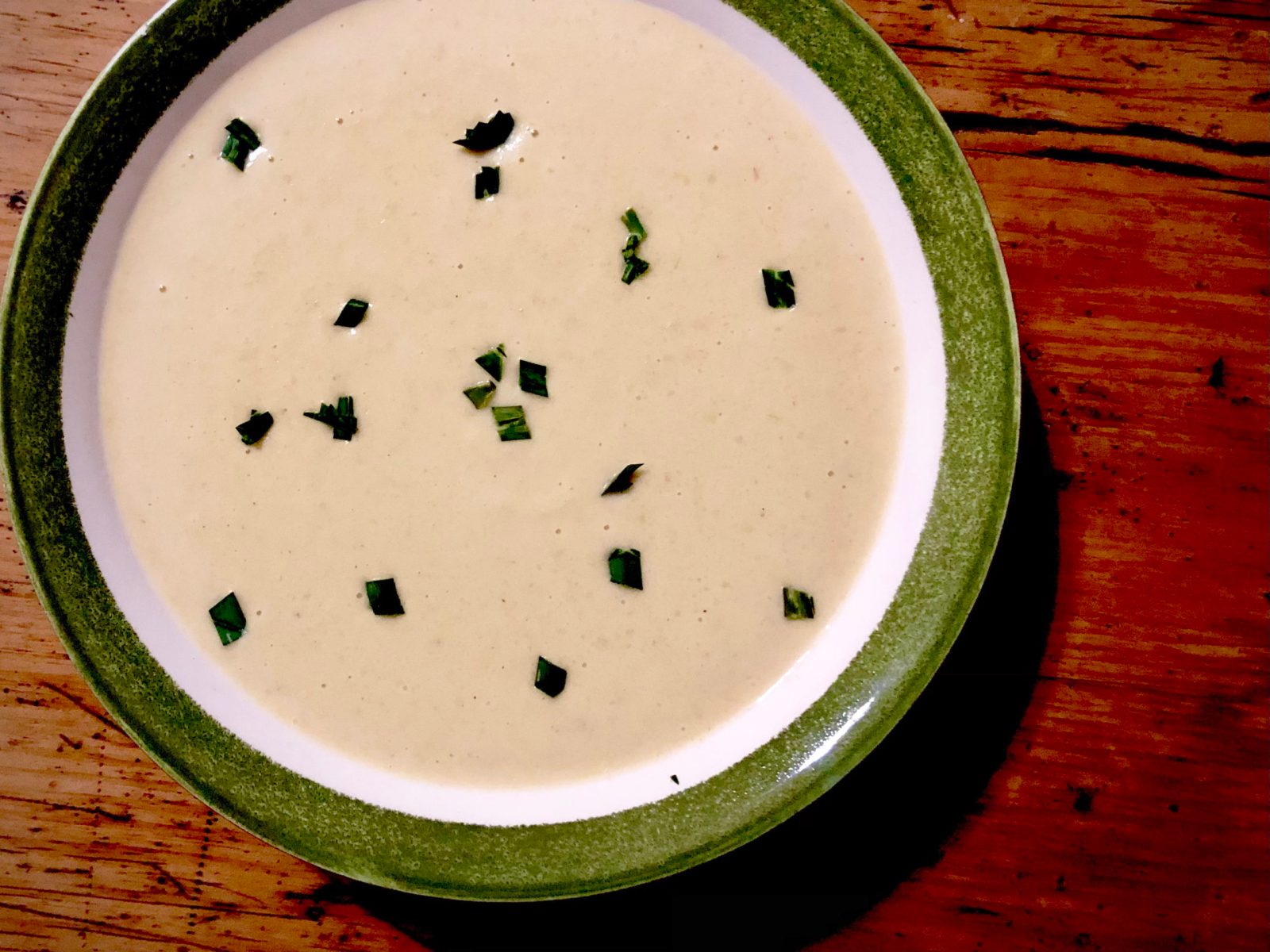 What’s the difference between Vichyssoise and leek and potato soup, anyone? Is it really simply that the first is cold, the second hot? In fact, that really is it. It’s the same thing. Sort of.

Having said all that, yes, if you serve a (formerly hot) leek and potato soup cold you will be able to get away with calling it Vichyssoise. You might want to dilute it with a little milk and chill it again before serving it. This would tie in perfectly with the Diat tradition, about which more below.

Whether it ends up being served hot or cold, leek and potato soup is generally made from leeks, potatoes, onion, sometimes celery, usually cream, and stock, most often chicken stock. It can only be made hot, to begin with, and only after its cooking is complete can it be cooled down and then chilled.

Leek and potato soup was popular in the 19th century in France where it was named Potage Parmentier after Antoine-Augustin Parmentier who made the tuber popular among the French. But this is not to ascribe the recipe itself to Parmentier.

The French chef Louis Diat told The New Yorker magazine in 1950 that when he was at the Ritz-Carlton in New York as a young man in 1917, “I reflected upon the potato and leek soup of my childhood which my mother and grandmother used to make. I recalled how during the summer my brother and I used to cool it off by pouring in cold milk and how delicious it was. I resolved to make something of the sort for the patrons of the Ritz.” He called it Crème Vichyssoise Glacée.

However. In 1869 the French chef Jules Gouffé had published a recipe for leek and potato soup in his book Le Livre de Cuisine, and the recipe (for the hot soup) is often attributed to him.

Another story, most likely apocryphal, has it that France’s Louis XV was, to quote Wikipedia, “so afraid of being poisoned and had so many servants taste the potato leek soup that by the time he tried it the soup was cold, and since he enjoyed it that way it became a cold soup”. But if that were true, how did Diat succeed in claiming responsibility for it decades later?

Julia Child, in her familiar throwaway manner and almost over-confident insouciance, called it “an American invention” and then made it all her own.

All of which will mean little to the Irish, for whom cooking and eating leek and potato soup is a national pastime and who would rather make it from leeks and potatoes, onion, chicken stock, perhaps garlic, possibly celery, but most likely neither cream nor milk. The thinking (and it’s true) is that the combination of cooked leeks and potatoes when puréed is creamy of its own accord. (As a good pasta chef knows, water when heated with starch attains a creaminess that does not require actual cream to be added. Ladle some of the cooked pasta water into your sauce and the job is done.)

Where does this leave us? Depending on the temperature you choose to serve it at, nobody’s going to arrest you for calling it either leek and potato soup or Vichyssoise. And, either way, the recipe is much the same, give or take, more or less.

It’s fair to conclude, I think, that Jules Gouffé first documented the recipe, and that Diat’s story about pouring milk into it once it had cooled and later calling it Vichyssoise has the ring of truth to it. Or at the very least the ring of a good story.

Here then is my way with leek and potato soup, and I did include garlic, and celery, and onion, and cream, so my recipe would lean more to the French way than the Irish.

I used vegetable stock but chicken is more traditional, so feel free. I’m just on a bit of a vegetable jag at the moment, doctor’s orders and all that. I also used plenty of leeks. Many recipes call, rather insipidly, for just 2 or 3. Come on. It needs a whack of leeky goodness to be worthy of its name. Whichever name you choose.

6 to 8 small to medium leeks

3 or 4 large potatoes, peeled and grated

1 litre to 1.5 litres vegetable stock (and extra water as needed if it seems too thick)

Sauté the chopped onions in butter until soft but not coloured. Add the sliced leeks, celery and garlic and sauté for a few minutes, stirring.

Stir in the grated potatoes and cook gently for 5 minutes.

Add the bay leaves, stock (use chicken if you prefer), season with salt and white pepper (it’s better than black pepper in soups), and bring to a simmer. Cook at a moderate heat until the potatoes are softened, about 20 minutes. Stir now and then to be sure it doesn’t catch.

Remove the bay leaves. Blend until smooth, then add the cream and return it to a simmer to simmer for 5 or so minutes more, gently. Taste, and adjust seasoning if you need to. Serve with chopped chives in the tradition of leek and potato soup. And of Vichyssoise. DM/TGIFood