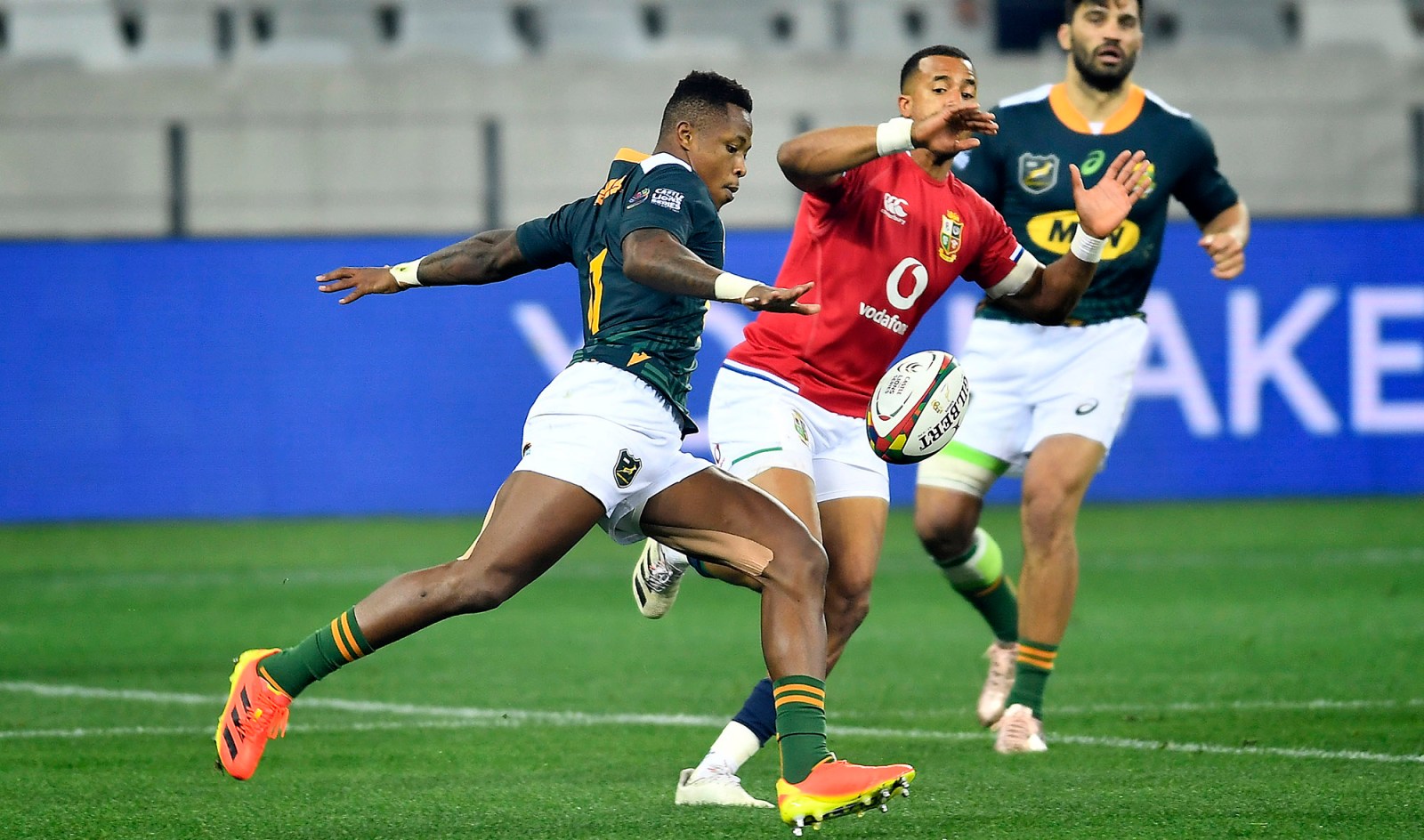 Sbu Nkosi of South Africa ‘A’ prepares to kick ahead during the Tour match between South Africa A and the British and Irish Lions at Cape Town Stadium on July 14, 2021 in Cape Town. (Photo: Ashley Vlotman / Gallo Images)

A 13-man South Africa ‘A’ gave the touring British & Irish Lions a bloody nose with a 17-13 win at Cape Town Stadium on Wednesday night, which has added a needed edge to the tour.

South Africa ‘A’ produced a belligerent performance worthy of Test match status in the unofficial fourth Test, to inflict a first defeat on the 2021 British & Irish Lions, despite being reduced to 13 men at one stage.

After a week of civil turmoil in South Africa, stand-in coach Rassie Erasmus said he wanted the team to give the country a bit of hope. They more than delivered with a performance that was a metaphor for the best of the country.

SA ‘A’ had less possession and territory, they had two men in the sin bin at the same time, they had a centre playing No 8 by the end and were on the wrong end of the penalty count. Yet, through committed teamwork, individual excellence and sheer bloody-mindedness, they held the more settled and cohesive Lions at bay.

It was a marker laid down in dayglo green for the three-Test series starting on 24 July. The Lions could just as easily have won Wednesday night’s game. But they didn’t, despite having almost every advantage in the match. That will furrow some coaching brows in the coming days.

It was a result the tour needed, although the Lions might disagree after their second-half superiority. They were stunned by the ferocity of SA ‘A’ in contact and swamped by a defence that looked like it had spent 20 months waiting to be properly unleashed.

Georgia provided a nice warm-up for South Africa in an official Test 10 days ago, but SA ‘A’ rekindled memories of 2019 with their sheer physicality. They smashed the Lions on the gain line, providing an eye-wincing precursor of what is to come in the Tests.

“I’m proud of the team; we now know where we are at, and we can analyse where we need to improve,” SA ‘A’ captain Lukhanyo Am said.

“We are happy with the performance and excited to be back in the mix. There is lots to build on. It was a tough outing; we certainly took some knocks and bruises.”

The tourists lost the aerial battle, with Boks wings Sbu Nkosi and Cheslin Kolbe handling the assault comfortably while creating problems when fire was returned from the boots of Faf de Klerk and Morné Steyn.

There were also two excellent tries for the home team — one for Nkosi after an Eben Etzebeth charge down deep inside the SA half, and the other for Am. The Lions only breached the SA line when the home team were reduced to 13 men. That will be a concern for the tourists, who had scored 181 points in their first three tour matches before this.

SA ‘A’’s second try was made by sheer brilliance from Cheslin Kolbe, who collected a kick in 20m of space. For a man who needs 20cm to create havoc, this was too easy. He slashed through defenders Chris Harris and Louis Rees-Zammit and offloaded to Am while being tackled by Elliot Daly. The SA ‘A’ skipper somehow anticipated where the dancing Kolbe would finally offload to complete the move.

The Lions trailed 17-3 as the first half drew to a close and they had hardly been in the game. They had enough possession and decent territory, but they never looked like scoring until the final two minutes of the stanza when they pounded the Bok line.

Referee Jaco Peyper yellow-carded De Klerk for what appeared to be a legitimate tackle and then Marco van Staden for repeated infringements close to the line within a minute of each other. Yet, still, the 13 men repelled the Lions until the break.

The resistance briefly gave way early in the second half when the two-man advantage eventually told with a close-range try for prop Wyn Jones.

The Lions dominated the second half, but stubborn defence kept them at bay. Although the result was not what the Lions wanted, their positive second-half fightback was something to take away from the contest.

The tourists also endured some pre-match disruption, which might have contributed to their slightly passive start.

Flyhalf Dan Biggar withdrew due to an ankle injury picked up in training, and Owen Farrell was called in to start at No 10.

Wing Josh Adams, the tour’s leading try-scorer, also cried off for the wholly acceptable reason that his partner was about to give birth. He watched the joyous moment on Zoom from the team’s hotel. This is the nature of touring in a Covid-19 world.

It was a result the tour needed, and it was a performance the South African camp needed after one match in 20 months and almost no training sessions due to Covid-19 isolating in the past two weeks.

“We needed a hit out against a strong side; the physicality was a different level tonight. We learned a lot of things,” Lions captain Conor Murray said after the match.

“But we can be proud, we came back from 17-3 down and corrected things in the second half. It was really physical, we haven’t come up against that yet on this tour and the breakdown will be huge in this series.

“The loss doesn’t mean a lot; we can learn from the first half — that if we start slowly against this side we will lose.”