Looting suspects have their first day in court

Looting suspects have their first day in court 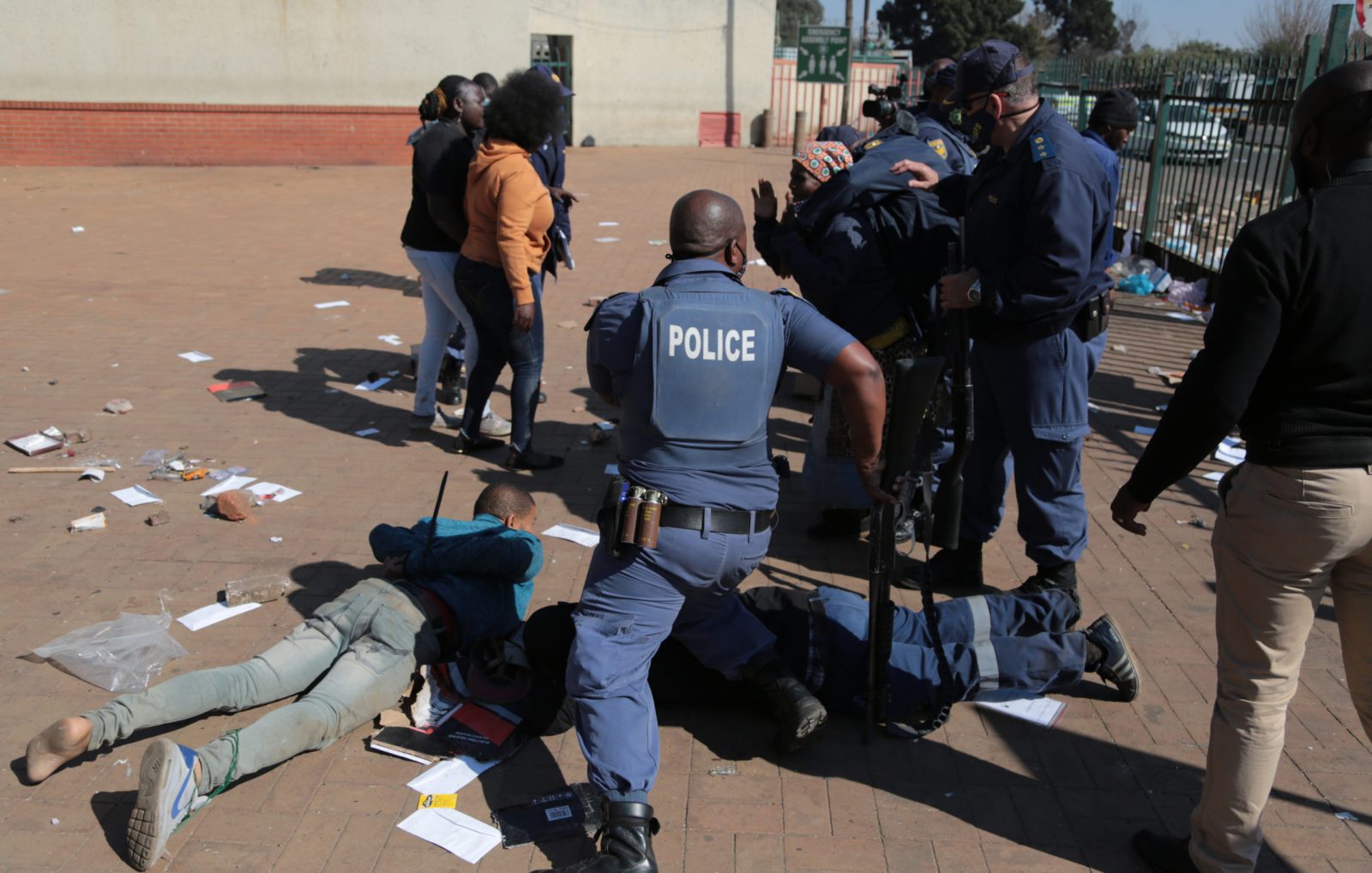 More than 140 people arrested for public violence, malicious destruction of property and contravening the Disaster Management Act appeared in courts across Gauteng on Tuesday, 13 July.

Daily Maverick on Tuesday visited the Johannesburg Central Magistrates’ Court, where 111 of the 142 people appearing in Gauteng courts that day in connection with the spree of violence and looting that has racked Gauteng and KwaZulu-Natal had their first court appearance.

The National Prosecuting Authority (NPA) said in a media release on Tuesday that, “Those who choose lawlessness to destroy our country and its people must expect to face the full force of the law. The rule of law, one of the basic tenets of our hard-fought democracy, must prevail.”

Most of those arrested came from Hillbrow and Jeppe police stations, with the others coming from Cleveland, Sandringham, Hillbrow, Yeoville, Booysens and Johannesburg Central SAPS stations.

The most common charge was public violence. Other charges included housebreaking with intent to commit an offence, theft, contravention of the Disaster Management Act, robbery with aggravating circumstances and possession of suspected stolen items.

The suspects had been in jail cells the whole weekend, and this was their first court appearance.

One woman in the dock was crying softly. A prosecutor, who wishes to remain anonymous, said the woman had told him that she didn’t steal anything, and was just in the wrong place at the wrong time when a group of looters was arrested.

“I believe her,” said the prosecutor.

But the prosecutor was not as sympathetic with the other alleged perpetrators. When asked whether he thought their motive was political or if they were just desperate, he responded, “No, it was a criminal offence. These people didn’t steal food, they stole TVs, alcohol… luxury items.”

The unrest cases have been allocated to experienced prosecutors who will be working closely with the South African Police Service (SAPS) to guide investigations.

After their rights were read, the magistrate swiftly postponed their case and the accused were led out of the courtroom by police officers, many shuffling out with their hoods up and their hands in their pockets.

Then the magistrate was handed another charge sheet, and a similar process was repeated.

All the cases were postponed as police needed time for further investigations, and all the accused were remanded in custody, with their next court appearance on dates ranging between 19 July and 27 July.

Most of the accused who appeared in Johannesburg Central Magistrates’ Court were in their 20s and 30s. Most were South African, with several from Zimbabwe and one from Malawi.

There were 18 dockets in total at the court on Tuesday, the largest docket containing 15 people. The members of this group, most of whom are South African, with four from Zimbabwe, are accused of public violence, malicious damage to property and contravening the Disaster Management Act (out after curfew).

The charge sheet reads, “On the 11th of July the accused broke and entered a bottle store and started removing liquor from the liquor store. The accused were arrested inside the store.”

In another case, two people were charged with public violence, business breaking and malicious damage to property.

The summary of facts stated, “A1 [the officer who opened the case and who arrested the accused] who is employed by JMPD reported on duty and he was patrolling at Jeppestown with his crew members. On their arrival the complainant spotted a car dealership which was burning and the people were shouting saying there were people inside, busy stealing.

“A1 and his crew entered the garage and found 2 suspects inside the garage.”

Another alleged perpetrator was accused of public violence and business breaking, the summary of facts reading, “On the 11th of July 2021, A1 who is employed as a police officer, received 2 complaints of business breaking and theft at Super liquor around Johannesburg area.

“He found a group of +/- 30 men breaking and damaging the bottle liquor store. When the group of men saw the police they threw rocks at them and A1 managed to apprehend the suspect.”

The other 31 alleged perpetrators from Gauteng appeared in Alexandra (18), Germiston (10) and Tembisa (3) magistrates’ courts on Tuesday.

On Monday, the NPA said in a press statement, “As South Africans, we have the right to voice our opinions and express our discontent through various lawful channels, including peaceful protest action. However, violent protests and criminal looting undermine the rule of law, and will damage our country’s economy and development prospects, at a very difficult time when we are in the grips of a debilitating third wave of the Covid-19 pandemic.

“We urge our fellow South Africans to  exercise restraint, to respect the rule of law, and to utilise lawful means to protest and make your voices heard; otherwise, nobody wins.” DM