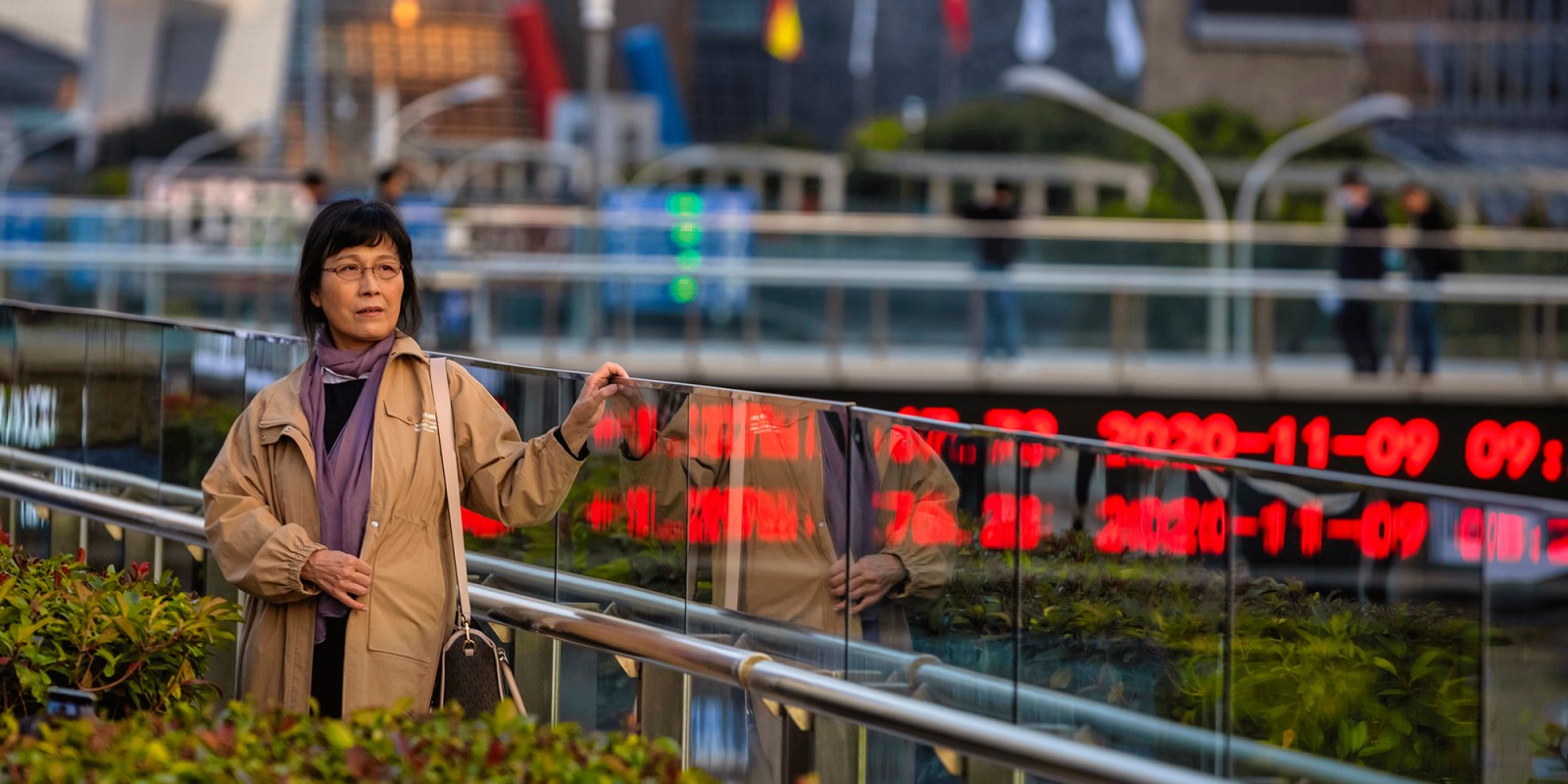 Concerns about a slowdown in the Chinese economy were alleviated when second-quarter growth came in just a smidgen below expectations. However, risks do prevail and recent central bank decisions to add liquidity to the economy show stimulus measures are not a thing of the past.

First into the pandemic and first out, the trajectory of the world’s second-largest economy, China, has great significance for the rest of the world. So the news this week that growth was still chugging along and retail sales had started picking up left economists and financial markets breathing a sigh of relief.

There was some nervous anticipation ahead of the release of the GDP and other key economic indicators on Thursday, with concern that the V-shaped recovery may be stalling. It didn’t help matters that the Chinese central bank cut the Reserve Ratio Requirement (RRR) by 50 basis points, effective Thursday, and also rolled over its Medium Term Loan Facility (MTLF). These decisions were interpreted as a sign that the authorities were concerned about a slowdown in the pace of economic activity.

However, the 7.9% year-on-year second-quarter GDP figure came in only slightly below the Bloomberg consensus forecast of 8% and keeps the economy on track to achieve at least the Chinese government’s 6% targeted growth rate. Most encouraging was the pick-up in retail sales in June, which grew by 12.1% versus a Bloomberg survey estimate of 10.8%. The pick-up in spending will be welcomed by a government seeking a more balanced, and internally focused, future growth path. 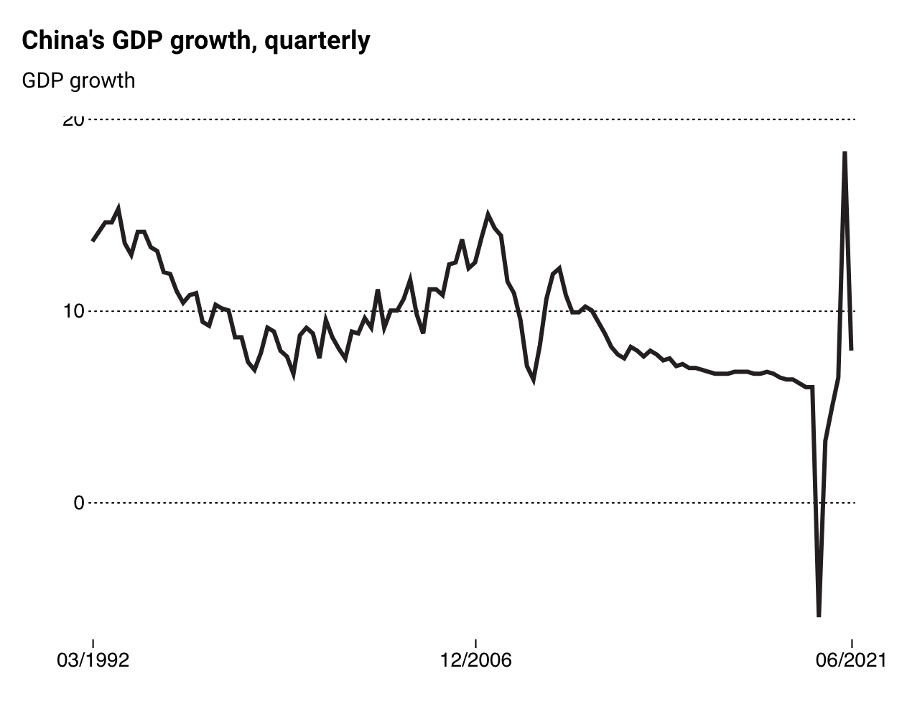 Fixed asset investment did undershoot expectations, with growth of 12.6% in the first half of the year versus the 16% median signalled by a Bloomberg survey. The slowdown may be a result of semiconductor chip supply problems but could also reflect a deterioration in economic confidence.

ING Greater China chief economist Iris Pang believes it is both and that the risks to Chinese economic growth are mounting even though the latest economic data were “not too bad”. She says that the roll-over in the MTLF and the RRR cut is significant because “this is a big signal that the economy needs liquidity”. She attributes these latest decisions, and the likelihood of another RRR cut in the next quarter, to the risks of bad loans in the banking sector, weaker fixed asset investment momentum and the internal and external technology war the government is facing.

This week, US Treasury Secretary Janet Yellen said the US will not engage in regular talks with China and added 25 Chinese technology companies to the US entity list. These decisions further fuel the likelihood of a US-China decoupling that would have far-reaching implications for China, as well as the global economy.

Pang notes: “This all points to the technology war that China is having to face, and this will affect how China can source necessary electronic components to manufacture their own technology products.” She adds that the government’s efforts to internally reform fintechs and data privacy practices will put downward pressure on short-term growth but, more encouragingly, will reduce risks to the economy and the financial system in the future.

Though the latest Chinese economic data didn’t disappoint, and indicated the economy may be plateauing rather than losing impetus, the decision to reduce the RRR and roll over medium-term loans does indicate that the government and central bank are not yet ready to allow the economy to go it alone and will continue to provide stimulus and support where needed. That is significant because, until these moves, China was being far more deliberate and proactive than the US and Europe in its efforts to withdraw stimulus measures and, in so doing, avoid any chance of overheating the economy.

As the forerunner in the race to put the pandemic behind us, China’s recent decisions highlight that cutting stimulus lifelines is going to be more difficult than expected and that monetary policy and fiscal stimulus measures are likely to be here for some time, in some form or another.

It’s a stance that came through in US Federal Reserve chairperson Jerome Powell’s speech to the House Financial Services Committee this week, when he put forward a more dovish argument than expected after US inflation had surprised to the upside again. He continues to assert that inflation will become more subdued in the months ahead and that, while progress has been made in the economy, there is still some way to go before the central bank will be put in a position where it needs to tighten the reins.

Until now, China’s V-shaped recovery, which began as early as the second quarter of 2020, has provided impetus for the rest of the world mired in on-off pandemic-related economic shutdowns over the past year and a half.

A succession of strong quarterly growth rates over the past year, fuelled by high levels of industrial production required to support strong export volumes, have been behind the super-strong run-up in commodity prices over the past year, which has seen the Bloomberg Commodity Price Index rise 55% since its March 2020 nadir.

This vigorous demand for commodities has benefited commodity-producing emerging markets like South Africa in their time of need, buoying trade surpluses and making up for on-off internal economic activity as a result of different degrees of economic lockdowns.

Thus, any sharp fall-off in Chinese economic growth or demand would undermine one of the few pillars of growth propping up emerging economies as they battle to make material progress in vaccinating their populations and, in many instances, riding out third waves of infections fuelled by the hyper-infectious Delta variant.

For South Africa, a commitment to sustained economic support in the US and China is good news right now. The country can ill afford any deterioration in the global economic environment, as it faces the dire domestic economic consequences of the widespread looting in Gauteng and KwaZulu-Natal and the wholesale destruction of many retail outlets and critical supply chains. BM/DM