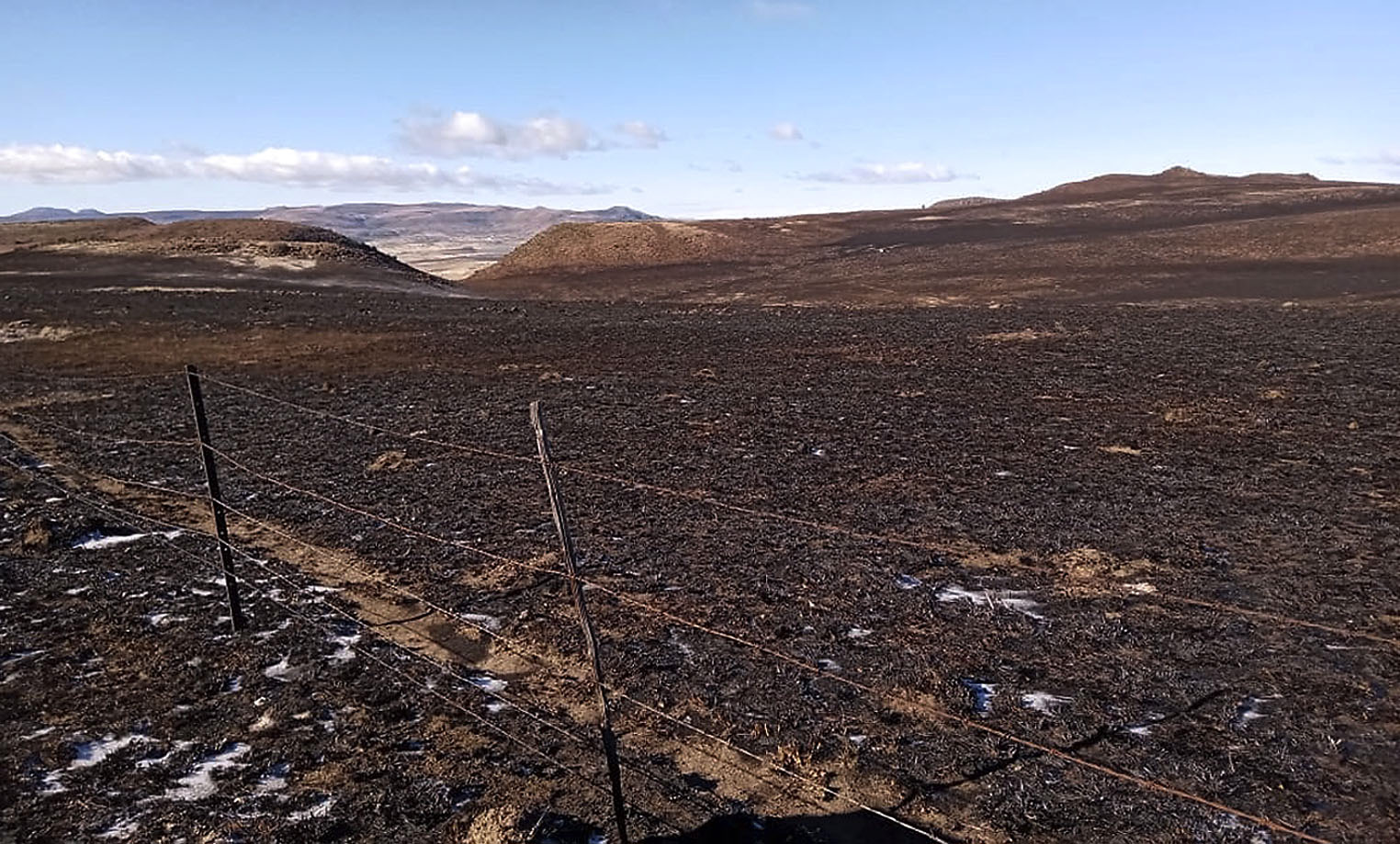 Veld fires have burned at least 5,000 hectares of grazing land in Dordrecht in the Eastern Cape. Around 15 head of cattle sustained severe burns and had to be put down.

Farmers in Dordrecht, 70km from Komani ( formerly Queenstown) in the Eastern Cape, are left counting the costs of veld fires that destroyed more than 5,000 hectares of grazing land on Monday.

About 15 head of cattle had to be put down after being burned in the blaze which started near the Dordrecht dam.

Speaking to Daily Maverick, Clarke’s Siding farmer Brett Catherine said Monday’s fire was the third fire they have had to extinguish in two weeks. He believes the fires are not started by natural causes.

“The first fire started about a week ago and we managed to extinguish it. Then last Friday, a fire started near town and burnt about 1,000 hectares,” he said.

Catherine said although they do live in a high fire risk area, he believes the recent blazes were started by people in town. The ongoing drought in the area makes the area particularly vulnerable to fast-spreading fires.

“We have strong winds in winter and it is dry, making it easy for these fires to spread. We would have been able to manage if these fires were caused by natural causes. But people just light fires when the wind is at its worst, making it hard for us to control the fires,” Catherine said.

Farmer Carl Miles said the latest fire started around midday on Monday, adjacent to the Dordrecht dam, and was finally extinguished that night.

“It (fire) was deliberately started beyond our firebreak to cause maximum damage. The wind was howling and it was impossible to control the fire. It was intentionally set,” he said.

“In total, there are approximately 5,000 hectares that burnt and, beside the loss of grazing land, there is incredible damage to infrastructure. This includes fencing, water pipes, water crafts and trees which are strategic wind brakes,” said Miles.

“In Snowden and Snow Hill there are approximately 15 head of cattle that were severely burned and had to be slaughtered by the vet on Tuesday morning,” he said.

He added that it took considerable effort by commercial farmers from the Snow Hill, Indwe and Cradock farmers’ associations to fight the wildfire.

“Fortunately the front of the fire ran into the former Transkei and was extinguished by the natural terrain of the escarpment just through the boundary fence. There was no loss of people’s lives… it was only the 15 head of cattle and it would have been more if the farmers had not come together to fight the fire,” said Miles.

He said it was heartbreaking to see their hard work go up in smoke.

“It is all gone and we have to start from scratch again,” he said.

Miles said farming as a profession was difficult enough on its own. “You never knock off… you work from eight to five, Monday to Sunday.  Farming is a 24-hour job. To have things like arson and combine that with drought makes things worse. It’s never easy,” Miles said.

“The carrying capacity of these 22 camps was 300 cattle per annum. We have eight casualties and we are still assessing the injuries.  Further damage is still under assessment,” said Sibeko, worrying about what he is going to do to feed his cattle.

“I will need approximately 700 roll-bales of lucerne for the next four months. I’m crossing my fingers for the rain,” he said.

The Eastern Cape is in the grip of a relentless drought and many dams in the region are drying up fast. DM/OBP