#CleanupSA — picking ourselves up: South Africans show solidarity and community spirit in aftermath of public violence 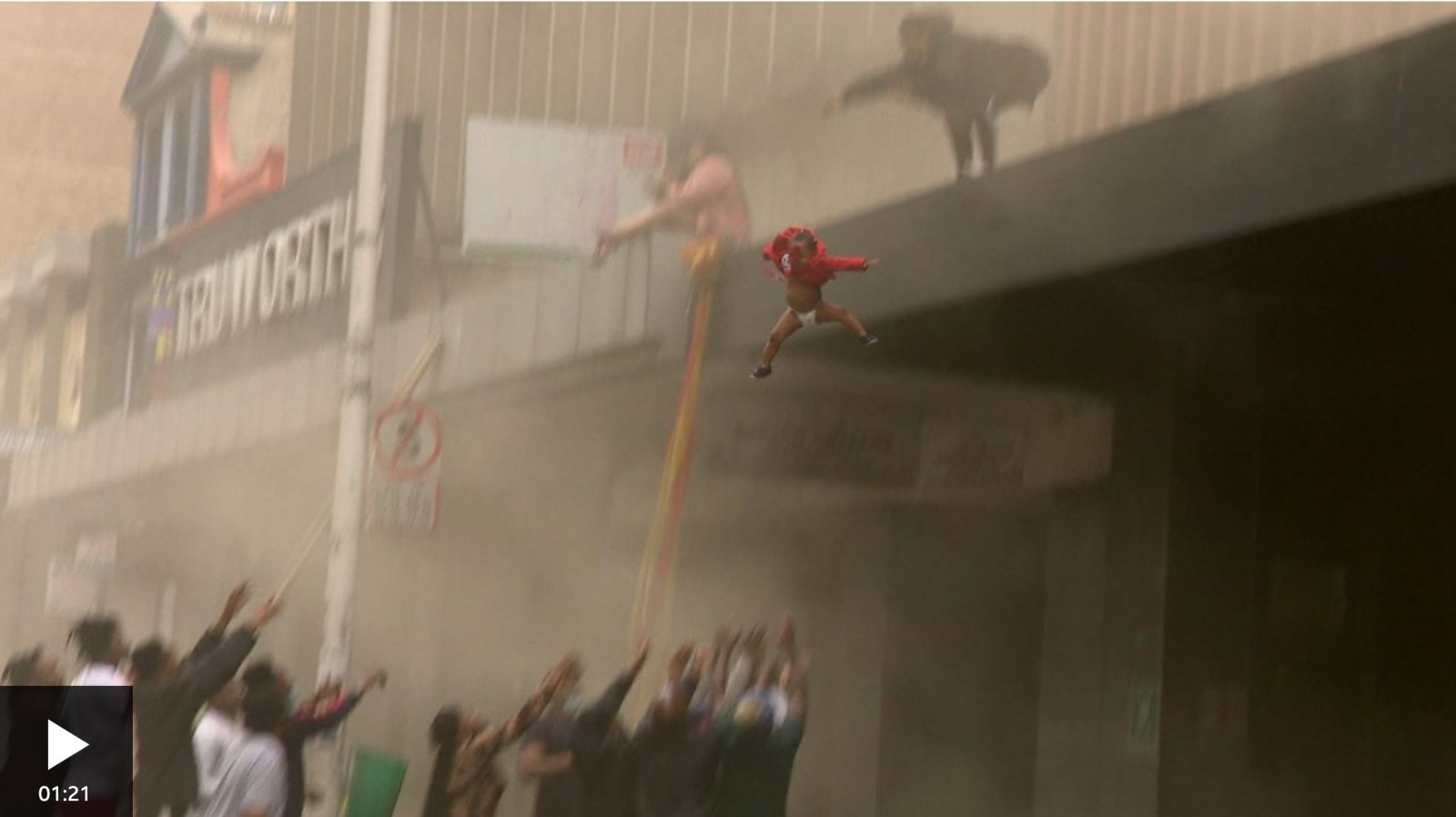 A mother in Durban, eastern South Africa, was forced to throw her baby from a building after it was allegedly set on fire by looters. (BBC still).

This past week not only revealed to us the vulgarity and the violence of a disastrous scheme to destabilise the country, but also the capacity for solidarity and community in the face of a total collapse of law and order.

In the startling spool of images and footage to emerge from convulsions of violence and looting that have taken place in parts of KZN and Gauteng and which spread after the imprisonment of former president Jacob Zuma, many have stood out.

But one in particular begs for a moment of pause.

It is a still taken from footage captured by BBC videographer and producer Thuthuka Zondi of two-year-old Melokhule Manyoni in freefall — dressed in a nappy and red hoodie — from the second floor and then the roof overhang of a burning Durban building.

The child was saved when she was caught in a human safety net made up of the strong, collective, outstretched arms of strangers.

“All I could do was trust complete strangers,” the child’s mother, Naledi Manyoni, told the BBC afterwards.

In many ways, South Africans have been dropped, steadily and slowly.

Dropped from a great height by a government and a ruling party crippled by the Zuma kleptocracy, performative nationism and factionalism and into the arms of strangers and each other.

And while at first terror and fear gripped those who found themselves caught up in extraordinary scenes of apparent mayhem, it soon dawned — in that moment — that they, we, were on our own.

In the lacuna, many were killed, many lost everything.

The death toll so far is at least 72, with many businesses, already in the grip of a Covid-19 economic disaster, obliterated in the frenzy.

Then images began to emerge of people shot dead along roadsides, of armed, speeding residents hunting down suspected looters.

As the regions were gripped by unprecedented displays of lawlessness together with attacks on transport routes and infrastructure and egged on in real time by agitators on the ground and on social media, we knew there was something different to the quality of this violence.

There was something very “five minutes to midnight” about it. It threatened to turn KwaZulu-Natal into a Kingdom of Ash.

It was different from the routine expression of frustration and protest citizens have become accustomed to deploying to engage a deeply flawed and unresponsive state.

But this past week not only revealed to us the vulgarity and the violence of a disastrous scheme to destabilise the country, but also the capacity for solidarity and community in the face of a total collapse of law and order.

Across the country, in the aftermath and rupture caused by the rampage, people began pushing back, cleaning up, confiscating looted goods and offering help and resources to those who had been affected.

These are the same South Africans who have been hammered by the Covid-19 pandemic in the worst possible economic conditions.

If you need deeper insight into those who have been left behind, go with Tshabalira Lebakeng into a world that is a reality for far too many in modern, democratic South Africa.

These are the same South Africans who found it within themselves during the first hard lockdown to feed the starving in a harsh cold winter.

The same South Africans who have been filling potholes, fixing infrastructure, growing food, caring for children on meagre pensions and grants.

Among these South Africans are young journalists, those who might not have been born when their older colleagues found themselves witnessing the same trauma and terror in the apartheid era, who stood their ground.

They were our eyes and ears and they reported from all over as they faced attacks and insults. They held officials to account. They called the attempted insurrection for what it was.

Taxi organisations, including the South African National Taxi Council (Santaco), were among the first to announce they would be out “in full force” to protect shopping malls in Gauteng.

On Wednesday Santaco-KZN Durban Central Region taxi owners began to clean up the city. In KwaMashu communities began to sweep their own streets.

In Inanda, KwaMashu and Ntuzuma WhatsApp groups were set up to encourage volunteers and mopping up began.

In Diepsloot, people, many of them volunteers, collected looted goods and returned them to the mall, in Mooi River communities began to collectively clean up the mess from the mayhem.

On Facebook, the Rebuild-South Africa Volunteers Group, started by seven administrators on Monday, already had 33,000 members by nightfall the following day.

“Here, we will connect affected businesses with our wonderful spread of volunteers. Please spread the word so we can reach those who need the help” reads the biog in the “about” section.

On Wednesday the Shoprite Group issued a statement that it would “restock and rebuild” affected stores in KZN and Gauteng.

“We are especially grateful to our loyal customers, many of whom have reached out and offered to help with clean-up operations and want to assure our customers that we are working day and night to continue to feed and support the nation.”

The group also thanked its employees for continuing to serve customers, and “for going the extra mile under extremely trying conditions”.

The events that have tragically played out since Jacob Zuma’ incarceration have finally revealed what was always going to be his endgame — to not go gently or account for the estimated R54-billion siphoned off from the public purse for 10 years while he was president.

Those who benefited are prepared to go down with it all. We will not.

We have shown ourselves to be extraordinary and beautiful — between the blood, bullets and wretchedness. South Africa, take a bow. DM