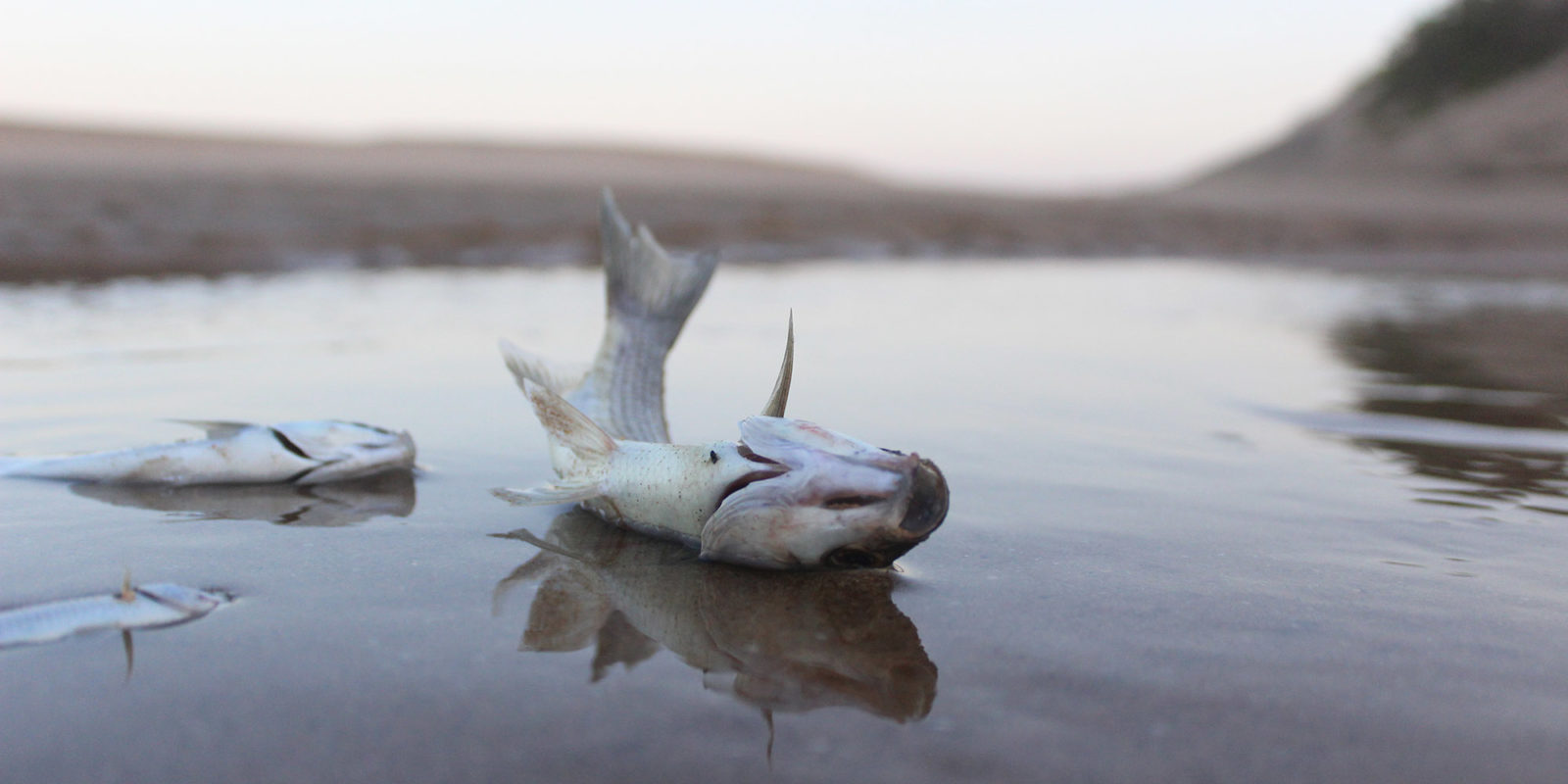 Amid the human tragedy from violence and looting in KwaZulu-Natal, the impact of arson attacks on chemical plants and warehouses has also spilled out to poison fish in local rivers and the Indian Ocean.

Thousands of fish and other marine creatures have begun washing up in a river lagoon and on beaches north of Durban after poisonous effluents poured into the sea in the aftermath of numerous land-based arson attacks.

The uMhlanga estuary turned turquoise on Thursday, leaving thousands of fish and prawns dead or gasping for breath, while crayfish, crabs and octopus were also reported to have washed up on beaches next to uMdloti.

When Daily Maverick visited the uMhlanga Lagoon late on Thursday, the river estuary was littered with dead fish, prawns and other organisms. A strong chemical stench also permeated the air.

Though the exact source of the pollution has yet to be pinpointed, sources suggest that the deliberate torching of a farm pesticide/chemicals factory near Cornubia is one of the most likely sources of the pollution.

At uMdloti Beach, further to the north, residents have posted video clips of dead crayfish washing up on the beach, along with voice messages reporting that marine fish, octopus and crayfish were being eaten by seabirds.

The eThekwini (Durban) Municipality has confirmed the reports of dead fish and crustaceans around uMhlanga and uMdloti lagoons and some beaches in the vicinity.

“While the exact cause of this remains unknown, it is considered serious and can affect one’s health if collected and consumed. The public is therefore advised to refrain from all recreational activities, including fishing or surfing, bait collection and picking up of dead species in this area.

“Collecting or harvesting of any marine living resource in the area is temporarily prohibited until the cause is determined and the threat has abated,” the municipality warned in a statement, adding that authorities were investigating the source of the pollution and that cleanup companies were trying to contain the spill.

While some surfers and spearfishers have called on authorities to block off rivers to prevent pollution from reaching the sea, marine and estuary scientist Nicolette Demetriades has cautioned strongly against this – noting that strong tidal currents from the sea would help to disperse and dilute the pollution.

Any attempt to block river water flowing into the sea would result in poisons being restricted inside river estuaries rather than being diluted naturally by the power of the sea.

Meanwhile, the Bidvest Group has warned that south of Durban, one of its warehouses in Mobeni remained at high risk of releasing up to 500,000 litres of “extremely hazardous chemicals”.

The group has issued a public safety advisory that one of its chemical facilities in South Coast Road contains thousands of litres of highly flammable chemicals and that warehouse sprinkler systems and other control systems had been damaged by looters.