‘The situation is bad’: State hopes 25,000 troops will douse the flames of the insurrection 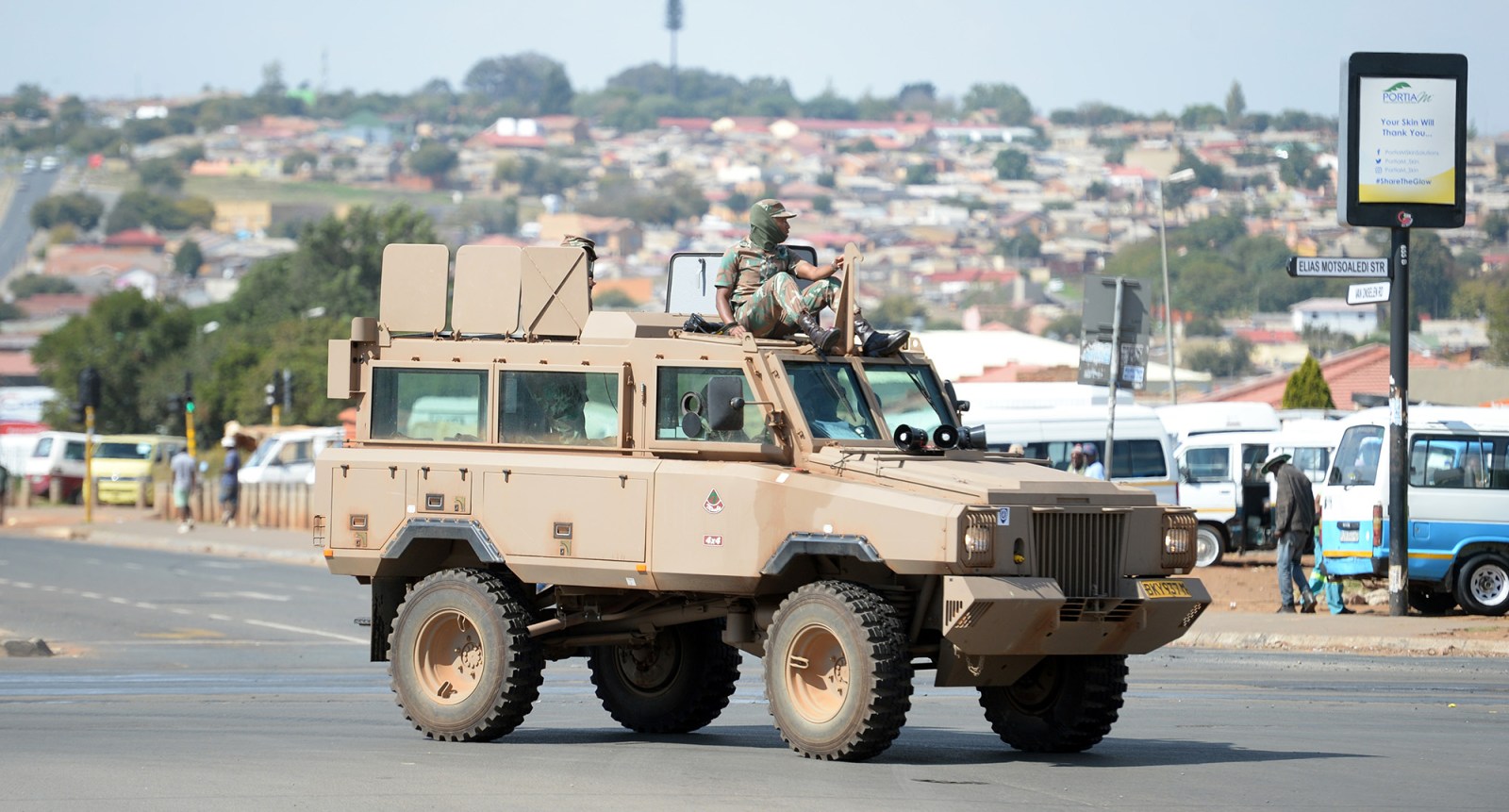 The government was caught by surprise as marauding mobs caused damage estimated at R15bn to businesses and a loss of about 200,000 jobs in KZN, but it hopes that consultations and a 25,000-strong troop deployment might douse the flames of the insurrection.

Defence Minister Nosiviwe Mapisa-Nqakula was praised by MPs when she told a parliamentary portfolio committee on Wednesday that the SA National Defence Force (SANDF) will increase its deployment to trouble spots to 25,000. This is the SANDF’s biggest deployment since 1994, according to Darren Olivier, director at African Defence Review.

He pointed out on Twitter that this number “means reaching to the very back of the cupboard and taking everything that can move, no matter the cost or sustainability. It leaves nothing in reserve & halts all other SANDF duties & commitments. It’s a reflection of just how desperate things are.”

Some opposition MPs have requested a deployment of 75,000, which was a number incorrectly mentioned before as the deployment during the Level 5 lockdown, but Mapisa-Nqakula said 25,000 was a compromise and up from the 10,000 troops the SANDF originally planned to deploy.

“The situation is bad in KwaZulu-Natal,” the minister said in a marked change of tone from four days before, when she said a troop deployment wasn’t necessary because there was no war.

On Monday President Cyril Ramaphosa announced the deployment of 2,500 troops, of which 1,000 went to KwaZulu-Natal. Of these, 800 were deployed in the eThekwini Metro, mostly at key points such as the airport and hospitals, Mapisa-Nqakula said.

She admitted that the government had been caught unawares over the large-scale looting of malls, which is why soldiers weren’t sent there, while the police response proved to be woefully inadequate.

The mere presence of the army could have prevented the massive amount of damage done to businesses, and the food security crisis that has resulted from the cleaning out of supermarket shelves by the mobs and the closing of highways to freight trucks.

Mapisa-Nqakula told MPs that when the army arrives the trouble-makers usually leave, even if only until the soldiers head off.

The most devastating admission of all, however, was when she said about the mall looting: “There was intelligence, but I think it came too late.” She said the security cluster did not have information that malls would be looted, even though there were social media posts to this effect.

“When we went to secure the national key points, it never occurred to us that we should move into areas like malls, because there is always a contract between malls and private security companies,” she said.

“What we have learnt is for police to have regular contact with private security at the malls. They are the ones with the first action and should link up with police.”

But the penny only dropped on Monday that police and private security companies at malls should actually have channels of communication and cooperation. They never had this before. “It was an eye-opener,” Mapisa-Nqakula said.

Ramaphosa has perhaps not been given enough credit for the upside of the underwhelming response by security forces to what some are viewing as an insurrection: police and soldiers have so far shown restraint with their use of live ammunition. Just two weeks ago the security forces in Eswatini were slammed for killing protesters and civilians after a similar looting and burning of shops there.

Supporters of former president Jacob Zuma have also hinted that there could be “another Marikana” if their protests were suppressed by force – a provocation the police were apparently briefed not to fall for.

Instead, Ramaphosa has embarked on an extensive consultation process, starting with business on Monday, ministers, civil society and religious leaders the next day, and finally opposition parties on Wednesday. This slow, methodical and low-key way of doing things is part of his style, for which he has both been praised and criticised in the past.

In the code of conduct for Operation Prosper – this deployment is under the same name as the nine-month deployment on the Cape Flats in 2019 – soldiers are told that they are there to assist the police. The firing of warning shots is prohibited and soldiers are also told to, “Exercise personal restraint and do not assault members of the public.”

In their meetings with the president, religious leaders have asked for, and appeared to have received some reprieve from the government on lockdown regulations that would allow gatherings to help calm tensions.

The Department of Cooperative Governance and Traditional Affairs on Wednesday issued an amendment to regulations, allowing: “Gatherings at community engagements, hosted by members of Parliament, members of provincial legislatures, councillors, leaders of political parties, religious leaders and traditional leaders to deal with emergency matters” for up to 50 people.

“The amendment will assist in engaging directly with communities affected by the current acts of criminality unfolding in some parts of the country, which includes looting, damage to property and infrastructure,” Minister Nkosazana Dlamini Zuma said in a statement.

“The situation of riots and looting is disrupting the much-needed delivery of services, including delays in treatment of patients. It is also delaying our vaccination roll-out programme, and threatening medical and food security.”

A number of ministers are expected to conduct “community outreach” programmes on Thursday in places affected by tensions, mostly in and around Gauteng, which has been affected to a lesser extent than KwaZulu-Natal.

Acting Minister in the Presidency Khumbudzo Ntshavheni said there had been 208 incidents overnight on Tuesday, but she was unable to give the final tally of arrests.

She was also tightlipped about the investigation around those suspected of instigating the looting.

“We want to caution the media and community not to release information regarding the investigation on who is behind the looting. We appeal for responsible reporting,” she said.

Some of those arrested during the looting in Gauteng have started appearing in courts. Phindi Mjonondwane, regional spokesperson for the Gauteng Local Division, said 135 people had appeared in different courts in the region.

These matters would be allocated to “experienced prosecutors that will be working closely with the South African Police Service to guide investigations into these unrest cases,” she said. DM