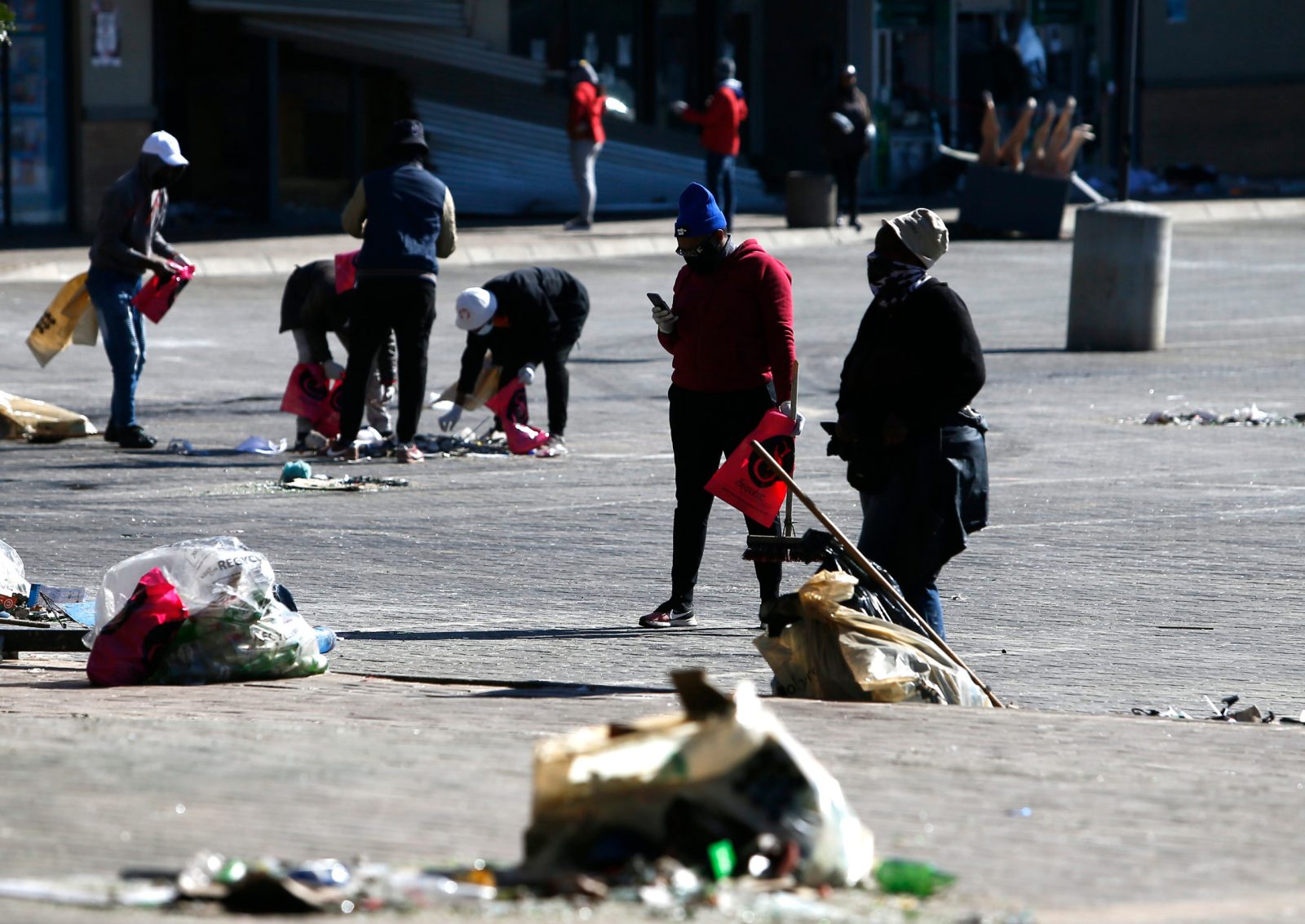 Soweto was relatively calm on Wednesday after days of looting and violence. As volunteers cleaned up their vandalised malls, residents surveyed the carnage and queued for bread.

Volunteers and mall staff swept trash and debris into neat piles at Diepkloof Square on Wednesday almost as if they were raking leaves in a garden. Outside the Nedbank branch, the legs of a mannequin hung out of an opened safe.

The insides of ATMs — Nedbank, Standard Bank, FNB — had been disembowelled. Every store had been ransacked, including well-known retailers like Pep, Pick n Pay Liquor, McDonald’s, Mr Price, Ackermans, Food Lover’s Market and Rage, and more obscure stores that left you guessing as to what was once on the shelves.

There was a bullet hole in a shattered window at Debonairs. Someone spray-painted “FUCK THEM ALL” on KFC’s glass door.

Fifteen meters from a camera crew there to survey the carnage, white powder was strewn across a small patch of the car park. The day before, relatives of someone who died during the looting had come to scrub their loved one’s blood from the bitumen; it was eventually covered in the white powder.

According to Lerato Motshoeneng, the local Community Policing Forum secretary, three people were killed during the violence and looting at Diepkloof Square over Monday and Tuesday.

Motshoeneng is one of the organisers of the local clean-up operation. When she got the call about the looting of the mall, it was too late. Only a few SAPS officers could respond and they were overwhelmed by the crowd on Monday. When JMPD backup arrived, the crowd dispersed, but it returned when the police left to respond to looting at another mall. Soldiers arrived on Tuesday morning and the area has since been calm.

“As the community, we must stand together and fix this mess,” said Motshoeneng as volunteers slowly cleaned the car park, leaving empty stores still accessible through their broken windows.

Godfrey Tshehlo, the SA National Civic Association chairperson in Zone 10, was also helping to coordinate volunteers. He said they had partnered with Pick n Pay, Food Lover’s Market and mall management to get the mall operational as soon as possible. That could be weeks or months away. In the interim, residents will have to travel to get basics like groceries and medication.

Tshehlo believes the attack on the mall was started by professional criminals who were then joined by locals trying their luck. He pointed to the destruction of the ATMs as proof that criminal syndicates were involved. A security guard who responded to the attacks said he helped arrest one suspect targeting an ATM who appeared to be an expert.

“The thing of looting, it’s not about Jacob Zuma. It’s about thieves,” said Sophie Motlhatlhedi, a resident helping clear the debris.

The streets around Ndofaya Mall in Meadowlands were quiet on Wednesday. A resident was trying to fix a pedestrian gate to the mall to prevent anyone from coming to take what was left, the copper and air conditioners. At least 10 people died while the mall was looted on Monday, reportedly during a stampede.

Vuyo Tishane, who runs the NPO Ground Movers, was coordinating clean-up efforts outside the mall, directly opposite the Meadowlands Police Station. The centre was flooded and strewn with trash, making it dangerous to enter, but Tishane pointed to different areas where he’d heard people had died due to stampedes and other calamities linked to the looting.

“FREE ZUMA” was spray-painted on a broken roller door half covering an entrance to the mall, but the men starting the clean-up believed the violence had little to do with the incarceration of former president Jacob Zuma. They said the looters came from other parts of Soweto, moving from one mall to another as they cleared stock.

He said he invested R1.2-million launching the fast-food restaurant eight months ago. Two months ago it was robbed at gunpoint. He didn’t know how he would pay his eight staff members. “We won’t open again because I think this thing will happen again,” he said.

Maponya Mall in Klipspruit seemed to be the last shopping centre left standing in Soweto. Community groups, SAPS, SANDF members and private security stood guard outside the large mall on Wednesday to thwart potential looters. There was even a refreshment station for those spending long hours on guard.

Nhanhla Lux, a member of the “Soweto Parliament” group and Operation Dudula, which has confronted drug dealers, but also been accused of xenophobia, which the group denies, said he hadn’t slept in four days while he and others have been protecting the mall. He said he faced gunfire on each of those days.

“As we speak, here in Soweto we have a big food crisis,” said Lux, wearing camouflage and carrying a sidearm.

“The reality right now is the malls are looted. People are struggling to get bread.”

Across the road from Maponya Mall, people queued to buy bread from Sasko trucks. While most malls were looted over the past few days in Soweto, many spaza shops closed during the violence and there have been shortages of fuel and supplies to healthcare facilities.

Anthony Nkongwa and Lizo Mashiqa, who came to defend Maponya Mall on Wednesday, stood in the queue for bread. “All I can say is it’s madness. People loot in the name of protecting a looter. Criminal elements have taken over, hijacked this,” said Nkongwa.

“No fuel, malls closed, we can’t get decent food,” said Mashiqa. He said Zuma’s arrest sparked the violence and some looters just wanted to join in on the excitement, but there were other “submerged raging fires” that contributed to the chaos, such as youth unemployment and the perception that foreigners are privileged in South Africa. DM