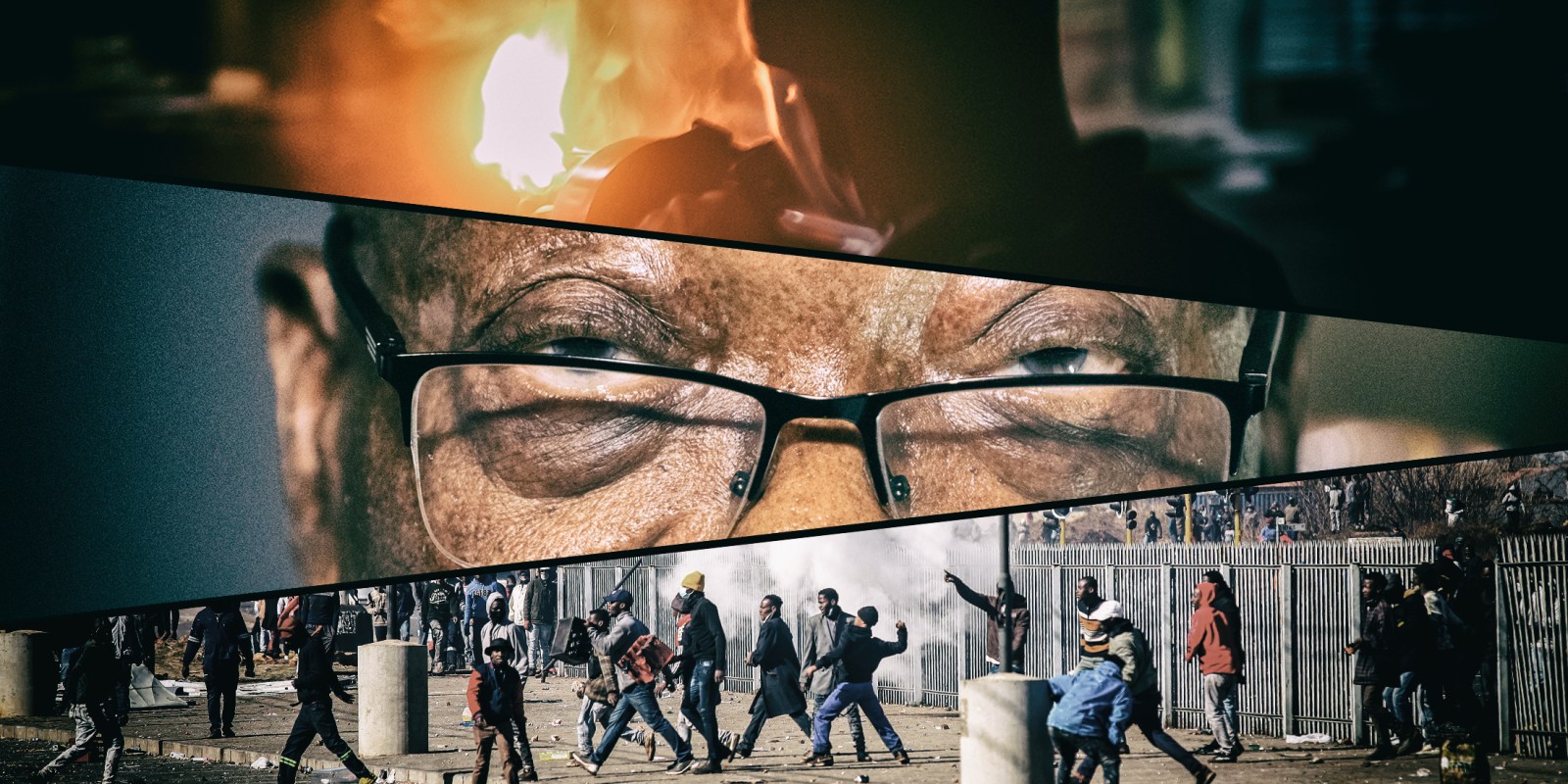 In failing to anticipate the riotous looting and act against the leaders, the intelligence community could be responsible for one of the most egregious failures imaginable. The people who are using taxpayers’ money to protect national security will have become the single biggest threat to national security. People are paying the price with their livelihoods and lives.

Jane Duncan is a professor in the Department of Journalism, Film and Television at the University of Johannesburg. She is author of Stopping the Spies: Constructing and Resisting the Surveillance State in South Africa.

As chaos unfolds on the streets of South Africa, analyses abound of what the drivers of the chaos are. Some point to criminality, others to a political assault on the government fuelled by inter-ANC rivalries. Still others emphasise unemployment and inequality as key drivers, likening the mobilisations to food riots.

By this stage, the mobilisations (I hesitate to call them protests) appear to contain all these elements. However, one analysis that has yet to come to the fore is that the mobilisations contain elements of a counter-intelligence operation against a sitting president.

Recognising the patterns of a classic counterintelligence playbook helps us to understand the ways in which the chaos is unfolding, identify the kinds of covert action being used, and anticipate the likely trajectories.

South Africa has a broad definition of counter-intelligence, which is measures taken by the security services to impede and neutralise the effectiveness of foreign or hostile intelligence operations and to counter any threat or potential threat to national security.

In this case, though, what is being threatened is the State Capture project aligned to former president Jacob Zuma, and the person doing the threatening is President Cyril Ramaphosa.

Triggered by Zuma’s imprisonment, the mobilisations appear to be part of a fight-back against attempts to rein in the State Capture project around the former president: a fight-back that has been termed State Recapture or State Capture 2.0.

While the mobilisations have taken on a life of their own, as they have tapped into South Africa’s most serious fault lines, the events that precipitated them were clearly highly organised and well thought out. In fact, they bear the hallmarks of a paramilitary force skilled in counterintelligence strategy and tactics.

In that regard, it is significant that at a Security Cluster briefing held earlier today, State Security Minister Ayanda Dlodlo conceded in response to a journalist’s question that they were investigating the possibility of former members of the State Security Agency being behind the mobilisations.

To the extent that this allegation is true (and this allegation still has to be proved), then in failing to anticipate these events and act against the leaders, the intelligence community could be responsible for one of the most egregious intelligence failures imaginable. The people who are using taxpayers’ money to protect national security will have become the single biggest threat to national security. People are paying the price with their livelihoods and lives.

Such a failure would be unsurprising, as time and again, South Africa’s security services have shown themselves to be at their weakest when they attempt to deal with inter-ANC factional battles. Then, they develop all kinds of blind spots. Organised attacks on public and private infrastructure have been going on for years. So have the intelligence and prosecutorial failures around them.

Clearly, the unfolding events are not sporadic; they are following a particular logic. The overall strategy appears to be to foment organised chaos to create conditions ripe for the establishment of a political movement that is primarily but not exclusively ethno-nationalist. Such a movement would suck support away from the ANC. Importantly, this strategy is not revolutionary in the classical sense: it is coming from the political right.

The first tactic to take this strategy forward is to organise chaos by attacking or strangling critical infrastructure. Already, the attacks on trucks and other transport routes are leading to a range of shortages.

These attacks have four effects. First, they weaken and even bring essential services to a halt in strategic areas, including the all-important vaccination programme against Covid-19. Second, they demoralise the public, which becomes increasingly desperate for any interventions it thinks will keep it safe and alleviate its suffering.

Astute political entrepreneurs can easily rise from the ashes of the organised chaos and mobilise a political movement cynically, using the major racial, ethnic and class faultlines in society.

Third, they create space for interventions by political actors who can make all kinds of promises to do just that. Fourth, they delegitimise the current president, creating the impression that he is weak, incompetent and past his sell-by date.

It has taken very little for these attacks to open the floodgates for people to vent their anger on the capitalist system, as South Africa is a tinderbox of social discontent at the moment. Businesses large and small have become targets.

Desperately hungry people have used the ensuing chaos to take food from shops. Others, clearly more well-to-do, have carried off everything from drum kits to flat-screen television sets. To that extent, these actions have included both elements of survivalist appropriation driven by worsening social conditions and criminal opportunism. It is not either-or.

The ill-advised deployment of the SANDF is likely to pour fuel on the fire of anger on the streets, particularly if it repeats its performance during the hard lockdown of killing and injuring civilians. Inadvertently, this may create “martyrs” for the Zuma cause and escalate rather than dampen the mobilisations.

The deployment of the SANDF may well stem the waves of attacks on shops, but at a huge social cost. Much depends on where the loyalties of the SANDF generals lie. Militaries can be wildcards in situations of great social instability. In full-blown insurrections, they may decide to side with the insurrectionists and not their political masters.

The deployment of the SANDF may also fuel even more underground attacks on critical infrastructure: something they are ill suited to deal with anyway, as doing this requires a domestic intelligence intervention.

However, it is unlikely that the forces that appear to be behind the organised chaos will be able to sustain a paramilitary intervention for long. Rather, they may well look to the political terrain to further the State Recapture project.

History has shown that counter-revolutionary movements are born in such moments of political ferment, especially when progressive political movements and leadership are weak.

Largely, South Africa has escaped the ill winds of authoritarian nationalist populism that swept political movements to power in other parts of the world. But there is nothing written in the stars to say that these ill winds will not make landfall here.

Astute political entrepreneurs can easily rise from the ashes of the organised chaos and mobilise a political movement cynically, using the major racial, ethnic and class faultlines in society.

A pure Zulu nationalist project is unlikely to gain political ground beyond KwaZulu-Natal, though, but a project that mobilises against “foreigners” and other scapegoats of the now widespread social misery could. After all, this is how Brazil’s Jair Bolsonaro and India’s Narendra Modi came to power. Such a movement would be a disaster for South Africa, but undoubtedly the political space is there.

South Africa is indeed at a tipping point. Years of austerity and political failures to deal with the most pressing challenges are catching up with us. But all is not lost.

It is difficult to believe that the instigators of this organised chaos are not known. They must be arrested immediately, which will cut the head off the mobilisations. Things are likely to de-escalate from there, although the terrible social conditions that they exploited will remain. Deploying more police and the SANDF is reactive and not getting to the root of the problem.

But that will only buy the ruling political elite time until the next counter-intelligence operation. The ANC is tearing itself and the country apart. It must deal with its internal wars or it risks being unseated by a far more sinister and dangerous political force. And if that happens, then it will have only itself to blame. DM