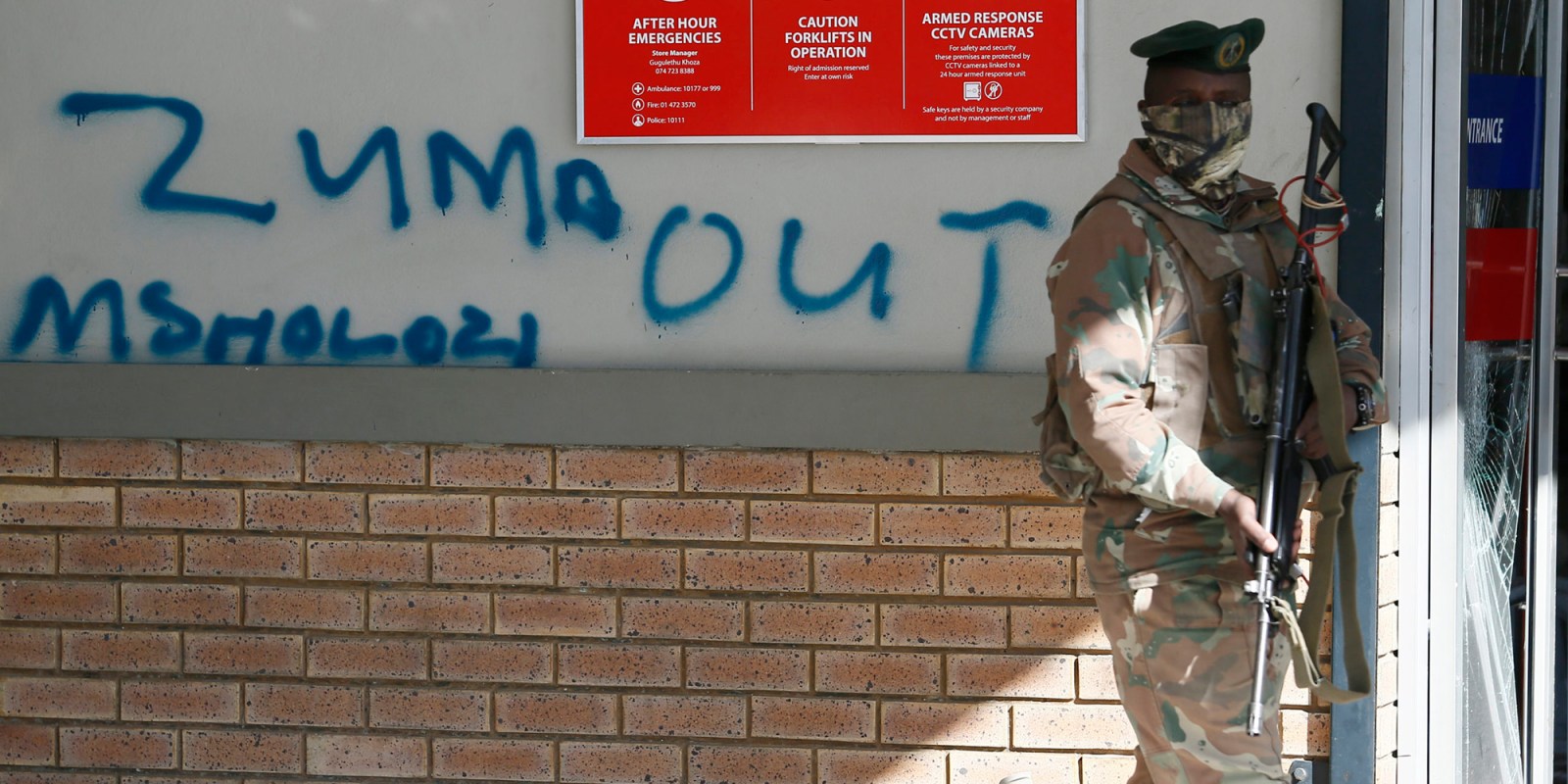 A SANDF soldier helps police keep the peace on Tuesday, 13 July 2021 after looters cleaned up the at Diepkloof Mall in Soweto . (Photo: Felix Dlangamandla / Daily Maverick)

Veteran KwaZulu-Natal interventionist human rights worker, Mary de Haas, has described the violence and criminality that has gripped the province for four days as a manifestation of the ‘ANC imploding’.

De Haas attributed the failure of authorities in the region to prevent the violence and looting which broke out after former president Jacob Zuma’s arrest on 8 July to “a political policy decision”.

“They left it too late,” she lamented.

De Haas’s observation appears to be borne out by a statement made by Minister of State Security Ayanda Dlodlo on Tuesday, that the State Security Agency had received eight alerts on 28 June on planned public violence.

De Haas told Daily Maverick she was under no illusion that the violence in the province which later spread, predictably, to Gauteng “is orchestrated”.

“There is enough on record of people inciting violence and threatening it for us to take this seriously. What instigators are doing is going in and getting the ball rolling and then leaving it up to criminals and others to loot”.

While President Cyril Ramaphosa might enjoy support countrywide, ANC members in KZN, who had benefited handsomely from Zuma’s presidency and locality, viewed the former president as a “figurehead”.

eThekwini, the largest ANC region in the country, had always been “solidly Zuma” while the former president himself had been the ANC’s “frontman” in the province for decades.

Zandile Gumede, who rose from the shacklands of Inanda to mayor of eThekwini before her ousting on charges of corruption, was part of the strong grouping that supported Zuma.

From 2016 onwards, said De Haas, anyone wanting to get on to ANC’s party lists “had to be in the Zuma camp”. Fortunes had been made by many in the province who have not been shy to flaunt their wealth. These individuals include Shauwn and S’bu Mpisane who made their fortunes building low-cost housing.

Also close to Zuma are family members of the Gcaba taxi dynasty who this week rushed to distance themselves from the violence, rejecting accusations that it was “in any way involved in current acts of violence happening in the country”.

The removal of Jacob Zuma from the political equation was and is a direct threat to those in the party and the region who are politically aligned to him and who have amassed vast fortunes in tenders, said De Haas.

“It is all about economics and tenders,” she said, as well as a shadowy group “blatantly whipping up support”.

“The strategy is to whip people up, go in and start the process, be it a mall or a shopping centre, and withdraw when the looting begins.”

Looting, she added, was a regular occurrence in the area and when the opportunity presented itself, hungry citizens bearing the brunt of a pandemic, a lockdown and an economic meltdown, took advantage.

In many areas in KZN, eyewitnesses reported children walking to malls and centres where looting was taking place to join in.

De Haas said she had witnessed in the lead-up to the unrest people agitating shackland residents on Sunday night.

“On Monday around 10 o’clock the shooting started just off Ridge Road. By then I had been informed that malls were burning all over, including Umlazi.”

The agitators, she said, “have a captive audience of resentful, poor people and you realise how desperate they are. This is what the lockdown has done,” said De Haas.

She praised local provincial commissioner Lieutenant-General Nhlanhla Mkhwanazi as a professional and well trained law-enforcement official, but said he was still subject to “political instruction” by Minister of Police Bheki Cele, who has his own chequered history in the province.

She said she was “really worried” that the violence would spread and would morph into racial violence as white residents of the province felt abandoned and threatened and took up arms. DM