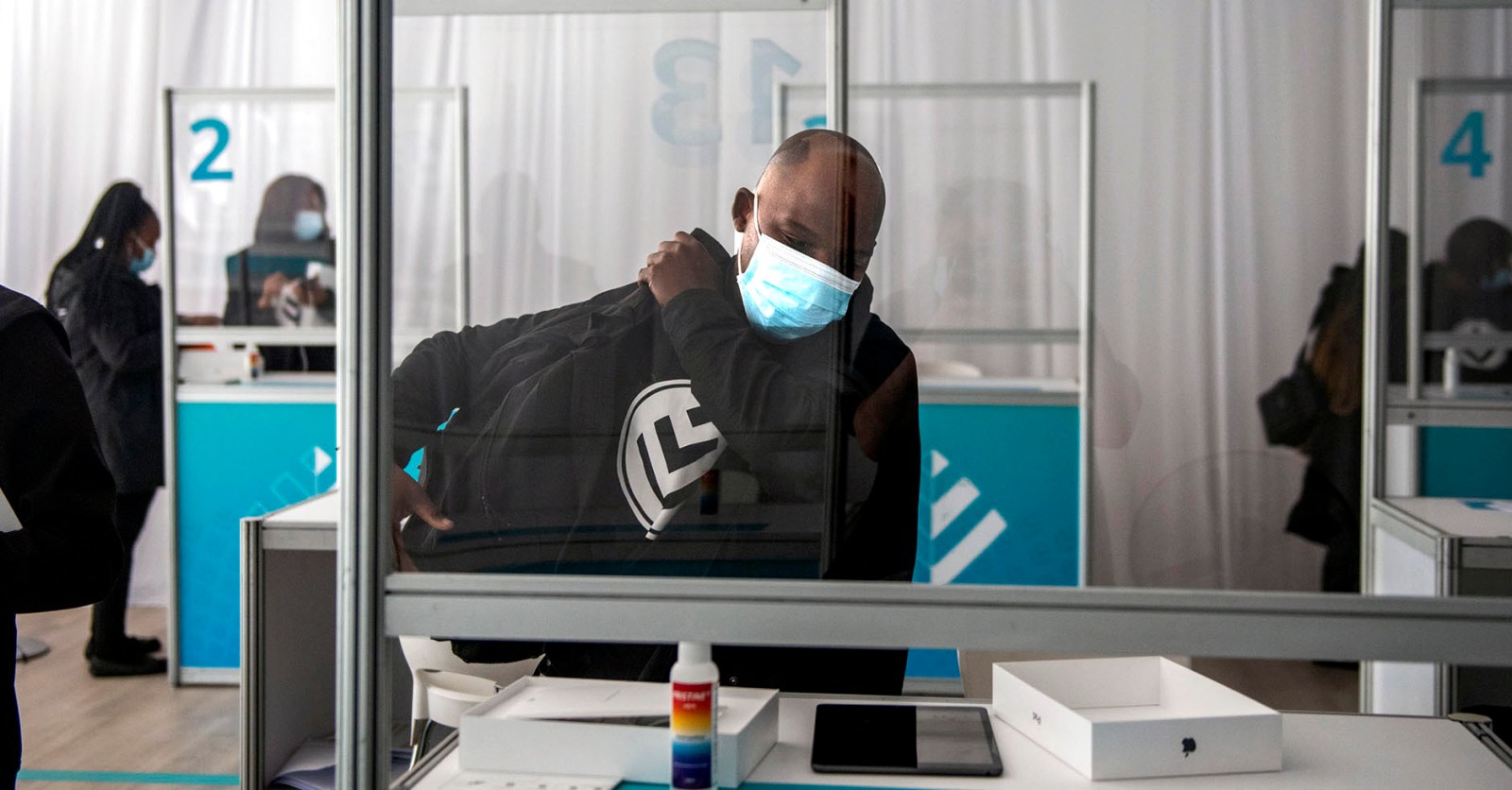 Gauteng’s vaccine roll-out programme is another casualty of the mayhem that has gripped parts of the country and plunged the province’s broken healthcare systems into a deeper crisis.

The fallout of two days of looting, violence and unrest has not unexpectedly derailed the momentum of Gauteng’s vaccine programme and impacted healthcare services and medical supply chains.

Vaccination numbers in the country had reached 191,833 a day on Thursday last week. The number dropped to 146,577 this Monday after the unrest that first exploded in KwaZulu-Natal spread to Gauteng on Sunday.

In Gauteng there are 61 active public and private vaccination sites in the province. The Department of Health and Business for South Africa (B4SA) confirmed on Tuesday that they would be adopting a “precautionary principle” to temporarily close vaccination sites that were “damaged or that may be at risk” following the havoc caused by looters and vandals.

People who have appointments for vaccinations at affected sites in the coming days, have been told to hold off and to wait for notification of a rescheduled appointment date that will be automatically generated by the EVDS (Electronic Vaccination Data System).

According to Vuyo Sabani, spokesperson for the Gauteng department of Health, “most public vaccination sites are operational but numbers of people coming in are low, as can be expected”.

Sabani said in Sedibeng district sites are open for vaccinations except for one site in Ratanda in Heidelberg, “due to blockaded roads”.

In Ekurhuleni district, two vaccination sites are not operational, these being in Thokoza and Vosloorus.

In Tshwane, all sites are open for vaccinations as are the sites in the West Rand.

Sabani advised the public to call the Gauteng hotlines (0800 22 8827 and 0800 42 88364) to confirm operating hours at affected sites before arriving for their vaccination appointments.

Private sector sites have also been affected. Discovery’s four vaccination sites in Gauteng were closed on Tuesday and will remain closed Wednesday. Discovery’s senior reputation manager Nthabiseng Chapeshamano said between Cape Town and Gauteng the company had expected to administer 9,500 vaccinations a day, amounting to 50,000 vaccinations this week. Vaccinations in Cape Town continue.

“Approximately 14,000 people will have to reschedule for vaccination this week as a result of the closure of Discovery vaccination sites on 13 and 14 July. We hope to resume vaccinations as soon as we can assure safety for our employees and attendees to the sites.”

The chaos and havoc has also resulted in highways and road closures throughout the province. The raised threats of hijackings and ambushing have added more logistical challenges for the safe delivery of vaccines to various sites. This even as vaccines are delivered under security protocols.

Added to this pressure, health sector employees, vaccinators and healthcare workers have been unable to find safe transport to report for work with transport disruptions which include limited taxi services and Rea Vaya buses not running.

Beyond vaccinations, healthcare services and medicine supplies have also been interrupted. The DoH confirmed that several pharmacies and medical centres were looted and had stock stolen. In Alexandra, the Right ePharmacy medicine dispensing ATM at the Alexandra Plaza didn’t escape vandalism and looting. The facility has been closed indefinitely, closing an essential service delivery channel for TB, HIV and diabetes patients who collected their chronic medications from the electronic dispensary.

Both Dis-Chem and Clicks pharmacies on Tuesday announced temporary closures of all stores in KZN and some of their Gauteng stores.

Afrox, a key supplier of medical gases including medical oxygen, critical in the fight against Covid-19 in hospitals and for patients fighting the virus at home, confirmed that medical gas supplies had been affected in Gauteng and KwaZulu Natal. Communications manager Nolundi Rawana said the company had started “emergency planning” to find alternate routes to get their delivery trucks safely to hospitals in the two affected provinces. Trucks and truck drivers were among the first casualties of the violence at the Mooi River toll plaza. The weekend rampage saw 26 trucks torched, looted and destroyed.

“We have temporarily moved some of our staff and assets from ‘hot-spot’ areas to ensure our staff’s safety,” said company spokesperson Russel Meiring, adding there had been additional strain with staff unable to commute to work and they had implemented contingencies to ensure the continued supply of medical stock and oxygen.

Growing anxiety and fear arising from the chaos in the country and concerns that it will continue has pushed South Africans into deeper despair. Dr Imtiaz Sooliman of Gift of the Givers said angst and fury have also become a new terrible reality. Sooliman added: “It’s very hectic at the moment; very caught up with community anxiety.”

On Tuesday, Gift of the Givers had to confirm via social media that a warehouse that was looted was no longer in use by the organisation since earlier this year, and urged their Twitter followers to “stay indoors and keep safe”.

It will take massive recommitment to bring the vaccination programme back on track in the coming weeks. Martin Kingston of B4SA said the private sector continues to throw its weight behind the campaign. But he acknowledged the devastating blow made manifest by the civil unrest.

“We were making very good progress with the vaccine roll-out till just some 36 hours ago and we were as committed as ever to accelerate our programme to reach the 250,000 to 300,000 daily target of vaccine administered. We as business condemn the wanton violence and criminality that has set us back significantly.”

Kingston said B4SA continues to meet with government’s economic and security clusters to “deal with the ramifications for the business and healthcare sectors”. He said key areas of concern are now to ensure an uninterrupted supply chain and the safe transportation of medical supplies, including Covid-19 vaccines.

He added that licensing approval to add more vaccine sites would continue to bring more sites on stream in the coming weeks.

“Government does need to demonstrate that it can curtail, control and address these issues on the ground even as it has made clear that the capacity of the state has been challenged,” he said.  DM