Blitzboks forced into quarantine after arrival in Tokyo for Olympics 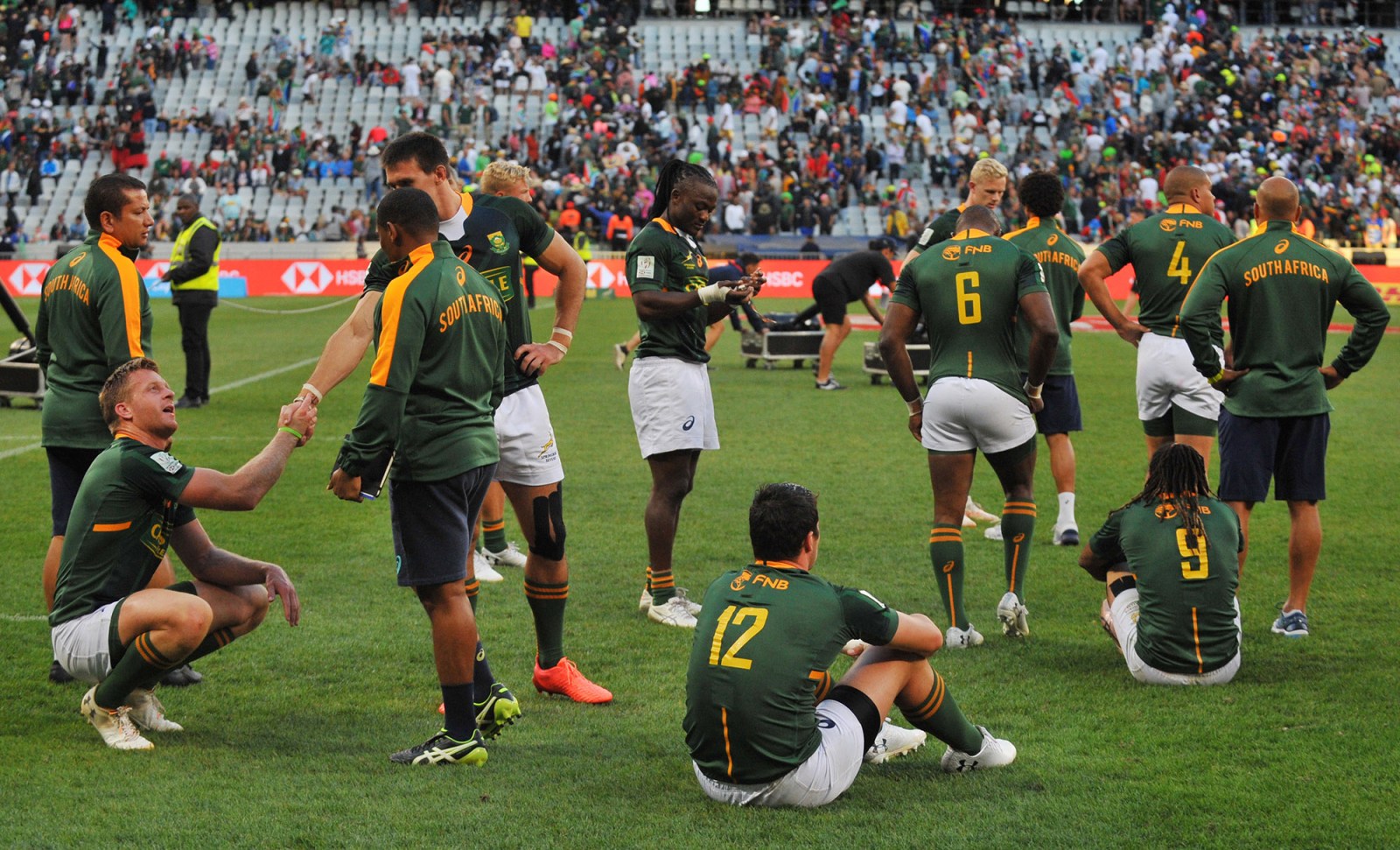 Dejected Blitzbokke after losing to New Zealand during day 3 of the 2019 HSBC Cape Town Sevens at Cape Town Stadium on December 15, 2019 in Cape Town, South Africa. Team SA’s Olympic mission faces an early challenge as the squad was quarantined upon arrival n Tokyo, owing to a Covid-19 scare. (Photo by Ziyaad Douglas/Gallo Images)

A warning of the potential pitfalls facing athletes and officials at the Tokyo 2020 Olympics was sounded when the South African men’s sevens team were forced into quarantine shortly after landing in Japan.

Team SA’s Olympic adventure started on a sour note in the early hours of Wednesday morning (SA time) with the news that the Blitzboks, definite gold medal contenders in sevens rugby, had to quarantine.

The squad, who won’t use the “Blitzboks” moniker at the Olympics, went into quarantine after landing in Tokyo following a Covid-19 positive case onboard their flight. None of the South African delegation returned a positive test, but a passenger not linked to the squad produced a positive return which has led to a knock-on effect.

A total of 18 Team SA members — 14 players plus four from management — have been put in a quarantine facility about 30 minutes from the Olympic village in Tokyo.

The squad are confined to their rooms for now but the team is hopeful that they will be allowed out to begin training within a few days. But it’s a frustrating setback that will cost the team valuable preparation time, especially if they are required to stay confined for the maximum 14 days.

With the Olympic sevens tournament starting on 26 July, there is an outside possibility the South African team could be scratched from competing.

“It’s an unfortunate situation, but there is no real cause for alarm,” said Patience Shikwambana, the Chef De Mission for Team SA at the Tokyo 2020 Olympics.

“We were notified that a passenger aboard the flight tested positive for Covid-19 on arrival in Tokyo. As a compulsory precaution, 18 members have now been put into quarantine.

“We are confident that a thorough assessment of the circumstances using the appropriate clinical and operational filters, will bring clarity and ultimately resolve the matter. We remain committed to a safe and fair Games for all participants.

“We will have more details tomorrow. At this stage, it is an unfortunate chain of events that despite exercising the strictest precautions and discipline during these pre-Games the Sevens team have been affected in this way.”

Team SA’s men Sevens have been drawn in a qualifying group that includes the USA, Kenya and Ireland, with the competition starting on July 26th.

It will be a setback for their preparations because coach Neil Powell is meticulous in his planning.

“I’ve been in the Sevens mix since 2007,” Powell told Daily Maverick in a recent interview. “I first served as a player and captain, and took the head coaching reins in 2013.

“The past eight weeks have been my best in the system. The work ethic from the guys has been incredible, and I’m optimistic about what we can achieve in Tokyo.

“It’s hard to say where we are at the moment. We’re used to competing in the World Rugby Sevens Series, where big teams such as New Zealand, Fiji and the US put us under pressure on a weekly basis.

“It’s been good to get some playing opportunities [against African national teams and academy sides in tournaments staged in South Africa] but we are under no illusions. It’s going to be a big step up in Tokyo.”

That step-up has just become a little higher.

“We are in a good space, despite the upheavals we encountered once we arrived,” said Powell.

“We have made a commitment to each other when we started this campaign that we will be mentally strong as well and that was tested with this episode. Adaptability – both mental and physical – will be key at this Olympics and we already felt that when we arrived.

“We took a knock, but I can say the players took in their stride. We can only control the controllable, so we remain positive. We will still have a training session while we wait for clearance, the only difference is it will be via Zoom call with the players in their rooms.”

World Rugby said: “We are in contact with Tokyo 2020, the relevant Japanese authorities and the South African National Olympic Committee and are working to provide support and assistance to the South African rugby sevens delegation, all of whom tested negative on arrival.”

The team will be tested again on Thursday, after which a decision on their travel plans will be made. DM

This article was updated at 6pm to include comments from  Neil Powell.