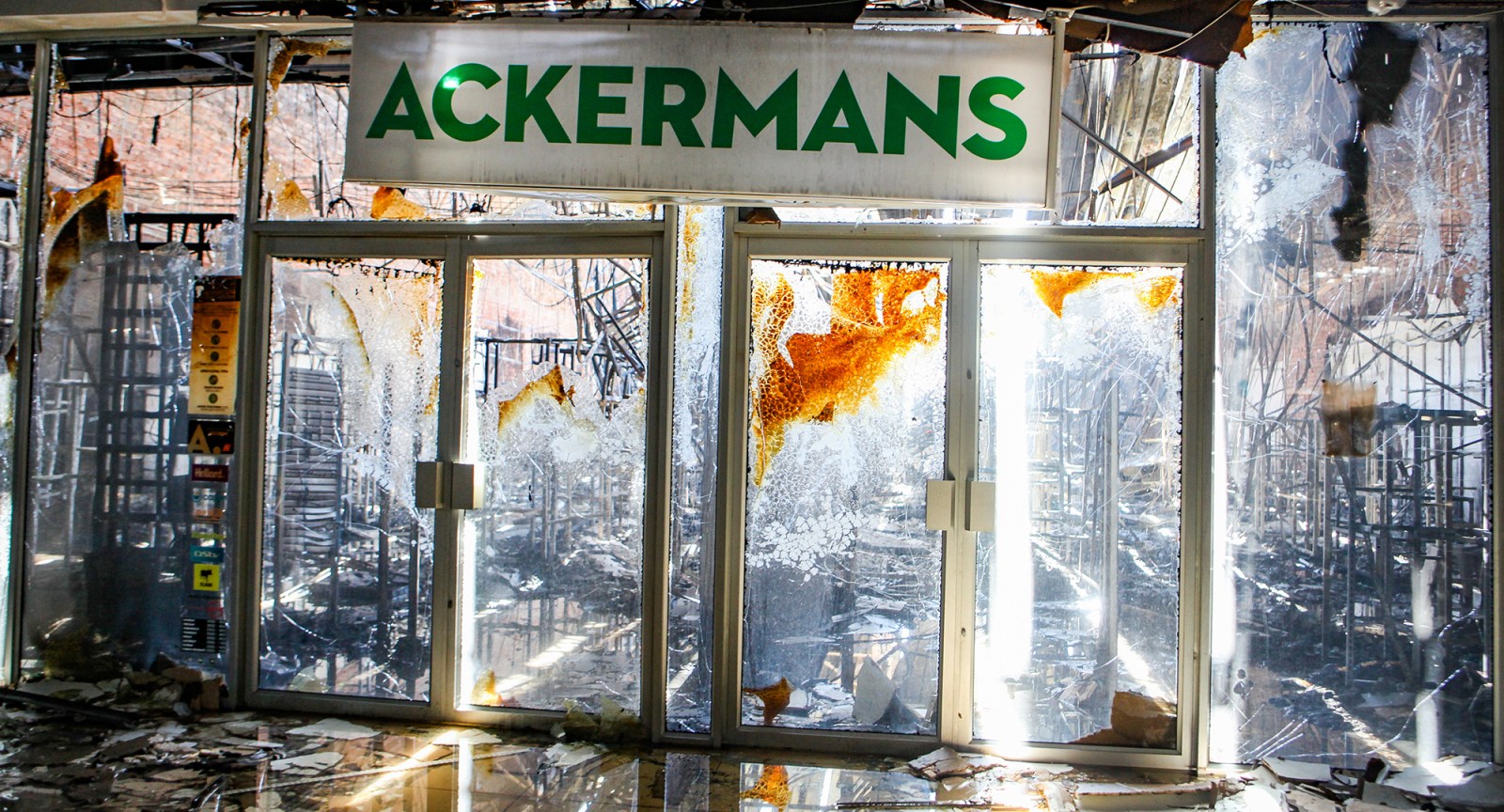 The aftermath of looting and arson at Chris Hani Mall in Vosloorus, Gauteng on 13 July 2021. (Photo: Gallo Images / Sharon Seretlo)

Sasria is the only insurer in South Africa that provides cover for loss or damage to insured property as a direct result of social unrest, including rioting, strike action and public disorder. Sasria believes it has more than sufficient cash reserves to honour insurance claims from businesses.

The SA Special Risks Insurance Association (Sasria), South Africa’s only short-term insurer that offers cover against damages and losses arising from riots, expects claims linked to the street violence and looting across the country to run into “billions of rands”.

This is a preliminary estimate, said Cedric Masondo, the MD of state-owned Sasria as its assessment of how many insured businesses have been destroyed is ongoing and might be concluded by the end of the week.

“The damage to businesses is big. The damage might run into billions of rands. That’s the reality we are facing,” Masondo told Business Maverick.

The direct cost of damages or losses incurred by businesses will be easy to determine as time passes. But the indirect cost — for instance, businesses that will not open their doors again or those that won’t be able to generate an income as restart efforts begin — will be hard to audit. The indirect cost will have a chilling effect on joblessness, future investments and the broader economy.

Sasria is the only insurer in South Africa that provides cover for loss or damage to insured property as a direct result of social unrest, including rioting, strike action, and public disorder. Insurance companies don’t provide cover against such risks, but offer limited insurance for incidents including accidental damages, theft (not arising from riots) and weather-related damages. In practice, business owners would take up normal insurance from short-term insurers, but supplement it with cover from Sasria — effectively signing up for cover with two insurance providers.

The Sasria cover is bought through insurance companies, which administer/manage the cover. When a business incurs a loss or damage as a result of civil unrest, insurance companies will act as mediators and hand over the claim to Sasria. Depending on the Sasria cover, businesses can receive a payout of between R500-million and R1.5-billion. No excess payments are required for Sasria claims.

Business owners who have Sasria cover and had their premises, equipment, vehicles and/or merchandise destroyed or looted as a direct result of the violent riots, can claim from Sasria, said Masondo.

“We won’t go to court or spend money on lawyers to decide if your claim is valid or not. We are not going to define what a ‘riot’ means and reject claims if it falls outside of the riot definition. From our point of view, these are all Sasria-related claims and payments can be made within a week.”

Other short-term insurers won’t pay for claims if businesses don’t have Sasria cover included in their policies, said Masondo.

Although some business owners have Sasria cover, the damages to their operations might cost more than the insurer is willing to pay. For example, a standard Sasria insurance policy pays up to R500-million. If a business owner had the standard Sasria policy (with a maximum payout of R500-million) and incurred damages or losses worth R3-billion, Sasria would not pay the outstanding R2.5-billion.

Shopping malls, many of which have been trashed by looters in Gauteng and KZN, are capital intensive and would require a lot of money to fix damages. Estienne de Klerk, the South Africa CEO of Growthpoint Properties, which has reported damages to its City Mall in KZN, said some real estate companies have limited insurance with Sasria, which might force them to pay out of pocket to fix damages.

“Generally, that insurance cover is not designed for a province-wide event such as the one we are seeing with the violent riots,” De Klerk said.

Another concern is whether Sasria will have enough cash reserves to process the sheer number of claims it might receive over the next few days. Unlike other state-owned entities, Sasria is profitable (it recorded a profit after tax of R333-million in 2020) and is self-funded (it relies on its balance sheet and not taxpayer-funded bailouts for survival).

Masondo said Sasria has more than sufficient cash reserves — accumulated from premiums collected in previous years and income generated from its investments — to honour claims.

For the 12 months to 31 March 2020, Sasria had cash on hand amounting to R4.25-billion, which has since reduced to R2-billion as the company has to fund its operations. Sasria also had investments worth R8.5-billion (valuation as of 31 March 2020) in listed shares, money market instruments and bonds.

Sasria’s board is not yet prepared to liquidate some of its investments to free up cash to fund insurance claims.  “Liquidating some of our investments would depend on how long this looting situation lasts and the number of claims we receive. Our view is that at this stage, we have enough cash in our balance sheet to settle claims.” DM/BM