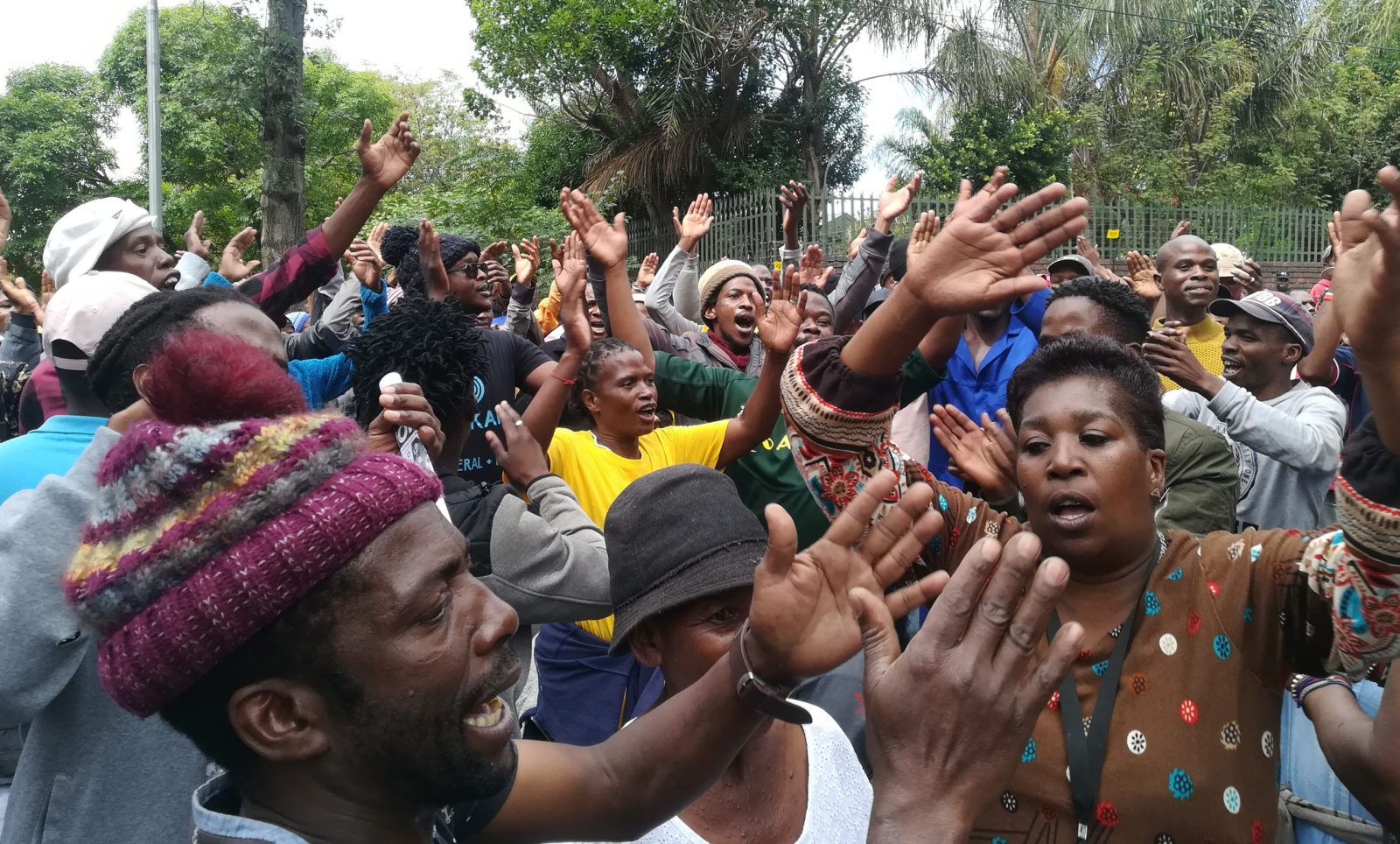 Protests by Alexandra residents in April 2019 led to the establishment of a commission of inquiry. (Archive photo: Zoë Postman)

As protests return to Alexandra, activists say nothing has changed since the 2019 unrest in the township.

As Alexandra is seized by mass looting and protests this week, a report from the Public Protector and the South African Human Rights Commission (SAHRC) following the devastating 2019 protests has revealed persistent failures by the City of Johannesburg and the Gauteng Provincial government.

While the recent protests are reportedly linked to the incarceration of former president Jacob Zuma, the joint report suggests that Alexandra’s community is a tinderbox for public unrest.

“These cramped and overcrowded conditions, combined with a lack of planning and infrastructure development as the township grew, and high rates of unemployment and limited access to socio-economic rights make Alexandra a ticking time bomb in terms of service delivery problems,” said Jonas Sibanyoni, Commissioner at the SAHRC, at the launch of the report on Friday. Alexandra is among the most densely populated areas in South Africa, with about 750,000 people living on approximately 800 hectares.

Two years ago the Alexandra Inquiry was launched after protests that rocked the township in April 2019. The inquiry heard submissions from residents, government officials, and others about overcrowding, under-policing, and a lack of water and sanitation services in the community. The inquiry also looked at allegations of corruption in the Alexandra Renewal Project (ARP) — a project initially worth R1.3-billion, launched in 2001.

Public Protector Busisiwe Mkhwebane said that Alexandra residents blamed the lack of adequate housing for many socio-economic challenges in the area, such as overcrowding, the “mushrooming of illegal structures on every open piece of land, demolitions, illegal evictions and congestion”.

The report made several findings against organs of state. The City of Johannesburg was found to have “not provided sufficient municipal services to the community of Alexandra.” Key shortcomings include inadequate housing, potholes, refuse collection, raw sewage in the Jukskei River, and sanitation services.

The Gauteng Department of Human Settlements and the City were also found to have not met their obligations in terms of the Constitution, and though “significant strides have been made for the provision of housing”, their conduct “constitutes improper conduct…and maladministration.”

The South African Police Service and the Johannesburg Metro Police Department were likewise rebuked, with the report finding that they had not done enough to address inadequacies in law enforcement in Alexandra. Despite a decline in crimes such as murder, rape and assault, “crimes against property as well as enforcement of by-laws within Alexandra remains prevalent.”

The Gauteng Department of Social Development was also chastened with findings of improper conduct and maladministration. In 2019, it was revealed that residents of Alexandra had to travel 21 kilometres to social services offices. The report found that the department had “failed to implement an adequate social relief of distress programme and a Social Welfare Centre(s)or social infrastructure within Alexandra for vulnerable people who are in need of social services.” However, “some of the adverse findings in the interim report are to an extent mitigated” by the department’s latest plan.

The Gauteng education department escaped censure, with the inquiry finding that “schooling infrastructure or facilities in Alexandra are reasonably in place.”

The SAHRC and the Public Protector could not make findings regarding the allegations of maladministration of the Alexandra Renewal Project, as there was an ongoing forensic investigation into the project.

At the initial hearing, GroundUp reported that the Auditor General’s investigation into the project had been thwarted by poor record-keeping, including a lack of financial records, procurement and business plans, as well as maps, contracts and lists of service providers contracted for the project.

The Public Protector recommended that Premier of Gauteng, David Makhura ask President Cyril Ramaphosa to launch an investigation through the Special Investigating Units into corruption, fraud and the possibility of recovering public funds.

At the Friday release, Mkhwebane acknowledged that the City of Johannesburg had taken “significant steps” to improve service delivery in Alexandra since receiving the inquiry’s preliminary report.

But these improvements weren’t so clear to Thabo Lerato Mopasi, an Alexandra resident, and an activist with the Alexandra Peace Ambassadors. Mopasi said, “There is sewage and litter in the streets, people erect structures wherever they wish, even in front of people’s gates. There are high levels of crime and so many of our residents are unemployed,” he said. “There has been little evidence of improvement in service delivery. We don’t know what the successes of the Alexandra Renewal Project are because little has changed. We can only hope that state organs take this report seriously and do what they are supposed to do in Alexandra.”

Buang Jones, Gauteng manager of the SAHRC, said that as part of their monitoring mandate, the Commission would visit Alexandra again to discuss the contents of the report, once lockdown restrictions permitted gatherings.

Feziwe Ndwayana, spokesperson for the Gauteng Department of Social Development, said an office still had to be established in Alexandra. Ndwayana said the only bidder to respond to a tender for the offices had not met all the requirements and the tender would be re-advertised.

Questions from GroundUp to the City had not been answered at the time of publication. DM