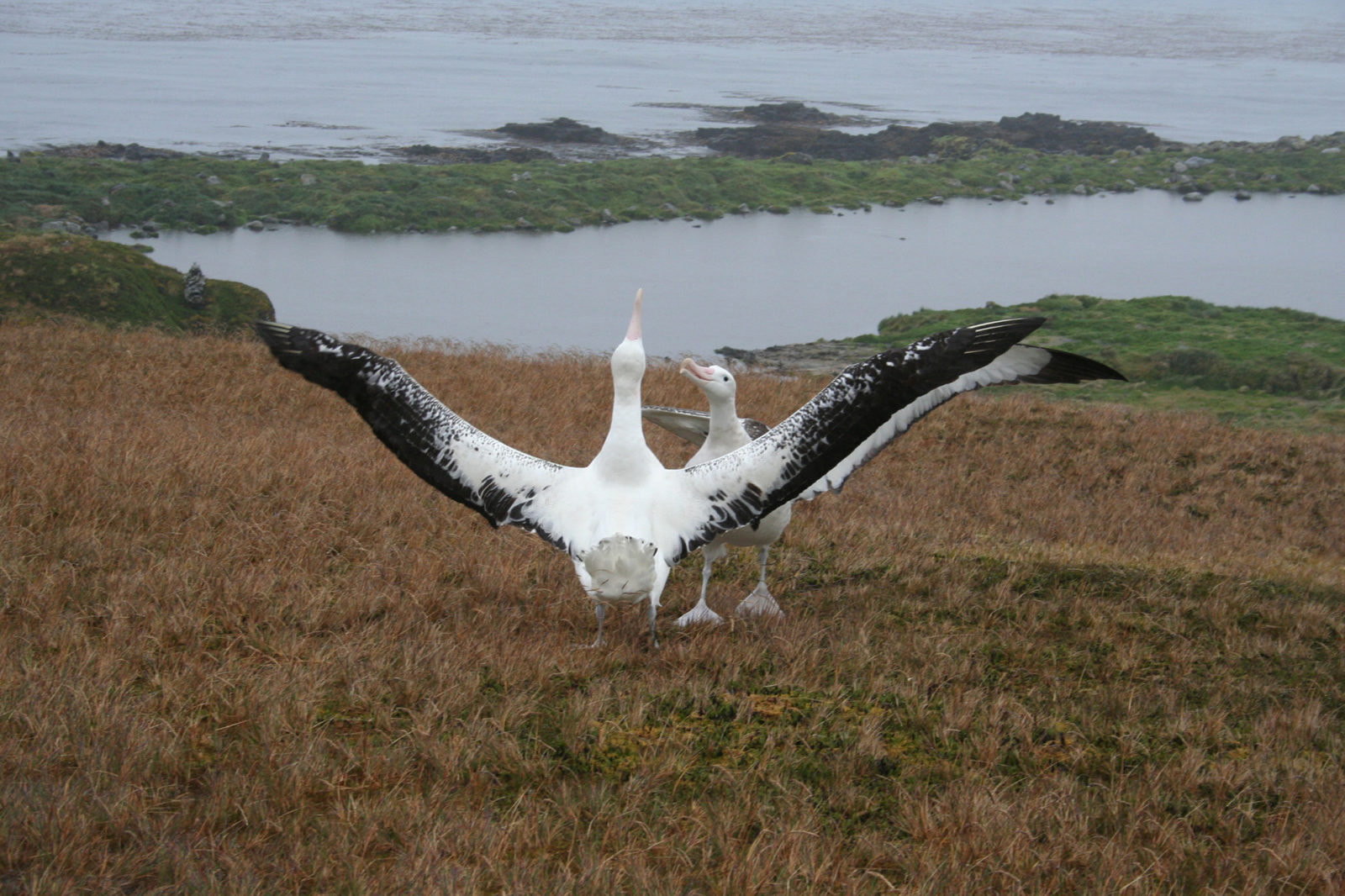 Seabirds such as these wandering albatrosses have evolved on remote islands free of mammal predators. They nest in the open and have not evolved defence systems to deal with predation by mice or rats, for example. (Image: Tony Carnie)

A major operation is under way to eradicate alien mice that are killing the chicks of threatened seabirds on Gough Island, a remote island in the South Atlantic Ocean – by slowly and painfully eating them alive.

Gough Island is one of the best spots in the world to bring up a family if you are one of the many seabirds that have evolved to feed and breed around this remote chunk of volcanic rock, roughly halfway between South Africa and South America.

Sure, it’s cold and windy, and rains on average for about 225 days of the year – just ask the handful of local meteorologists who have been posted to this tiny island in the South Atlantic Ocean to monitor weather conditions for the South African Weather Service (Saws) since 1956.

For thousands of years, seabirds such as albatrosses, petrels, penguins, prions and shearwaters have found it an ideal place to raise their offspring in a relatively safe environment, free of mammalian predators.

But over recent decades Gough has been infested by a growing plague of tiny predators that were brought here accidentally by people more than a century ago – and now they are eating the island birds alive.

Two years ago, it was confirmed that not only were the mice eating the defenceless chicks, but they were also starting to attack and kill large adult seabirds with wingspans exceeding 3m.

Equally disturbing is the recent discovery that some of the mice on Gough are now much bigger than their ancestors because of their carnivorous diet of large seabirds.

Writing in the Journal of Mammalogy, a team of researchers from the RSPB and FitzPatrick Institute of African Ornithology in Cape Town reported that mice on Gough have a body mass 50 to 60% larger than mice on other islands.

“We consider that this predatory behaviour and the abundance of albatross and petrel chicks in the winter period [have] provided a unique set of circumstances that has freed the mice on Gough from normal ecological constraints that limit body size – with devastating consequences for the island’s seabird populations.”

This is why the RSPB has deployed a large team of helicopter-borne mouse eradicators and support staff to the island to drop poisoned bait pellets across the island in the hope of eliminating the alien mice and protecting vulnerable seabirds.

The RSPB has not responded to written queries from DM168 about the progress of the operation that began in June, suggesting that the large number of people currently on Gough Island had made communications “very difficult”.

Nevertheless, a social media post by the RSPB-funded Gough Island Restoration Programme on 24 June reported the following: “The first island-wide distribution of bait has been completed! This is an important milestone for the project, but we still have a long way to go, now fingers firmly crossed for good weather windows for the second application.”

A report by RSPB staff members Antje Steinfurth and Sophie Thomas on www.tristandc.com confirms that the mouse eradication team arrived at the island on 3 June aboard the South African polar supply and research ship SA Agulhas II as part of the £9-million RSPB-organised Gough Island Restoration Programme.

“The vessel carried four helicopters that were deployed to transfer the incoming team, equipment and supplies ashore. This included specialist bait produced in New Zealand that will be distributed by helicopter across all of the island’s surface to attract and eliminate invasive house mice that have caused havoc to the native fauna by predating on breeding [seabirds] and land birds and their eggs.”

Somewhat surprisingly, neither chicks nor nesting adults appear to be able to repel the mice using their beaks – with gruesome video recordings showing that mice often attack the birds from the rear and tear away tiny chunks of flesh over several days.

In other cases, chicks have been “scalped” after mice clambered up their backs and necks to eat away large parts of their heads.

Ross Wanless and other bird researchers who deployed infrared cameras to film some of the night-time attacks reported that: “Video evidence shows up to 10 mice attacking a chick, eating from three open wounds… No chicks displayed appropriate behavioural responses to attacks, even though mice had eaten through the body wall of one filmed albatross chick and were consuming the contents of the chick’s abdominal cavity.”

Many nesting adults also appear determined to guard their eggs and chicks at whatever cost, rather than fleeing from mouse attacks.

From a broader ecological perspective, researchers are worried that the scale of killings at Gough now threatens the future of some of the more vulnerable seabird species at this Unesco World Heritage Site.

Just 65km² in size, the island is uninhabited save for the Saws weather station. But it is also home to 22 breeding seabird species, including many that are globally threatened, such as the Tristan albatross and MacGillivray’s prion.

Earlier this year, Gough Island Restoration Programme executive Andrew Callender voiced concern that these prions were on a trajectory towards local extinction if mouse predation was left unchecked.

“Of the 50 chicks we monitored [at one of the breeding sites], 33 were alive on 24 January. Just a week later, 30 more chicks were dead, with carcasses still strewn on the nests. Of the three remaining chicks, one was being attacked by mice. And now … we have heard that these last three chicks have all died from mouse attacks. Another year of total failure,” he lamented in an editorial.

Scientists estimate that there were well over three million MacGillivray’s prions on Gough in the early 1950s, whereas the most recent estimates suggest that the population has plummeted to just 175,000 pairs.

“They do not start breeding until they are seven to 12 years old, and most birds die before they are old enough to breed. The breeding adults on Gough and Marion islands are therefore the elite birds, those that survived the harsh weather and ferocious storms of the Southern Ocean for [more than] 10 years to grow up and start breeding.

“During their long life span they are also able to raise dozens of chicks because they can breed for 30 years or more. Losing one of those precious adult birds to mice is therefore many times worse than losing the chicks.”

And if mice also learnt to attack and kill adult albatrosses and petrels, seabird population declines would accelerate dramatically, he said.

The mouse eradication project at Gough is headed by Peter McClelland, who has led several similar operations in New Zealand, Australia, North America and the Pacific.

He told the RSPB that having visited several islands where birds had been eradicated by mice, rats or cats, he was looking forward to helping remove the mouse threat on Gough Island before the birds fell silent.

The RSPB has not responded to queries about the risks to other seabirds if they accidentally eat poisonous mouse bait or scavenge on poisoned mice.

Holly Jones, an assistant professor of biology at Northern Illinois University, leader of a 30-member team of scientists who reviewed the results of previous eradication projects at 181 islands across the world, concluded that they resulted in “substantial gains” for conservation.

Jones and her colleagues nevertheless acknowledged that some eradication projects had led to short-term negative impacts in some cases.

“For example, birds may consume toxicant bait intended for invasive mammals, and scavengers may ingest toxicants and suffer secondary poisoning. In most cases, these negative impacts are transitory, because the eradication operation ceases when invasive mammals no longer pose a threat, and long-term benefits then accrue.”

In one case, 320 glaucous-winged gulls died after feeding on rat carcasses or consuming bait on Hawadax Island, Alaska – but the nest and population counts of these birds increased by an order of magnitude within a year after the eradication

“Invasive alien species are causing an extinction crisis on the world’s islands, but our research shows that this is one problem we have the tools to tackle, and the results can be spectacularly successful,” said co-author Stuart Butchart, head of science at BirdLife International. DM168