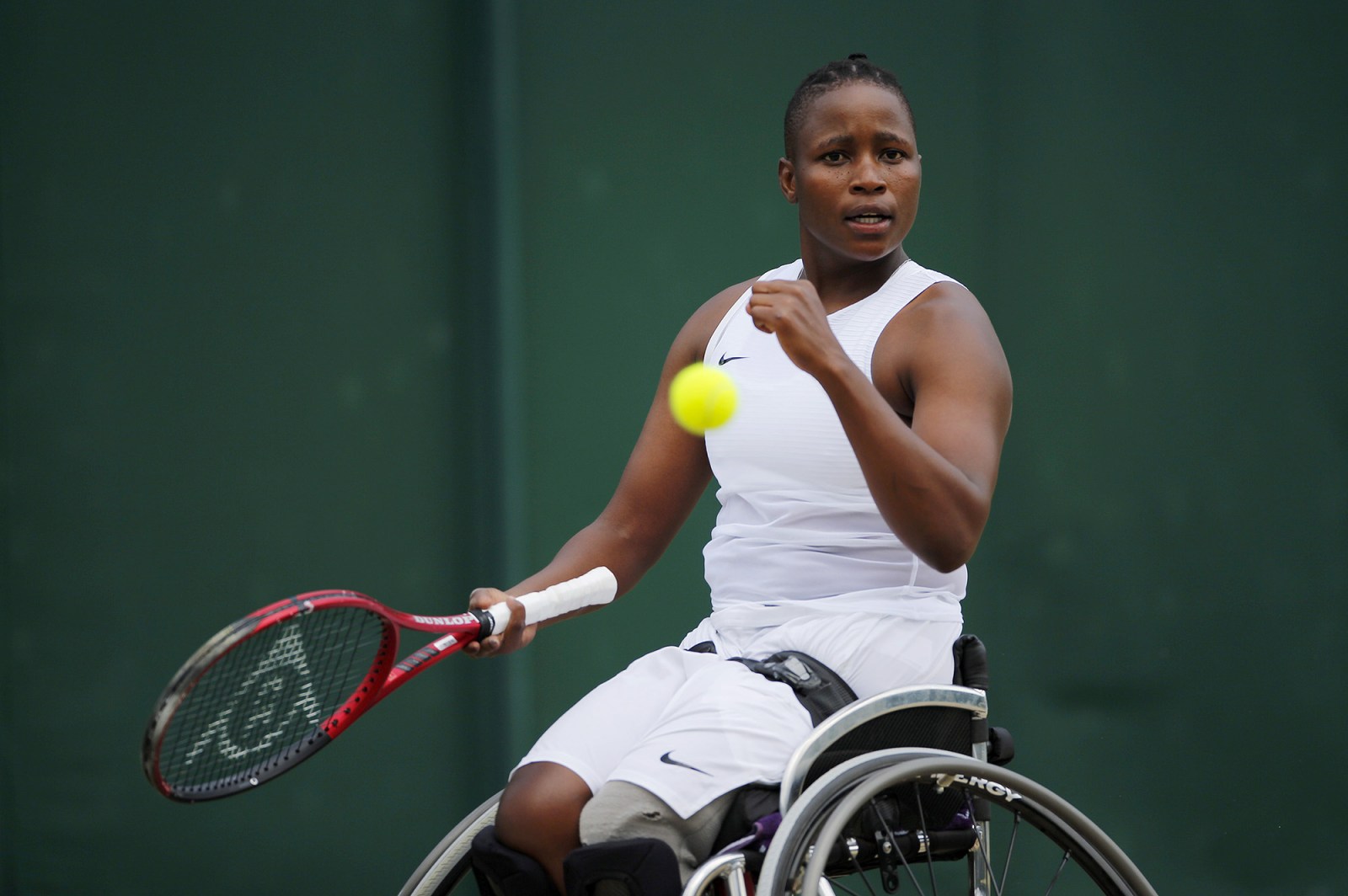 Kgothatso Montjane of South Africa during the Wimbledon Tennis Championships, Day 11, at the All England Lawn Tennis and Croquet Club, London, on 9 Jul 2021. (Photo: backpagepix / shutterstock)

History-maker Kgothatso Montjane can use the momentum from reaching her maiden major singles final to garner momentum for a Paralympics medal.

After starting the match with two consecutive game wins, Montjane couldn’t stem the turning tide as world number one De Groot stormed back to take control of the match.

That momentum saw De Groot win nine games in a row to take the first set convincingly and set a solid foundation in the second set.

Montjane, visibly frustrated as the tie slipped away from her, fought back to make it 3-1 in the second set.

Ultimately, it wasn’t to be for the South African with her opponent sealing her third Wimbledon singles title, and her 11th Grand Slam victory overall.

Following this latest victory, De Groot has stretched her overall head-to-head advantage over Montjane. She now leads the head-to-head score 16-14.

Disappointed as the Limpopo-born tennis player will be after also losing in the doubles final at Wimbledon, she has achieved what she set out to achieve.

The 35-year-old reached the final by dispatching Japan’s Momoko Ohtani 7-6(3), 4-6, 6-4 in the semifinals. After that victory, the world number five spoke about how the milestone of reaching the final was bigger than herself.

“For me, being out here is all about giving hope to Africans, not only South Africans, because we know how this sport is in our continent,” said Montjane.

“When the young generation sees someone doing well it inspires them to take up the sport. That is my hope, to keep instilling hope and encouraging the next generation to take it up.

I also want them to realise that no matter what challenges you face, as long as you want it, you can always get it.”

A place in the final of a major has long been coming for Montjane. In 2018, she became the first African woman to play at Wimbledon after she was awarded a wild card and powered all the way to the semifinals.

The double loss at Wimbledon puts Montjane at three lost Slam finals in 2021.

Earlier this year, Montjane lost in the Australian Open doubles final with her British partner Lucy Shuker. Coincidentally, the opponent in that game was De Groot, alongside her partner Aniek van Koot.

Before her latest defeat to De Groot, she had also managed to reach the last four of all four major championships.

Now Montjane’s attention will shift to preparations for the Paralympics in August, where De Groot will once again be favourite for gold. However, Montjane will fancy clinching a medal after this latest showing.

She was a member of the South African team at the 2008, 2012 and 2016 Summer Paralympics, but was not able to secure a medal. In 2021 and what is likely to be her final Games appearance, Montjane will be buoyed and will back herself to finish on the podium.

With the US Open remaining this year, Montjane has reason to dream of powering to victory. DM