A city on its knees: ‘Civilian patrols’ take charge in Durban as violence and looting continue 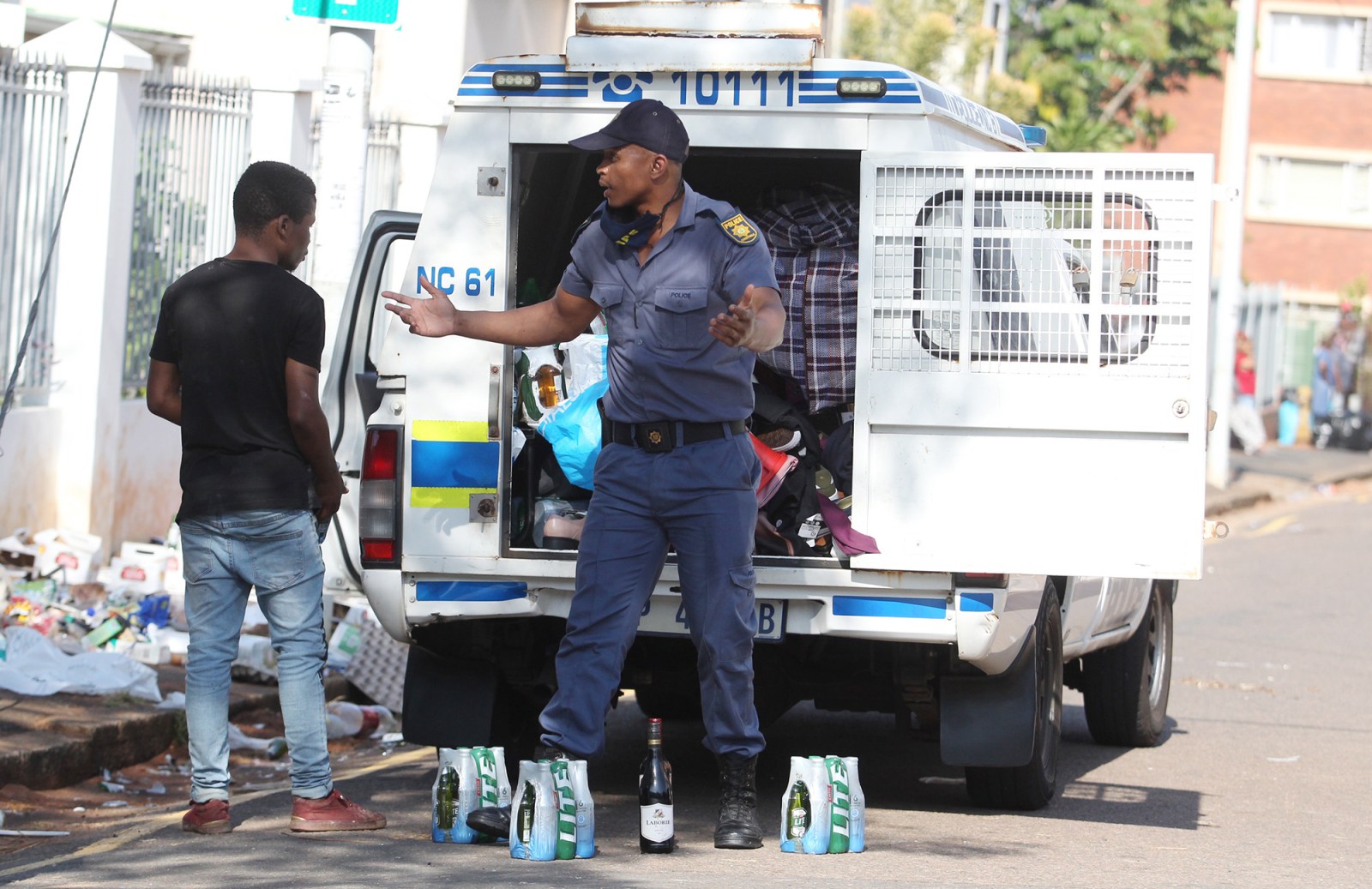 Thousands of protesters in and around Durban caused havoc, tearing the city apart, looting shops and burning some of the shops in the process. (Photo: Supplied)

This was not a drill and not a movie set either. As looters terrorised nearby areas, residents in Durban suburbs were forced to take their fate into their own hands – at least until the SANDF help was supposed to arrive.

Multiple gunshots rang out in the suburb of Umbilo, Durban, on Monday night as looters returned to the Queensmead Mall to access the Spar and a pharmacy inside the small, unobtrusive shopping centre that they had not been able to fully access earlier in the day.

Hours later, dozens of the looters were seen ambling along Bartle Road, the main one in the suburb, with full Spar trolleys, laughing as they offloaded their wares, presumably at homes in the neighbourhood, and then sped back to the mall to reload and repeat.

Others were met by drivers in vehicles – some of them luxury sedans – and loaded their loot into the cars.

“Amandla!” shouted one young woman, punching a slim fist into the air as she tried to balance a trolley full of booze while trotting down the road. “Amandla, amandla,” she giggled, visibly drunk.

Two other women pushed trolleys behind her, laughing.

A few kilometres down the road, a pall of black smoke rose into the air, the result of another fire, somewhere.

Umbilo, a so-called aspirational suburb for those looking to exit working-class areas, sits beside the more affluent Berea and, here too, protesters were looting in the brightness of day and well into the evening.

Residents of Glenwood, Glenmore, Umbilo and Rossburgh – close enough to the CBD for ease of travel but far enough to offer a suburban lifestyle – are among dozens of suburbs that have been hit by the violent unrest that has spewed into eThekwini and the province.

What may have started as a backlash to the incarceration last week of former president Jacob Zuma has evolved into a full-blown, nasty, violent spectre of greed and indifference.

The small, local Woolworths in Berea was thoroughly looted by 5pm on Monday, after criminals broke the large store windows and carried out goods. The items were loaded into SUVs and top-of-the-range bakkies. No one rushed. Teenagers were among the offenders. There were no police, no metro police and no private security in sight.

Two well-known and often used security companies in the area have not been engaging with offenders, leaving the local crime watch groups and residents “disgusted” and “terrified”. Neither security company answered calls from Daily Maverick.

The community is one of dozens throughout the province setting up civilian patrols and working alongside police as a stopgap before the South African National Defence Force (SANDF) finally gets to Durban.

“When we did a patrol earlier today… the people walking around who had done the looting… it was unbelievable. We don’t want another Marikana, but the issue with the SAPS is they are completely undermanned, overworked and overwhelmed,” Glenwood Community Watch coordinator Guy Perrins told the 80-strong crowd.

“It all depends on us now. It is up to us to respond. We have agreed with [the Umbilo police station] to [set up] an interim stopgap to contain the violence,  looting and criminality until the army can take over. This is only a temporary solution.”

Perrins asked that those carrying legal weapons, and who were prepared to patrol with the SAPS on Monday night, stand to one side.

“We are going to support SAPS. You will be shocked [that] there are only eight officers available tonight for the whole sector. I can’t go into detail.

“They want the armed guys to meet at the [Umbilo police station] and patrol and work under the jurisdiction of the SAPS. We will take direct instruction from the SAPS.”

Those without firearms were asked to be part of community patrols, working in two-hour shifts.

Perrins emphasised that the civilians would be “back-up” for the police. “We will not be standing at the front. We will not be frontline. We are at the back to support only. It is as simple as that.”

The station commander at Umbilo police station did not respond to calls or text messages from Daily Maverick.

In Musgrave, an upper-crust eThekwini area popular with the Jewish and Muslim communities, residents have secured the neighbourhood with barricades. Similar scenes are playing out in Hillcrest, Westville, the Bluff, Wentworth and Phoenix.

Liquor stores appear to be the favoured target for the looters in all of the areas.

WhatsApp groups have also popped up like pimples on the north and south coasts. Several communities have blocked off the entrances to their towns and are keeping watch as the criminals riot, businesses are gutted, infrastructure is damaged and fields are burnt.

It is unclear how much damage has been done in smaller towns, but in eThekwini, the metro put out a statement saying that the water supply in Ntuzuma, Botha’s Hill, Inanda and Umlazi “could be affected as it is not possible to attend to faults in these areas currently”.

Waste collection and street sweeping services have been suspended until further notice.

Clinics were closed, as were Covid-19 vaccine and testing sites. The city bus service was suspended until further notice.

By 8pm, as President Cyril Ramaphosa was addressing the nation on live television, saying that those responsible would be arrested and speedily prosecuted, gunshots continued to tear through the Umbilo night, the smell of gunpowder, burning buildings and tyres heavy in the air.

By 9pm, there was no indication that the defence force had reached the metro. Marauding looters continued to move unhindered and unafraid, by foot and in vehicles. DM