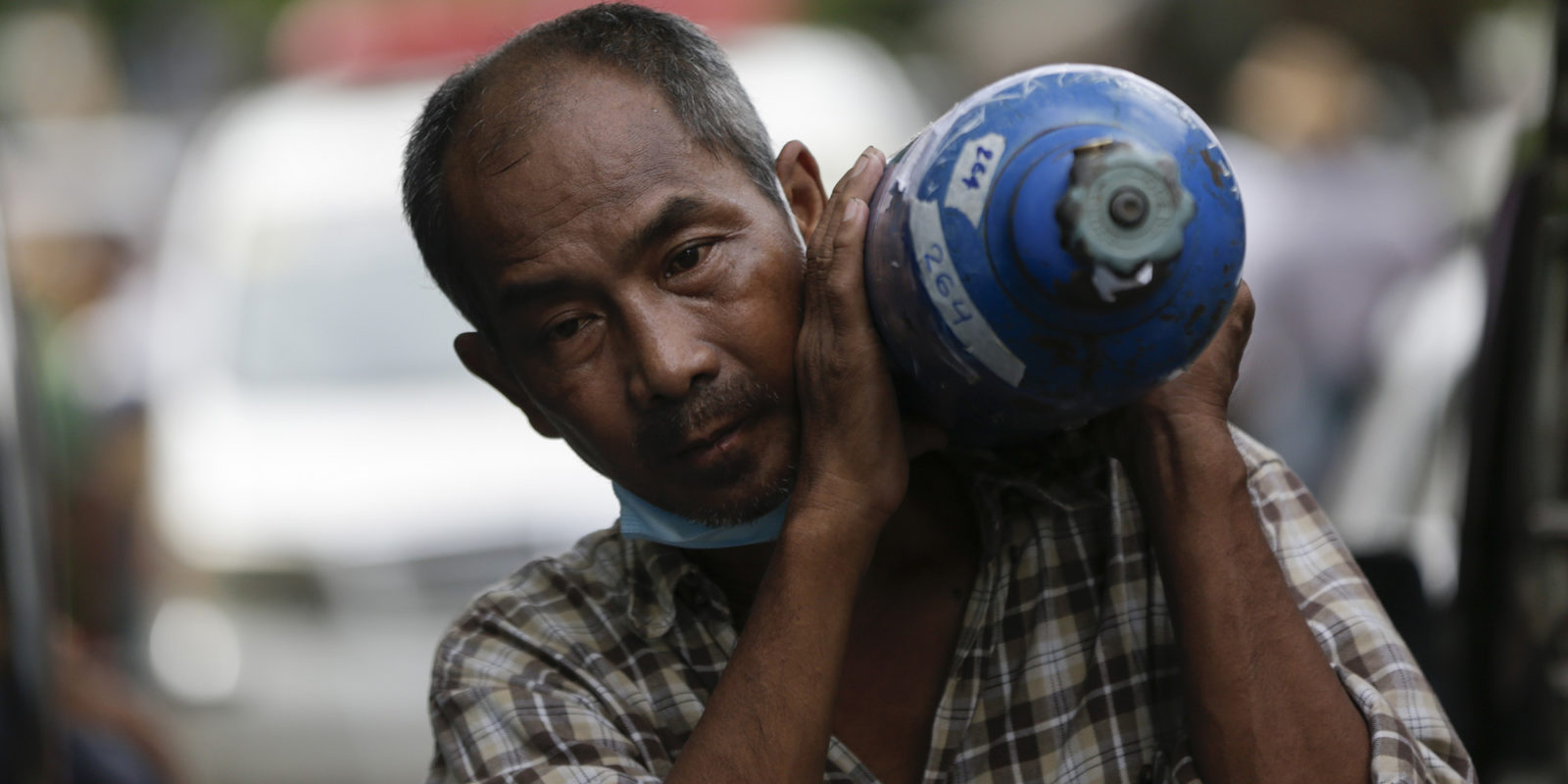 A man carries an oxygen tank on his shoulders near an oxygen factory in Yangon, Myanmar, 11 July 2021. Myanmar is facing a shortage of oxygen supplies to treat critical patients due to the rising number of cases of Covid-19 across the country. (Photo: EPA-EFE / Lynn Bo Bo) 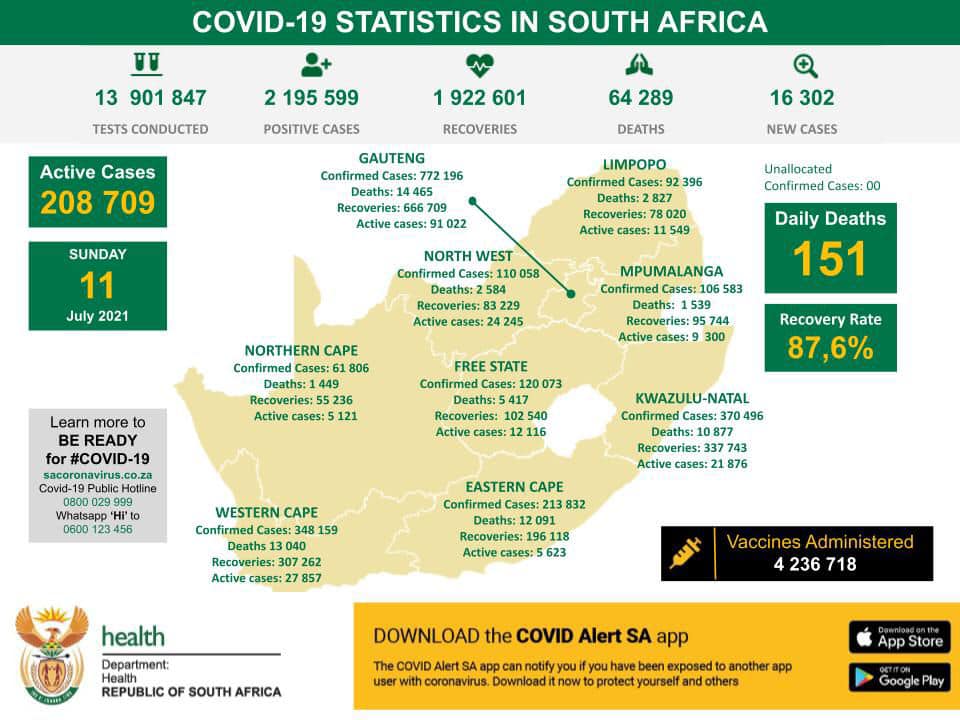 The US reported the most cases since mid-May, as the Delta variant takes hold in less vaccinated areas of the nation. Anthony Fauci, the top US infectious disease specialist, said “ideological rigidity” is preventing people from getting Covid-19 shots and voiced frustration at the struggle to boost vaccination rates.

Eric Adams, the Democratic nominee for mayor of New York City, said he’d recommend that vaccinated residents also wear masks in public indoor settings given the spread of the Delta variant. The UK government plans to issue guidance that people are expected to continue wearing masks in many public settings even after mandates are lifted in England.

French officials warned of a new wave of infection, though a minister said the nation is unlikely to impose more lockdowns. South African President Cyril Ramaphosa extended bans on alcohol sales and most public gatherings as the government struggles to bring a third viral wave under control.

President Cyril Ramaphosa extended bans on alcohol sales and most public gatherings for two weeks as the government struggles to bring a third wave of coronavirus infections under control.

The country will remain on virus Alert Level 4, the second-highest, although there will be adjustments to some curbs, including allowing restaurants to resume operating at half their seating capacity and gyms to reopen, Ramaphosa said on Sunday in a televised address. A nighttime curfew will remain in place from 9pm to 4am and schools will remain closed until 26 July.

“We have had to make difficult decisions, knowing that almost every decision carries a cost to the economy and society,” Ramaphosa said. “We remain committed to do all that we can to mitigate the impact of the lockdown on people’s livelihoods.”

As the French government warns increasingly of a “fourth wave” due to the now-dominant Delta variant of the coronavirus, the number of new cases remains low but is rising steadily. France reported 4,256 new cases in 24 hours, up 60% in a week based on a seven-day rolling average, and four deaths, while the number of patients in need of intensive care continues to decline.

President Emmanuel Macron is scheduled to address the nation on Monday evening, when he’s expected to speak about the risks of the Delta variant and measures to counter its rapid spread, including mandatory vaccination for healthcare personnel.

Separately, a key Macron ally said France must “live with the virus” rather than count on a new lockdown to contain the spread of a new variant of Covid-19.

The country could reintroduce limits on the number of people allowed in bars, restaurants and other venues, and extend the use of the so-called “health pass,” Junior Minister for European Affairs Clement Beaune said on Europe 1 radio on Sunday.

New York reports one death as cases trend up

New York state reported one death from Covid-19 on Sunday, even as new cases are rising and the positive test rate topped 1% for the first time since late May. Another 666 infections were reported by Governor Andrew Cuomo, with the seven-day average increasing after a dip to the level of a month ago.

The Delta variant accounts for 26% of New York City’s cases, which are also increasing, the city health department reported last week. That is about half the percentage nationally, according to the most recent estimate from the US Centers for Disease Control and Prevention.

“I believe that we should err on the side of caution,” Adams said on CNN’s State of the Union on Sunday. “I still wear my mask from time to time when I’m in crowded settings.”

Anthony Fauci, the top US infectious disease specialist, said “ideological rigidity” is preventing people from getting Covid-19 shots and voiced frustration at the struggle to boost vaccination rates in parts of the country.

“It’s not an easy solution,” Fauci said on ABC’s This Week on Sunday. “We’ve got to get away from this divisiveness that has really been a problem right from the very beginning with this outbreak.”

With vaccination rates lagging mostly in southern and Midwestern states, Fauci made the rounds of US Sunday morning talk shows to reinforce the Biden administration’s message that Covid shots are safe and offer strong protection against the Delta variant that’s now dominant in the US.

Libya reinstated a partial lockdown for two weeks, ordering the closing of restaurants and cafes and banning social gatherings, after reporting its highest-ever number of daily Covid-19 cases.

The US reported 33,933 new cases on Saturday, the most since mid-May, according to data compiled by Johns Hopkins University and Bloomberg. New infections rose for the third consecutive week as the Delta variant sweeps through pockets of unvaccinated Americans, jumping to almost 134,000 for the week ending Saturday. That compares with about 92,400 for the previous week.

Another 319 deaths were reported on Saturday. Weekly fatalities were up slightly from the previous seven days, but still about half the level of early May.

Separately, US vaccinations have plunged, despite the spread of the Delta variant that is fuelling a new rise in infections. The US recorded 599,000 vaccinations on Saturday, the lowest level since early January, according to the Bloomberg Vaccine Tracker. Daily vaccinations peaked in mid-April at almost four million. President Joe Biden missed his goal of administering at least one dose of vaccine to 70% of adults in the US by 4 July. That number is now 67.5%, according to the CDC.

The UK government plans to issue guidance that people are expected to continue wearing masks indoors, in crowds and on public transportation even after mandatory mandates are lifted in England on July 19, Vaccines Minister Nadhim Zahawi told BBC TV on Sunday.

Separately, Britain’s biggest business lobby called on the government to drop self-isolation rules when other Covid restrictions end, seeking to inject confidence into a push to get workers back to offices. A work-from-home recommendation expires 19 July, but self-isolation rules for fully vaccinated contacts of those who have tested positive for the coronavirus are set to be maintained until 16 August.

UK officials asked the nation’s vaccination committee to shorten the gap between coronavirus vaccinations to four weeks in a push to accelerate the administration of second doses, according to The Sunday Times. The request for advice on shortening wait times comes amid surging infections of the virus’s Delta variant. Health experts say that while full vaccination provides protection against serious illness and death from variants including Delta, one dose is far less effective.

Officials in Moscow believe the city has passed the peak of infections and will start to see levels stabilise, RIA Novosti reported on Sunday, citing the capital’s mayor, Sergei Sobyanin. Russia has reported more than 700 deaths in each of the past six days, with the seven-day average hitting a high of 725.

Data collected in Israel suggests that the protection afforded by the Pfizer-BioNTech vaccination weakens over time, the Ynet news website reported.

People who were among the earliest vaccinated figure prominently among the new cases, though even among this group, protection against severe illness remains strong, according to the data presented to the Health Ministry.

— With assistance by Ian Fisher and Alexander Sazonov.

"Information pertaining to Covid-19, vaccines, how to control the spread of the virus and potential treatments is ever-changing. Under the South African Disaster Management Act Regulation 11(5)(c) it is prohibited to publish information through any medium with the intention to deceive people on government measures to address COVID-19. We are therefore disabling the comment section on this article in order to protect both the commenting member and ourselves from potential liability. Should you have additional information that you think we should know, please email [email protected]ilymaverick.co.za"