Eswatini remains on a knife edge: USA joins calls for independent investigation into ‘inappropriate use of force’ 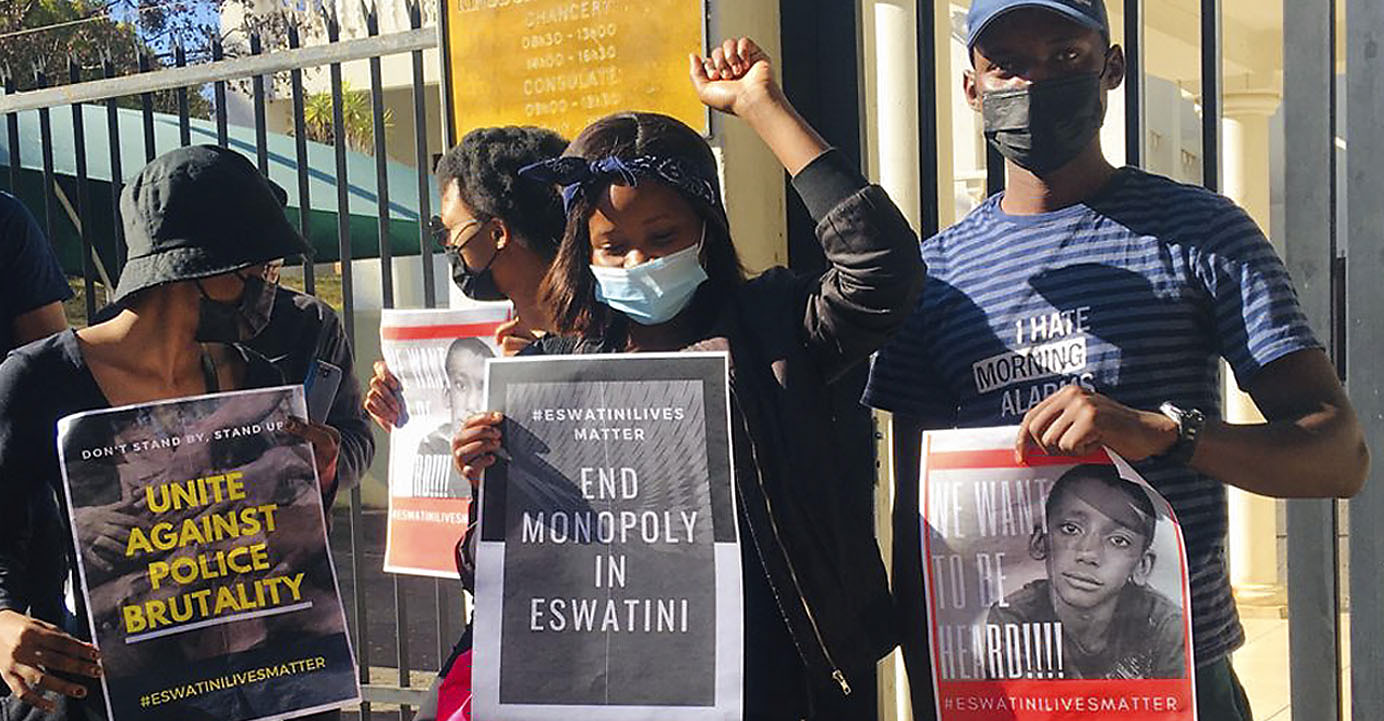 Images and videos of murder, torture, beatings, torchings and other violence in Eswatini have emerged, showing a kingdom where human rights do not exist. (Photo: Supplied)

By the middle of last week, with sheer and unbridled brute force, the Eswatini monarchy and its government had managed to force a retreat by pro-democracy protests and restore a semblance of calm to streets of various towns of Eswatini. However the calm masks a simmering anger.

In recent days people in Eswatini have told Maverick Citizen that King Mswati III’s regime is using threats and intimidation, particularly in the rural areas, to cow people back into subservience.

One eyewitness told our correspondent that during the first outbreak of protests young people were involved in targeted acts of arson particularly “of buildings associated with or owned by the Royal Family” as well as in looting.

This has been confirmed in other media reports.

However, when the army responded “they immediately opened fire on both the men manning blockades, but also local village compounds; they indiscriminately attacked and beat any local young men they could find whether they were involved in the blockades or looting or not”.

Our source says that in her village, just outside Mbabane, she witnessed the army “chase young people across the grasslands that backs onto the village, firing indiscriminately if they ran away or tried to escape.”

By the middle of last week protests had subsided. But, she says, in the days that followed, and on 7 July, the military returned and “were invading people’s homes and demanding proof of receipt of any electronic or furniture items in their house. If these could not be produced immediately they were being dragged from their homes, beaten with sjamboks and traditional whips; their electronic or furniture items were removed and they were forced to carry them to local shopping areas while the beatings continued.”

These reports were confirmed by Zweli Martin Dlamini, the editor of the independent Swaziland News, as well as Wandile Dludlu, the Secretary General of the People’s United Democratic Movement of Swaziland (PUDEMO). Dlamini told us on Friday that “people are being tortured in rural areas; they are instilling fear so people are afraid to protest – it’s the same strategy as used by Mugabe.”

Dludlu, speaking from Johannesburg on Sunday 11 July, told us that in the last few days there have been several further fatal shootings by the army in the villages of Mvutjini, Mashibhini and Hilltop, bringing the total number of dead to “between 75 and 80”.

Shot in the back

In the process of verifying reports of military and police brutality on 9 July we were able to talk to a 29-year-old man in his hospital bed in Mbabane. He had been shot in the back by soldiers on 30 June and had posted a graphic account of the shooting on Facebook, together with an x-ray showing the bullet lodged against his spine.

His Facebook post told of how soldiers of the USDF had opened fire on unarmed civilians walking by the side of the road “in an area where there was no looting or protesting”.

“I was shot and left lying on the ground for death until a stranger came by to assist me. I tried standing up but I couldn’t because my legs and feet were numb, I fell down. The stranger called friends who drove me to hospital. On the way there soldiers stopped us. They asked us where we were headed and when I told them they said I should have died. One soldier opened the back seat door where I was and told me to die already.”

When I spoke with him to confirm the incident he reported that the day before he had been visited in hospital by a policeman pretending to be a journalist and trying to get information from him. When his friend had asked him to leave the so-called journalist gave a false name and phone number.

The shooting victim, whose name we agreed not to publish, said that he wanted justice and that “someone must be held to account”. He hoped there would “not be a cover up, as if nothing had happened … now it’s like no one was shot by the army”.

Wandile Dladla also alleged that the USDF is trying to cover its tracks. He said that yesterday soon after 10 bodies had been examined by pathologists at the Good Shepherd Hospital, located in Siteki, one of the poorest rural centres in Swaziland, it had been “raided by police”. He said that there were still bodies in morgues that the police were refusing to release.

As a result of the violence PUDEMO is considering making a complaint to the International Criminal Court, said Dladla.

Covering up is exactly what South African PR agency, Vuma Reputation Management (VRM) has been accused of doing by the online publication New Frame, two of whose journalists were last week arrested and tortured, as well as by former DA MP Phumzile Van Damme.

According to New Frame, in a statement issued by associate editor Monica Laganparsad, VRM are “bending the narrative towards the interests of a highly repressive police state” and are being employed to ““manage” the reputation of a murderous and systemically dishonest dictatorship”.

Over the weekend Maverick Citizen sought comment from VRM who responded by saying that the claims were “factually incorrect” and that their role had been limited to facilitating interviews for Eswatini’s Ministers with the media in South Africa.

Significantly, however, in an interview on Sunday 11 July VRM’s joint CEOs, Tshepo Sefotlhelo and Palesa Madumo, informed Maverick Citizen that their contract with the government of Eswatini has been terminated “with immediate effect” and that their resignation had been “received and technically accepted by the client”.

In a statement sent to us they stated “we are extremely sensitive to the current political climate in Eswatini and condemn all acts of violence, let alone those involving our trusted partners in the industry – the media. We have never requested nor attempted to manipulate the media to act unethically, as they too will attest to, and reject any inferences to the contrary.”

“After several weeks of internal and external consultation” Madumo and Sefotlhelo say, “we have made the decision to resign the account”. Their conclusion was that “at this stage, our mandate: to position Eswatini as an attractive investment destination to assist in growing the economy can simply not be met in the current environment”.

In another development on the afternoon of 11 July the founder and part owner of VRM, Janine Hills, abruptly resigned from VRM stating in a Tweet that she “is abandoning her 49% shareholding in VRM and all monies owed with immediate effect”.

Hills says “The decision came after VRM has been linked through a reputation management contract with the Kingdom of eSwatini.”

A response to the issue on Twitter. #unity #statement pic.twitter.com/B1gpelUS7B

US Embassy drawn in

Without slick “reputation management” King Mswati III and his Acting Prime Minister, Themba Masuku, may now have great trouble hiding their direct responsibility for the violence.

After initially being quiescent on the violence the US Embassy has come out in support of inclusive negotiations.

In a strongly worded statement issued on 8 July they condemned “in the strongest terms possible, the inappropriate use of force” and “urge[ed] HM King Mswati III, the Government of the Kingdom of Eswatini, and SADC to listen to the concerns of all stakeholders and to facilitate genuine dialogue to open the space for reform and to resolve the situation peacefully and productively”.

The USA described protesters’ calls for reform as “legitimate and genuine” and demanded that “all incidents be fully and transparently investigated. All perpetrators, regardless of affiliation, must be held accountable according to rule of law”.

It is believed the US decided to intervene more directly after shots were fired by Swazi soldiers at an Embassy car on 1 July. Maverick Citizen is investigating reports, from a knowledgeable source, that the US Ambassador may have been in the car when it was fired upon. As a result a special detachment of US Marines has been deployed to guard the embassy.

Finally, the Southern African Development Community (SADC) is also being drawn into the conflict: and civil society organisations are waging an effective campaign to ensure that they have a seat at any negotiations that take place under the auspices of SADC. A letter sent to SADC by the Eswatini Institute for Democracy and Leadership on 6 July (see our report last week) was acknowledged by Jorge Cardoso, Director of the SADC Organ on Politics, Defence and Security Affairs on 7 July. Cardoso replied confirming that there would be “a follow-up mission to continue consultation with stake-holders … on a date to be confirmed”. This has not yet taken place although there are unconfirmed rumours that SADC may be back early this week.