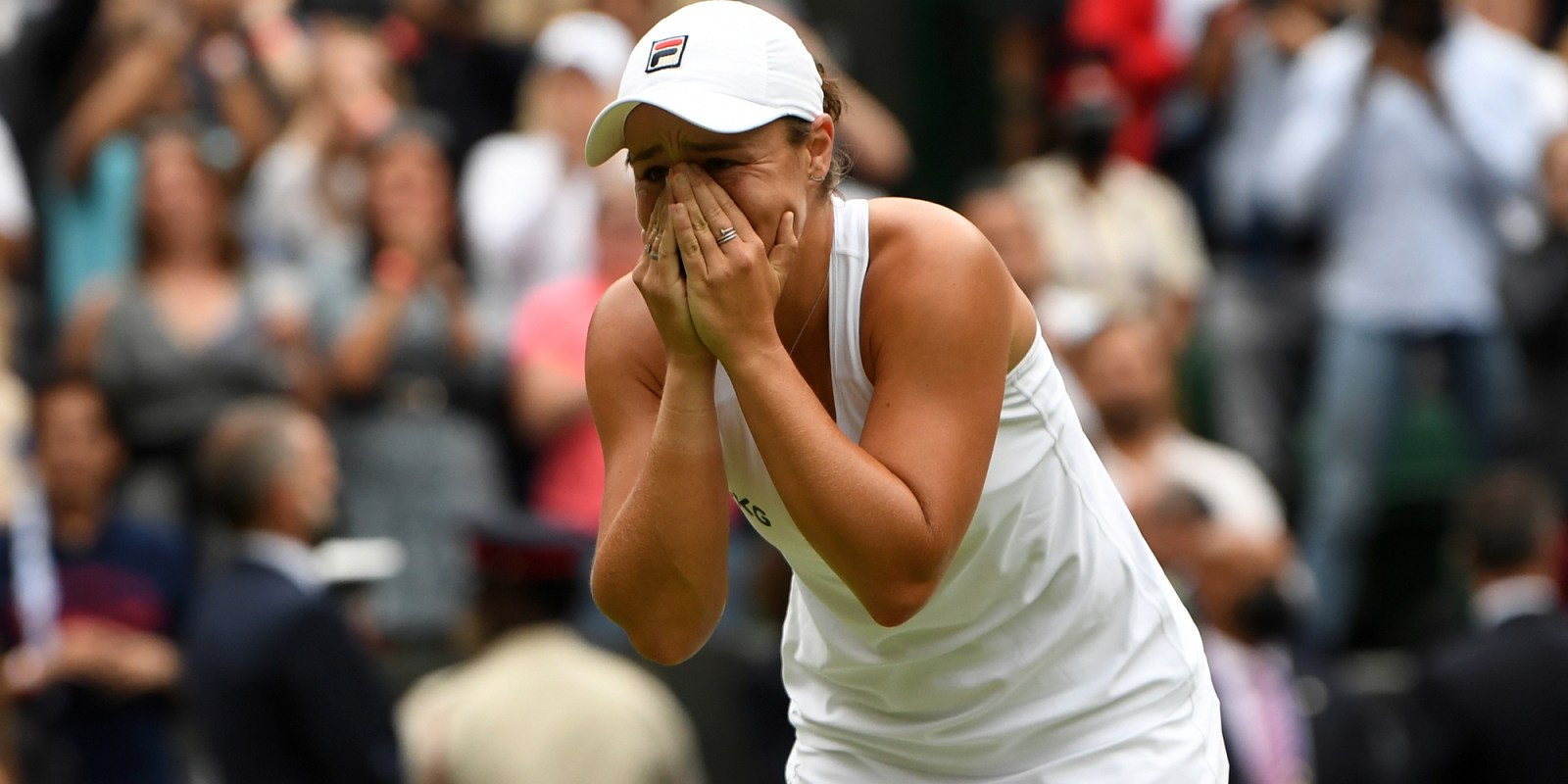 Ashleigh Barty of Australia rejoices after her match point during the women’s final against Karolina Pliskova of Czech Republic at the Wimbledon Championships on 10 July 2021. (Photo: EPA-EFE / Neil Hall)

Ash Barty, like Evonne Goolagong, takes great pride in her indigenous heritage and has worn a scalloped-edged retro outfit in honour of the Australian trailblazer.

Ash Barty joined an illustrious list of Australian names etched on Wimbledon silverware as she beat Karolina Pliskova in a nerve-shredding final to become the first woman from Down Under to win the singles title in 41 years on Saturday.

The 25-year-old world number one looked on course for an embarrassingly easy triumph as Pliskova suffered one of the worst starts ever seen in a Wimbledon final, but eventually needed her best to claim a 6-3 6-7(4) 6-3 victory.

After Pliskova struck a backhand into the net following one hour and 55 minutes of see-sawing action, Barty sank to her knees in realisation of fulfilling a childhood dream.

With tears running down her cheeks she then climbed into the stands towards her team, a tradition started by compatriot Pat Cash when he won the men’s singles in 1987.

When she returned to the lush grass, she spoke of her joy of emulating her idol Evonne Goolagong who won the first of her two Wimbledon titles 50 years ago, before adding her second in 1980, since when no Australian woman had won the singles.

Barty, like Goolagong, takes great pride in her indigenous heritage and has worn a scalloped-edged retro outfit in honour of the Australian trailblazer.

“I said, just keep fighting,” Barty, whose participation at Wimbledon had been in doubt after she withdrew from the French Open last month with a hip injury, said on court after receiving the Venus Rosewater Dish from the Duchess of Cambridge.

“Kaja [Karolina] brought out the very best of me today. It took me a long time to verbalise that I wanted to win this incredible tournament… being able to live out my dream right now is better than I ever could have imagined.

“I didn’t sleep a lot last night as I was thinking of all the what-ifs, but I felt at home out on the court. I hope I made Evonne proud.”

Barty won her maiden Grand Slam at the 2019 French Open but joining the likes of Goolagong, Margaret Court, Rod Laver, Roy Emerson and John Newcombe as a Wimbledon champion cements her name amongst Australian sporting greats.

“So happy for you, our dreams come true, what a fight,” four-time Wimbledon champion Laver said on Twitter.

Not since 1977 had two first-time Wimbledon finalists gone head to head in the women’s championship match. But for the first set, only one showed up.

Eighth seed Pliskova, whose previous Grand Slam final ended in defeat at the US Open in 2016, suffered every player’s worst nightmare as she froze solid.

Her feet seemed stuck in clay, her arms in a straitjacket and her mind in a fog as Barty helped herself to the first 14 points of the match with clinical precision.

It felt like a slow-motion train crash and the 15,000 Centre Court crowd did not know whether to watch or turn their faces away out of respect for the suffering Czech.

When she got on the scoreboard thanks to a Barty error, a huge cheer broke the tension and Pliskova smiled awkwardly.

A double fault left her 0-4 down though and it was hard to see how she would win a game, let alone the title.

With Barty rampant, it looked as though she might not require much more than the 23 minutes it took Suzanne Lenglen to defeat Molla Mallory in 1922, the shortest final on record.

But gradually the 29-year-old Pliskova defrosted and she broke Barty’s serve to love to win her first game, only to surrender serve for the third time in the match.

En route to the final, she had been broken only four times and served 54 aces.

Barty got bogged down in mediocrity and she lost consecutive games before sealing a bizarre opener in 28 minutes.

When Pliskova’s gremlins returned with two double faults to drop serve early in the second set, the title loomed for Barty.

But the Queenslander began to tighten up and incredibly, after what had gone before, she found herself serving to stay in the second set at 4-5 as Pliskova’s power game began to click.

Like much of Australia, former professional Dellacqua stayed up into the early hours to watch Barty beat Pliskova and end the long wait since her idol Evonne Goolagong claimed the second of her All England Club titles in 1980.

“Beyond proud of you. Wimbledon Champion! You bloody ripper,” Dellacqua posted on Twitter, using an Australian term of exuberant praise.

She added in a Channel Nine TV interview: “It’s just extraordinary. She does it with such grace and with such integrity, she sets a really good example for sport in Australia about how to be a champion.”

Barty’s triumph was lauded by a who’s who of Australians on social media, ranging from Laver’s “congratulations” to pop star Kylie Minogue’s “ASSSSSSSSHHHHBAAAARRRTYYYYYYYY!!!”.

Cathy Freeman, whose gold medal run at the 2000 Olympics is widely regarded as a seminal moment in Australia’s relationship with its indigenous community, tweeted of her “massive pride” in her fellow Aboriginal athlete.

Barty’s triumph came on the 50th anniversary of Goolagong’s first Wimbledon title, and the 25-year-old said after her win that she hoped she had done the indigenous sporting trailblazer proud.

Former French Open champion Barty was already one of Australia’s favourite athletes, beloved as much for her grounded personality as for her success. DM