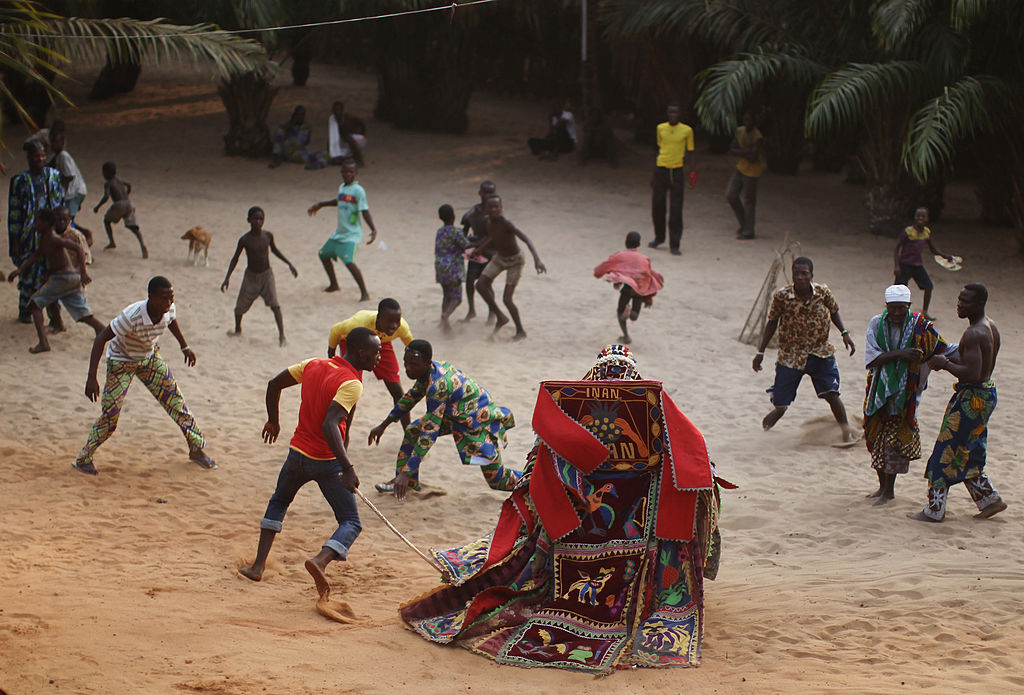 An 'Egungun' spirit performs during a Voodoo ceremony on January 10, 2012 in Ouidah, Benin. The Egungun are masqueraded dancers that represents the ancestral spirits of the Yoruba, a Nigerian ethnic group, and are believed to visit earth to possess and give guidance to the living. Ouidah is Benin's Voodoo heartland, and thought to be the spiritual birthplace of Voodoo or Vodun as it known in Benin. Shrouded in mystery and often misunderstood, Voodoo was acknowledged as an official religion in Benin in 1989, and is increasing in popularity with around 17 percent of the population following it. A week of activity centred around the worship of Voodoo culminates on the 10th of January when people from across Benin as well as Togo and Nigeria decend on the town for the annual Voodoo festival. (Photo by Dan Kitwood/Getty Images)

The Yoruba are among the most storied groups in Africa. Their ancestral homeland cuts across present-day southwest Nigeria, Benin Republic and Togo in West Africa. They number between 35 and 40 million. Their dynamic culture, philosophy, arts, language, sociology and history have attracted numerous studies.

This story was first published on The Conversation.

What has been missing in this rich literature is a deep history that benefits from a diverse range of disciplines and sources. Scholars have long recognised the value of combining different methods and sources, beyond documentary and oral traditions, to study pre-colonial African history.

I wrote The Yoruba: A New History to fill this gap. The book is a product of the studies I have carried out in different parts of Yoruba region over the past 30 years as an archaeologist, anthropologist, and historian.

By providing insights from different disciplines I have been able to uncover new themes in Yoruba history.

I provide a 2,000 year account of cultural changes and continuities, how local and global processes have affected social transformations, the meanings people made out of their experiences, and how these affected actions, and what the consequences were.

I weave multifaceted stories about ups and downs, successes and failures, coping with risks and opportunities and solving existential crises. These have ranged from climate change to shifting global political economies, and the impact on the ideas of gender, class, and power, among others.

In the first half of the book, I account for how the Yoruba community evolved on the western side of the Niger-Benue Confluence in present-day Nigeria about 4000 years ago and the dramatic changes that stimulated their rapid geographical expansion between 300 BC and AD 300.

The climate change that commenced in the last quarter of the first millennium BC, known as the Big Dry, sparked this expansion process. Extreme droughts pushed families and social groups to look for new water corridors and resources. The early centuries of this ecological crisis were also a period of new technological innovations, especially the adoption of iron metallurgy.

By the time the Big Dry ended and optimum wet conditions returned in the 3rd AD, the Yoruba had expanded from the Niger-Benue Confluence as far as the Atlantic coast. The second half of the first millennium AD was a period of rapid socio-political innovations. The idea of divine kingship alongside a unique system of urbanism evolved in multiple places and became the basis of social order.

Between the 12th and 14th centuries, Ile-Ife was the centre of the Yoruba world. It was an emporium and holy city. Its economy was based on a novel technology of glass manufacture mainly devoted to making beads, the primary currency of power, authority and wealth in the region.

Ile-Ife remains the only place in sub-Saharan Africa known as an industrial centre for primary glass production.

Ile-Ife used its technological and economic advantages to restructure the ideology of divine kingship. It also used this advantage to standardise the Yoruba religious system (Orisa pantheon) and make itself (literally) the beginning and end of time. It brought vast territories, as far as the River Niger and the Atlantic coast, under its political control and cultural influence. These included even non-Yoruba-speaking peoples.

For these and other reasons, I concluded that Ile-Ife built the first empire in the Yoruba world during the 13th and 14th centuries.

The Ife Empire came to an end by 1420 due to several colliding factors. These included long spells of drought that kicked off around 1380 across West and East Africa (the equivalent of the Little Ice Age in the northern hemisphere), political disturbances in Western Sudan (for example, the collapse of the Mali Empire), and internal crisis within the Ife Empire.

Conflict, war, disease, famine, and dynastic changes rocked most of the Yoruba world and other parts of West Africa.

It was not until the late 16th century that the region began to recover, thanks to regional cooperation notably championed by Oyo. By then, the political landscape had been permanently changed. Some of the minor kingdoms of the Classical period were now in control (for example, Oyo), and several new states emerged from the rubbles of the old ones.

This was also the beginning of the integration of the Yoruba into a newly emerging global political economy that focused on the Americas and the European maritime might.

The book explores how the commercial revolution of this early modern period, especially the Atlantic slave trade, shaped Yoruba political landscape, culture, and society starting from the early seventeenth century through the mid-nineteenth century.

During this time, the Yoruba economy became far more monetised than before. There was an overall increase in productivity due to economic specialisation. The cowrie currency that powered this economy was imported while the external trade of the region was driven by a dependency on imported addictive commodity – tobacco. Both cowries and tobacco exports were exchanged for human cargo in the Bight of Benin, where almost a million Yoruba entered the Middle Passage, mostly between 1775 and 1840.

The second half of the book focuses on the effects of this new experience on social valuation, the theory of rights, privileges, and power, as well as gender and class relations.

I bring it to a close with the collapse of the Oyo Empire, the second empire in Yoruba history, and its aftermath in the mid-nineteenth century.

In the concluding chapter, I reflected on what this 2000-year history means for the present.

The book tells the story about the unique gifts that the Yoruba people gave to the world in social organisation, resilience, technology, arts, philosophy, religion, and ethics.

From time to time, many scholars, including me, have lamented how African historical experience rarely informs public policies in contemporary Africa, mainly because policymakers have a poor understanding of that history.

An awareness of the challenges faced by ancestral Yoruba and how they solved those problems for more than 2000 years is as important as understanding why they came short in some instances.

In searching for solutions that address contemporary challenges, it would help to pay more attention to African history. DM/ML