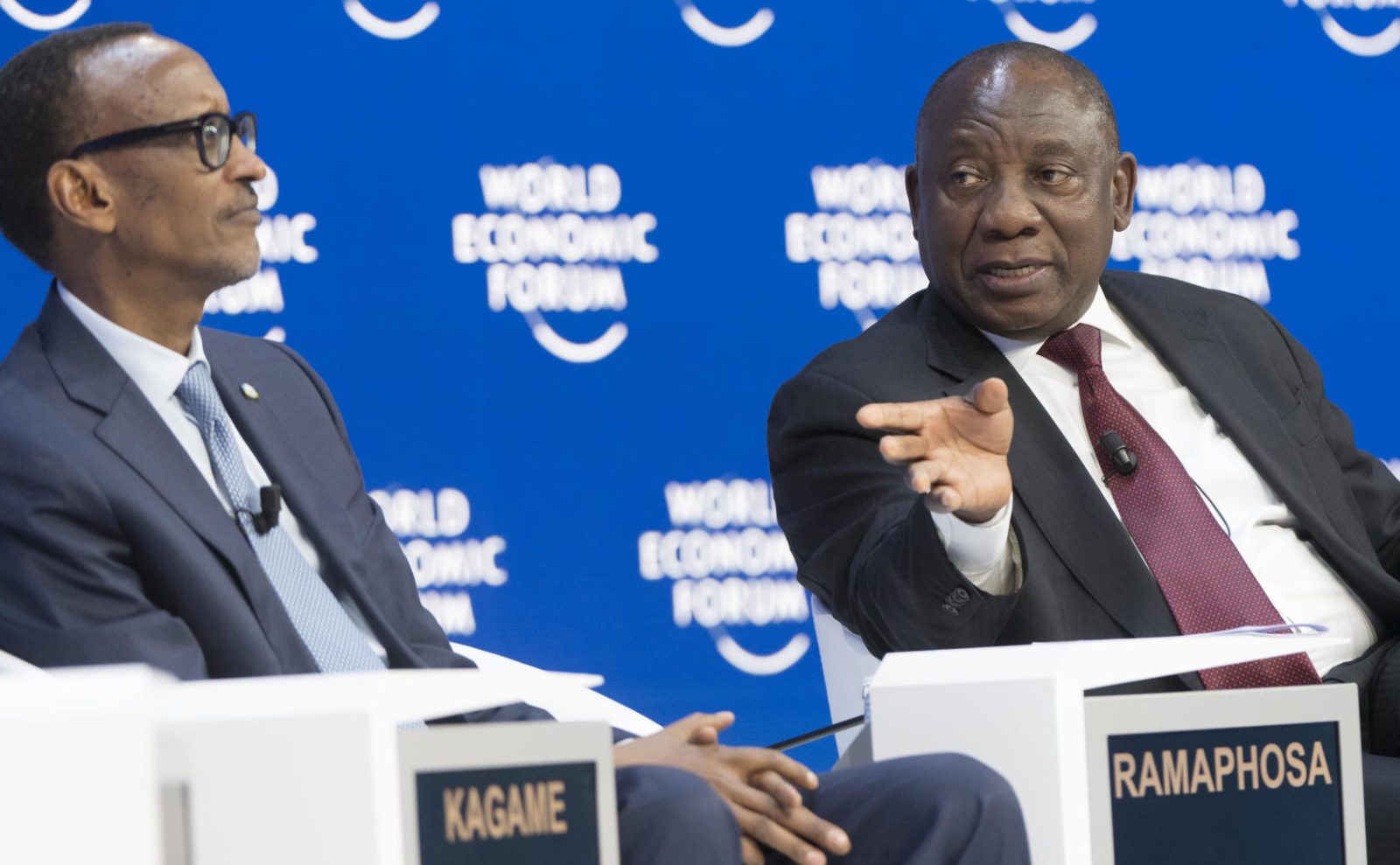 President of Rwanda Paul Kagame and President of South Africa Cyril Ramaphosa attend a panel session during the 49th Annual Meeting of the World Economic Forum, WEF, in Davos, Switzerland, 24 January 2019. Kagame and Ramaphosa agreed to normalise relations between Rwanda and South Africa as far back as 2018. (Photo: EPA-EFE/LAURENT) GILLIERON

The intention to normalise relations between South Africa and Rwanda has long been on the cards. Presidents Cyril Ramaphosa and Paul Kagame agreed in Kigali in 2018 to do so. But there were a few false starts under South Africa’s international relations minister Lindiwe Sisulu and her Rwandan counterparts back then.

Finally, the two current foreign ministers, Naledi Pandor (South Africa) and Vincent Biruta (Rwanda) met last month in Pretoria. They agreed to establish a joint mechanism co-chaired by the two of them, plus a technical team of senior officials and draft roadmap to restore relations to where they were in 2013.

In other words, to where they were before Kagame’s former intelligence chief Patrick Karegeya, an exile in South Africa, was strangled to death with a curtain cord in a Johannesburg hotel in 2013. And before the third or fourth attempt on the life of his friend and political ally General Kayumba Nyamwasa — Kagame’s former military chief of staff — in March 2014 near Johannesburg.

Both had been close allies of Kagame but had fallen out with him and fled to South Africa, where they helped form an opposition political party, the Rwanda National Congress (RNC). Both were almost certainly victims of Kagame’s government.

A belated inquest into Karegeya’s death in 2019 revealed that the South African authorities certainly thought so. The magistrate compelled them to request extradition of the two suspects, which they did last year. No response from Kigali has been received so far, and none is likely.

Pretoria certainly suspected Kigali was behind the attempts on Nyamwasa’s life. That became evident when South Africa expelled three Rwandan diplomats and one Burundian in March 2014 after the latest assassination attempt. Unabashed, Rwanda retaliated by sending home six South African diplomats from Kigali.

The expulsions left only the High Commissioners in place and severely impaired diplomatic relations. After Ramaphosa and Kagame agreed to kiss and make up, they tasked Sisulu and Rwanda’s then foreign minister Louise Mushikiwabo to do the legwork. But Sisulu rather bungled things when she publicly revealed that she had met Nyamwasa and that he was prepared to negotiate with Kagame.

Kigali regards Nyamwasa as a “terrorist” to be eliminated, not a political opponent to be negotiated with. In the flare-up that followed, Sisulu was insulted on Rwandan government-linked social media sites and the normalisation process stalled.

This week the technical team established by Pandor and Biruta met for two days in Kigali for the first time. South Africa’s new High Commissioner to Rwanda, Mandisi Mpahlwa, told ISS Today they had a “frank debate” in a successful meeting about the issues bedevilling relations. He said a report would be presented to the two foreign ministers, which they would consider at the first meeting of their joint mechanism soon.

Mpahlwa said he couldn’t reveal the content of the discussions beyond saying “there are things South Africa wants from Rwanda and things Rwanda wants from South Africa.” Of course. But what are these things?

Clearly, South Africa wants assurances that Rwanda will stop sending assassins to kill Rwandan dissidents on its soil. As recently as February this year, Seif Bamporiki, a local RNC leader, was shot dead in Cape Town’s Nyanga township. Although police rather too quickly said they suspected robbery was the motive, RNC members said the murder resembled other Kigali-ordered political assassinations.

South Africa is not the only country affected. In April this year, Rwandan journalist Ntamuhanga Cassien, who fled his home country some years ago, was picked up in Mozambique by men claiming to be local police, but which included one Rwandan, according to fellow journalists. Cassien hasn’t been heard from since.

But if Pretoria wants Kigali to stop such assassinations as a condition of normalisation, and perhaps also wants Karegeya’s two suspected killers extradited, what Rwanda wants is not quite as clear. Rwandan oppositionists in South Africa believe that Kagame seeks a return to the visa-free travel of Rwandans to South Africa. But is that all?

The RNC claims to be a legitimate political party pursuing change in Rwanda by peaceful means. Kigali, however, insists it is a “terrorist” organisation with an armed wing based in the eastern Democratic Republic of the Congo dedicated to overthrowing the government by force. It apparently justifies the assassination attempts — even if it doesn’t openly acknowledge them — on the grounds that it’s fighting fire with fire.

So is Kigali demanding that Pretoria curtail the political activities of the likes of Nyamwasa as its price for normalising relations? Or perhaps expel them?

That’s not clear. But a worrying sentence in the 4 June statement by Pandor and Biruta suggested a parity in transgressions by both sides: “Both countries must value and respect the international laws and regulations that govern relations between countries, including territorial integrity and national sovereignty.”

Etienne Mutabazi, RNC spokesperson in South Africa, says it would be unconstitutional for South Africa to restrict Rwandans’ freedom of political expression in South Africa. Noel Twagiramungu, a Director at the Africa Center for Strategic Progress in Washington, believes the threat that Pretoria might sacrifice the likes of Nyamwasa in some way to normalise relations “is real”.

It seems doubtful however that Pretoria will take any action against the likes of Nyamwasa. Or that Kigali will extradite the suspected Karegeya assassins.

This is not uniquely South Africa’s problem. As Michela Wrong reveals in shocking detail in her new book Do Not Disturb: The Story of a Political Murder and an African Regime Gone Bad, Kagame’s government has been assassinating or trying to assassinate its political enemies in several other countries for years. Is it even possible to normalise relations with such a regime? DM