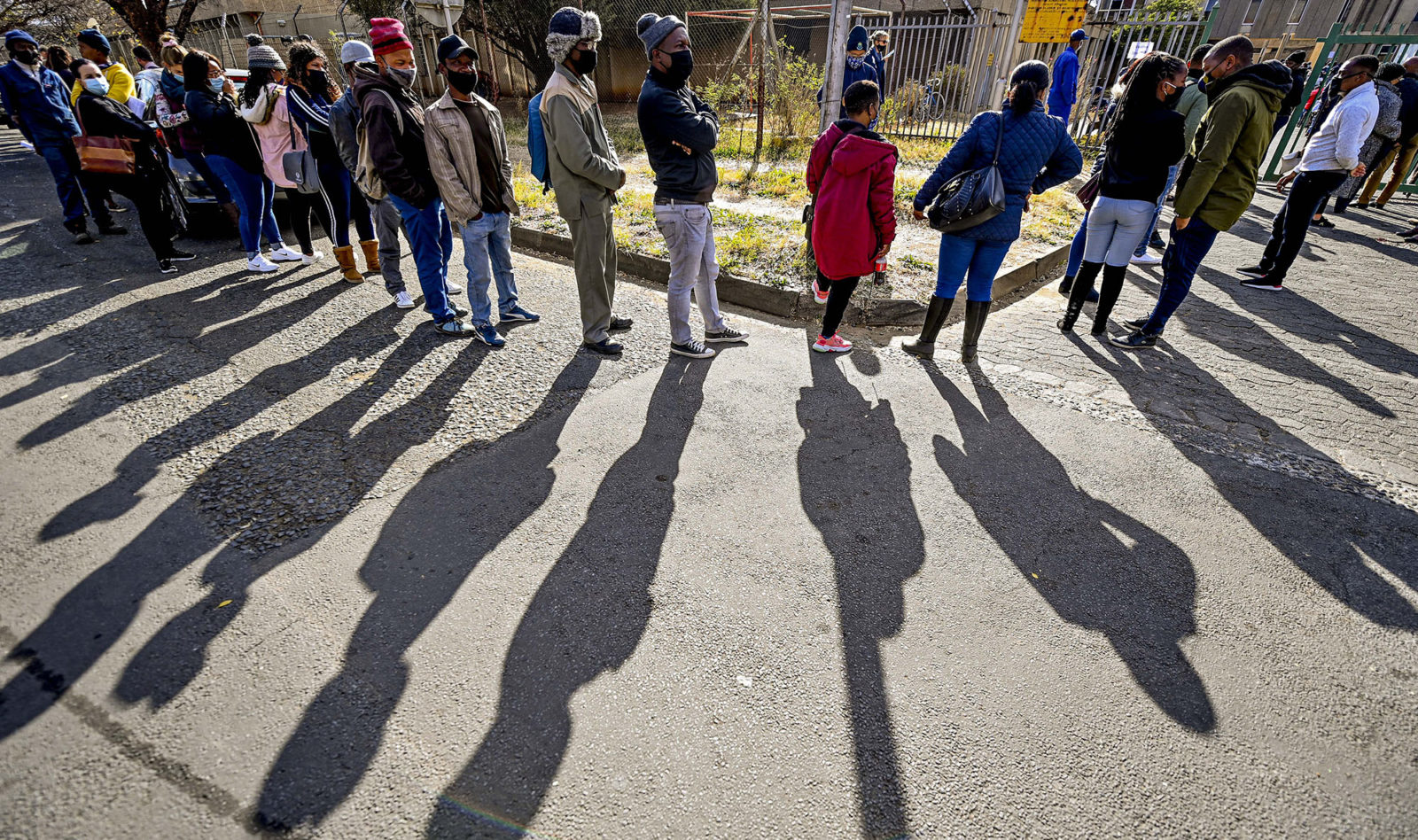 Teachers and support staff queue for their Covid-19 shot at Universitas Hospital in Bloemfontein on 24 June 2021. Other public sectors where vaccination drives are already under way include the police. (Photo by Gallo Images/ Volksblad/Mlungisi Louw)

In an effort to ramp up the country’s vaccination drive, Kubayi-Ngubane announced on Friday morning (9 July) that registrations for over-35s will open next week, as the country battles a huge rise in coronavirus infections.

More than 22,000 new cases have been registered since Thursday, with a positivity rate of 30.4%.

She said she will study recommendations from the Department of Health. The department’s director-general, Sandile Buthelezi, confirmed that a recommendation had been provided to the National Coronavirus Command Council based on current outbreak levels in the country.

Kubayi-Ngubane said Gauteng is still bearing the brunt of the third wave but indications are that the number of cases are peaking in the province.

“We are extremely worried about the rise in cases in other provinces,” she said, adding that all efforts are being made to ramp up the vaccine roll-out.

So far more than four million people in the country have received at least a first dose.

The focus would also shift to district level now.

Kubayi-Ngubane said that following a meeting with Treasury, funds have been cleared to allow them to start vaccinating over weekends from 1 August.

While they were receiving a number of requests to prioritise certain sectors, the department still believed the best way to roll out the vaccine is by age group.

Deputy Health Minister Dr Joe Phaahla said all student doctors who have been waiting for placement at hospitals around the country have been placed in intern positions.

Dr Nicholas Crisp, the department’s deputy director-general in charge of the vaccine roll-out, said they are on track to meet the goal set by President Cyril Ramaphosa to vaccinate 300,000 people a day by the end of August.

So far they have reached about half of the population over the age of 60, he said, adding that the country has enough stock for 18 days.

“This is the strongest position we have ever been in.”

He said most provinces are making progress in their vaccination drives but Gauteng’s efforts have been hampered by high infection levels. They were confident that new initiatives, including a “drive-through” vaccination centre, would allow the province to accelerate its efforts.

Crisp said there are plans for donor-funded vaccination programmes in highly concentrated populations. They were also looking at leveraging workplace programmes, such as those at mines, to move to communities once the workers had been vaccinated.

They would start vaccinating members of the South African Defence Force on Friday. Other public sectors where vaccination drives are under way include teachers and the police.

Crisp said they are also going to start using medical students and student nurses especially to help over weekends.

An improved vaccination dashboard to indicate the country’s progress had gone live on Thursday night.

The CEO of the South African Health Products Regulatory Authority, Boitumelo Semete-Makokotlela, said they are reviewing applications for the Sinopharm and Sputnik vaccines for use in South Africa.

The director of KRISP (KwaZulu-Natal Research Innovation and Sequencing Platform), Professor Tulio de Oliveira, said they were seeing a rapid increase in cases, in especially Limpopo, KwaZulu-Natal and the Western Cape. The Delta variant was dominating the current outbreak.

“Where Delta dominates we are seeing an increase in deaths.”

The increase in Limpopo was “almost like a rocket launching” and the same was happening in KwaZulu-Natal even though the numbers were still relatively low. A rapid increase in cases driven by the Delta variant had also been seen in the Western Cape.

The good news, De Oliveira said, is that the vaccines now in use in South Africa offer high levels of protection against severe disease caused by the Delta variant. He said they were encouraged by data from the UK where the Delta variant currently dominates

“Even the first dose of the Pfizer vaccine shows very high effectiveness against hospitalisation and death.”

He said it has also been confirmed that the Johnson & Johnson vaccine has been shown to be potentially more effective against the Delta variant than against the Beta variant which drove the second wave in the country.

Other variants of concern – a mutated version of Delta, known as Delta+, and Lambda – which are driving a wave of infections in South America, had not been detected in South Africa yet.

However, De Oliveira said the current dominant variant in the country, Delta, is increasing very quickly in settings where low numbers of people have been vaccinated.

The head of the Western Cape health department, Dr Keith Cloete, said the province is “solidly in the third wave” and daily oxygen use, deaths, hospital admissions and positive laboratory tests were on the rise.

The province was registering more than 2,000 cases a day, with a 29% week-on-week increase in hospital admissions.

Cloete said they have compared the three waves and the third appears to be slightly slower.

“We are seeing different patterns.”

He explained that a sharp increase in cases had been predicted towards the middle of July.

Their strategy was to encourage protective behaviours (masks, physical distancing and hand sanitising) and to scale up their Covid-19 response while scaling down other health services.

They had learnt during the second wave how to de-escalate health services while maintaining essential care. They had maintained field hospital capacity by retaining extra health workers from the second wave, and would bring this back online. This included a mass fatality centre where bodies would be processed to avoid a back-up.

Cloete said that since a ban on alcohol sales came into operation their trauma cases have dropped by 25%, with a decrease of 33% over weekends.

Currently, 67% of their frontline staff had been vaccinated. “We are seeing a big impact. So far there have been no deaths under vaccinated people.”

The Western Cape was experiencing a steep wave of infections driven by the Delta variant. “We anticipate that it could be the size of the second wave, but we are awaiting a new model due next week.” DM/MC