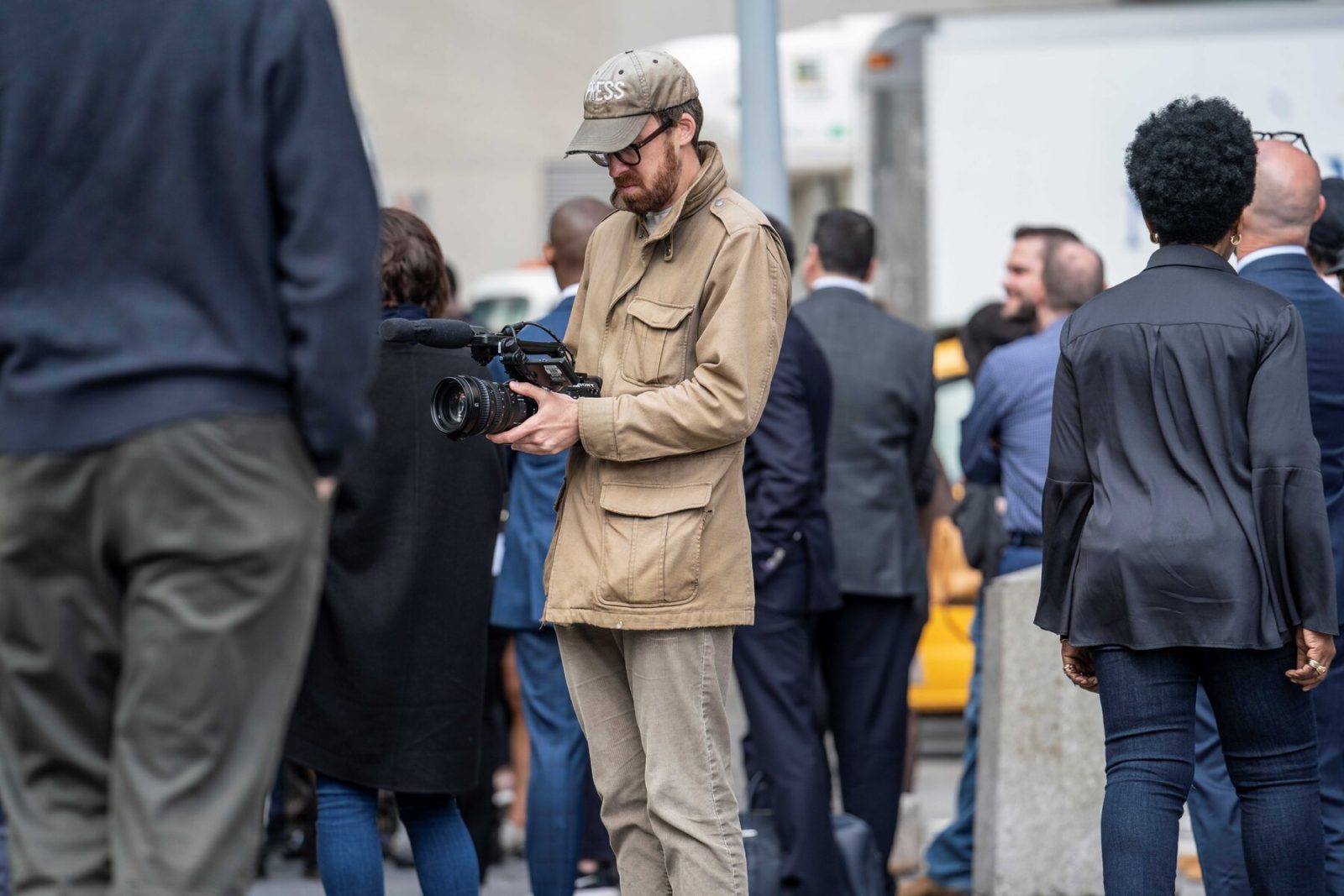 How To with John Wilson (courtesy of Showmax)

‘How to with John Wilson’ is a manic montage of New York people-watching and narrated comedy that largely defies explanation, but is decidedly hilarious.

How to with John Wilson is almost impossible to pin down, and any succinct description of it would sound wholeheartedly whack. The next 1,000-odd words aim at convincing you to watch it anyway.

Netflix subscribers may recently have seen Martin Scorsese’s comedy docuseries Pretend it’s a City, in which humorist Fran Lebowitz waxes lyrical about her love-hate relationship with New York. How to with John Wilson is a bit like that, but much, much more outlandish.

Wilson films the weirdest and wackiest of New York City life on a handheld camera, all the while juxtaposing his uncontextualised scrapbooked footage with mock-profound narration, and apparently teaching us valuable life skills.

“Stick with me,” he proclaims (with delightfully half-hearted confidence) “and I’ll help you try to solve problems that, uh, you didn’t… even know you had.”

Each episode ostensibly sets out to provide a tutorial on how to do something: How To Improve Your Memory or How To Cook The Perfect Risotto, but these titles have mostly nothing to do with the ridiculous and occasionally earnest places Wilson ends up taking us too.

There is practically no discernable point of reference guiding his gushing waterfall of consciousness, but bafflingly, it still works. The chaos of his rambling tangents of curiosity and mania actually seems to make the show more watchable. His attitude to life is: “If you can’t make it onto the subway, just open up the closest door to you and hope that there’s something better on the other side.”

Three minutes into the first episode, How To Make Small Talk, we find ourselves interviewing a hardcore skinhead who catfishes child predators for a living by posing as a minor looking for sex online. Wilson matter-of-factly justifies this sudden change of focus as if it’s perfectly reasonable, saying: “Because his job involves being engaged for long periods of time, I thought he might have some insights into sustaining friendly conversation.”

The second episode, How To Put Up Scaffolding, which tackles what seems like a hilariously mundane topic, turns out to be pretty informative about the (surprisingly interesting) history of scaffolding in New York. After exploring the different ways in which people have used scaffolding, Wilson comments that “it doesn’t take much to transform such a common object into something extraordinary”.

That quote applies beautifully to the show itself: an extraordinary docuseries made up of footage like a construction worker grabbing his balls, a man dressed as a hosepipe, a cat vomiting on the carpet, and practically anything else you can think of; all woven into ironically curated montages of affectionate feigned misanthropy, accompanied by crudely edited-in sound effects and a sarcastic classical score.

Wilson’s best attempt at describing the show himself is “Planet Earth for New York City”, but he adds that it’s difficult to know whether that’s a compliment to himself or an insult to David Attenborough. Even if the staccato, unpolished insanity of Wilson’s idiosyncratic comedy is not for you, the show’s farcical ethnographic spectacle should still be fascinating. People are strange, and some of the strangest of us live in New York.

New York stands out for its success and its daily hustle, and the reach of its reputation has turned it into a cultural melting pot. You can find anyone in the world in New York. Any nationality, any preoccupation, any persuasion.

Because of this, it’s sometimes aggrandized as “The Capital Of The World”, and while this hyperbolic self-given nickname is born partly of arrogance, ignorance and self-obsession, New York City is undeniably a fun case study of some of the odd things you find when you jam all kinds of people from all kinds of places into cramped urban spaces.

Having previously worked as a private investigator, Wilson is obsessed with following people around and capturing quirky moments. He’s insatiably occupied with human behaviour and cultural contradictions. With a few pointed questions, he goads all sorts of kooky, lovable and despicable characters into unpacking their own absurdities.

Wilson is pretty kooky himself, and a highly atypical TV host. He has a nasal monotone voice with an offbeat stumbling rhythm. He doesn’t smooth out the audio or remove his mumbling ums and uhs. He lisps and stutters and clears his throat, and it just adds to the dorky charm of his stereotypical Woody Allenesque New Yorker’s neuroticism. It’s difficult to gauge how much of his obsessive socially awkward neurosis is real and how much is put on to be funny.

Wilson brandishes his anxious, over-analytical fixation with social interaction to carve up relatable unspoken experiences. In the episode How To Split The Check, he gives an hilariously accurate description of how a restaurant date with friends can deteriorate into frenzy, making it impossible to split the cheque; a delectable nugget of social commentary every bit as brilliant as James Corden’s viral sketch from Gavin and Stacey about sharing Indian food with your family.

Wilson’s insights aren’t always so jocular. In every episode, usually near the end, he spares a minute or two to ruminate with sincerity about issues as serious as the ways in which societal expectations isolate people and perpetuate selfishness, or how urban architecture is designed to manipulate behaviour in public spaces and target the homeless.

Most of the episode, How To Cover Your Furniture, is spent poking fun at people’s obsession with preserving their stuff, but halfway through, Wilson gets philosophical about material attachment and the nature of decay.

“Maybe being too precious about an object can actually just make you enjoy it less and create a low-simmering anxiety that you can never escape.”

Of course, just when he’s got you convinced that he’s deep, he veers left field and starts interviewing an anti-circumcision fanatic who invents homemade machines to “restore foreskins” and writes music about circumcision. Now’s a good time to warn that while most of the show is only mildly PG, there are brief moments of wild graphic vulgarity. More than once, your screen will be attacked by relevant but jarringly explicit full-frontal male nudity. This is definitely not appropriate for young or sensitive viewers.

Wilson sometimes employs candid shock comedy, the likes of Sascha Baron Cohen or Eric André. These scenes are often filmed covertly, so they’re particularly muffled and off-kilter, but don’t expect fancy cinematography at the best of times – even the planned shots are filmed on Wilson’s handheld camera.

There’s an intimacy to the low-budget medium of the series and Wilson’s casual, meandering tone that gives it a relaxing quality. The 20-something-minute episodes feel quick and easy to watch while somehow encompassing entire journeys of erratic madness, education and deep thought.

All this footage of bustling pre-coronavirus life seems otherworldly, highlighting just how bizarre it is. Coronavirus hit the US during the filming of the last episode, so among many other entirely unrelated things, Wilson playfully and poignantly captures the panic and confusion of early 2020.

HBO has renewed the show for another season, set to air in October 2021. Who knows what insightful and amusingly useless advice Wilson will have taken from everything that has happened since he finished filming season one, or even whether the second season will resemble the first at all. Whatever it is, it’s a safe bet that it’s worth looking forward to. DM/ML

How to with John Wilson is available in South Africa on Showmax.
You can contact This Weekend We’re Watching via [email protected]

Loss in the pandemic: when a loved one dies, being cut off from the grieving process can make things harder

A linguistic and visual tour of the Koup Karoo

On love across time and the Irish Sea