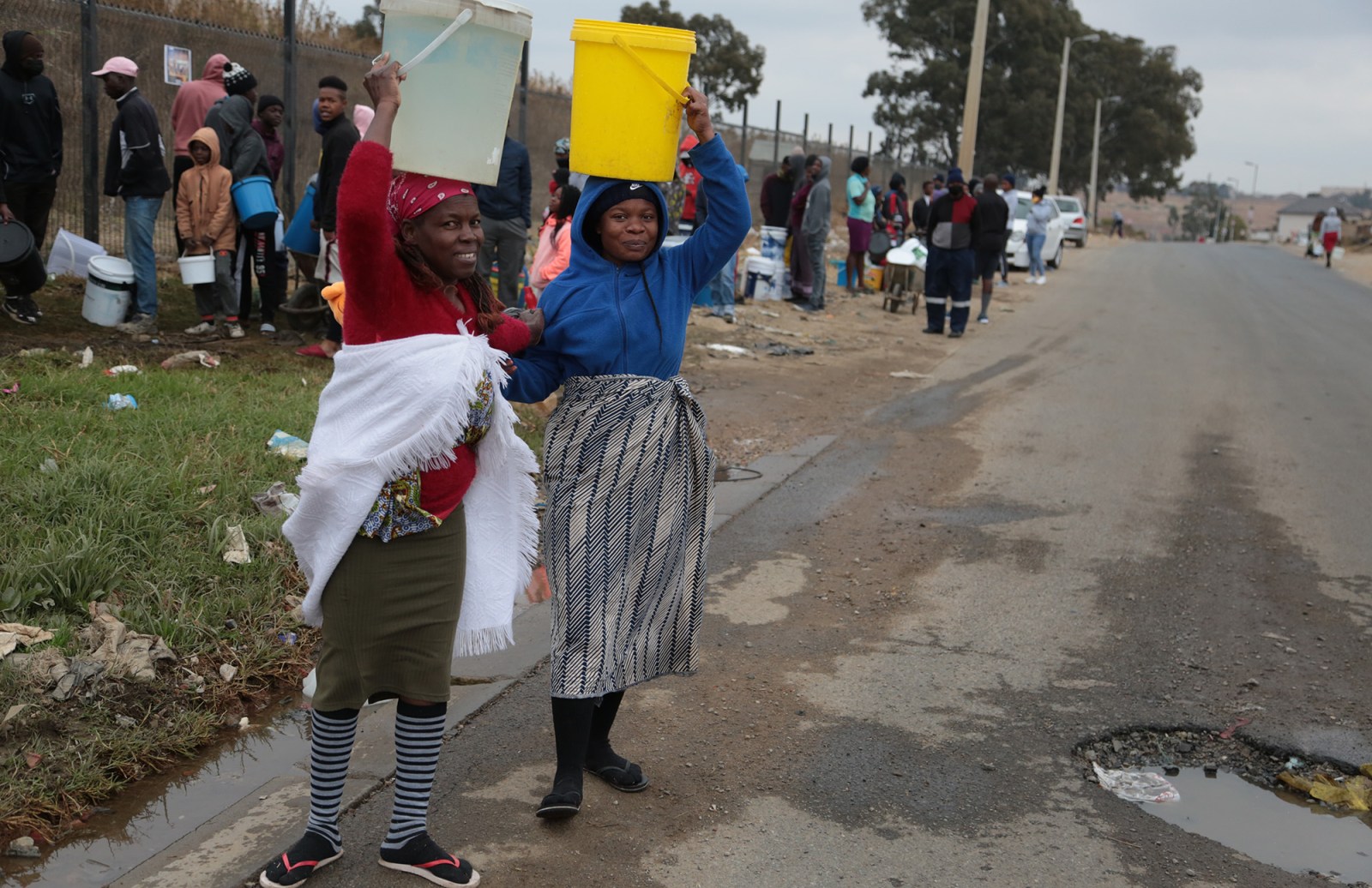 Resident of Klipfontein in Midrand fetch water from a hydrant. Reservoirs ran dry after an explosion at the Palmiet Booster Pumping Station in Alberton on 4 July. (Photo: Felix Dlangamandla / Daily Maverick)

Three motors used to run pumps were damaged in a pump station explosion, and ‘as a result of that we couldn’t pump water to our customers at 100% capacity’, says Rand Water.

Rand Water is confident it will restore full water supplies to consumers by Sunday, 11 July after an explosion at its Palmiet Booster Pumping Station in Alberton on 4 July.

Three motors used to run pumps were damaged in the explosion, and “as a result of that we couldn’t pump water to our customers at 100% capacity”, said Mohale. “We went down to 55%, but we managed to repair one motor on Monday.”

Repairs to the motor raised the pumping capacity from 55% to 70%.

Mohale said that on Wednesday, they managed to recover about 200 million litres to augment the pumping system itself. This recovery amounts to a third of the total volume of water needed to supply customers on a daily basis.

“Recovery of this load has also assisted in stabilising parts of the system and improving supply,” said Mohale.

In a statement on Thursday, Rand Water said it supplies 4,300 million litres of water a day across four provinces. The entity said the current supply stood at 4,100 million litres.

When asked why areas such as Soshanguve in Pretoria still had no water, Mohale said the Pretoria areas of Mabopane, Garankuwa and Laudium were also affected.

Information received by Daily Maverick from Soshanguve suggested that there had been no water in Soshanguve since Monday evening due to scheduled water outages and that there was no supply of water tanks. The Tshwane Municipality could not be reached for comment.

Ekurhuleni Municipality spokesperson Zweli Dlamini said that water tankers would deliver water to the affected areas until water supplies were fully restored. The water supply to some communities in Ekurhuleni had already been restored.

Rand Water said communities across Gauteng had been affected by the water cuts.

Gauteng’s water infrastructure collapse has often been in the news. In May, Daily Maverick reported how Johannesburg’s inadequate investment in servicing infrastructure had led to water shedding in some of the city’s key hospitals.

Mohale said that all operations should resume in a few days.

“We are confident that by Sunday, 11 July, we will have completed repairing all the motors and fully restored pumping capacity. By Sunday it will be all systems go.”

In its draft National Water Resource Strategy, the 2030 Water Resources Group projects that there will be a 17% deficit between water supply and demand by 2030. DM