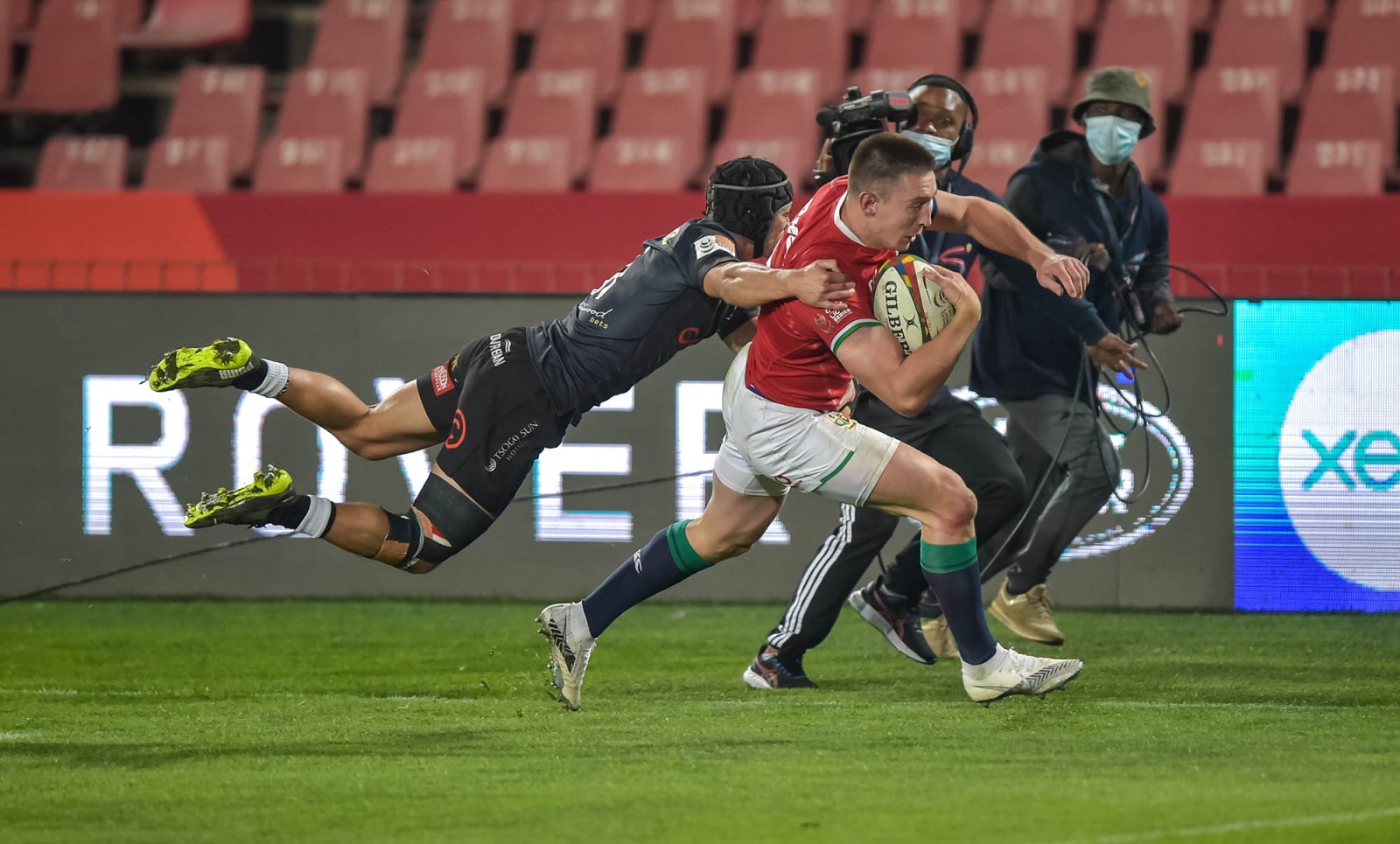 Thaakir Abrahams of the Cell C Sharks and Josh Adams of the British & Irish Lions during the Tour match at Emirates Airline Park on 7 July 2021 in Johannesburg. (Photo: Christiaan Kotze / Gallo Images)

The Sharks will play against the British & Irish Lions for a second time in four days after stepping in as late replacements for the Bulls.

You have to go back 111 years to when the British & Irish Lions last played back-to-back matches against the same provincial opposition on a tour of one of the three Southern Hemisphere giants – something which will happen again this weekend.

A once-in-a-century pandemic has forced a once-in-a-hundred-years occurrence, which is yet another symbol of the crisis management that the organisers of the 2021 Lions have been forced into.

The Sharks, who lost 54-7 to the touring Lions at Ellis Park on Wednesday, will step into the breach once again to face the Lions at Loftus this weekend.

In 1910 the tourists, not called the Lions then, but Britain, and playing in blue jerseys as opposed to their now familiar red jumper, met Border in East London and then King William’s Town (now Qonce). It was the first time all four home unions – England, Ireland, Wales and Scotland – had collectively supported the tour.

Britain beat Border 30-10 in the first encounter in East London, which would have been well over 60 points by today’s scoring system. Four days later the tourists were held to a 13-13 draw in the return clash in King William’s Town.

The Sharks will be hoping that history repeats itself. If the men from Durban could somehow eke out a draw against the Lions after the eight-try mauling they suffered this week, it would be one of the great turnarounds in modern sport.

Sharks coach Sean Everitt was surprisingly upbeat after the eight-try hammering his side took. He has no option but to look on the bright side, and if there is one statistic to cling to, it’s that the Lions missed 26 tackles. They weren’t made to pay though, because the Sharks invariably sullied their half breaks with a mistake within seconds.

“We’re a bit disappointed in the error rate of some of the individuals in the team, but, in saying that, I think there was a lot of good to take out of the game,” Everitt said.

“We did put them under pressure but we just don’t seem to have enough patience with the ball and we have to respect the ball. At this level, playing against international rugby players, there will be consequences for the mistakes you make.”

The Sharks have been isolating as a group in a secure bio-bubble, which made them the most attractive substitute opponent at short notice. Some consideration had been given to playing an extra SA “A” game this weekend, using players currently in the 46-man Springbok bubble.

Five players and seven members of management are Covid positive (as per the last update from the camp), although unofficially Daily Maverick has learned from a source that several more players are positive.

While it sounds alarming, it is actually not surprising given the aggressive nature of the Delta variant and the close living quarters of the squad. That situation, coupled with no training this week due to isolation protocols, made any thought of an extra SA “A” clash unworkable.

There is so much uncertainty in the Bok camp due to positive Covid results that next week’s scheduled game between the Lions and SA “A” at Cape Town Stadium on 14 July might be swapped with the match against the Stormers.

The Stormers were due to play the British & Irish Lions on 17 July, but they could now fill in the 14 July slot, with SA “A” playing three days later to allow players to complete their isolation protocols.

“The choice of the Sharks was dictated by the fact that they have been in a bubble, have returned negative tests throughout and were prepared to take on the fixture,” said Jurie Roux, CEO of SA Rugby.

“No other team in the country could meet those conditions right now – without going into a five-day lockdown. It is not an ideal situation, but Covid-19 has made sure that we do not live in an ideal world.”

The change has meant that the Sharks’ match against the Lions in the Currie Cup on Saturday has been cancelled, with a decision on the points allocation to be confirmed.

“We’re very grateful to the Sharks for agreeing to play us again this Saturday at Loftus Versfeld,” said Ben Calveley, managing director of the British & Irish Lions.

“We have further Covid-19 testing scheduled for today and tomorrow. The results of those tests will determine whether we will be able to fulfil this fixture, but, as it stands, we are optimistic.”

Lions not all fully vaccinated

Calveley added at a later media conference: “They [the Sharks] are the only side in the country that is able to meet the really strict protocols that exist – that is because they have already been living in a bubble. In terms of playing that number of games in a short period of time, that applies to us as well.”

Calveley confirmed that not all the Lions players had been fully vaccinated.

“I think it’s wrong for anyone to think that vaccination is some sort of universal panacea. I’m afraid it’s not,” Calveley said. “So, we have an approach which is multilayered where, as well as having a majority of the party being vaccinated, we are also exhibiting all of the right behaviours that I’ve spoken about before.

“The hotel staff don’t go home every evening and reintegrate the next day. They live onsite here as well, and actually there are very few hotel staff. Our bubble is about as secure as it can be.

“We think we’ve got a very, very robust set of protocols in place that will keep us as safe as they possibly can.” DM