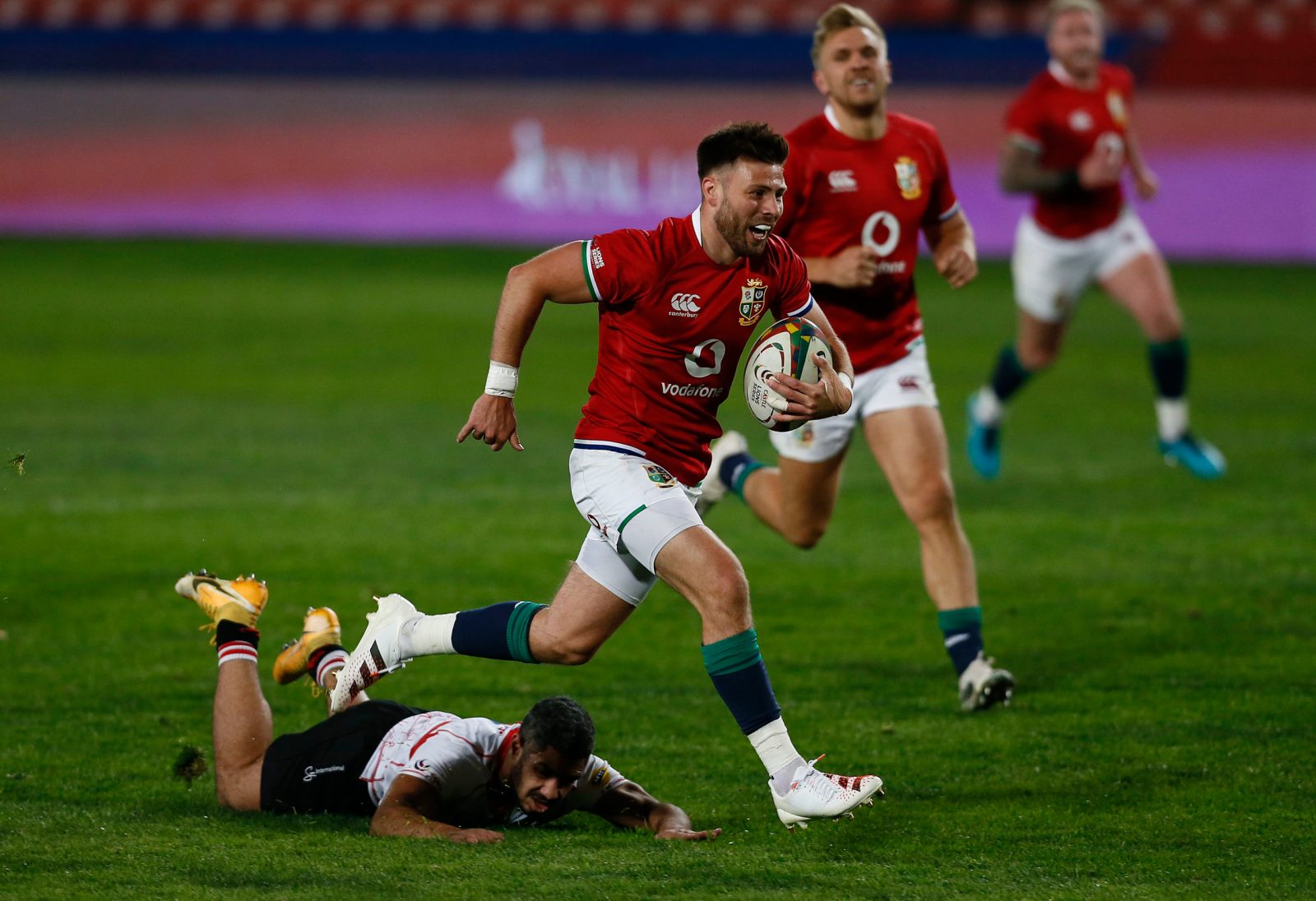 Ali Price of British and Irish Lions in action with Manuel Rass of Emirates Lions during their clash on Saturday 3 July 2021 at Emirates Airline Park in Johannesburg. (Photo: Felix Dlangamandlas/Daily Maverick)

The British & Irish Lions’ fraught tour in South African continued with a clinical 54-7 win over the Sharks on Wednesday, which ironically added more questions about the value of the entire exercise.

The British & Irish Lions have been more rigorously tested by nurses brandishing PCR swabs than they have on the field in their first two games of the 2021 South African tour.

The Sharks and local Lions clubs have rolled over so tamely, they should seriously reconsider renaming their franchises something more gently appropriate. The gulf in class between the British & Irish Lions’ seasoned Test campaigners and two of South Africa’s supposed top four teams has been stark. And frankly, embarrassing.

In 2009 the Lions struggled to two-point wins over Western Province and the Cheetahs, and even a makeshift Royal XV nearly upset the visitors in their opening match of that tour. The Lions drew against the Emerging Boks and lost the Test series 2-1 against the Springboks. And like now, all South Africa’s franchises were missing their Springboks in 2009.

The last 10-match trip through South Africa felt like a contest from beginning to end. It was the Lions against an entire nation, as it should be and as it always has been.

But the 2021 tour, thanks to Covid has been stripped of atmosphere and soul. And thanks to the opposition the tourists have encountered, it is quickly being stripped of meaning as well.

The Lions have scored 16 tries and 110 points in two matches. They will face the Sharks at Ellis Park again on Saturday, in a hastily rearranged fixture after the Bulls returned a host of positive Covid results and their fixture set for 10 July was cancelled.

The Lions’ next scheduled provincial opponents after Sharks part deux, are the Stormers.

The Cape side just lost a Currie Cup match to Griquas and their most experienced remaining prop in Ali Vermaak to a long-term injury. They won’t be able to field a PRO14/Super Rugby standard team against the Lions and are facing the possibility of a heavy defeat.

The inflated scores are the result of performances that have exposed the Joburg Lions and the Sharks technically. Both sides lacked line speed and intensity, their set-piece basics fell apart and their defensive structure crumbled under the slightest pressure.

These are all high-performance aspects that should be up to speed regardless of the personnel wearing the jerseys. Sure, missing seven Springboks is massive but the technical and tactical nous has been well below par and is a wake-up call for these franchises before they head into Europe for the newly formed United Rugby Championship (URC).

In tours past, the Test matches were the icing, but the provincial games were the cake. Legends were made in games between passionate provincial players and the Lions, and a rare victory would go down in folklore.

The professional era is partly to blame for the shift in dynamic, but make no mistake that matches between provincial teams and the Lions should still be compelling contests. What we have seen in the first week of an already truncated 2021 tour has been neither compelling nor a contest.

In 2017 in New Zealand, the Lions lost to the Blues and Highlanders, drew with the Hurricanes and their biggest margin of victory was 28 points over the Chiefs. They still managed to draw the Test series 1-1 against the All Blacks.

Four years earlier in Australia, the Lions lost to the Brumbies coached by Jake White. White, currently Bulls coach, considers that one of his top achievements as a coach. This from a man who has won a World Cup.

Unfortunately, White’s Bulls might not have a chance to emulate the 2013 Brumbies, after four players and one member of the Bulls staff tested positive during the week.

That match might be rescheduled but it’s likely that, due to Covid isolating protocols, the Bulls might not be at full strength and given that the Lions currently have 12 members of their entourage in isolation, they might not be able to select the team they want.

A tour that is already creaking and buckling under the strain of the third wave of the Covid-19 pandemic sweeping the country, needs some compelling rugby to provide some justification for its existence.

After two matches, the validity of the entire exercise is quickly being eroded. If South Africa can’t even put out semi-competitive teams, is the expense and angst worth it?

The other growing issue, given the seeming inevitability of the Delta Covid variant infiltrating the various bio-bubbles, is that the Lions and the Boks might not be able to field the players they planned because of isolation or infection.

Injuries are part of any rugby match and force changes. But there could conceivably be a situation where one, or both teams won’t have access to more than half the players they wanted to choose, which would seriously undermine the integrity of the contest.

The Lions already had the slightly farcical situation of going into the first Sharks game with seven forwards and only one back on the bench because of Covid isolation protocols. Scotland flank Hamish Watson was essentially the reserve scrumhalf.

Had regular scrumhalf Ali Price been injured in the first minute, it might have had a bigger impact. Fortunately, Price wasn’t injured, and the Sharks were so abject that it might not have mattered even if Watson had been asked to play halfback. But in a Test match that would be disastrous.

This tour is already short on credibility due to the pandemic raging through Gauteng and spiking in other parts of the country too. For it to claw back some standing, it needs matches to be contests and for meaning to be added to the games, otherwise it will forever be viewed as an exercise in folly and hubris. DM