Labour market: Ters payment period should be extended if job losses are to be minimised 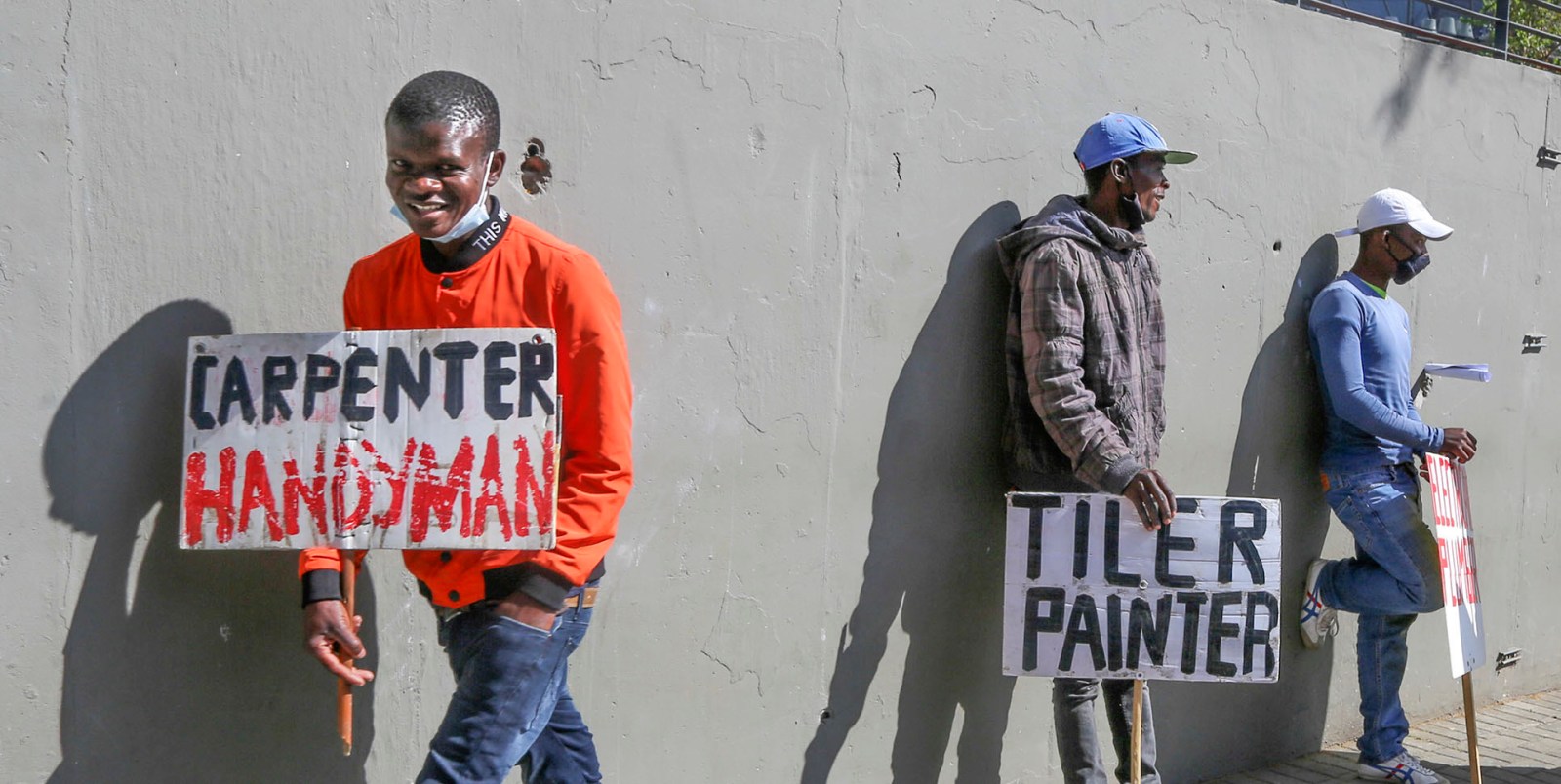 Ters payments provided an important source of income relief for many vulnerable workers during the lockdown periods, but its limits and administrative inefficiencies threaten the recovery of the South African labour market.

Job retention policy — which aims to preserve jobs by alleviating labour costs and supporting the incomes of workers at companies experiencing temporary slowdowns — has served as one of the main tools used across the world to mitigate job losses due to the Covid-19 pandemic. These policies help employers to retain workers and avoid the potentially costly process of rehiring and retraining as economic activity picks up again.

By May 2020, this type of active labour market policy already supported 10 times as many jobs as during the 2008/09 financial crisis. Today, about one year later, more than 800 active labour market policies are in place in nearly 180 countries as a response to the pandemic. Most countries (52%) have implemented the most prevalent form of job retention policy, namely wage subsidies.

In South Africa, this policy serves as the core component of the government’s economic response, the Temporary Employer-Employee Relief Scheme (Ters), which aims to prevent retrenchments by providing wage support to affected employers.

Benefits to almost half of workers

Ters was the largest Unemployment Insurance Fund (UIF) component paid out during the lockdown period: by March 2021, nearly R59-billion had been dispensed to 5.4 million workers. That is equivalent to nearly half of all formal sector workers or two-thirds of all UIF contributors.

Initially, the policy was only available for three months to UIF contributors (which excluded half of all workers), but later the period was extended and eligibility expanded to include any worker who could prove an existing employment relationship.

Little is understood about which workers have benefited from Ters, how this has varied over time, and importantly, whether the policy has been successful in achieving its primary aim of minimising job losses. In our recent research, we use newly available data (all five waves of the National Income Dynamics Study – Coronavirus Rapid Mobile (Nids-Cram survey) to answer these questions for the period April 2020, when the policy was introduced, to nearly one year later in March 2021.

What was the coverage? We found that Ters reached the highest number of workers at the onset of the programme. That amounted to 1.8 million workers in April 2020 and two million in June 2020. Many workers continued to benefit throughout the year as the economy reopened, but so far relatively few have benefited in 2021. This is likely due to payment backlogs, but it is also because of recovering economic activity (up to March) and important changes in the policy’s eligibility criteria.

In terms of benefits, we estimate that recipient workers got about R4,100 per month on average in the form of benefits, but this is a fairly rough estimate.

Who benefited? Although it was mostly men (representing 60%-65% of recipients), individuals from several vulnerable groups became more likely to receive Ters benefits as the programme evolved. The share of African/black individuals, lower-wage workers and less-skilled individuals was more prevalent among the March 2021 recipients.

Furthermore, an overwhelming majority of recipients (between 81% and 94%) was unable to work from home at all, suggesting that Ters succeeded in providing support to establishments that were struggling to continue operations.

Are these high receipt rates driven by relatively high employment shares? Generally not, as illustrated in the figure below. Most of the above groups, as well as workers who are semi-skilled, work in the secondary sector, and (expectedly) those with a written contract, lie to the left of the diagonal (their Ters receipt share is greater than their employment share). 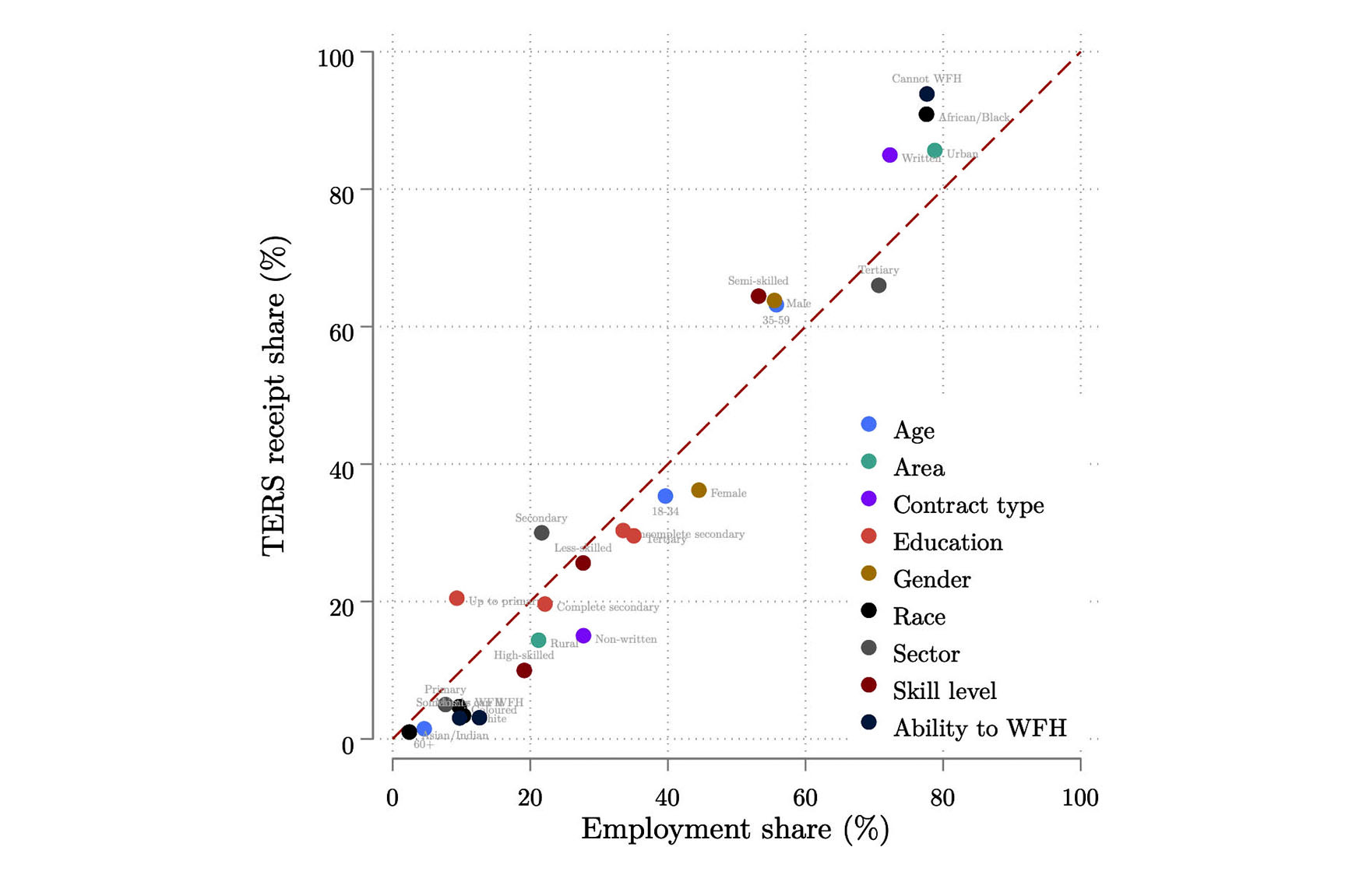 Although Ters benefits are higher in absolute terms for higher-wage workers, we find that lower-wage workers benefited more in relative terms. This is intentional, due to the policy’s progressive sliding-scale design as well as its lower and upper “capped” benefit amounts.

For example, the average benefit among the poorest 20% of workers was estimated at R3,500 per month, and about R6,500 per month among the richest 20%. Relative to the groups’ average pre-pandemic wages, however, the former benefit is more than seven times higher while the latter is equivalent to just 25%.

Last, we have found evidence that receiving Ters payments is significantly associated with job retention, but only during the first few months of the programme. After accounting for characteristic differences between recipients and non-recipients, we estimate that getting Ters payments in April 2020 was associated with an 18.1 percentage point increase in the probability of remaining employed in the same job in June 2020.

However, there is no such relationship for the remainder of the lockdown period. This suggests that Ters may indeed have succeeded in its primary aim of minimising job loss, but only when lockdown regulations were most stringent and before important eligibility criteria changes were implemented.

A threat to recovery

Our findings suggest that Ters provided an important source of income relief for many vulnerable workers, but that its limits and administrative inefficiencies threaten labour market recovery. Following the recently imposed Level 4 regulations, the economic activity of several industries is significantly restricted yet, at the time of writing, no economic relief measures have been announced.

Policymakers should consider extending Ters beyond the October 2020 to March 2021 claim period. The good news is that, at the time of this writing, such an extension is on the cards, but this still needs to be approved by the Cabinet and the details disclosed.

Of course, support needs to be prioritised for industries whose activities remain legally restricted, such as the hospitality, liquor and tourism industries. To this end, to distinguish the eligible from the ineligible, applicants have needed to specify their relevant Standard Industrial Classification (SIC) code which the system verifies with the South African Revenue Service.

Curse of the codes

However, many applicants are denied support due to an incorrect, outdated or missing code. Workers who are unable to update their SIC code are directed to an appeals process, which has been regarded as inefficient.

In addition to delayed payments and poor communication on the part of the Department of Employment and Labour, policymakers ought to consider that the use of codes to determine eligibility and its accompanying administrative burden may jeopardise the welfare of vulnerable workers.

Such denied or delayed support for vulnerable workers reduces the likelihood of them retaining their jobs, ultimately threatening the recovery of the labour market. DM/MC