From despair to where? Portraits of stateless survival in Cape Town’s unofficial refugee camp 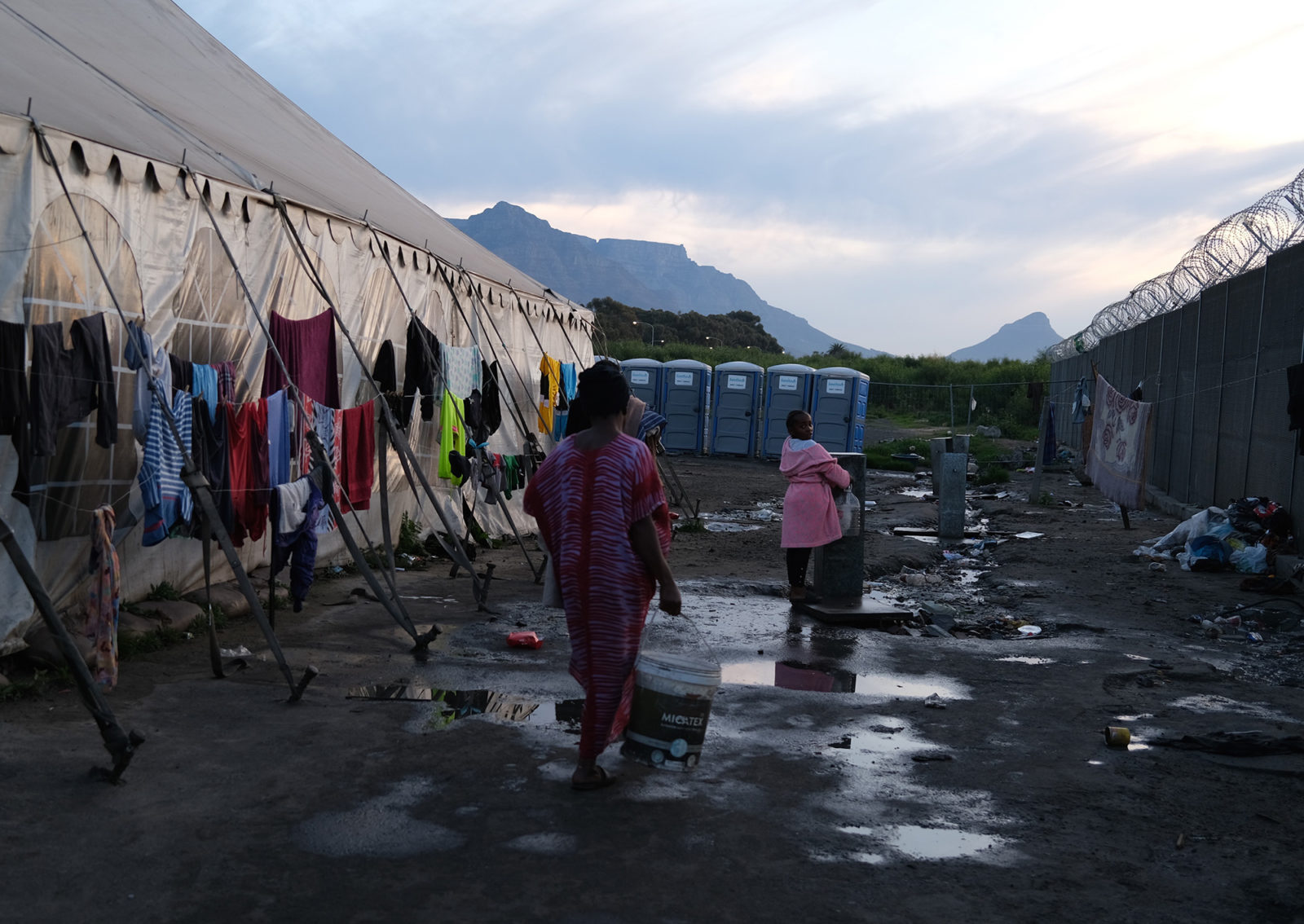 Officially, there are no refugee camps in South Africa, yet about 1,500 refugees have been collectively allocated temporary shelter at Wingfield (pictured) and Paint City in Cape Town. (Photo: Ryan Jacobs)

Two years have passed since a protest against xenophobic violence and struggles accessing documents began in Cape Town. Now, roughly 500 displaced migrants have been languishing in a make-shift temporary camp in Wingfield while the problems they protested against persist.

What started as a protest outside the United Nations High Commissioner for Refugees (UNHCR) offices in Cape Town, and eventually the Central Methodist Church in Greenmarket Square, has left roughly 500 people stranded in a circus tent between Wingfield Military Base and a cemetery.

Since October 2019, the group has protested against xenophobic violence and challenges acquiring legal documents such as asylum seeker and refugee status papers, birth certificates and permanent residency permits. Their ultimate demand was to be resettled to Canada.

When the Covid-19 pandemic struck, the group — which had split into two factions — was moved from the CBD to separate, temporary shelters at Paint City and a circus tent at Wingfield — roughly 1,500 people in total.

Officially, South Africa does not have refugee camps. But people like *Mukanda live in limbo at Wingfield. Mukando has waited 16 years for a Refugee Identity Document from The Department Of Home Affairs. Prior to the expiration of his Asylum seeker status, he was given extensions of one week at a time from the Refugee Reception Office (RRO) in Pretoria, 1461km away from his residence and place of work in Cape Town. He has lived in South Africa for more than 20 years.

The RRO in Cape Town was closed in 2012. A 2017 Supreme Court of Appeal (SCA) ruling ordered the Department of Home Affairs to reopen the office by 31 May 2018. This was not done. In a recent matter brought by Lawyer for Human Rights, judge Alma de Wet at the Western Cape high court ruled that Home Affairs set in motion the reopening of the office and file monthly progress reports to the court.

*Peter from Langebaan fled to South Africa from DRC with his mother and older sister 15 years ago, shortly after his first birthday. Peter has played rugby since he was in primary school and hopes to play professionally one day. He doesn’t have permanent residency and if his refugee status was revoked, he could be deported to a country he has never known.

Happiness, 14-month-old, was born into the camp and is one of the youngest residents. Without a birth certificate, she is stateless.

Her mother Verro has lived in South Africa for 13 years after fleeing from DRC. The country has high instances of sexual violence and up to 5.4 million people died between 1998 and 2008 in the war-torn nation, making it the bloodiest conflict since World War 2.

These are just three stories among those of more than 266,000 people in South Africa who have fled conflict from other parts of the continent and beyond. The majority are struggling to access refugee documents.

According to the Refugee Act of 1998, a refugee is “entitled to formal written recognition of refugee status”, “enjoys full legal protection”, access to “basic health services, basic primary education”,  identity and travel documents, the right to seek employment and the right to apply for an immigration permit and residency after five years in the country.

But backlogs and hurdles in the asylum seeker system has made realising the protections in the Refugee Act nearly impossible.

Initiatives like the Backlog Project funded with R147-million from the UNHCR, are in place to process more than 153,000 asylum seekers and refugee applications. The project is expected to take four years.

The Wingfield shelter, which was established under Disaster Management Regulations, had been earmarked for closure a few times over this year, with numerous extended deadlines.

When asked whether services had been formally withdrawn from the site and how long the tent would remain, the City of Cape Town did not respond to our queries but redirected Daily Maverick to the Department of Home Affairs which also failed to respond.

Parliament’s Home Affairs Committee had said in May that residents at the shelter had two options: to either be reintegrated into local communities or accept an offer of voluntary repatriation to their countries of origin.

Those reintegrating were offered three months’ rental and food supply.

While it appears a few have taken the UNHCR’s three-month offer of around R4,000 per family and about R1,500 for single people, their future remains uncertain. Some do not see the point in taking this offer with there being up to ten people in families. Some are considering voluntary repatriation while others seem resigned to despair after two years of no progress.

Some questioned where they must go when the rent stipend offers few options other than renting rooms in the same areas they fled from, due to danger and fear of xenophobic attacks. And without documents, they cannot work and support themselves further. When asked what they would do if the City of Cape Town removed the tent and forcibly removed the group, some said they would “die here”.

At the end of July, funding for the circus tent, two dozen port-a-loos and three water points will expire. This is in line with his Department’s policy and the City Of Cape Town having no obligation to fund the camp further.  Additional reporting by Sandisiwe Shoba. DM

*Full names have not been used to protect the interviewees.

Ryan Jacobs is a freelance documentary photographer. He took these images over a period of a month, before the lockdown Level 4 restrictions were in place.