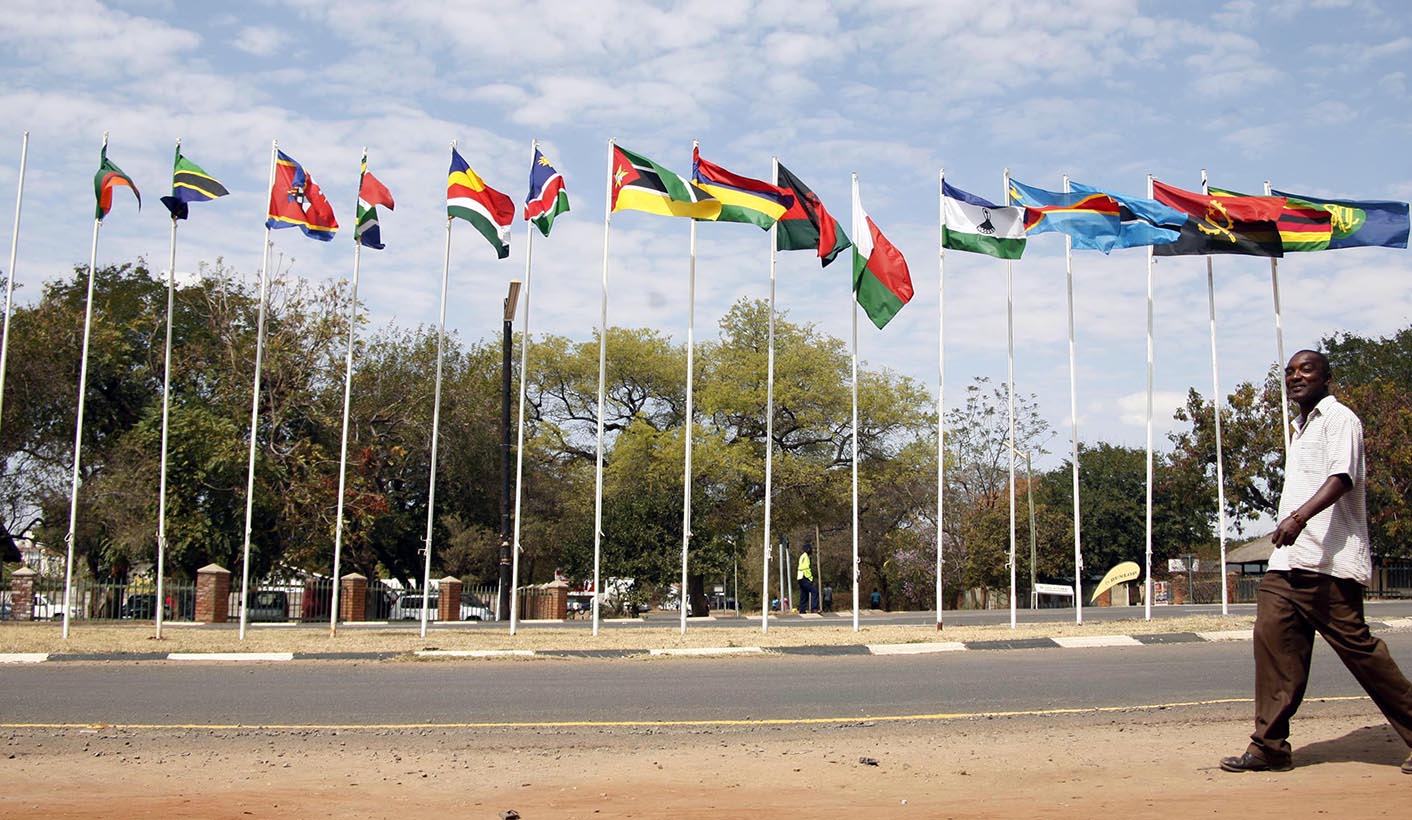 A regional symposium convened by the SADC Parliamentary Forum for SADC parliaments has revealed pitfalls in the road towards the full realisation of the African Continental Free Trade Area. Photo: A man walks past the flags of the member states in the 34th Ordinary SADC Summit of Heads of State and Government

The African Continental Free Trade Area agreement came into force in January and is anticipated to be a vehicle for Africa’s economic transformation, but it will not work for the continent by default.

Moses Magadza is a freelance journalist based in Windhoek, Namibia, and a PhD student with research interests in the framing of key populations by the media. He won the SADC Media Award in 2008.

A regional symposium convened by the Southern African Development Community Parliamentary Forum (SADC PF) for SADC parliaments from 25 to 27 June 2021 has revealed pitfalls in the road towards the full realisation of the African Continental Free Trade Area (AfCFTA) and galvanised parliamentary action as the region angles for rich pickings from the trade agreement.

The 49th plenary assembly session, held virtually and hosted by Botswana under the theme “Leveraging AfCFTA for post-Covid economic recovery in southern Africa: the role of the SADC Parliamentary Forum and national parliaments”, drew the participation of 13 national parliaments from the SADC region.

The AfCFTA agreement was signed in 2018. It came into force in January this year. Its newly appointed secretary-general, South African Wamkele Mene, said with a membership of 55 countries, AfCFTA was poised to be “the largest free trade area in the world, covering a market of 1.3 billion people with a combined gross domestic product of $3.4-trillion.

“The overall objective of AfCFTA is to create a single continental market for goods and services, with free movement of business people and investments, paving the way for accelerating the establishment of the continent’s first-ever customs union,” Mene said.

Kgafela said that AfCFTA was “anticipated to be a vehicle for Africa’s economic transformation through facilitation of movement of goods and services, competition, investment and intellectual property”. However, he warned that it would not work for the continent by default and called for active involvement of the regional economic communities, including SADC and the region’s parliamentarians.

On the role of SADC PF, Kgafela said it would include “advocating for inclusion of AfCFTA implementation in national laws, national development plans and all other legislation existing in the country [as well as] awareness-raising and amplifying citizen’s voices in the AfCFTA processes”.

Sibanda flagged challenges that he said could make or break the free trade area. These include intra-Africa trade, which is low at about 19%; low levels of export diversification; poor connectivity infrastructure; low macroeconomic integration convergence; weak participation of small to medium enterprises; and low gender parity.

He urged SADC parliamentarians to support the SADC Industrialisation Strategy and Roadmap 2015–2063, “which seeks to achieve economic and technological transformation in the region, through among others, promotion of investments and partnership with the private sector”. He said the SADC Regional Infrastructure Investment Master Plan was being implemented to facilitate the design and construction of critical infrastructure projects.

Oiling the wheels of commerce

Butale described AfCFTA as the “fastest ratified agreement in the history of the African Union” and urged SADC and other regional economic communities to create a conducive environment for it to succeed. He suggested simplifying and agreeing to customs procedures that were predictable, transparent and harmonised across borders to make it easier for traders to move cargo from one part of the continent to the other.

On the pharmaceutical industry, he said Covid-19 had exposed gaps within Africa and exhorted MPs to fight “monopolistic and protectionist patent laws” to facilitate the production of generic medicines.

SACU’s Elago also welcomed AfCFTA and said it could significantly alter the African status quo of low intra-trade. “It is a timely policy imperative and although it is not a panacea, it can be a serious game-changer.” SACU had adopted industrialisation as an overarching objective with a focus on regional value chains, export promotion and investment, trade facilitation and logistics, and had identified agro-processing, pharmaceuticals and chemicals as priority sectors.

She said it was imperative that Africa became “self-sufficient” in the pharmaceutical sector and welcomed the African Development Bank’s decision to support Africa’s pharmaceutical industry.

Mozambican MP Carlos Moreira Vasco said Covid-19-related measures imposed by some countries to contain the pandemic were posing “severe obstacles towards the full operationalisation of the goal of a single portal of circulation of goods and services and investments on the continent”.

Mozambique had initiated a study on the impact of ratifying and implementing AfCFTA on its economy before ratification, but was committed to the agreement, he said.

Vasco called for laws that would “facilitate a successful implementation of AfCFTA as well as policies that will allow innovation and digitalisation”.

Home-grown vaccine and other solutions

The speaker of the parliament of Zimbabwe,  Jacob Francis Mudenda, said Covid-19 had to be defeated if the implementation of AfCFTA was to succeed. “We cannot implement AfCFTA if Africa is sick and suffering from Covid-19,” he said. He challenged the Africa Centres for Disease Control and Prevention to “come up with our own brand of vaccine rather than crying for patents from other countries”.

Mudenda called, also, for the development of Africa’s indigenous medicines “that are being used quietly, but are not being investigated for their efficacy”.

He advocated for legal reforms and harmonisation and argued that AfCFTA could not succeed in an environment replete with “disjointed” laws. “Our customs and immigration laws need to be harmonised so that there is free movement of goods and services within the continent,” he said.

He was particularly scathing about the continent’s air services, which he said needed to be improved in terms of connectivity. “Currently to visit some African countries, you have to go via Europe. This is a shame.”

He advocated for “an African Marshall Plan” so that countries could pool resources instead of relying on external funding. “The African Development Bank needs to wake up and lead accordingly,” he said.

Botswana lawmaker Dumelang Saleshando encouraged all African member states to ratify and domesticate the AfCFTA agreement. “It’s critical for us to move together. If we are going to break down trade barriers, it serves no purpose if one member of the chain shows less enthusiasm than the others,” he said.

Saleshando stressed the importance of monitoring and evaluation and advised the SADC PF to promote a culture of regularly discussing trade statistics. “Figures don’t lie,” he said.

Jago Woda Jeremiah Odok, member of the East African Legislative Assembly, underscored the importance of peace and security in making AfCFTA a success. “Without peace and security, there is no chance of trading. Peace is paramount for any development, no matter how rich you are,” she said.

Zimbabwean MP Anele Ndebele described the symposium as an eye-opener.

“AfCFTA is an important vehicle for realising the Pan-African vision of regional and economic integration and structural transformation for Africa’s economy,” he said. DM/MC