A thriving trade has sprung up around illegal mining in Gauteng 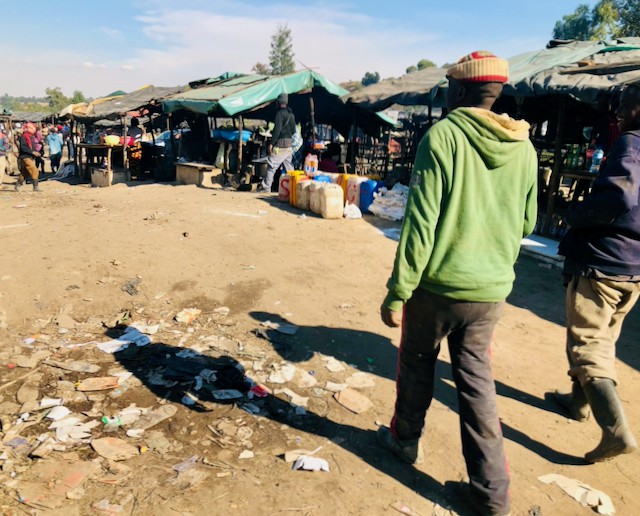 Two miners enter the informal trading market mostly operated by Zimbabwean women and set up near an illegal mine. (Photo: Kimberly Mutandiro)

Immigrant traders supply illicit miners with everything from water to socks and even hazardous elements such as mercury for gold processing.

Between Benoni and Van Ryn is a bushy area with trees where immigrant traders make a living selling goods to informal miners. They supply the miners with everything they need — water, alcohol, torches, batteries, clothes, food and even mercury for gold mining.

But trading here is hazardous. Territorial fights break out between the miners and criminals also target traders. Police stage raids. Sometimes traders are arrested or their goods confiscated.

Among the traders are people from Lesotho, Congo, Mozambique and Malawi, but mostly they are Zimbabwean women.

‘Security’ men from the Congo control entry to the mining area. Vehicles are charged R50 to enter. “This is a business place. Cars don’t come here unless they are carrying merchandise or are out to make serious money,” one of the gatekeepers told us.

There is a rough gravel road, trees and a river where miners draw water for processing gold. The road leads to an old mine and a trading place, a clearing in the bush, where many traders have set up stalls. Miners dressed in their mining gear come and go, buying provisions.

In the surrounding area, some process gold with makeshift phenduka machines (cylindrical machines that are turned by hand). Others eat food at the stalls or play cards and dice as they wait their shift to go and mine.

Rejoice* has been selling to the miners for three years, supplying them with cold drinks, fruits, snacks and beer. She also sells 20-litre water containers to miners who spend days working inside the mine. She keeps her earnings in a small bag tied around her waist. She pays R200 a week to operate her stall to a group of women who are in charge of the trading area. The women pay the security men.

Rejoice starts her day at 8am and finishes in the early evening, commuting from her home in Payneville. At nightfall, most traders hire cars to take their goods home, where they prepare for the next day, which for some begins as early as 5am.

In the morning, she sells breakfast to the miners. In the afternoons, she makes pap.

“It’s possible to make R1,000 on a good day,” she says. “Miners make lots of money from gold and they buy in cash with no hesitation.

“This is how I have been paying rent and sending money to my mother who looks after my child in rural Chipinge, Zimbabwe, for the past three years.”

She says the police tell them selling here is illegal and sometimes they raid and confiscate her goods. “We are always ready to run to nearby bushes to hide. It’s a win-lose situation. What can we do, as there are no jobs out there,” she says.

“We have a special stokvel in which we each bank R200 per day for emergency purposes because doing business here has no guarantees,” she says.

Rejoice says she has witnessed fights between the miners, even heard gunshots.

Betty* from Chimanimani has been selling clothing and other goods to the miners for over five years. She sells umbrellas and gumboots in winter and sun hats in summer. She also has jerseys, socks and other garments. Before the pandemic, she would smuggle Chibuku beer on buses from Zimbabwe and sell it to the miners. On occasion, she extends credit and collects on the weekend when the miners cash in their gold.

She too has lost goods during police raids.

“It’s not easy but life back home in Zimbabwe is tough. Nothing matters more than sending money home to my family,” says Betty.

Carter sells wine and cigarettes. He is from Mozambique but has not been returning home because of the pandemic.

“I once tried to work in the mine but soon discovered that it was too dangerous,” he says. “Only brave people go there. Selling goods here is not bad because it is an environment where immigrants support each other. Ever since l started selling goods here my family has never gone hungry.”

He has also previously sold mercury, used to refine gold, for R250 a “nip”. He said it is smuggled in from Zimbabwe, but he has no stock currently.

“It’s not easy doing business here, but it’s better to make some money than nothing.” DM

*We are only using interviewees’ first names in this article.