Zuma is a ‘recalcitrant, deliberately defiant litigant’ who must be arrested, high court told 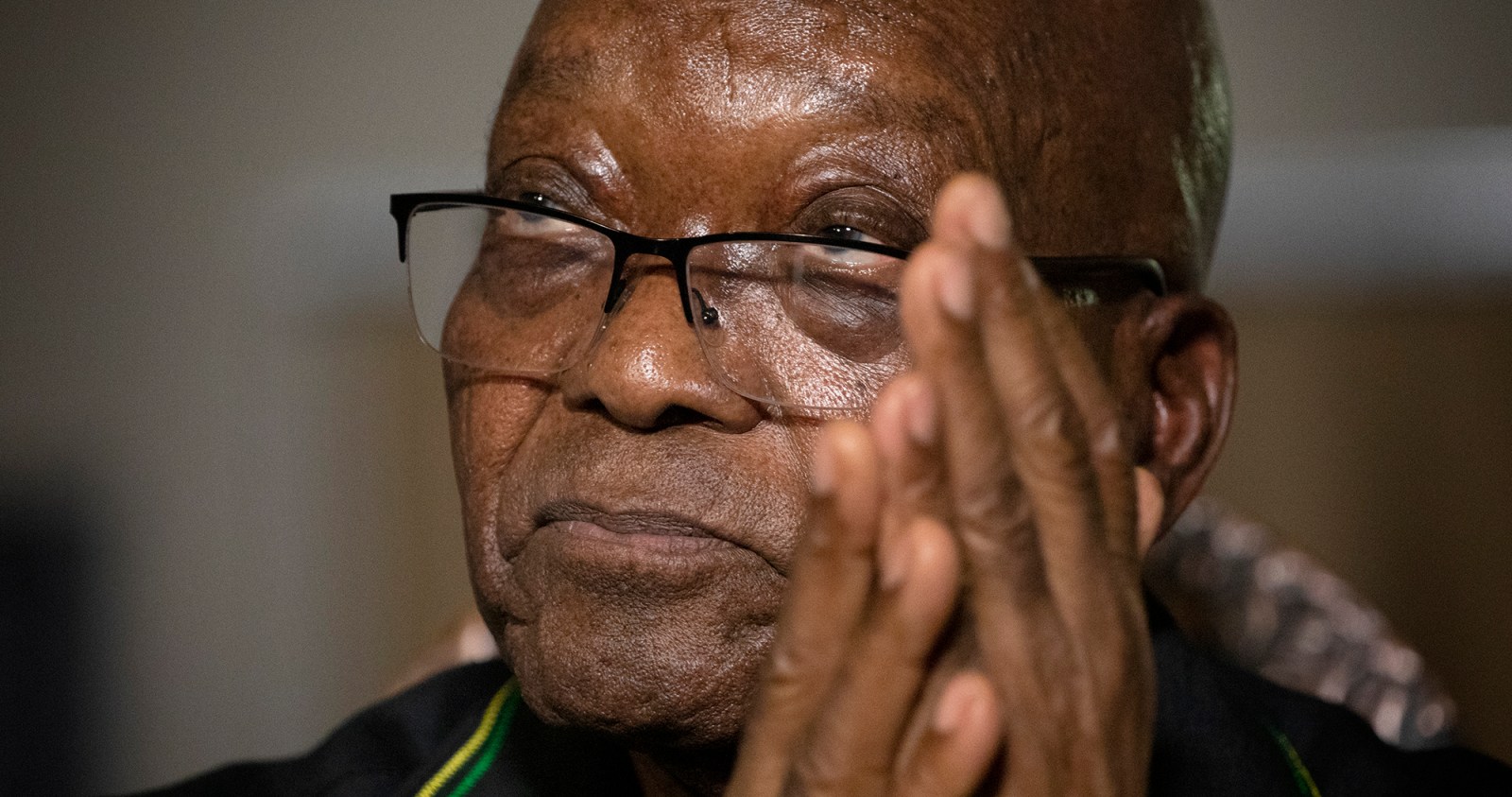 Advocate Tembeka Ngcukaitobi has told the High Court in Pietermaritzburg that Jacob Zuma must be arrested before the clock strikes midnight on Wednesday, 7 July.

Acting for the Commission of Inquiry into State Capture, advocate Tembeka Ngcukaitobi on Tuesday, 6 July, made short shrift of arguments put forward by his legal peer Dali Mpofu in the Pietermaritzburg High Court, as both argued for and against the impending arrest and imprisonment of former president Jacob Zuma.

Arguments ran past 6pm, with judgment reserved until Friday. This means the order for Zuma’s arrest remains in place. Whether police will enforce it, however, remains to be seen.

“Mr Zuma has not handed himself over to police, as he was ordered to do by the Constitutional Court. It is now two days since he was supposed to do that; he is again taking the law into his own hands. He has not asked for the variation of that period before the Constitutional Court,” Ngcukaitobi told Judge Jerome Mnguni during the virtual hearing.

“We are dealing with a recalcitrant, deliberately defiant litigant. He is presently in defiance of the present contempt of court,” said Ngcukaitobi.

This view was shared by Max du Plessis, acting for the Helen Suzman Foundation. Du Plessis was adamant: the high court could not interfere with an order made by the highest court in the land.

The Constitutional Court on Tuesday last week sentenced Zuma to 15 months of direct imprisonment for being in contempt of its order earlier this year that he must appear before the Commission of Inquiry into State Capture.

He was given until Sunday to hand himself over, failing which the minister of police and national commissioner of police would have to ensure that he was arrested by midnight on Wednesday.

On Friday, Zuma filed an application with the apex court seeking rescission.

He has cited his “health condition”, the Covid-19 pandemic being a potential death sentence at his age of 79, being financially disenfranchised, and that he received poor legal advice as reasons why he should not be incarcerated.

The court responded the following day that it would hear his arguments on 12 July.

Also on Friday, he filed the urgent application with the high court seeking that his arrest be stayed.

It was the confusion around his arrest possibly being stayed, albeit by a lower court, and the prospect that he may still be arrested, that led to the chaos outside his Nkandla homestead over the weekend during adjusted Level 4 lockdown restrictions.

As reported by Daily Maverick, hundreds of supporters, mostly without masks or physical distancing, dozens openly drinking, some with firearms, others discharging firearms, some provoking police, gathered outside the former president’s home to “protect” him from arrest.

The State Capture Commission and its chairman, recently appointed acting Chief Justice Raymond Zondo, opposed Zuma’s application to stay or interdict his arrest, as did the Helen Suzman Foundation, which had been admitted into initial proceedings as a friend of the court.

Ngcukaitobi told Mnguni the matter being dealt with was a “grave” one, as Zuma had continually defined himself outside the structures of the law and the ambit of constitutional authority.

The Constitutional Court judgment had made it “clear” that Zuma was guilty of contempt, said Ngcukaitobi.

It was simply not permissible for the high court to suspend an execution order from the apex court. Other options were available to Zuma, he said. The former president could approach the Constitutional Court to suspend the order for his arrest.

Apart from there being an alternative remedy available, said Ngcukaitobi, there were “very strong reasons” why what was being sought at the high court should have been argued before the Constitutional Court:

Ngcukaitobi also said it was “nonsensical” that Police Minister Bheki Cele and National Police Commissioner Khehla Sitole had opted to file notices to abide, because they were seeking clarity from the court.

In a letter to the Constitutional Court on Tuesday, on behalf of Cele and Sitole, the state’s attorneys said that the “pending litigation has a direct impact on the action which they should take in terms of the court order on the basis that the very court order has become the subject of litigation in both courts”.

“In view of the unique situation presented by the developments and the legal matrix involved, our clients will, out of respect of the unfolding litigation process, hold further actions they are expected to take in terms of the Honourable Court’s orders in abeyance pending the finalisation of the litigation, alternatively, pending any directions the Honourable Acting Chief Justice may possibly issue regarding the conduct of the litigation and any other related matter related to the litigation,” read the letter.

But Ngcukaitobi told the judge that Zuma must be arrested before midnight on Wednesday.

“If court orders can be disobeyed, at will and without consequences, the Constitution will be reduced to a mere paper tiger.”

The threat of violence that was hinted at in Zuma’s replying affidavit, and the fact that the police had taken into account a security assessment, “should not detain us, nor should they dictate what the correct legal position ought to be”, said Ngcukaitobi.

Mnguni had openly expressed that he was not comfortable with what he was being asked to rule on. “That is actually the discomfort that I had. If, for instance, I issue this order, what does it say about the ConCourt order?”

Du Plessis and Ngcukaitobi were in agreement in their arguments, with the former telling Mnguni that nowhere was there a case of a high court interdicting an order from the final arbiter. Zuma was also not entitled to special treatment, Du Plessis said.

Arguing for Zuma, Mpofu told Mnguni that his client had not asked the Constitutional Court to stay the execution of his arrest pending next week’s hearing because he did not have the finances to indulge in unnecessary litigation.

“That is what got him into this soup in the first place,” said Mpofu. The judge had asked why Zuma did not approach the apex court to stay his arrest instead of applying to the high court.

Mpofu responded that the prospect of gaining direct access to the Constitutional Court to hear the matter on an urgent basis was “slim”.  Besides, he said, Zuma had no way of knowing that it would agree on Saturday to hear the rescission application that he only filed on Friday.

Mpofu milked the fact that the authorities were standing aside, while the commission and Helen Suzman Foundation were seeking to oppose Zuma’s application. The foundation had “no business” in the high court proceedings, said Mpofu, adding that it, Zondo, and the commission were “peripheral parties”.

“The police, commissioner and department of justice and corrections are the main players,” he said. The opposing parties were “uninvited busybodies”.

Law enforcement was not opposing the matter because they were aware of how it had “provoked the interest of many people”, he said.

“If parties that are constitutionally empowered to assess the security situation and execute the warrant decided to hold it in abeyance, then what business is it of NGOs and some commission… to travel all the way to Pietermaritzburg” to oppose what the constitutional bodies were not opposing.

Zuma had said in his responding affidavit that it was the show of force at Nkandla and the “risk of another Marikana massacre” that led to state institutions not opposing his application. He said the “volatility of the situation has been quelled by the sensible approach” of those not opposing.

Mpofu again alluded to this in court.

He also dismissed the arguments put forth by the “busybodies” that the high court did not have jurisdiction over a Constitutional Court order. All high courts in South Africa had inherent jurisdiction, he said, and jurisdiction of other provincial courts, in arbitration, and had foreign jurisdiction.

“There is no contestation of jurisdiction with a high court,” he told Mnguni, adding: “You have jurisdiction to issue a suspension order.”

While Mpofu tried to bring in other arguments, the judge made it clear that jurisdiction was the pivotal issue.

“Put yourself in the shoes of the applicant when he is ultimately successful in the rescission application and ask yourself, My Lord, whether he would have received effective and adequate relief if two or three months down the line he would have been sitting in a prison cell. The answer is an obvious no.

“That is the nature of the proceedings before you and that should compel you, based on a just and equitable manner, based on anything, based on interest of justice, based on the public interest, considerations which must have been taken into account by the non-opposing respondents, based on justice and the operations of the laws, and based on simply justice, Your Lordship has to grant the order asked for.” DM