Mobile clinics and loudhailers: Getting people in rural areas vaccinated 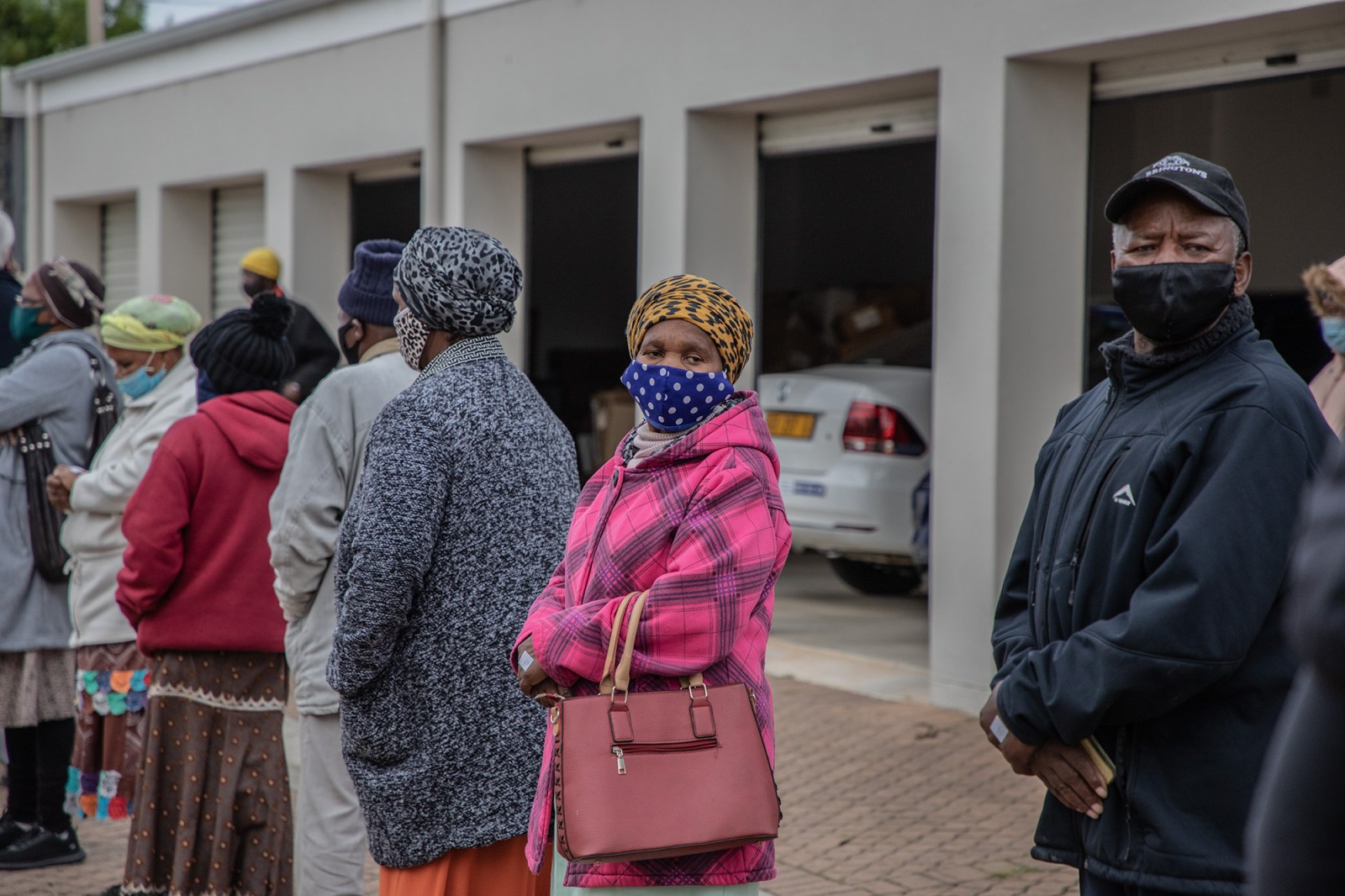 People queue for their Covid-19 vaccinations outside Kwanokuthula vaccination site near Plettenberg Bay on the morning of 24 June 2021. (Photo: Victoria O’Regan)

Better communication and access to vaccination sites in rural areas are concerns in Bitou Municipality as the vaccination process continues for the elderly.

Retired nurse Aronda Barkhuizen from the Bitou Municipality says that to vaccinate people in rural areas the government must “use a mobile clinic”.

Barkhuizen met Daily Maverick at the Kwanokuthula Community Day Clinic (CDC) in the Bitou Municipality (Plettenberg Bay and surrounding areas) where she received her vaccination. She had brought along some of her neighbours at 6am to wait for their jabs.

Barkhuizen worked as a nurse in Wittedrift, a remote part of the municipality, before retiring in March. She registered for her vaccination at the beginning of June via the Electronic Vaccination Data System (EVDS).

Although she did not have an appointment, she decided to go to the walk-in line for her vaccination. When she arrived at the clinic there were about 20 people waiting in line.

“Use a mobile clinic,” in remote areas, she said. “Take the mobile clinic to certain points.” This would help pensioners in areas like Wittedrift who had to pay as much as R100 for private transport to vaccination sites. “For a pensioner, that’s a lot of money.”

Nurse Lusindiso Lumkwana, a vaccinator at the clinic, said more white people than black people were coming for their jabs.

“I don’t know if the black people have knowledge about this vaccine,” she said. “They must send someone in the location [township] to tell our people, even the youth, to educate them to register their mothers because they say they don’t have an idea how to register.”

Lumkwana also suggested having people drive around in rural areas using loudhailers to give information about accessing Covid-19 vaccines.

“With this vaccine, people are very excited,” she said.

The People’s Vaccine Campaign (PVC) says it is “deeply troubled by class discrimination in the vaccine roll-out… this is related to income and language and has race discrimination implications too.

“The EVDS registration system requires a phone or online access, which many older people don’t have if they are poor, and it requires knowledge of English, which unfairly discriminates against a large proportion of people whose first language is not English, especially if they are old and poor.”

During Daily Maverick’s visit, the walk-in line was much longer than the line for people who had scheduled appointments via the EVDS.

“People with a car find it relatively easy to drive around until they find a site with a small queue where they can get a walk-in vaccine injection (at least in urban areas). In contrast, there are very many cases where poor people cannot get to a site because they cannot afford the transport,” said the PVC.

Nadia Ferreira, the principal communications officer for the Garden Route and Central Karoo districts at the Western Cape Department of Health, told Daily Maverick that aside from registering via the internet, people could register for vaccination via WhatsApp.

In addition, Ferreira said, “We have engaged all stakeholders (municipalities, NGOs, private) to increase sites and places where the public are able to register. We are able to register people at all healthcare facilities. We also have communication campaigns to implore communities to assist those over 60 with registration, especially the youth to assist their elderly.”

When asked about reaching far-flung places such as the villages of Wittedrift, Covie and Kurland, Ferreira said: “We have organised transport for people from Wittedrift who have registered to receive their vaccinations in town or at Kwanokuthula CDC. Kurland and Covie patients visit their local clinic, Crags clinic, for registration and vaccinations.”

The head of the Kwanokuthula clinic, Dr Anel Scholtz, said that because the clinic gets a limited amount of vaccines, vaccinators sometimes have to tell people to go back home, even when they come from far-flung areas.

“It’s tough to send them back, but I think the majority of people want to do this [get vaccinated].”

Koenraad Stuurman (71) from Wittedrift said he heard about vaccinations on radio and television. His son, who lives in Cape Town, had registered him for his vaccination via the EDVS.

“I’m very happy,” said the pensioner after getting his vaccination.

When asked by Daily Maverick what he would tell other elderly people who still need to get registered, Stuurman said: “I’ll encourage them; I think it’s the best choice to take it.” DM