Give the private sector free rein: Lessons for South Af...

Give the private sector free rein: Lessons for South Africa from the US economic recovery 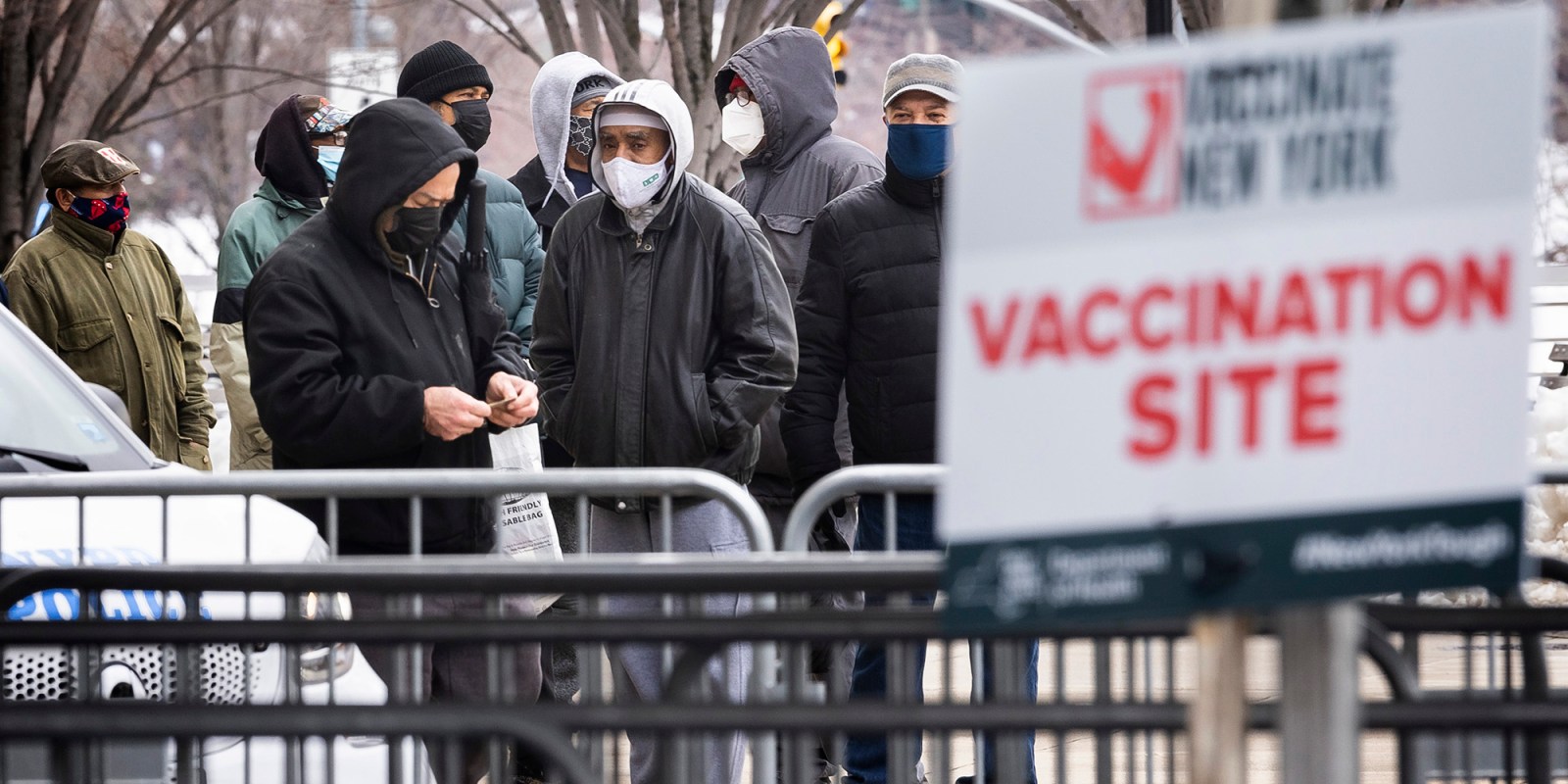 People wait in line for a Covid-19 vaccination at Yankee Stadium in the Bronx, New York. (Photo: EPA-EFE / JUSTIN LANE)

The near spectacular recovery of the US economy holds a number of important lessons for South Africa, one of which is to have an effective Covid-19 vaccination programme.

Roelof Botha is the economic adviser to the Optimum Investment Group.

According to the IMF, the world’s largest economy is expected to grow at 7% this year, a substantial upward revision from its April forecast of 4.6% growth. The fund also raised its 2022 forecast for GDP growth in the US to 4.9%, up from 3.5% previously.

These predictions are marginally more optimistic than those of the Congressional Budget Office (CBO), which were also announced on 1 July. This office, which is nonpartisan, predicted the economy would grow at 6.7% in 2021, which would be the fastest annual growth in the United States in 37 years and significantly higher than the forecasts of three months ago. 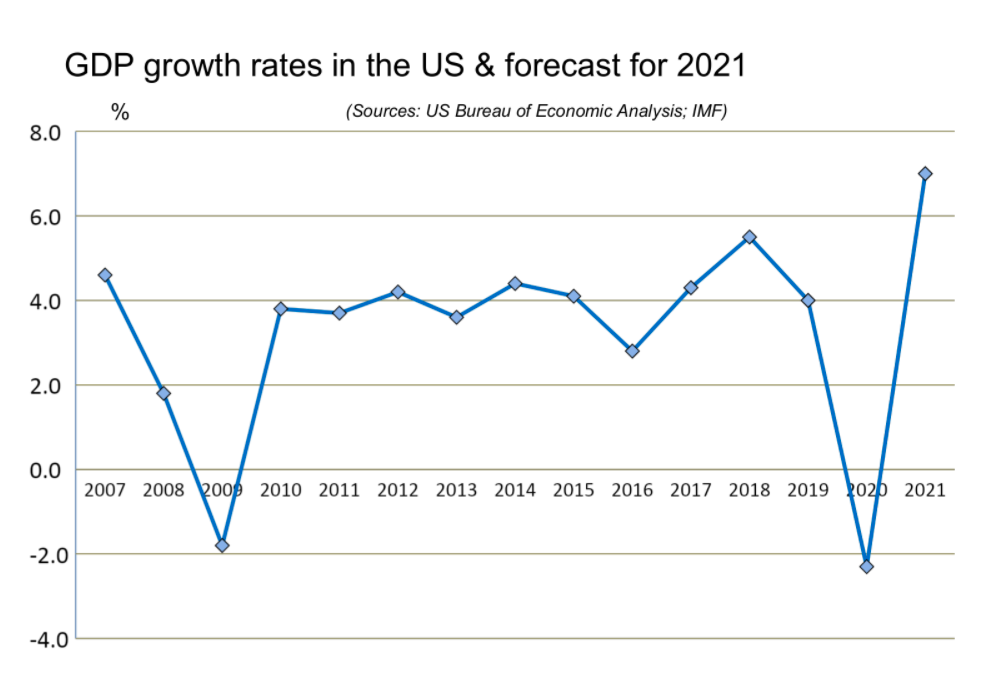 Lesson number one is to appreciate the inherent logic of Keynesian economic theory, which was designed for a situation such as that induced by the pandemic. President Biden cannot claim all the credit for the latest round of fiscal stimulus, as it started under the Republican Party’s administration and is based on sound macroeconomic principles.

When the economy takes a turn for the worse and unemployment rises, it is appropriate for a responsible government to take steps aimed at mitigating the effects of a recession. In countries with a sufficient level of fundamental macroeconomic stability, this can be done via a combination of direct transfers to unemployed people and increased government expenditure on the maintenance and expansion of infrastructure — exactly what is happening in the US.

Whether a country’s budget deficit/GDP ratio approaches or exceeds parity in these circumstances is irrelevant, as the policies of anti-cyclical fiscal demand management will eventually lead to economic recovery and a broadening of the tax base — hence the acceleration of new jobs in the US (850,000 in June alone).

According to the CBO, the unemployment rate is estimated to fall below 4% next year and remain historically low for years to come, a marked improvement on its prediction in February that unemployment would not fall below 4% until 2026.

Lesson number two involves the role of an effective vaccination campaign in aiding the swift return to a large degree of macroeconomic normality in the US. As of 3 July, the US had already fully vaccinated almost 50% of its population.

Developing economies such as Chile (56%), Uruguay (50%), Singapore (38%) and Morocco (26%) have also made good progress, but South Africa’s paltry 0.8% reflects a sorry state of affairs in the government’s handling of the vaccination programme.

To put this dismal figure in perspective, it is worth noting that South Africa boasts the most sophisticated and wide-reaching health system in Africa. The country is privileged to have a total of 2,700 pharmacies, 3,840 public clinics, 420 public hospitals and 200 private hospitals.

In the event of vaccinating 12 people per hour at only half of these facilities, it would take less than three months to provide everyone over the age of 30 with at least the first jab of the Pfizer-BioNTech vaccine.

The US obviously possesses a highly efficient health system that operates essentially on nonpartisan principles within a system grounded in meritocracy. Attaining herd immunity from the Covid-19 virus is without doubt the country’s single most pressing short-term priority, and the South African government should acknowledge the shortcomings of its approach towards its vaccination campaign.

It will require a bold approach involving the whole of the private healthcare system and as many private sector donors for purchasing vaccines as possible.

The third lesson is to realise that the strength and resilience of the US economy, which boasts a GDP per capita of close to one million rands, has been made possible by the long-standing institutional enshrinement of free enterprise and an environment that nourishes venture capital formation.

It has become a matter of urgency for the South African government to place a moratorium on the plethora of regulations that stifle business development, especially those that involve cadre deployment, nepotism and racially based quotas for equity in companies.

Transformation of the South African economy should be allowed to occur with due regard to more pressing objectives, such as higher economic growth, job creation and poverty alleviation.

The most effective manner to attain these goals is to allow the private sector maximum leeway in expanding its business operations and to cooperate with business leaders in identifying and removing obstacles to job creation.

Fortunately, clear signs are emerging that the Ramaphosa administration appreciates such a strategy, as shown in the establishment of master plans between government, labour and business for a growing number of key sectors of the economy.