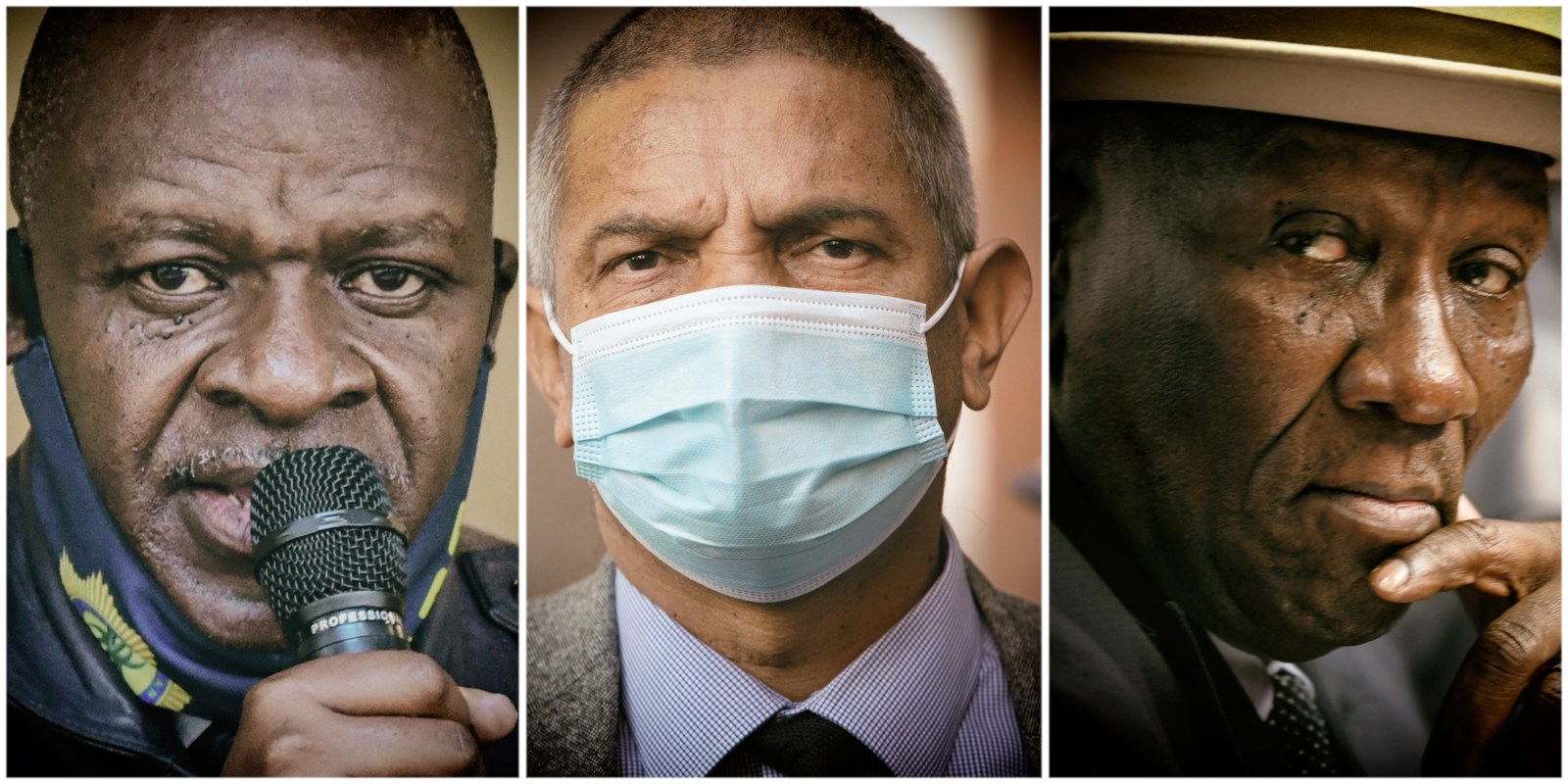 ‘It cannot be excluded that the purpose of withdrawing my protection is to discourage me from testifying in high-profile criminal matters scheduled to take place as a result of my investigations,’ says veteran policeman.

Former Western Cape Deputy Provincial Commissioner (Detective Services) Jeremy Vearey has told the Western Cape High Court that there is a real and imminent threat to his life.

Vearey on 5 July submitted an urgent application to the Western Cape High Court to have a decision by Provincial Commissioner Tembekile Phathekile to remove Vearey’s security reviewed and set aside.

In an affidavit, Vearey stated that the removal of his security after his dismissal by Sitole in May would jeopardise his testimony in upcoming high-profile “guns to gangs” criminal matters.

“It cannot be excluded that the purpose of withdrawing my protection is to discourage me from testifying in high-profile criminal matters scheduled to take place as a result of my investigations.

“My change in employment status does not change the prevalence of the threats against myself,” said Vearey.

The veteran officer further claimed that there was an orchestrated strategy by senior SA Police Service (SAPS) management to “get rid” of himself, Major-General Peter Jacobs and Major-General André Lincoln.

“We exposed corruption in the police and we diligently committed ourselves to the eradication of gang activities and police corruption. I respectfully submit that my dismissal is none other than a method to achieve ulterior motives of senior police management,” said Vearey.

Patekile announced on 24 June that Vearey’s security was to be withdrawn.

In his request for the court for a condonation for late filing, Vearey said he had been hospitalised and placed on a ventilator for Covid-19 symptoms and had been unable to prepare an affidavit earlier.

It was while he was in hospital, said Vearey, that Jacobs had informed him that his protection had been removed. Emails to Cele and Sitole had gone unanswered, he said.

“The urgency of the matter is that my life will be in real danger should I be discharged from hospital in the course of this week,” said Vearey.

Vearey said that the threats to his life had “a long and chequered history” and that about five years ago he had been officially informed by Crime Intelligence that “threats on my life have been identified”.

These emanated from criminal gangs “and even police officers”. The SAPS had provided him with four bodyguards and appropriate transport to secure his safety.

“The threats emanate from my duties and responsibilities as the Deputy Provincial Commissioner (Detective Services). The suspects identified by me were high profile gang members and corrupt police officers.”

Vearey, who was instrumental in re-establishing the Anti-Gang Unit (AGU) in the Western Cape, said that the “unbundling and arrest of leaders of criminal syndicates who were/are involved in smuggling of firearms from SAPS to gangs on the Cape Flats” placed his life at risk.

Known as Operation Combat, this action, he said, had been initiated by himself alongside Jacobs and Lincoln.

He set out how in 2013 he had instructed a member of Operation Combat to follow up information that SAPS and SA National Defence Force (SANDF) firearms were being sold to gangs in the Cape Flats.

Z88 police pistols and LM6 and AK-47 assault rifles had been confiscated from gangs.

“The Z88 and the assault rifles were linked to the SAPS Silverton store. I launched Operation Impi during 2014 as an extension of Operation Combat. It was a covert operation with a selected few who were privy to the operation,” said Vearey.

The investigation led the team to the SAPS headquarters in Pretoria.

“A Colonel Prinsloo who was the Provincial Head of Firearms Control in Gauteng told us that about 2,000 guns from the SAPS stores were missing from where the thousands of firearms earmarked for destruction were kept,” said Vearey.

Some of these arms had been sold on the Cape Flats and SANDF weapons were sold to arms dealers. In January 2015 these weapons were linked to more than 1,000 gang murders and many more attempted gang murders.

On 21 June 2016 Prinsloo was convicted of multiple charges, including racketeering, corruption, theft, and selling or supplying ammunition to unlicensed persons.

“In a plea agreement, he was sentenced to 46 years’ imprisonment, 18 of them effective provided he would cooperate with us to identify more senior police officers who were involved in the proliferation of firearms,” Vearey revealed.

In the same month, Jacobs and Vearey were demoted and removed from their provincial posts, the Operation Combat Team was disbanded and its members transferred. The demotions were later set aside.

“The lawyers representing the person who was the conduit for guns, Noorudien Hassan and Advocate Pete Mihalik, were assassinated during August 2016 and October 2018,” said Vearey.

While Hassan’s murderer had not yet been apprehended, the murder trial of the three suspects in the Mihalik matter was ongoing.

“I can, for obvious reasons, not disclose in this affidavit whether the guns-to-gangs matter caused the assassinations of Hassan and Mihalik,” said Vearey.

One of Vearey’s biggest successes in 2015 was the conviction of George “Geweld” Thomas, leader of the feared 28s gang, for “almost unspeakable acts of violence”. Thomas received seven life sentences after being convicted of more than 50 charges, including murder and extortion.

“Crime Intelligence alerted me that I was a target of the 28s as a result of the conviction of Geweld,” said Vearey.

With the appointment of Lieutenant Khombinkosi Jula as Western Cape provincial police commissioner in 2016, three of his deputies had been dismissed.

“He replaced them with juniors whom he had promoted from KwaZulu-Natal. I became a witness in arbitrations and legal proceedings that followed. Two of the deputies were reinstated,” said Vearey,

Before this, Jacobs, then still provincial commander of Crime Intelligence, had warned Vearey “of a new threat made against me. Two gang hitmen, with an AK-47 assault rifle and a sniper-scoped hunting rifle, were arrested.”

Vearey said instructions had been issued to assassinate himself along with a prosecutor and a judge.

“The gang leader had links with prominent politicians, one of whom wrote a letter in mitigation of sentence for one of the leaders’ hitmen. The information used to monitor me had come from corrupt police officers. I was then placed under police guard.”

Vearey said that one of the suspects the Anti-Corruption Unit had investigated was Nafiz Modack, “the owner of a security company which exploits night clubs and restaurants by rendering security services”.

Modack was arrested and had been “unlawfully released from custody after being detained on charges of armed robbery and malicious damage to property”.

Vearey claimed that the AGU had found evidence of telephonic contact “between senior officers in the SAPS provincial management and an officer of the Hawks while he [Modack] was in custody. His release followed after he made calls to his police contact.”

During 2017 Vearey said he was informed that Modack had sought “to speak to me about senior police officers who wanted him [Modack] to register false cases against me”.

During this meeting Modack had played a recording of a conversation between Modack and “a Lieutenant-General whose voice I recognised” about “a collection of statements that would implicate me in the unlawful seizure of his company firearms”.

Vearey claimed that Modack had said the false statements would be used to allege that he was working for Mark Lifman and Jerome Booysen.

“It is also a well-known fact that Major-General [Mzwandile] Tiyo (the current Crime Intelligence boss in the Western Cape) has links with Modack. Tiyo is involved in the Rogue Unit referred to in Kinnear’s report,” claimed Vearey in his affidavit.

Cele’s words after Kinnear’s murder that the SAPS “could have done things better” and that issues were serious “were all in vain”, said Vearey.

“I as the Provincial head of detectives gave instructions to Kinnear to investigate the guns to gangs matter, the Advocate Pete Mihalik murder case and the Modack charges. Notwithstanding that and the information from the Hawks that my life is in danger and that I must be eliminated, the respondents see fit to terminate my protection.”

Vearey said he and his family had a right “to inherent dignity” and “a right to life and the right to just administrative action that is lawful, reasonable”.

Sitole and Phathekile have until 7 July to provide a notice of whether they intend to oppose the application, until 9 July to file answering affidavits, and until 12 July to receive Vearey’s reply. DM