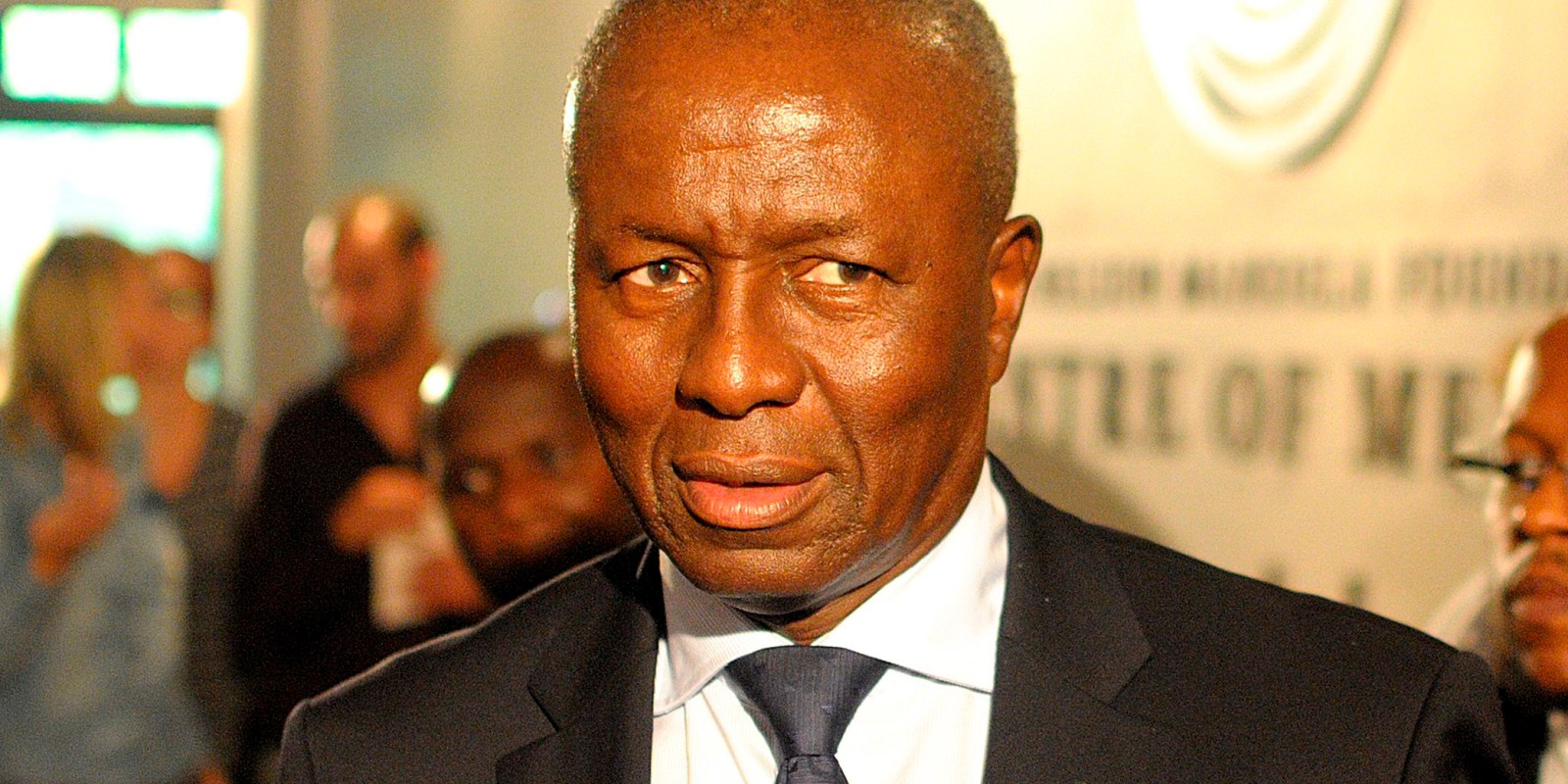 Former Chief Justice Dikgang Moseneke has been burdened with the unenviable task of probing whether October’s scheduled municipal elections will be free and fair. After a week of listening to opinions from various spheres of the country, his subsequent report will guide the electoral commission on whether to hold or postpone the upcoming election.

Balancing the right to life and the democratic right to vote is the conundrum facing former Deputy Chief Justice Dikgang Moseneke after being called upon by the Independent Electoral Commission (IEC) to launch an inquiry on whether October’s municipal elections will be free and fair during the Covid-19 pandemic.

From Monday to Friday last week, political parties, civil society groups, health experts, trade unions and government came before Moseneke to argue their stance on whether elections should go ahead as scheduled.

While one camp was adamant elections should take place in October as per the Constitution, the other camp contends that apart from being a super spreader event, non-pharmaceutical interventions would limit the extent to which elections could be free and fair.

Section 159 of the Constitution states “the term of a municipal council may be no more than five years”. It also sets a 90-day window on either side of the last poll for the next elections.

Sy Mamabolo, the IEC’s chief electoral officer, kicked off the first day of proceedings by refuting claims that the Commission would go ahead with October elections at all costs.

“We want to reiterate that we are technically preparing for an election because of the constitutional requirement for regular elections. That does not amount to the IEC saying an election cannot be postponed in any circumstances.”

The IEC launched elections on 9 June and voter registration is scheduled for 17 and 18 July.

Feedback from the inquiry will be drafted into a report which, according to Mamabolo, will assist the commission in determining whether elections will be free and fair.

Mamabolo said an election can only be postponed under two circumstances: The first scenario would be to approach the electoral court to request a postponement of the elections beyond the 90-day period. The second scenario is seeking a Constitutional amendment.

ANC deputy secretary-general Jessie Duarte said the party was against an amendment as it was a “permanent solution” to a “temporary problem” and would have the “unconstitutional” result of extending councillors’ terms in office.

In the climate of Covid-19 and the poor state of local government across the country, concerns were raised that postponing the elections could result in service delivery protests.

The ANC was of the view that October elections should go ahead unless the pandemic “reaches much more critical proportions by October” in which case a postponement should be until the beginning of December or latest February 2022.

The Economic Freedom Fighters (EFF) on the other hand want elections postponed to April 2022. Party president Julius Malema referred to last week’s postponement of by-elections in eight wards as well as by-election postponements in 2020 as evidence that deferment was a possibility.

He said, should elections proceed in October, the party would be forced to “defy the lockdown” in order to campaign for votes.

The Democratic Alliance (DA) was of the firm view that elections should happen in October “come hell or high water”. The DA’s Werner Horn argued that forgoing traditional campaigning methods such as rallies because of the prohibition on mass gatherings did not infringe on the right to campaign. Parties could make use of other means such as telephone canvassing, poster messaging, printed manifestos, as well as the media.

But several parties in the pro-postponement camp such as the IFP said that canvassing through digital means such as social media would disadvantage the electorate in poorer communities, rendering the campaigning process unfair.

The IFP proposed the election be postponed to May 2022.

Mamabolo explained that under the conditions of a free and fair election, political parties and candidates should be able to compete with one another on relatively equal terms.

In addition, political parties and candidates should be free to canvass, advertise, and “engage in the activities normal for a person seeking election”.

Several arguments were made that the Independent Communications Authority of South Africa (Icasa) should scrap its proportional representation criteria when offering free television and radio advertising slots to political parties. The Party Election Broadcast slots (Pebs) which run for six to eight weeks prior to elections offer parties airtime based on the number of seats they hold.

There were concerns that holding an election in October would result in low voter turnout due to fears of infection at voting stations. President of Al Jamah-ah, Ganief Hendricks said South Africa should follow America’s example of allowing postal votes which, in their case, increased voter turnout.

Extending the number of voting days was another possibility, as was allocating voting days based on age or, as the ANC suggested, allowing those over 40 years old to use special votes.

Mamabolo, pointed out that this would require additional budget from the IEC to ensure security for ballot boxes as well as tent hire and additional voting materials. He also said extended voting days might hamper the freeness and fairness of the election as election results should be announced within a period that is as short as reasonably possible.

Regarding the IEC’s budget, Mamabolo said the pandemic has resulted in additional unbudgeted costs such as PPE for voting officials and other protective aids for the upcoming election, with a total cost of more than R129-million.

Voter registration weekend could also be postponed by at least ten days after the current lockdown restrictions according to the DA.

New parties such as Us the People, took the oral submission process as an opportunity for political grandstanding. Convenor of the party, Kemokoenawamathole Mathole expressed Covid-denialism saying the virus was a “political tool” and a scam being used to collapse the economy and suppress the right to vote.

“Us as the people we never saw the virus. It is a ghost, it is behaving like a Holy Spirit, we haven’t seen it,” he said.

Similarly, president of the Party Of Action, Billy Nyaku, said Covid-19 was a “biological weapon” and expressed his parties anti-vaxxer stance.

Meanwhile, scientists and health experts warned that the country might be experiencing a fourth wave of infections by October. Dr Fareed Abdullah, a director of the SA Medical Research Council, said the current slow pace of the vaccine roll-out meant new infections and variants would likely emerge before the year is over.

Based on data from the first and second wave, Abdullah said the fourth wave could start in the first two weeks of October “and would be well established in the exponential phase by the last week of October”.

The third wave which is being driven by the highly infectious Delta variant is predicted to be over by the end of August according to Professor Salim Abdool Karim, but this is dependent on whether new variants emerge and whether the public adheres to health protocols.

With the current pace of the vaccine roll-out, Abdool Karim said the gold standard of population immunity would not be reached by October.

Director-General of the Department of Health, Sandile Buthelezi, said the AstraZeneca and Pfizer vaccines were most efficacious against the Delta variant, with Pfizer being most effective. This was supported by data presented by the Ministerial Advisory Committee on Covid-19 which showed a single dose of Pfizer offered 94% protection while two doses offered 96%.

Buthelezi said the government was ramping up the vaccine roll-out to record 200,000 inoculations per day by October but is currently at approximately 107,000 daily vaccinations.

The desired population immunity of 67% (40 million people) would likely be reached by February next year.

Buthelezi expressed concerns that activities in the run-up to the election such as voter registration and campaigning would occur during the third wave and indicated that the country might still be under a stricter lockdown between August and September.